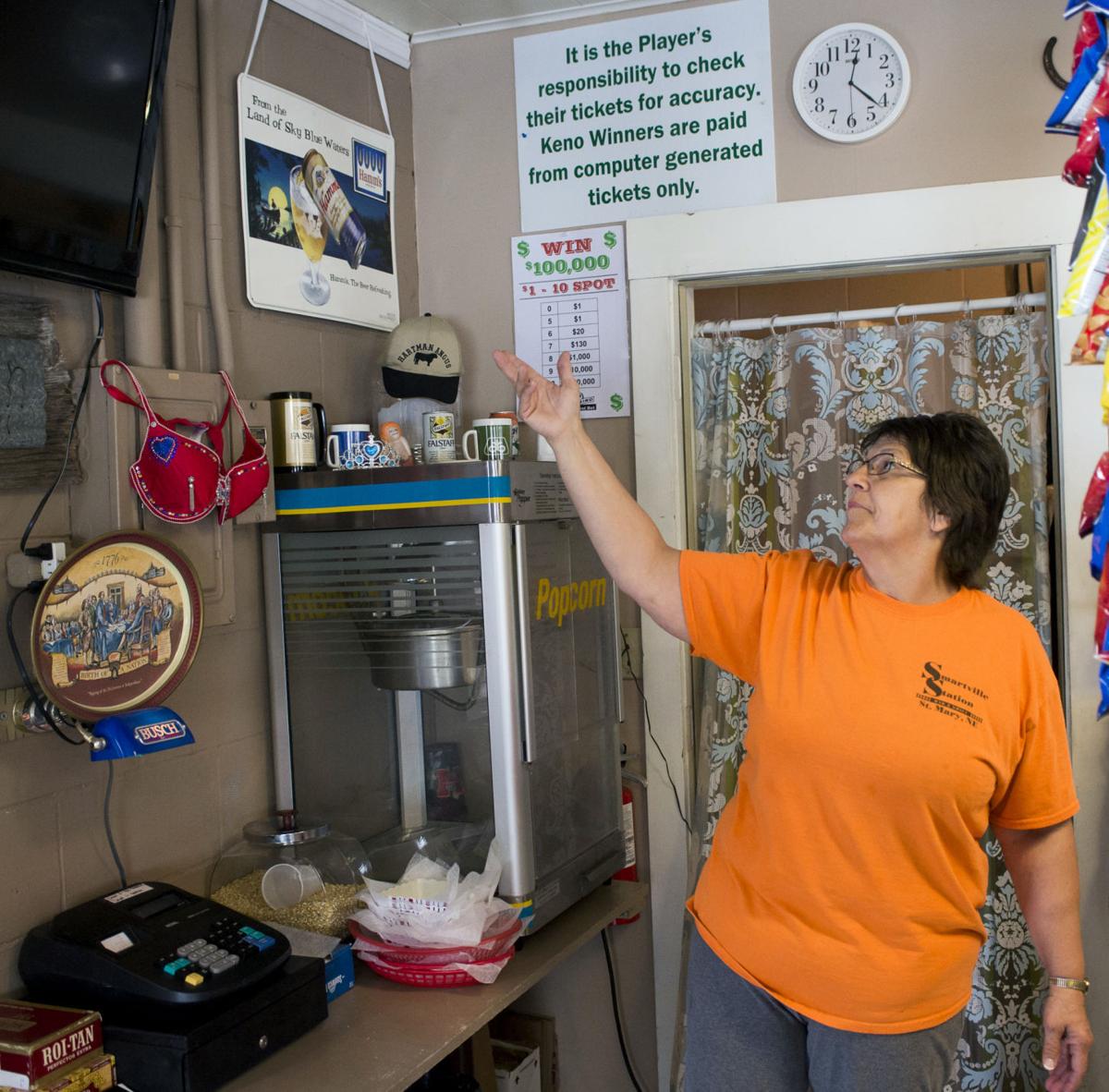 Susan Goracke says her bar, Smartville Station in St. Mary, is struggling since a keno machine was shut down after a Halloween night malfunction. 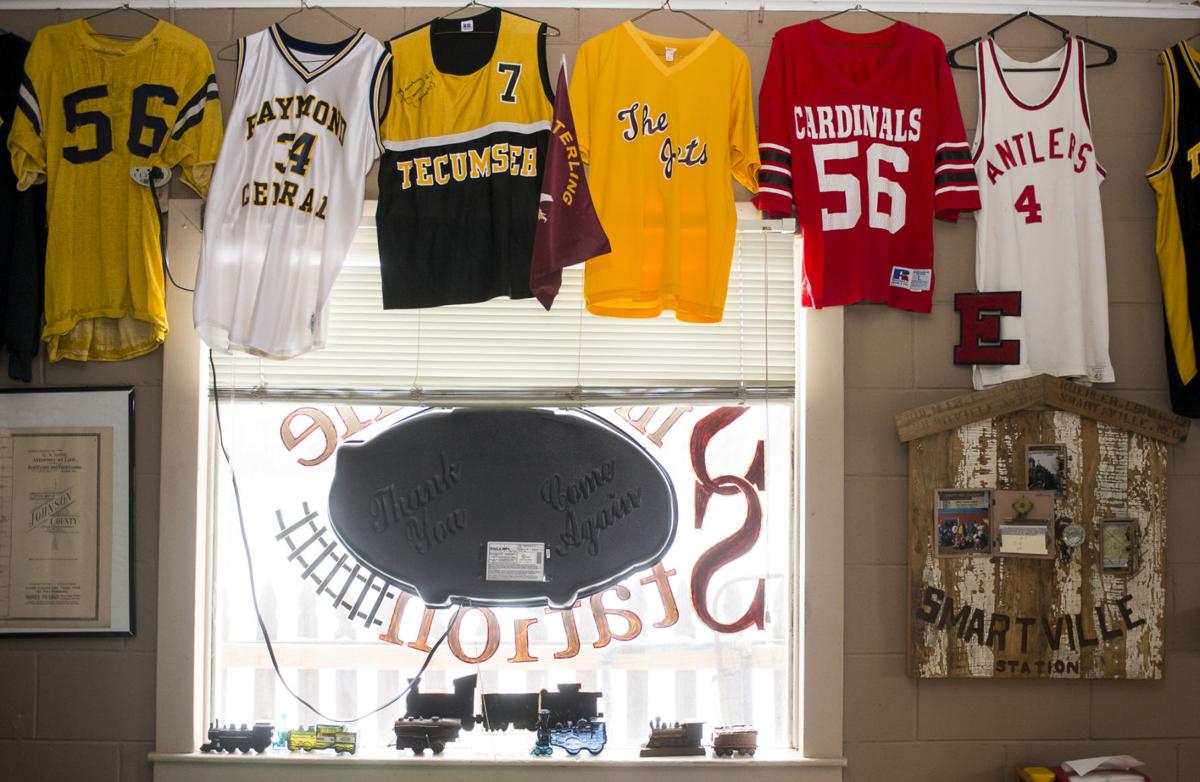 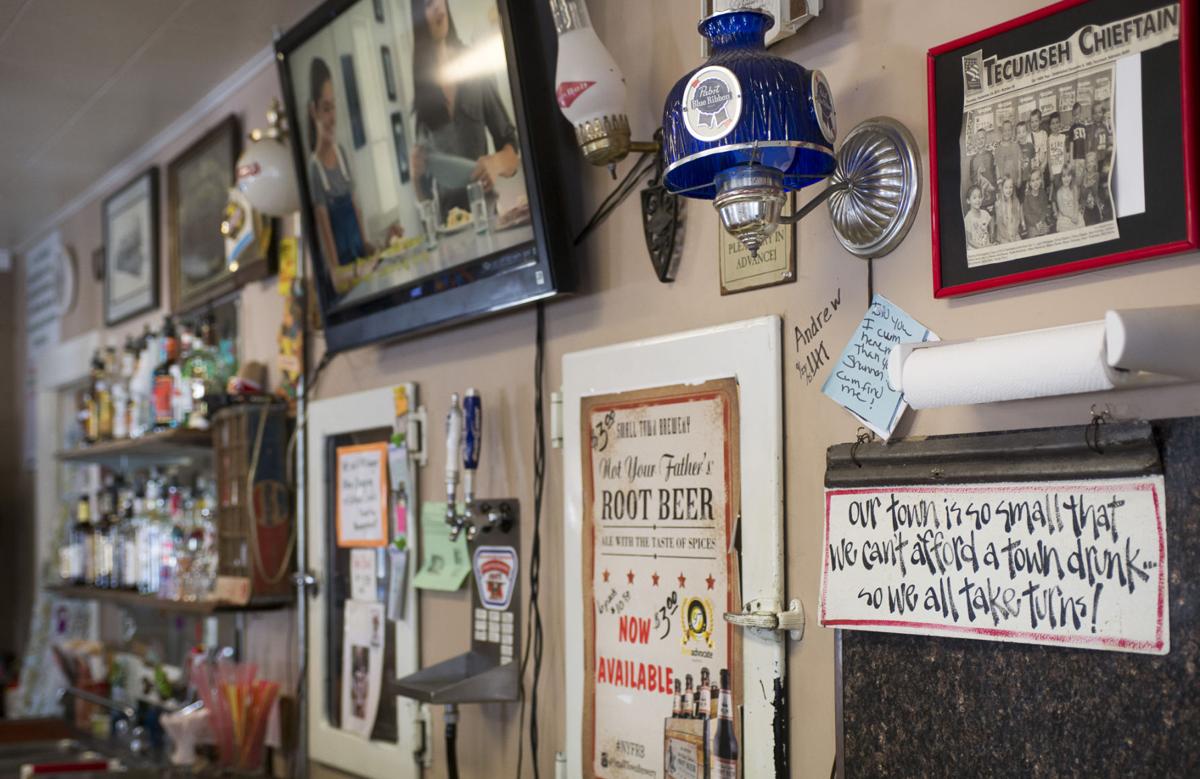 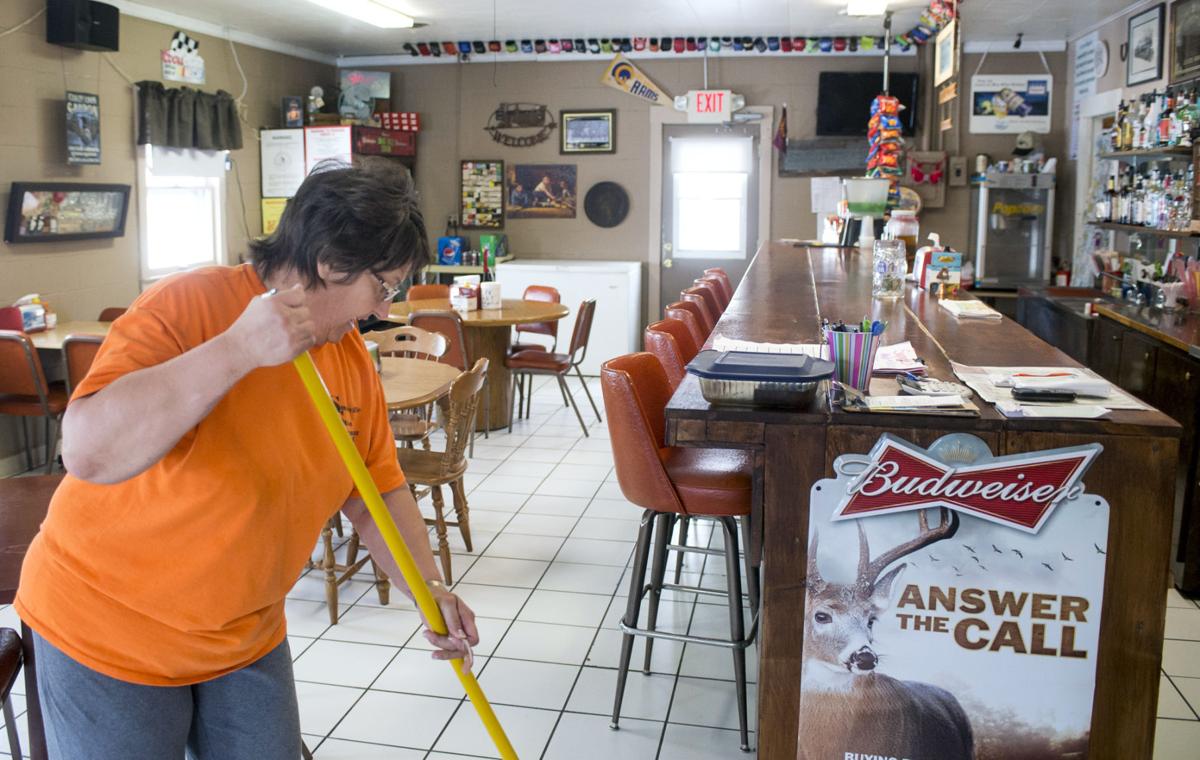 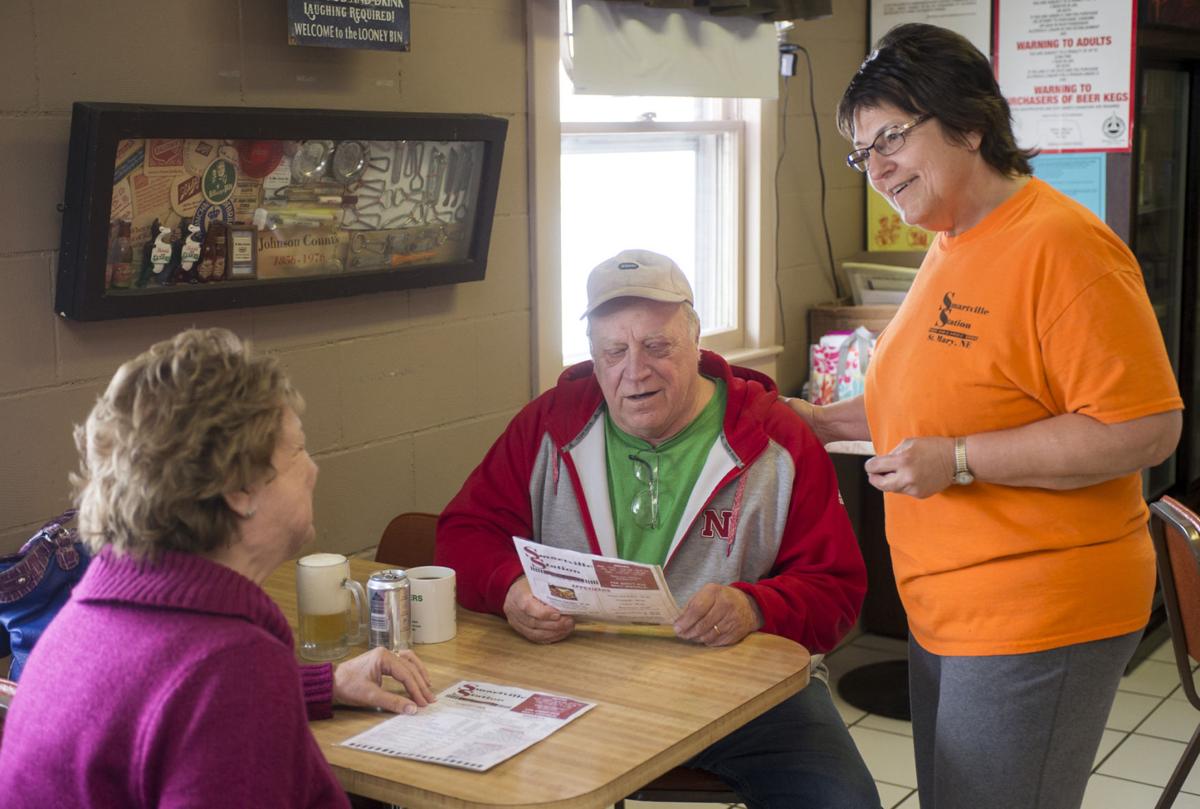 Susan Goracke takes an order from regular customers Ed and Laura Heiden of Sterling at Smartville Station in St. Mary.

One of the regulars at Smartville Station -- a small bar and grill in this tiny village -- figured out the keno machine was repeating numbers and shared the jackpot formula.

Now the bar has lost its keno machine, Goracke is struggling to keep the doors open and the Johnson County Attorney is trying to decide if anyone broke the law.

Goracke runs the fryer and fills mugs from the bar’s two beer taps with a matronly air. Coloring books are stacked in a corner ready to keep visiting children occupied.

The kitchen is known for its hamburgers, made from scratch using fresh ground meat bought from Pella’s Locker in Tecumseh.

The walls are adorned with bits of history, a newspaper clipping about the fight over renaming the town from Smartville Station to St. Mary; a framed matchbook from when Goracke’s parents owned the place in the 1970s; and dozens of sports jerseys from school districts and teams abandoned or consolidated away years ago.

Next to the bar, a flat-screen television that once flashed numbers sits blank and a metal tube that once connected to the keno machine now displays bags of chips. Cass County Keno took its machine out soon after the big win and has no plans to put one back in, Goracke said.

When six or seven people hit prizes under $500 on Halloween night, she said, she thought they were just having a lucky night.

Then, first thing the next day, one of her morning coffee drinkers turned in a ticket worth $6,000. Goracke called the company that ran the Keno Casino machine, Cass County Keno LLC in Bellevue, like she was supposed to, and got permission to write a check.

The next ticket won $3,000. Goracke made another call. But this time the person on the other end of the line paused. Then, she said, he told her something was wrong, and he remotely shut down her keno machine.

Looking for an edge

Within hours, a company technician and a Nebraska Department of Revenue investigator were at the bar asking questions.

“They interrogated me like I killed somebody,” she said.

The technician checked the machine for tampering, but found none.

After running some tests, they determined it had a software glitch, said Jeff Silver, an Omaha-based attorney representing Cass County Keno.

Keno players place bets on combinations of numbers they choose. A machine is supposed to randomly generate winning numbers, and if bettors match those numbers, they win. Instead, the machine repeated certain numbers in a pattern.

They write down winning numbers, trying to see which ones show up the most. One of those players -- Goracke says she doesn’t know who -- figured out the pattern and told a friend. The news spread fast.

A game of chance

State officials have investigated and turned findings over to Johnson County Attorney Rick Smith, but they're not saying whether anyone broke the law.

Smith said he is still deciding whether he will prosecute and declined to say what laws might have been violated.

Nebraska Charitable Gaming Division Administrator Aaron Hendry refused to say whether watching keno machines for a pattern or placing a bet after finding a pattern in a malfunctioning machine is illegal.

“It would depend upon the facts. We would have to judge each situation on its own merits,” Hendry said.

From the keno company’s perspective, a player knowingly taking advantage of a glitch is wrong and is potentially committing a crime, Silver said.

In Nebraska, where casino gambling is illegal, keno is the most popular form of gaming. People wagered $232.6 million on keno in the 2014-15 fiscal year, which was up nearly 7 percent from the year before, according to the Nebraska Charitable Gaming Division of the Nebraska Department of Revenue.

It took Goracke nearly a year of paperwork and county board meetings to get keno into her bar. Losing it has been disastrous, she said.

Smartville Station earned 7 percent of profits from keno played there, an average of a little more than $1,000 a month.

Keno brought people in the door. They'd eat a bacon double burger and drink a can of beer -- the bar doesn’t sell bottles -- while they played.

On a busy Sunday with keno, Smartville Station would bring in about $700. In the months since Goracke lost keno, the bar has been generating closer to $250 on Sundays.

Goracke feels betrayed. She did nothing wrong, she says, yet her business is suffering the consequences. She worries no other keno company will want to put a machine in her bar because of the incident.

“This has hurt me tremendously,” she said.

And she feels sorry for those who won. The keno company hasn’t paid them their full winnings, she said. Her customers paid to play and won, it’s only right they get paid, she said.

After canceling the checks Goracke had written, Silver said Cass County Keno wrote checks to the people who are not under investigation for potential wrongdoing. Some of those checks have been cashed.

But the company caps the amount of keno winnings it will pay out at a combined $25,000 per day. The restriction is in its rulebook and approved by the state Charitable Gaming Division, Silver said.

If the winnings exceed that amount, as was the case with Smartville Station, then the winners each get a percent of the $25,000 based on the size of their jackpot.

The state considers the issue of winnings a contractual matter, making it a civil issue rather than a regulatory one, Hendry said.

Jodi Benker Clay wanted to start the new year with a new house.

Keno bar where patrons won big up for sale

The small-town bar and restaurant where customers hit it big last fall when a keno machine malfunctioned is up for sale.

The depth of some Nebraskans’ gambling problems has come into sharper focus in recent years.

No jackpots, but five $50K tickets sold in Nebraska

No one bought a winning ticket for the jumbo Powerball jackpot drawn Wednesday night, but five $50,000 winning tickets were sold in five Nebra…

Cindy Lange-Kubick: United we stand (in wanting to win the Powerball)

If I win, will Warren and Bill invite me over to play bridge?

For the past 10 years, more than two dozen employees of Sysco Lincoln have pooled their money and bought the occasional bundle of lottery tick…

Nebraska gaming officials have accused a keno operator of conspiring to conceal $1.28 million via illegal bets and committing more than 260 vi…

Susan Goracke says her bar, Smartville Station in St. Mary, is struggling since a keno machine was shut down after a Halloween night malfunction.

Susan Goracke takes an order from regular customers Ed and Laura Heiden of Sterling at Smartville Station in St. Mary.