As you walk the Historic Haymarket area today it is impossible to envision it as being scantily populated with a few small houses and equally small shops. Before the arrival of the Burlington & Missouri River Railroad in 1870 however the land west of today’s Ninth Street was on the edge of the then unstraightened Salt Creek floodplain.

Then, with the railroads, the houses were razed and replaced with wholesale, distribution and manufacturing businesses as well as hotels interested in being near the newly arrived passengers.

In the 1867 plat of Lincoln’s Block 32, bounded by P, Q, Seventh and Eighth streets, a couple of blocks east of the then channel of Salt Creek, there were 20 small lots. In the replat of about 1880 the residential-sized lots became eight north/south aligned lots. 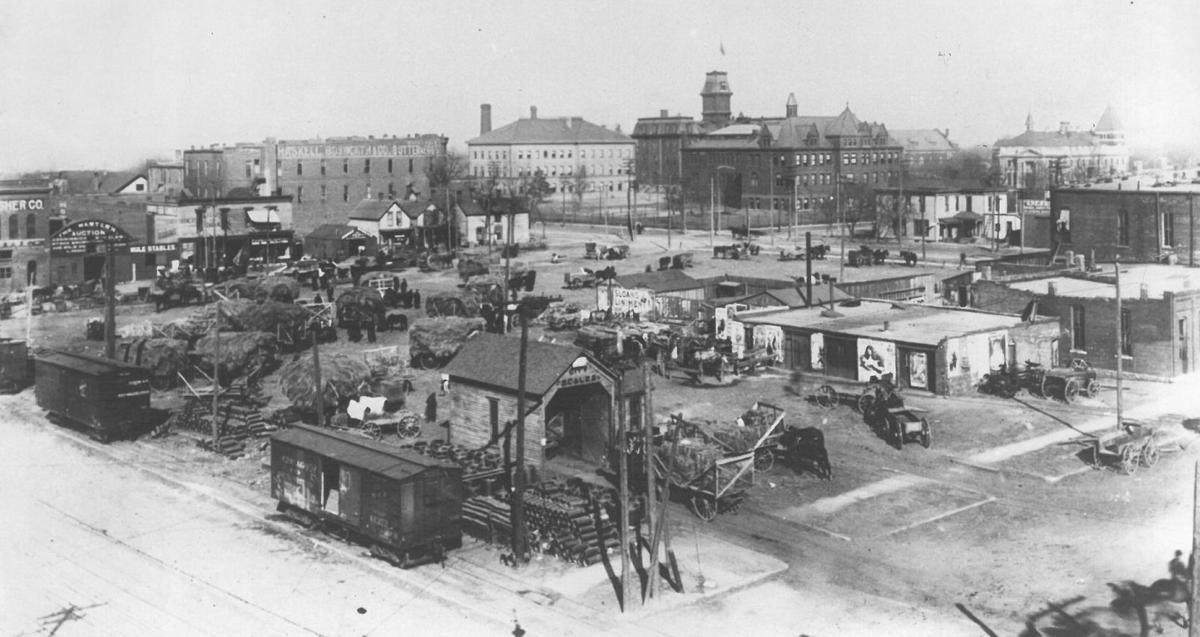 The Haymarket area in the early 1900s was the hub of horse-drawn commerce. 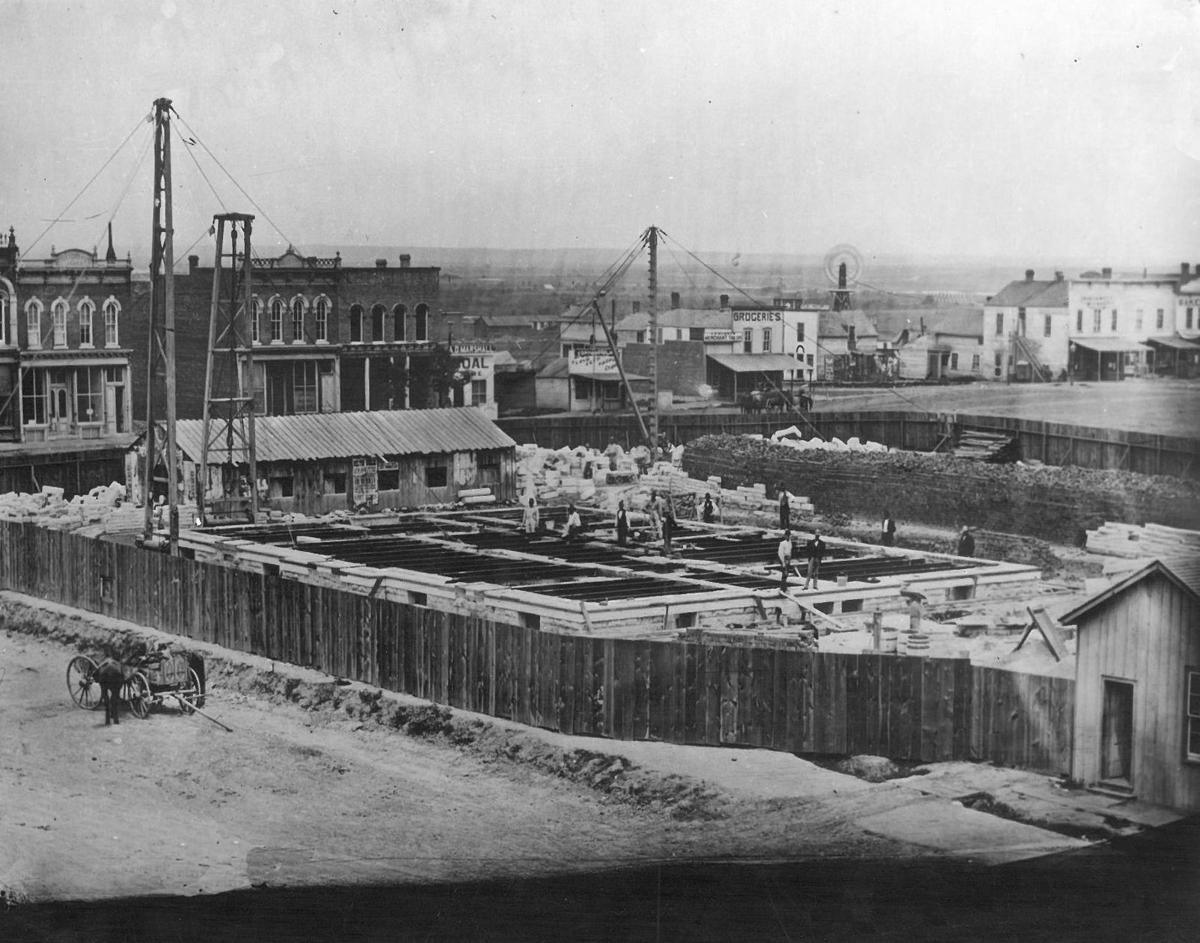 An early photo of Government Square looking northwest features the early businesses in the future Haymarket area in 1874. 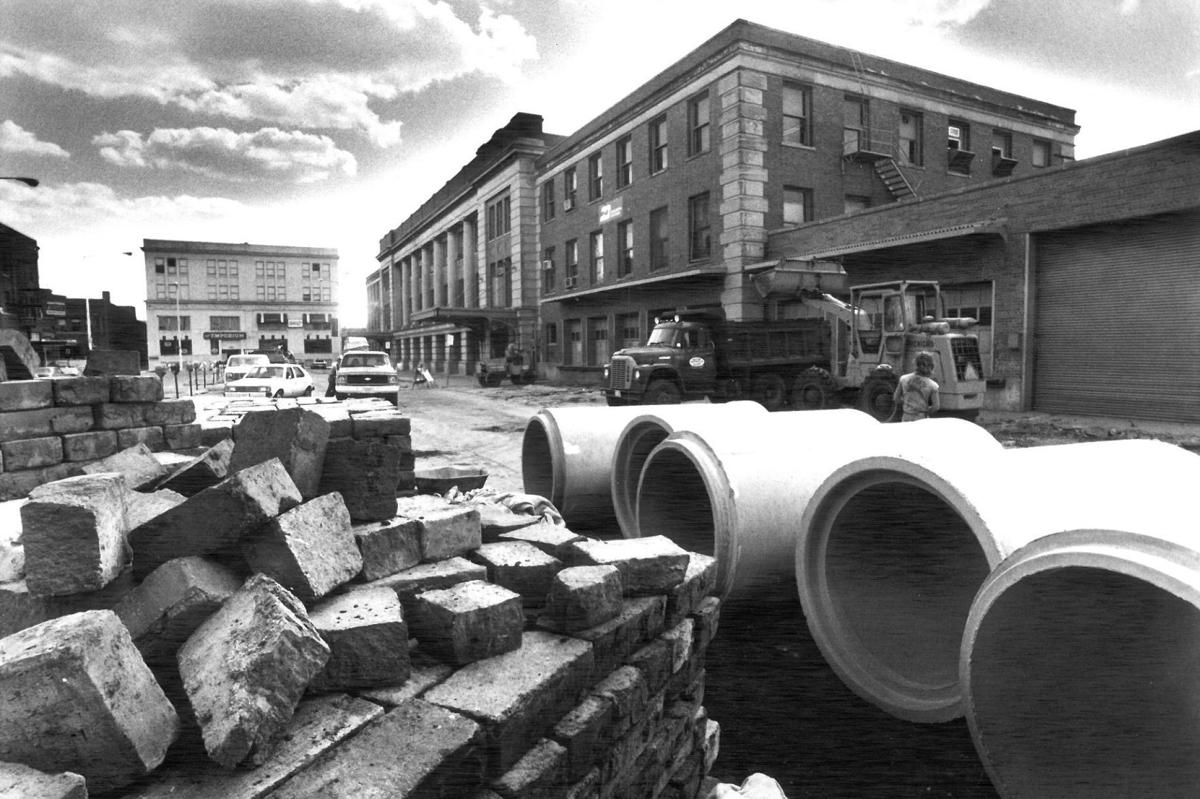 Construction workers begin tearing up Seventh Street in preparation for the renovation of the Old Burlington Northern Depot. The renovated station would sport new curbs, sidewalks and a newly bricked street. 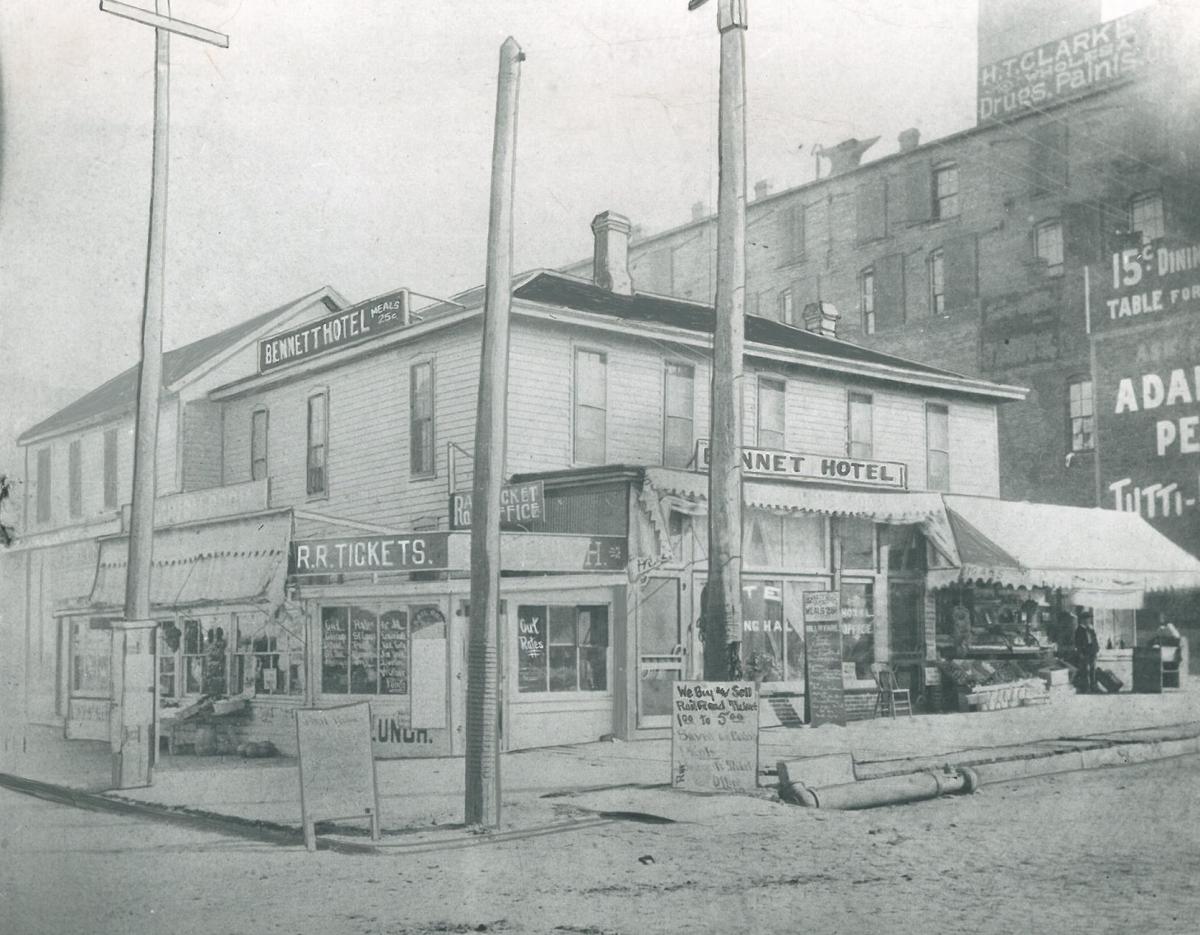 This early photo of the Bennett Hotel shows the original cottonwood timber structure that stood until 1915. The house-like structure was replaced with a brick building later that year. 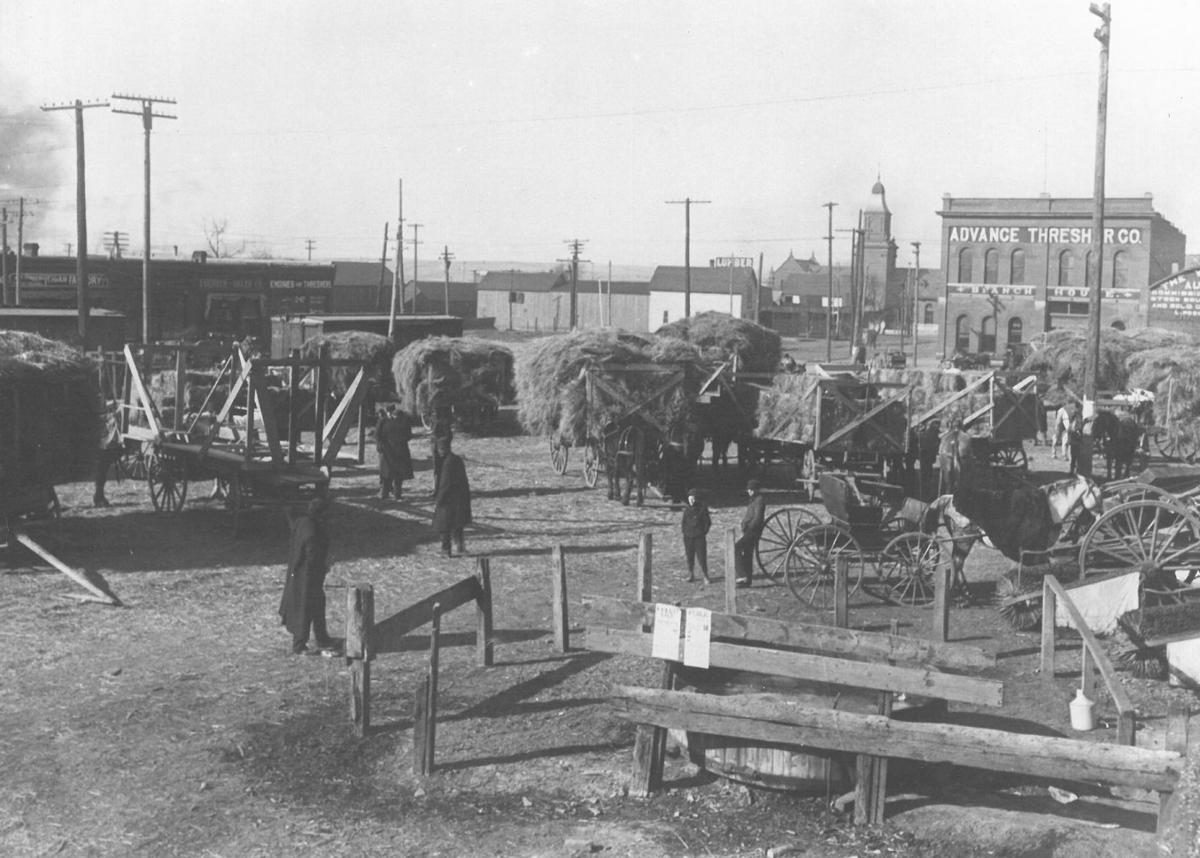 The Haymarket area was once the center of actual sales of hay before brick buildings began to pop up in downtown Lincoln. 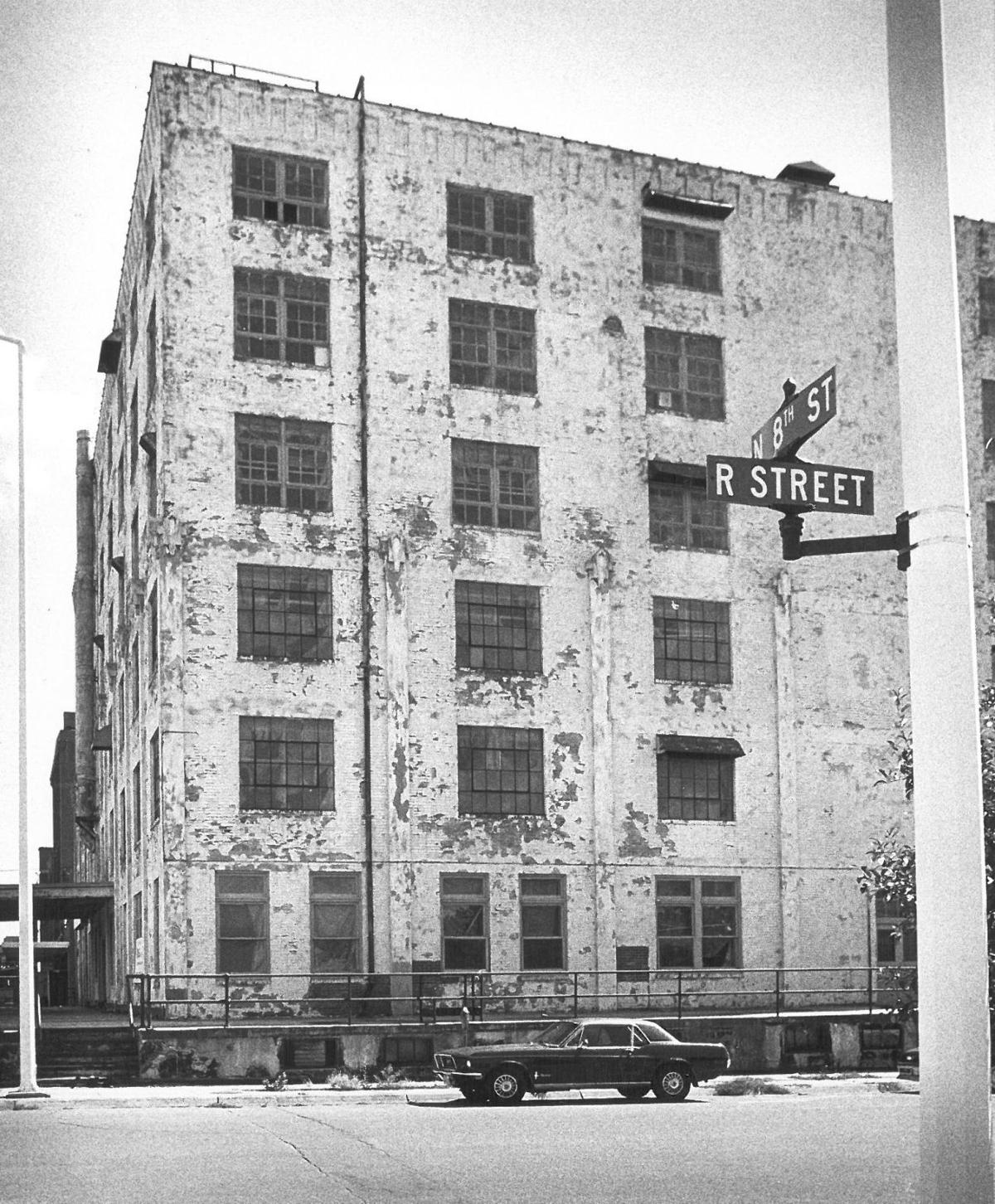 In 1986, a worn-out Hardy building received a facelift and was transformed into 65 apartments. 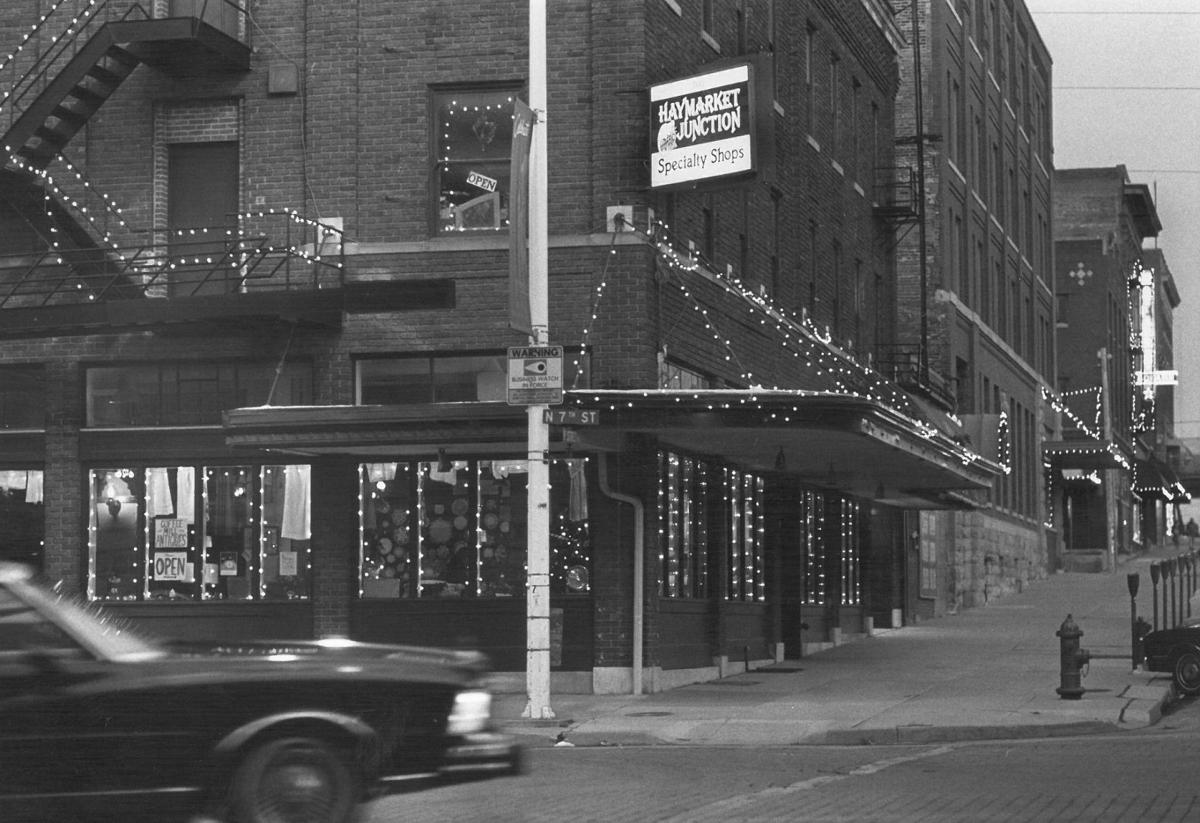 Thousands of lights were set aglow on historic buildings, retail shops and restaurants in the Lincoln's Haymarket district in 1986. 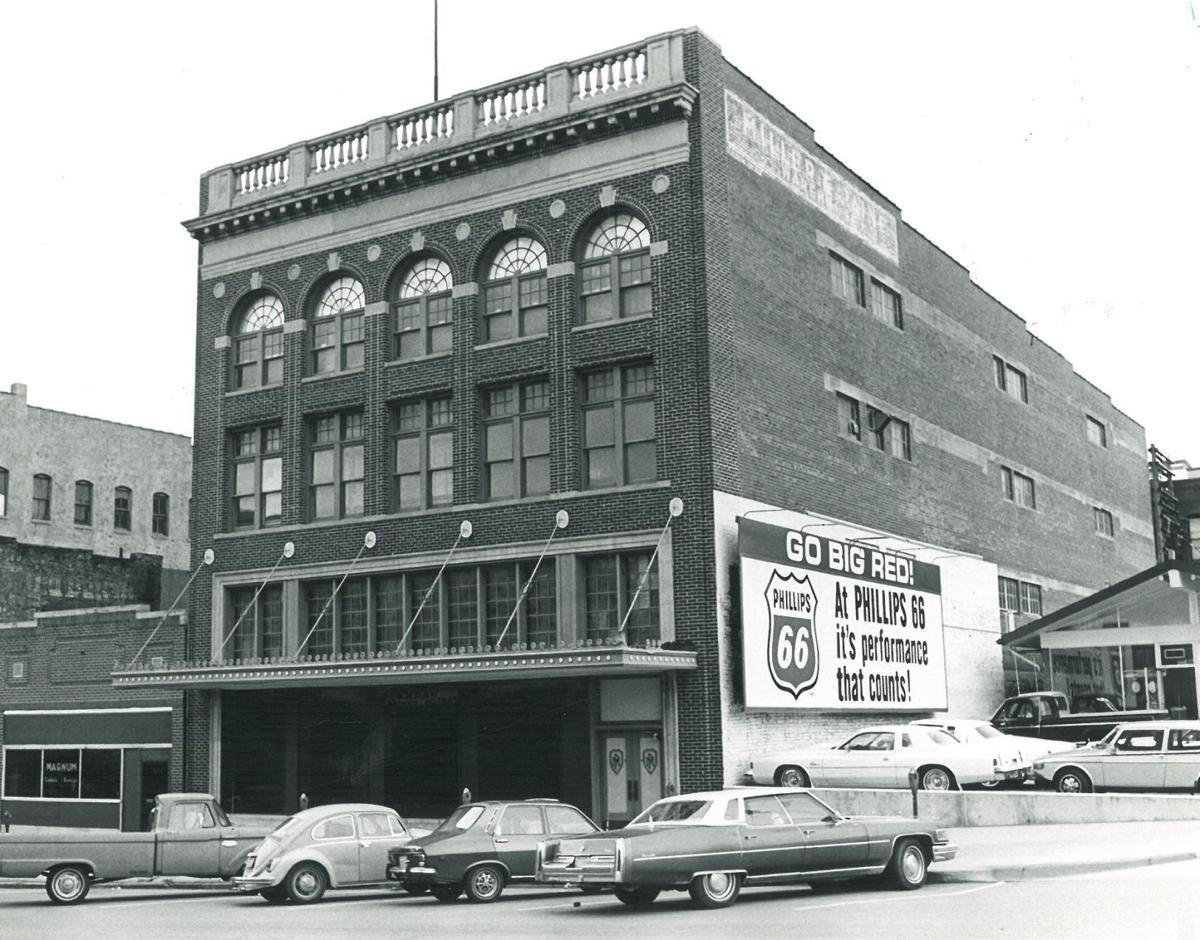 The old Miller and Paine warehouse became the Personalities Ban-disco Lounge in 1977. The remodel cost $125,000 but brought disco and live bands to the Haymarket. 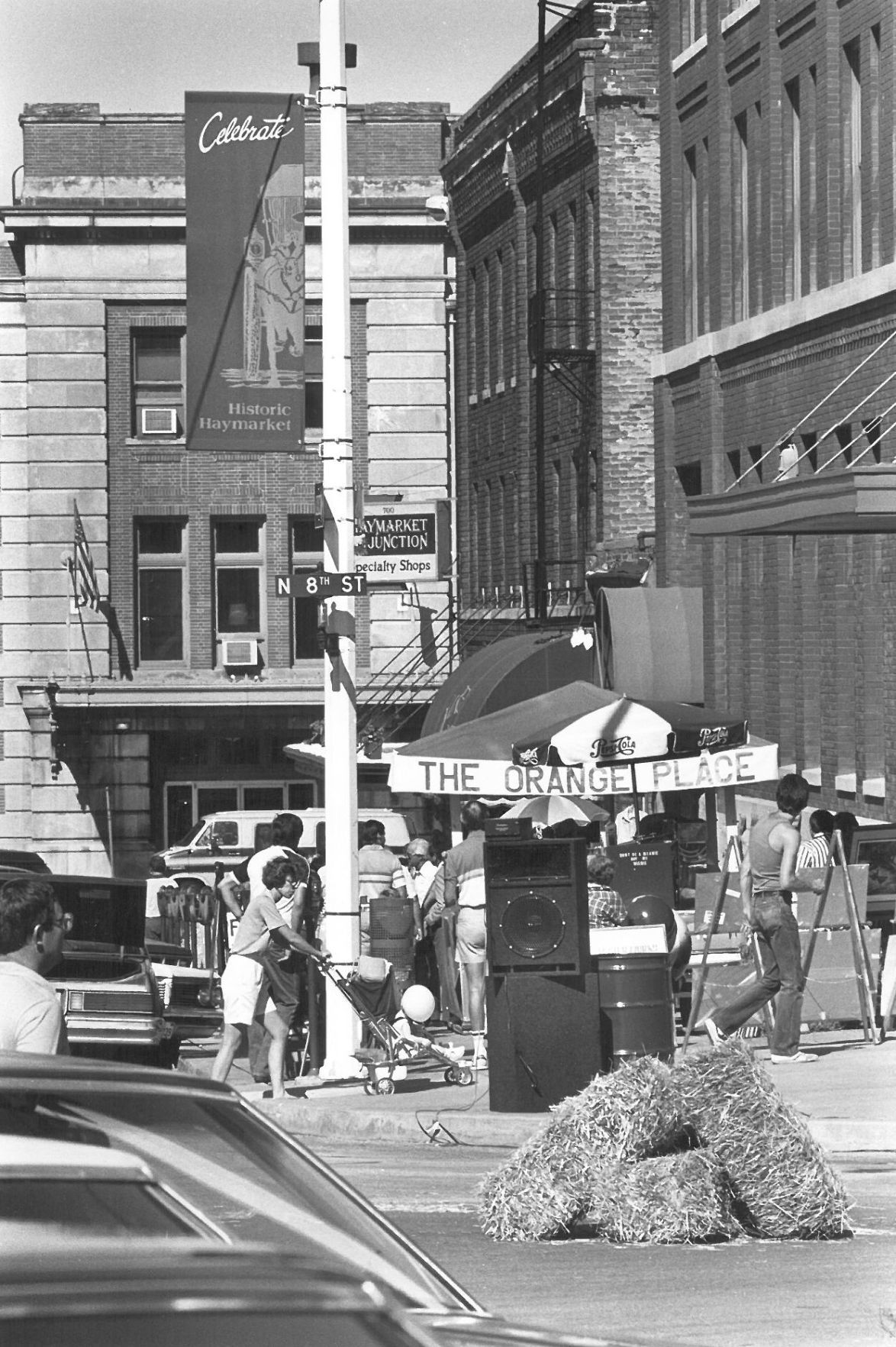 The Haymarket District swarms with people taking in the atmosphere of Hay Days in 1986. 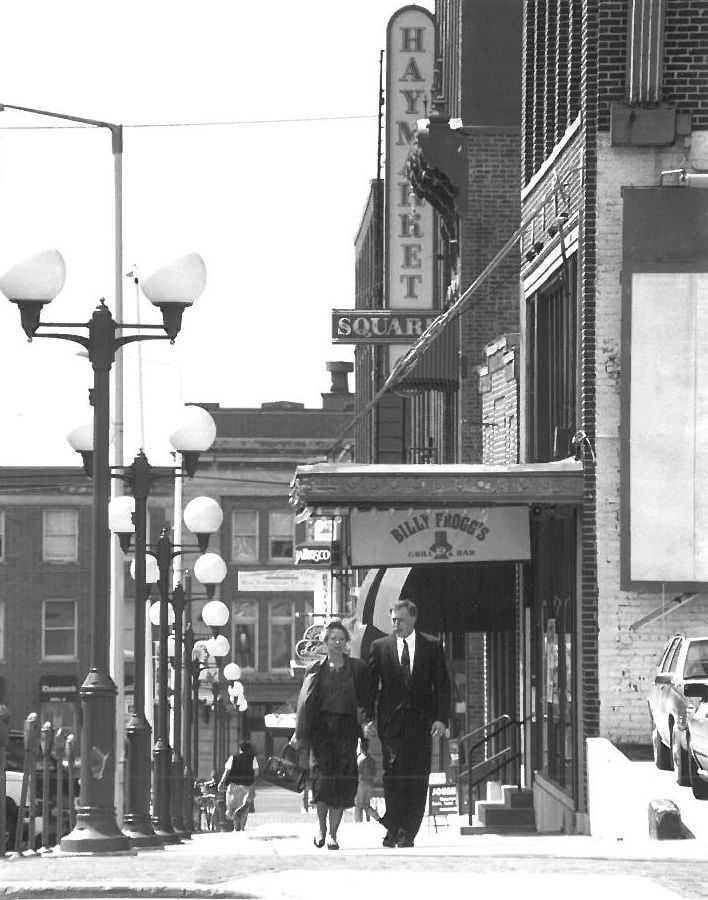 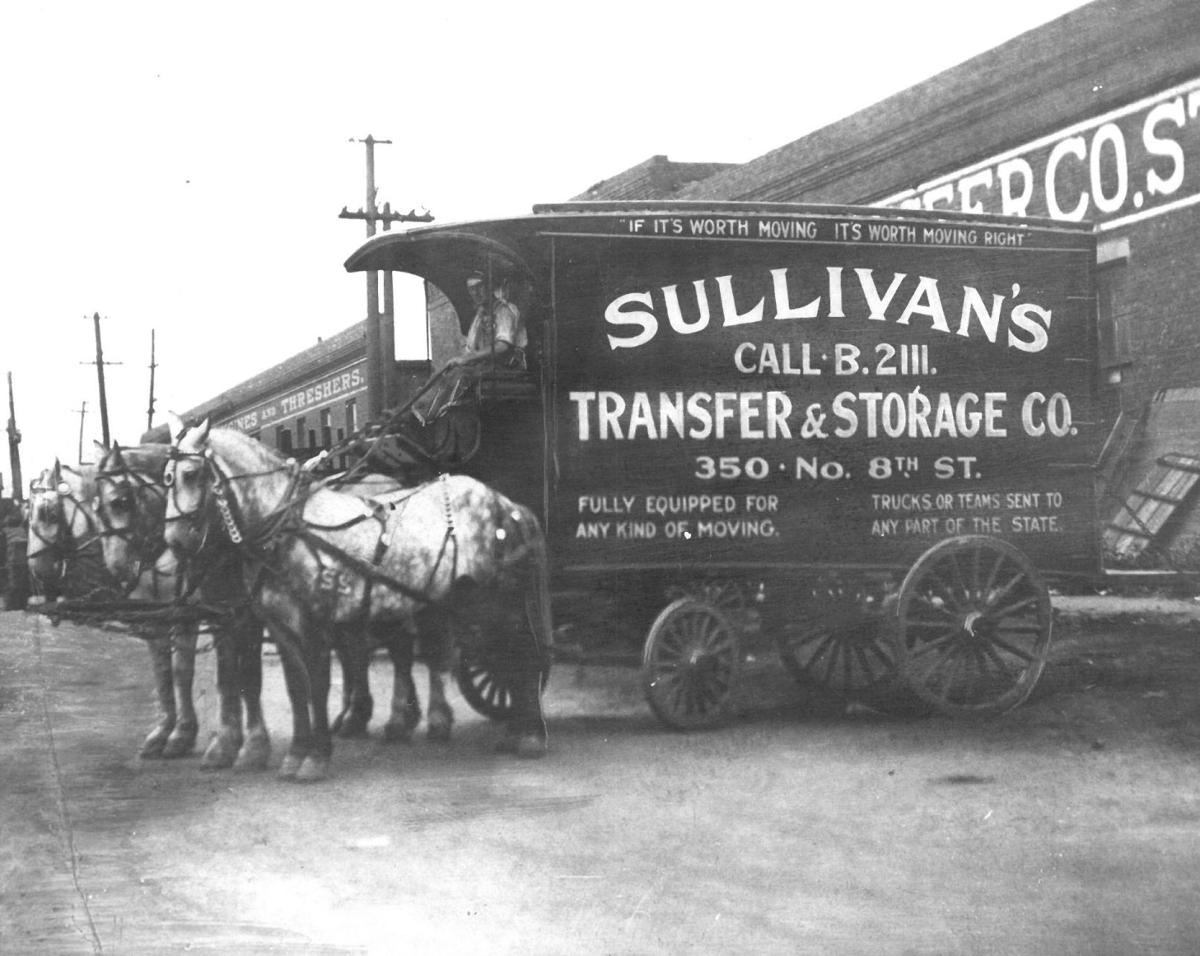 The Sullivan Transfer and Storage Company offered helping hands to people moving across the state. Their headquarters was located along Eighth Street in the Haymarket district. 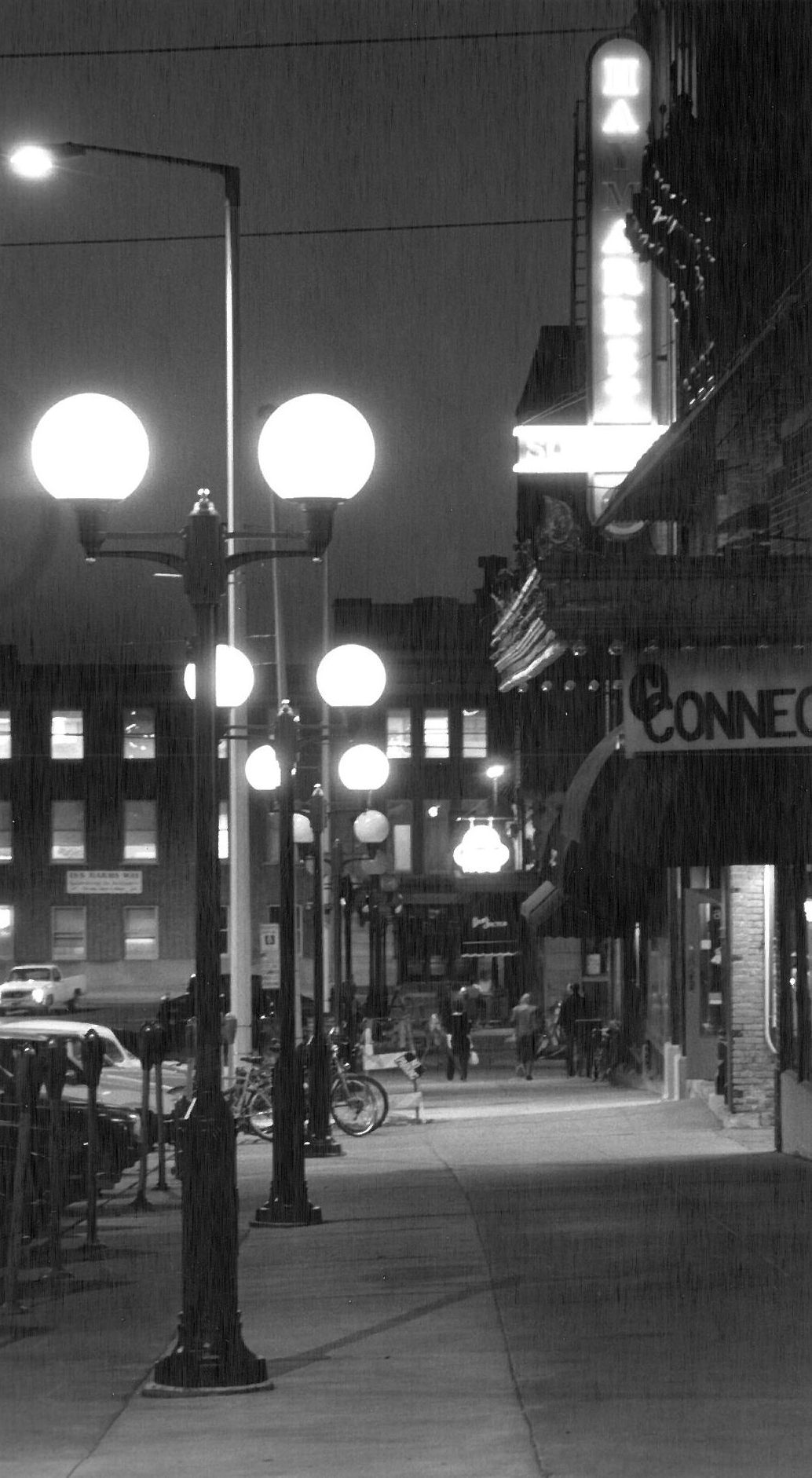 Light up the night

The wrought-iron, double-globe lamps installed along P Street in 1991 transport nighttime Haymarket visitors back to the early 1900s. 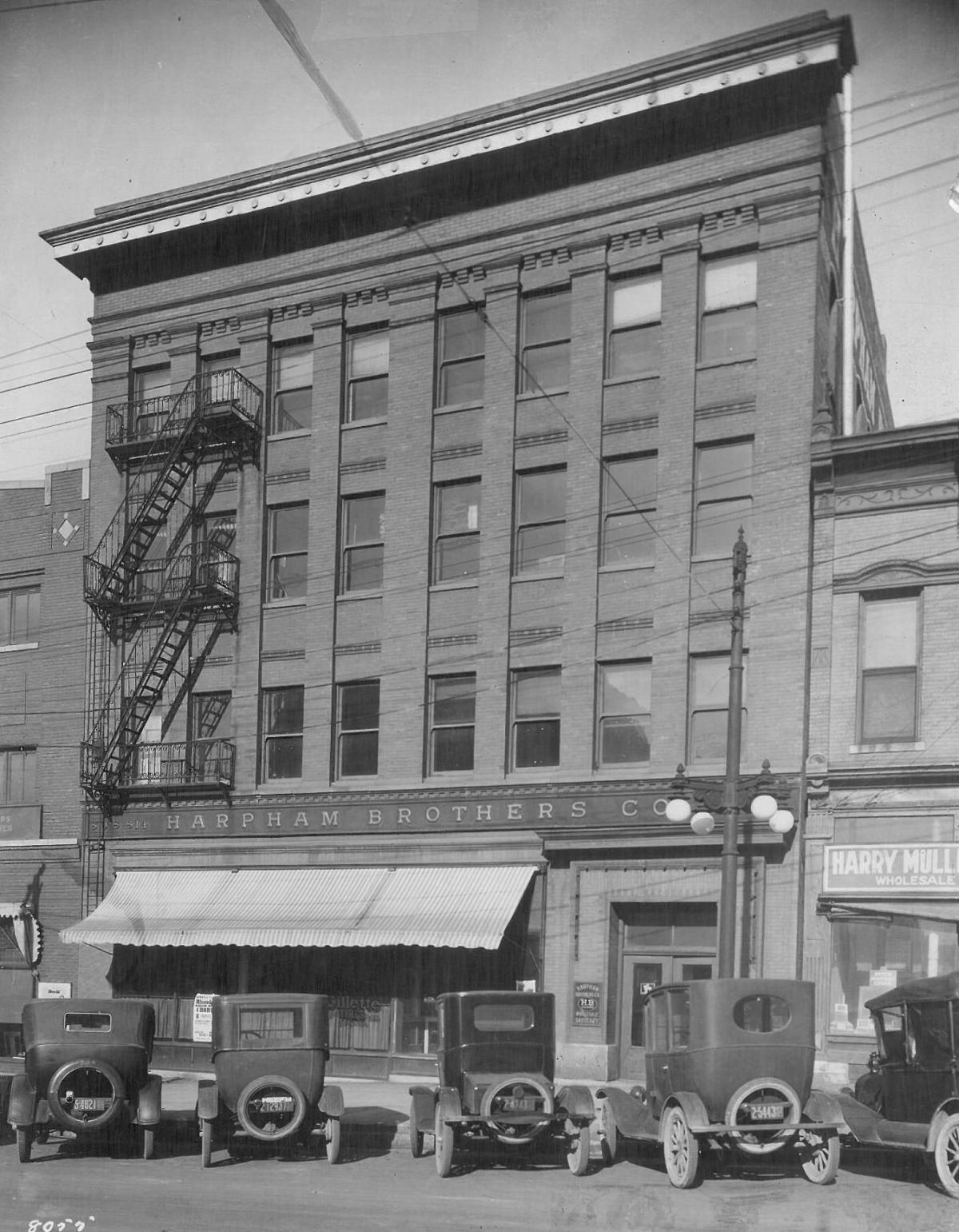 The Harpham Brothers Co., founded in 1888, was known for its western saddles, harnesses, horse collars and riding equipment. Originally on O Street, it moved to the 800 block of P Street in the early 1900s. 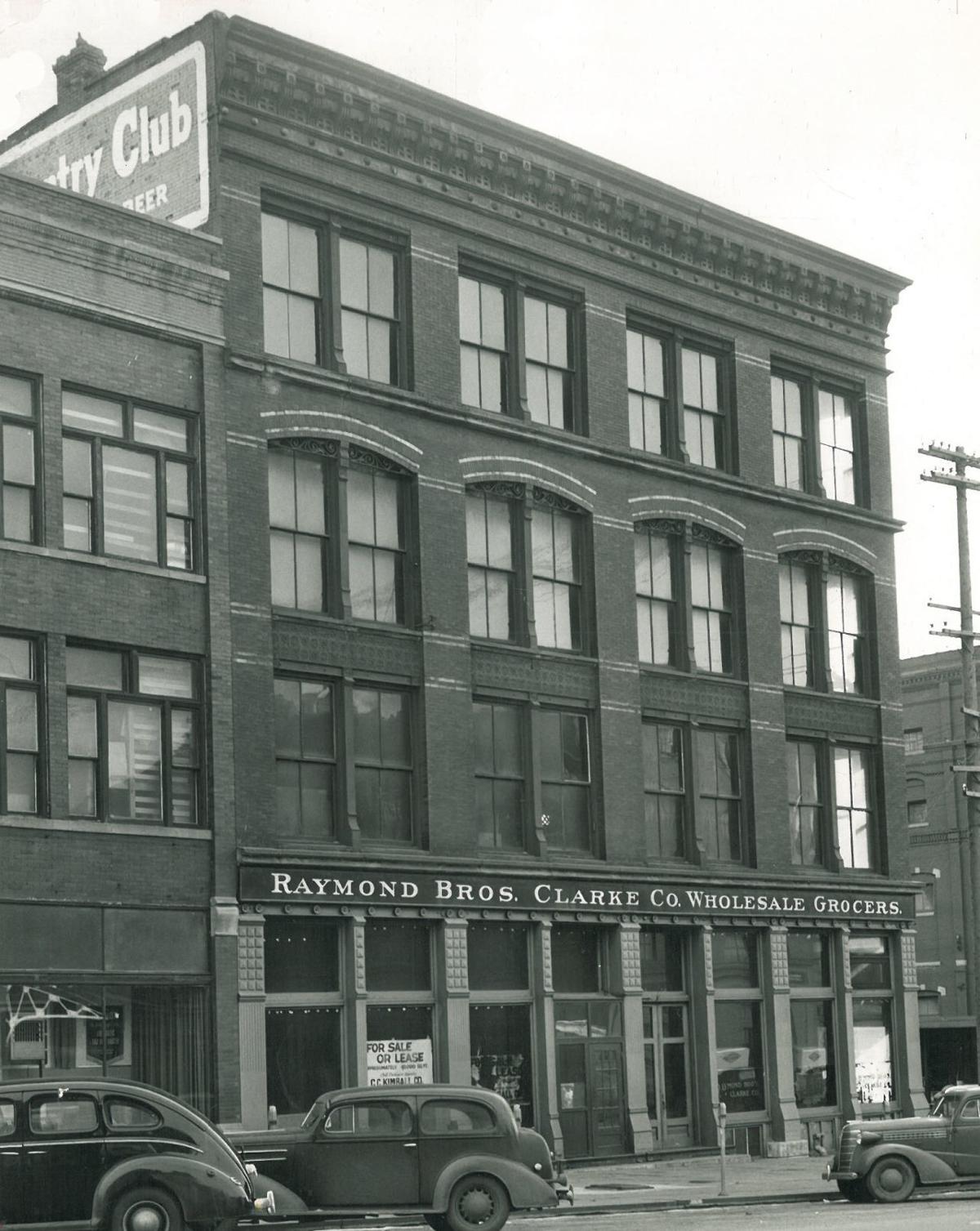 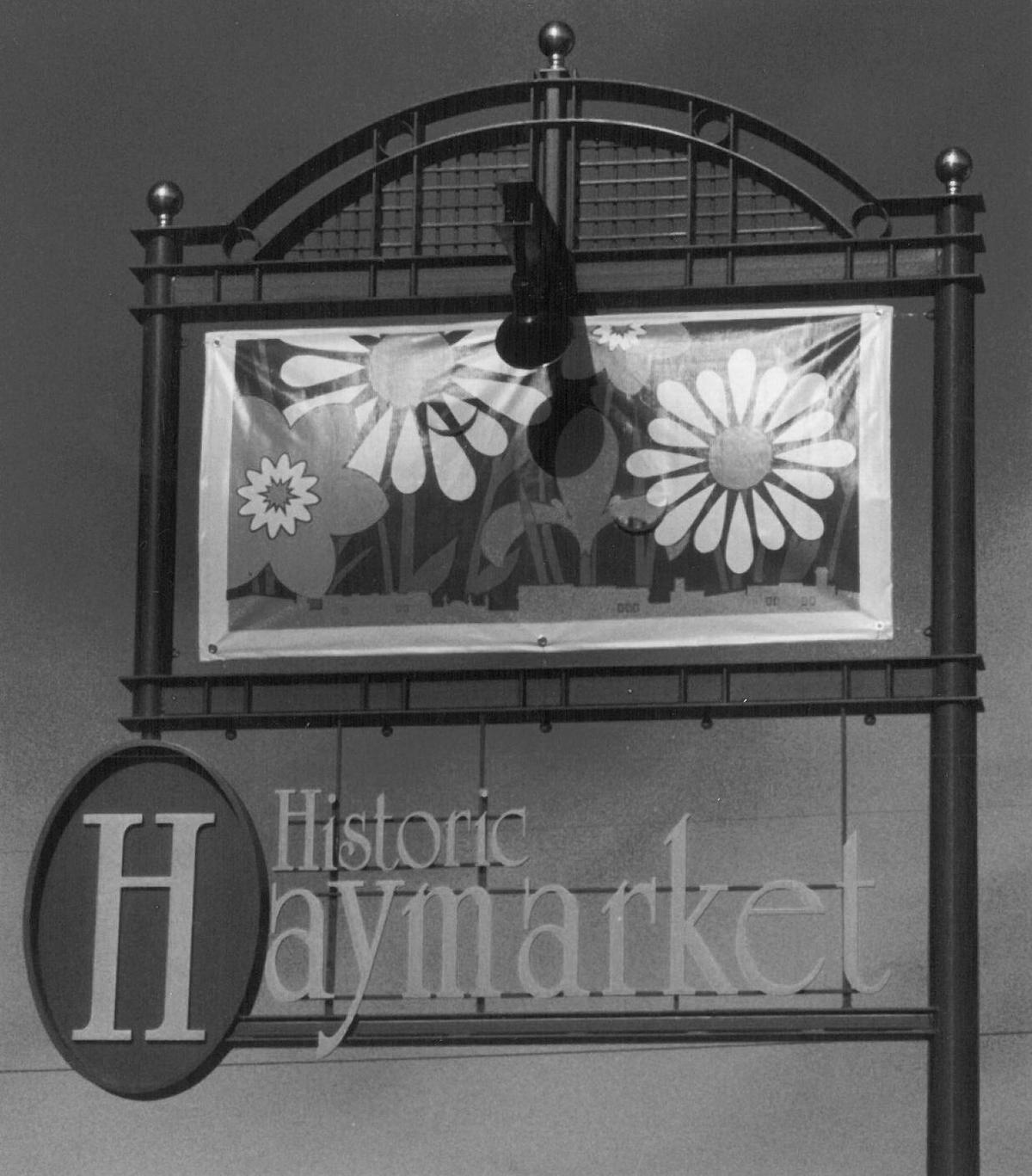 The Haymarket area has been the focal point for entertainment in Lincoln since the late 1800s. 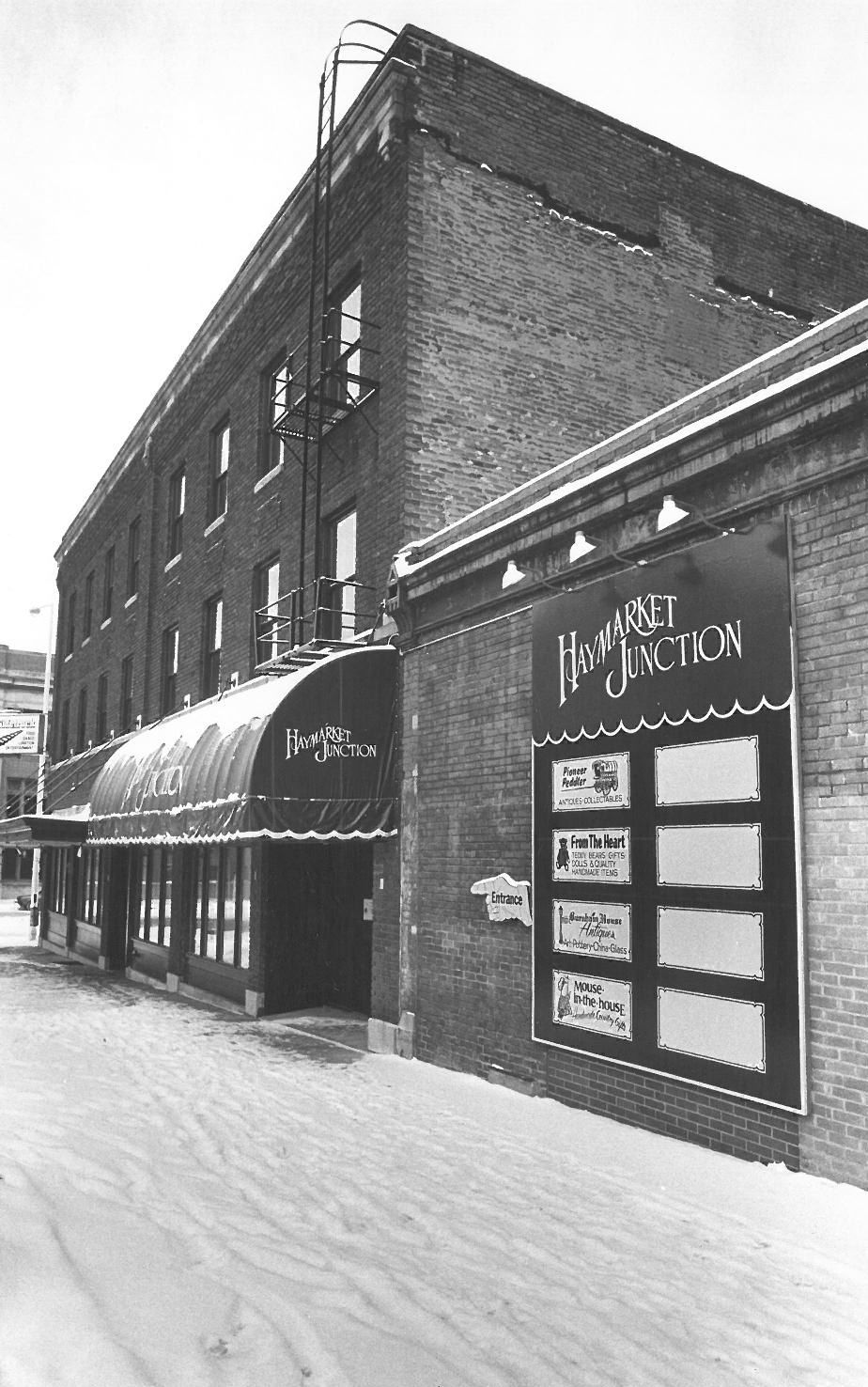 Patrons celebrate the renovation of the Haymarket Junction in 1985. The building was first constructed as the Bennett Hotel in 1915, a lodging place for the railroad, but now houses retail shops in downtown Lincoln. 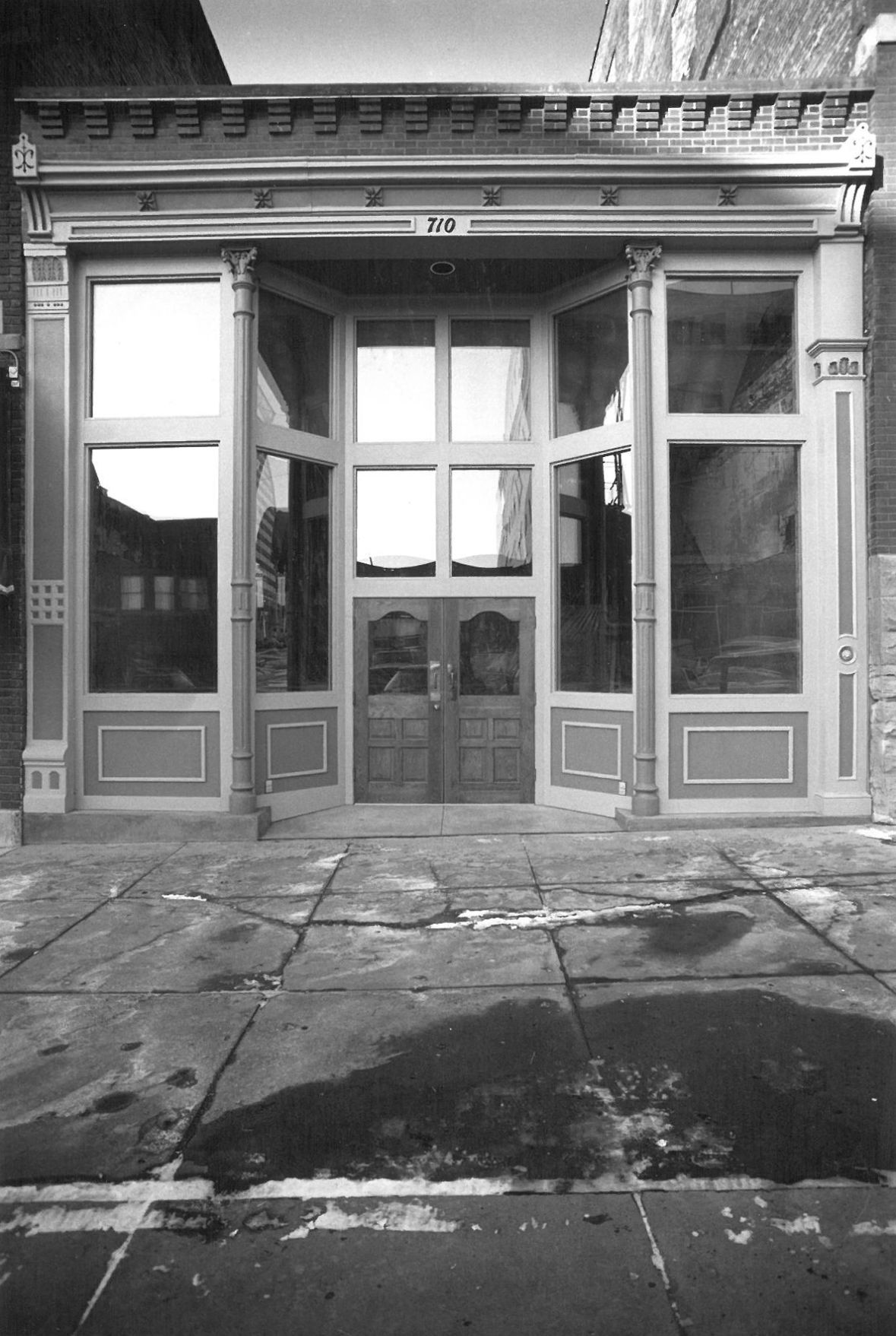 Currently McFarland and Sons Irish Pub, this building was once the home of Bill's Saloon at 710 P St. in downtown Lincoln. 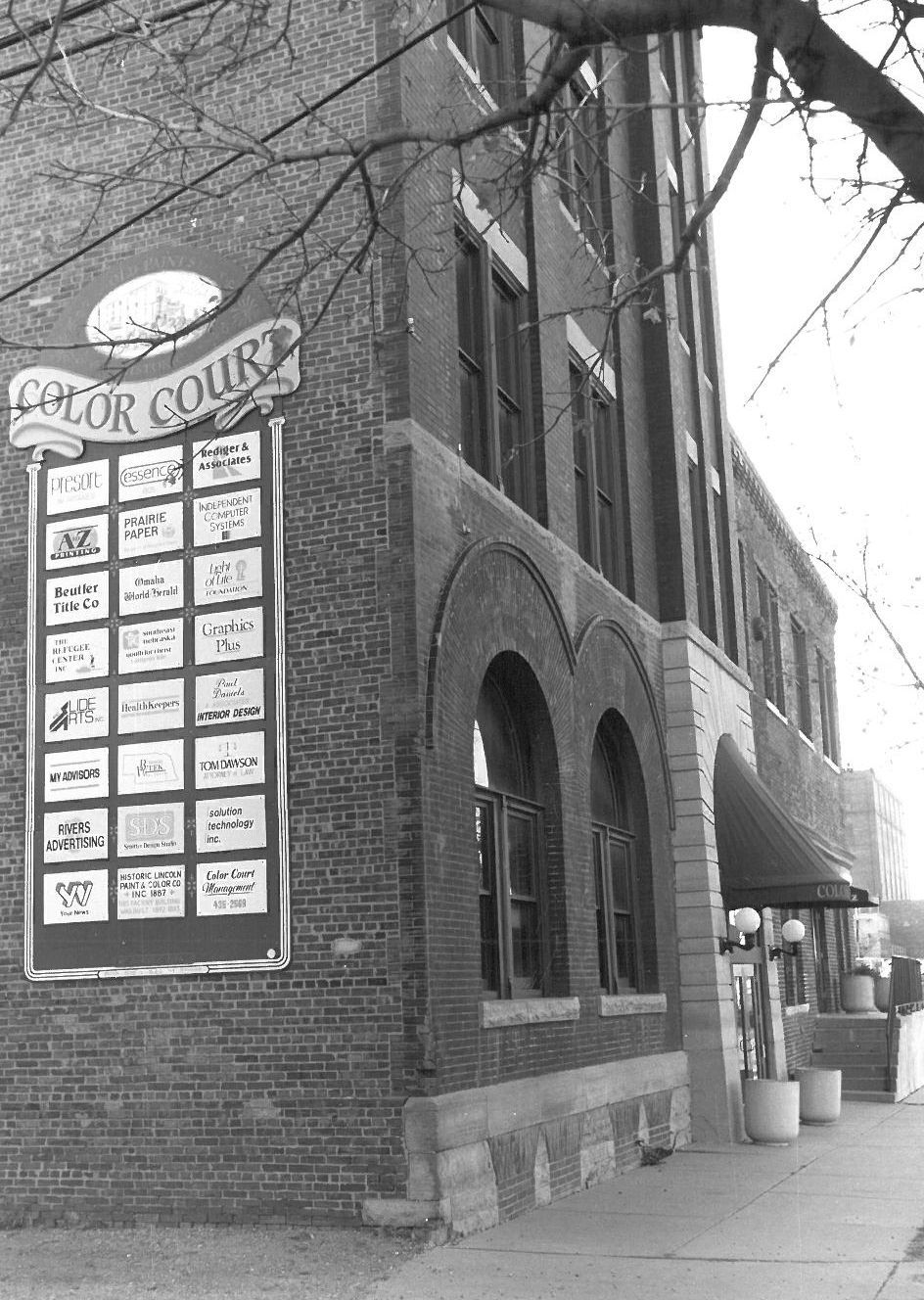 The Color Court and Peanut Butter Factory in the Haymarket area was the site for a festival of music, food and entertainment in 1989. 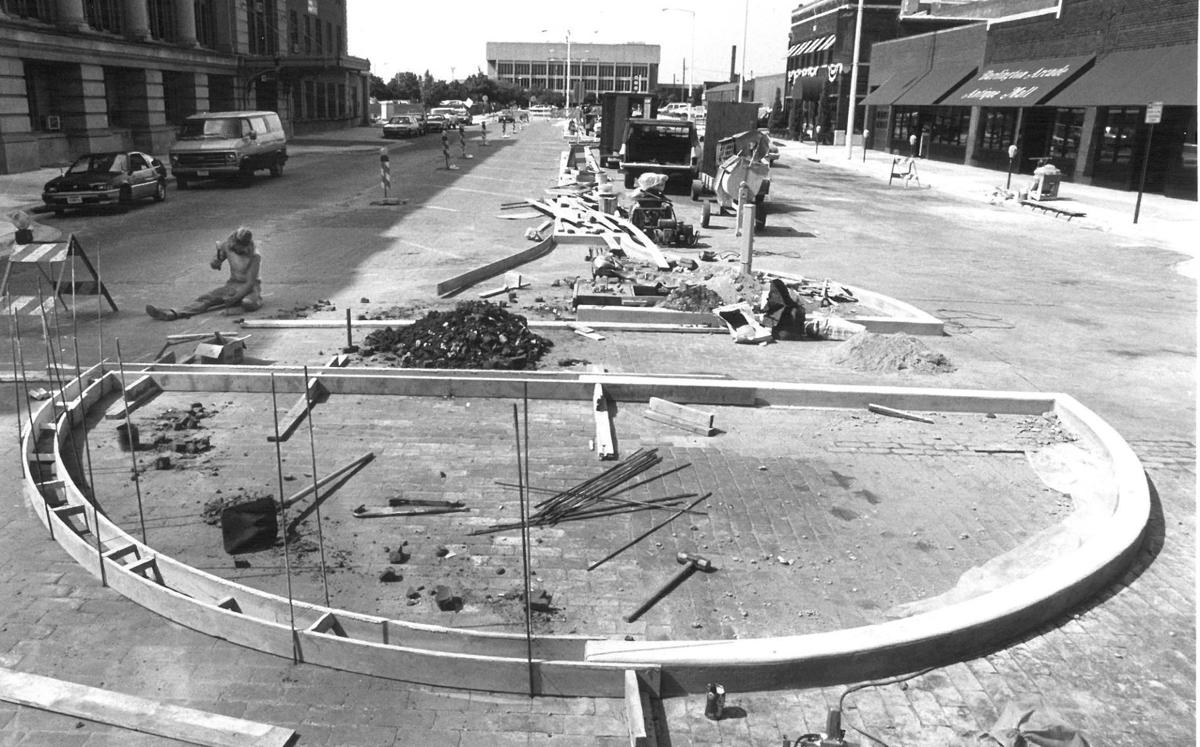 Robert Mellage, an employee with Walton Construction, found little relief from the afternoon heat after moving into the shade of the Burlington Northern Depot on June 29, 1989. 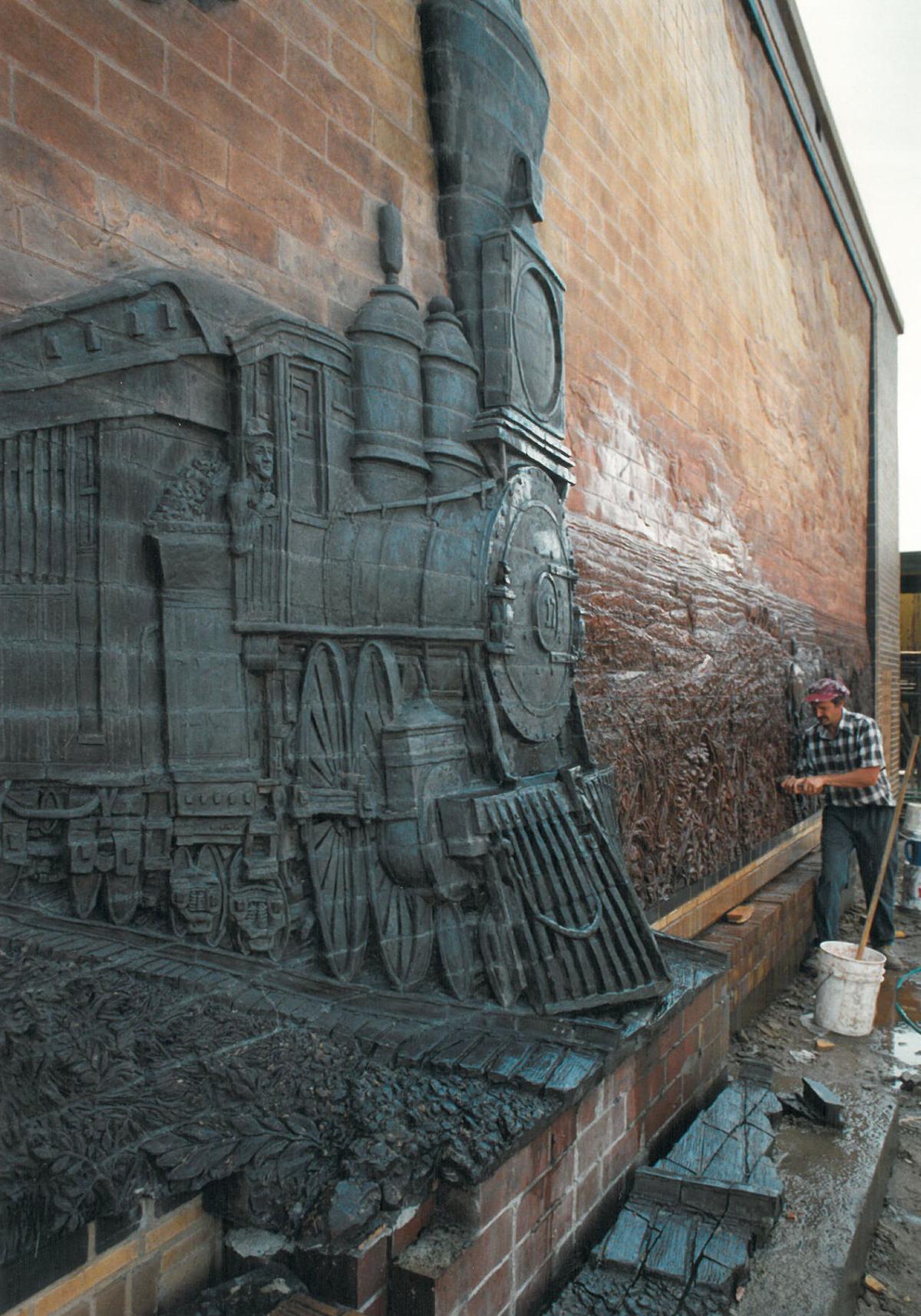 Jay Tschetter works on his Iron Horse Legacy sculpture at the Iron Horse Park in the Haymarket area in Lincoln. The brick relief artwork reflects the importance of railroads in the state. 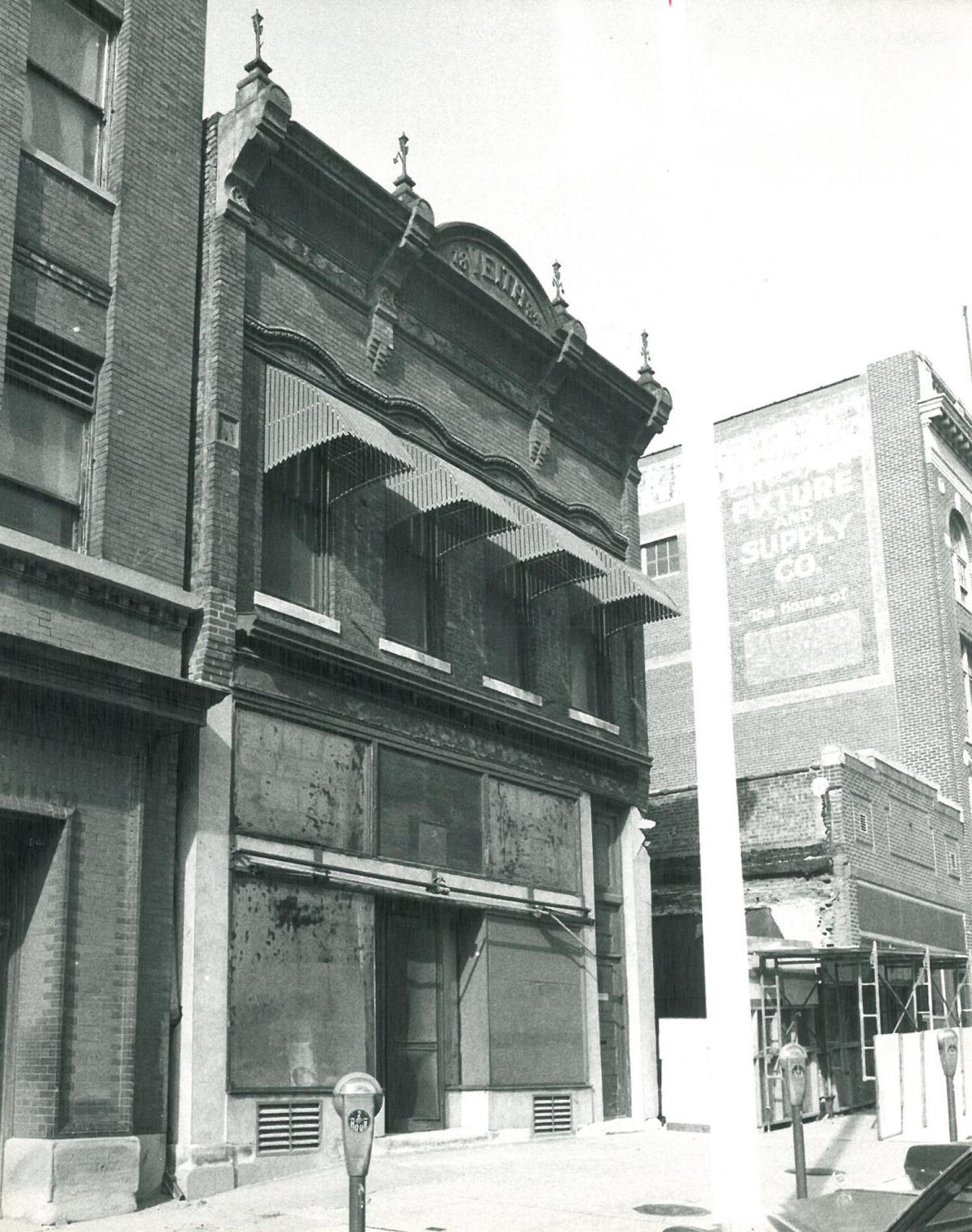 The Veith Building was built during the boom of the late 1880s. Today, one of the oldest buildings in Lincoln is home to the Tavern on the Square. 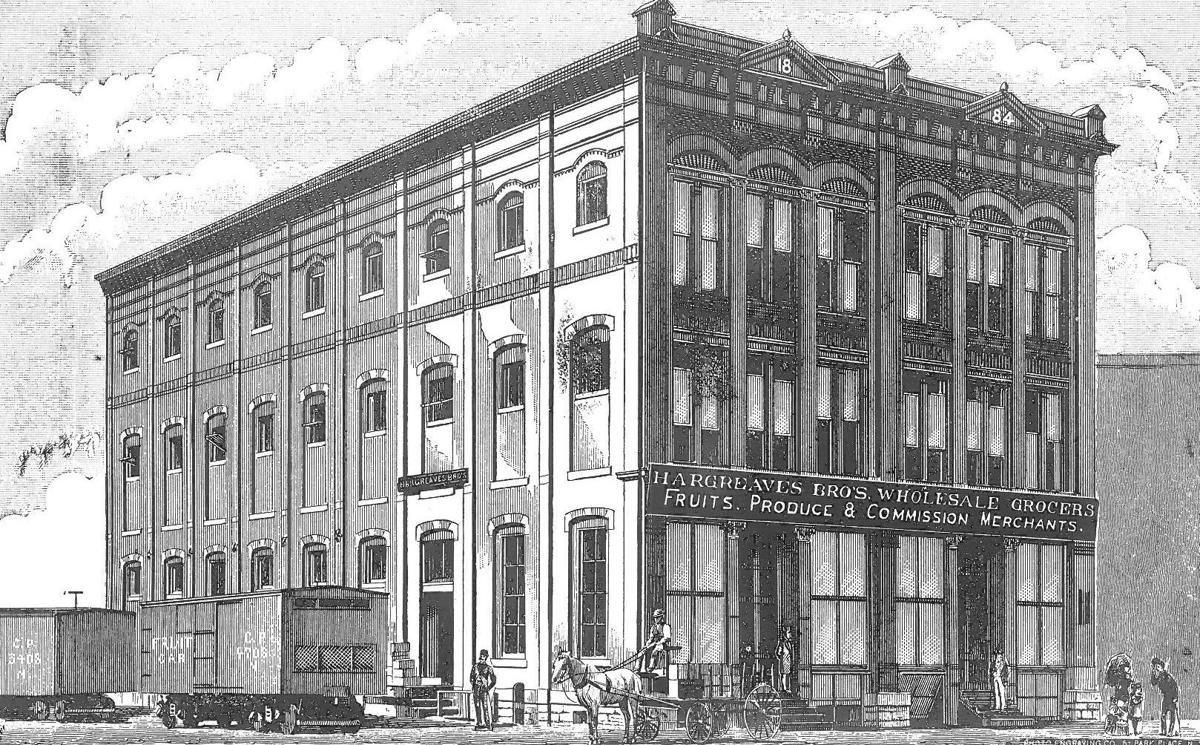 The Hargreaves Brothers Company, located at 747 O St., was a wholesale grocery until 1917. After purchasing the location in 1917, the Schwartz Paper Co. remained at this location for almost a century. 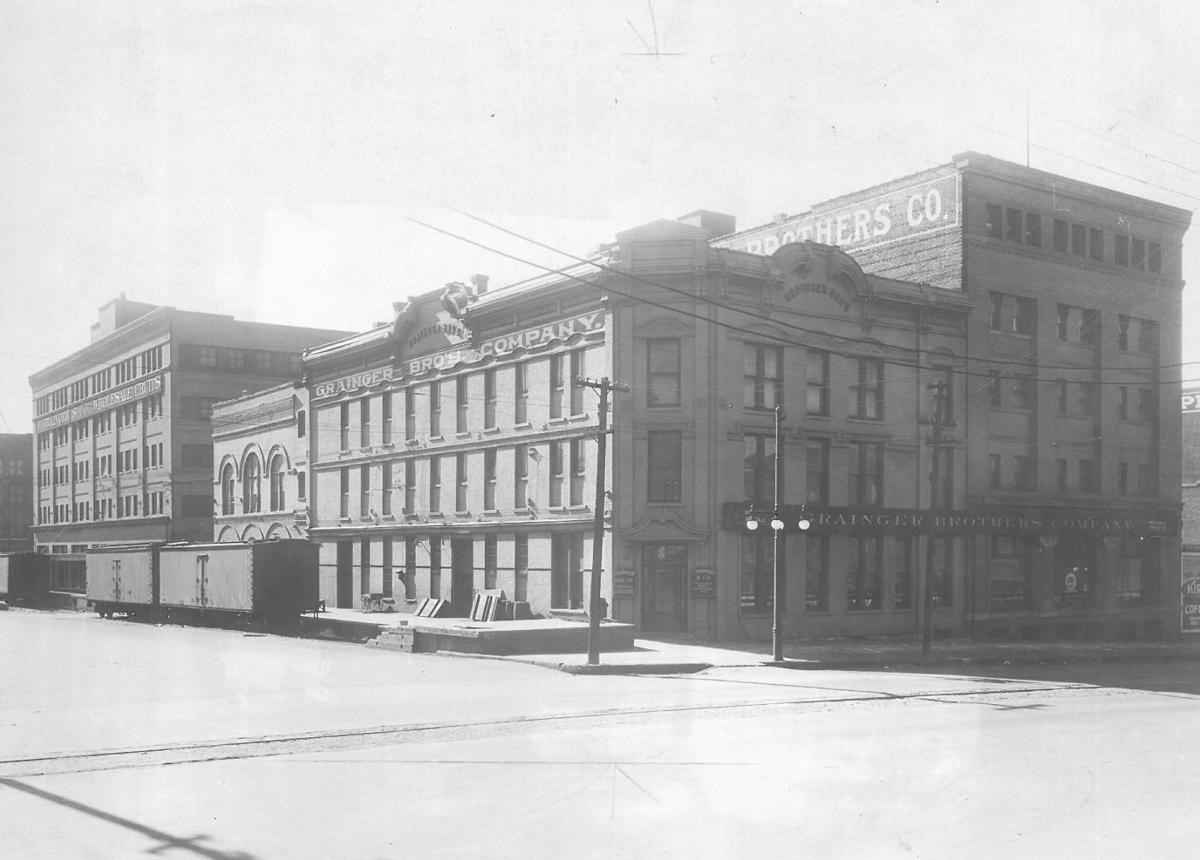 Grainger Brothers Co. was one of the largest wholesale grocers in the Haymarket area during the early 1900s. After decades of work at their Eighth and O to P location, the business ceased operations in the mid-1960s. 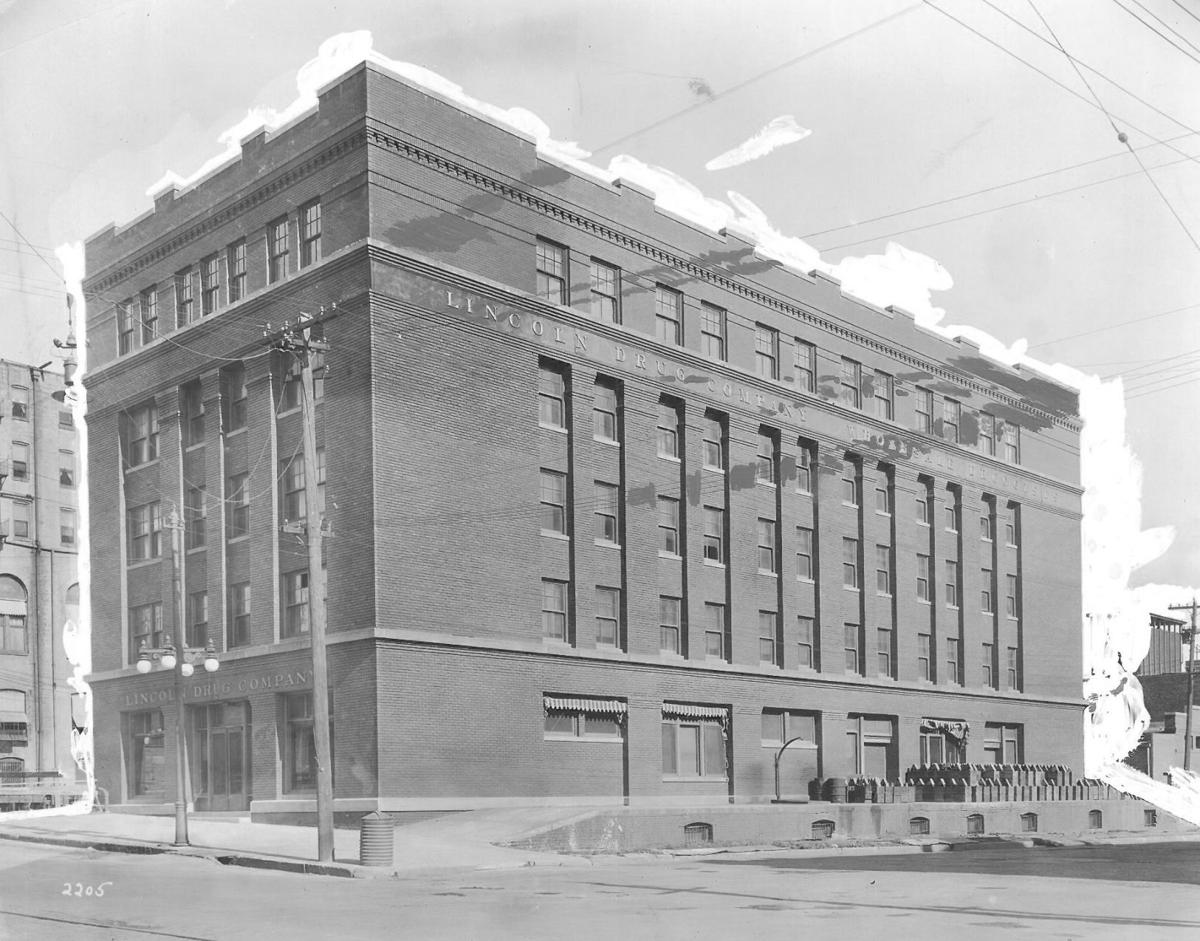 Founded in 1897, the Lincoln Drug Co. sold drugs, chemicals and pharmaceutical supplies from this location until the 1950s.

The small “Hurd’s coal & wood office” sat incongruously in the intersection of Seventh and P streets, and a foundry occupied the present Creamery Building’s site. Most of Block 32 was owned by the Atchison & Nebraska Railroad while a small, unnamed hotel sat on the northeast corner of Seventh and P. That small hotel was actually a cottonwood house which had been converted in 1871 with the arrival of the railroad while, perhaps only months later, the Midland Pacific Hotel was built at about Fifth and O streets.

John Adam Fedewa was born in Prussia in 1827, immigrating to the U.S. in 1842. After several moves and serving with the Ohio Volunteers in the Civil War, Fedewa moved to Lincoln in 1869 where he owned the Farmer’s Home Hotel on the northeast corner of 10th and N streets. About 1875 he acquired the old cottonwood National Hotel at 704 P, just east of the northeast corner of Seventh and P streets. John died in 1888 with the hotel then operated by his wife Margaret. In 1892 Margaret moved to the northwest corner of 42nd and Vine streets leaving the hotel briefly vacant. Just a block north at 236-248 North Seventh Street was Tiernan’s Saloon and Hotel where Andrew Mooney was a cook.

John R. Bennett moved from Peru, Nebraska, to Lincoln in 1891, opened a lunchroom at 212 North Seventh Street just north of the National Hotel and, with A. N. Wycoff, operated a tobacco and confectionery just west of the hotel in a tiny, frame building. By 1895 the National Hotel had been renamed the Bennett Hotel with Mrs. Carrie M. Reaves as manager and a small railroad ticket broker in the old tobacco store west of the hotel operated by T. C. Bennett.

The 1905 city directory shows the Bennett ticket office on the corner but, interestingly and probably erroneously, in three distinct listings in the directory, calls the hotel at 712 P Street the Tremont Hotel operated by Mrs. C. M. Reaves. The 1910 directory shows the Bennett Restaurant on the northeast corner of Seventh and P has replaced the ticket office but the hotel has converted back into the residence of Edward and Mary Wilson. The following year the Oriental Hotel is shown at 224 North Seventh with Patrick Mooney as proprietor, perhaps explaining the Bennett Hotel’s confusion with Mooney’s Hotel.

The story clears up in 1915 as two brick buildings are constructed. John Bennett’s extant building replaced the old cottonwood house/hotel and the ticket office as a $20,000, three-story, brick hotel and a one-story, two-bay brick building with a café and shop was constructed at 206 North Seventh Street.

In 1917 John and Albert Bennett operated the hotel and restaurant with the building to the north later becoming Frank Pusateri’s Restaurant and the Checker Cab Company. Through the 1930s, the north building housed a number of restaurants and soft drink shops. Daisy Bennett assumed the hotel and restaurant by 1940, while the north building was all taken over by the Yellow Cab Company, which also owned Checker Cabs. By the 1950s the hotel had become mostly occupied by railroad workers while the restaurant, open 24 hours a day, was a favorite of university students, who affectionately referred to it as the Café Benét, as well as railroad passengers. An ad in 1960 showed the Bennett Hotel as being established in 1884.

Eddie Fristoe assumed both café and hotel as what was named Eddie’s Bluebird Restaurant and Hotel about 1965, then it sat empty in 1970 before becoming the Russian Inn and Tavern in1975 and later the Side Track Tavern with no indication that the second and third floor were occupied.

Building collapse and rescue operations after deadly floods in India

Building collapse and rescue operations after deadly floods in India

Jim McKee: From Germantown to Garland

Germantown and Berlin, Nebraska, both had their names Americanized with patriotic zeal becoming Garland and Otoe in the wake of World War I. B…

Jim McKee: Grocery shopping then and now in Lincoln

In the early 1860s, during Nebraska’s territorial days, when Lincoln was known as Lancaster, there was nothing on the block at the northeast c…

One of the most confusing Nebraska towns to trace is Alexandria, which had three names, was located in three counties and briefly served as a …

Although, like many Nebraska “firsts,” the first flouring mills were at Fort Atkinson and Mormon Winter Quarters at Florence in 1847, but with…

Five years before Nebraska even existed as a territory and permanent settlement became legal, Nebraska was crossed with heavily travelled trai…

After the close of the Civil War, westward expansion of Nebraska was spurred by land grants extended to Union soldiers. This brought farmers a…

Street names, though originally unimaginatively assigned from lists of presidents and trees or numbered and lettered as in Lincoln’s case, bec…

For several decades, beginning in the 1870s, as farmers and settlers moved into Nebraska, the railroads initiated the majority of the towns th…

Most of Nebraska’s towns are named for people, but the second largest source is from a local “descriptive.”

Like all “firsts,” the first high school in Lincoln becomes a matter of definition.