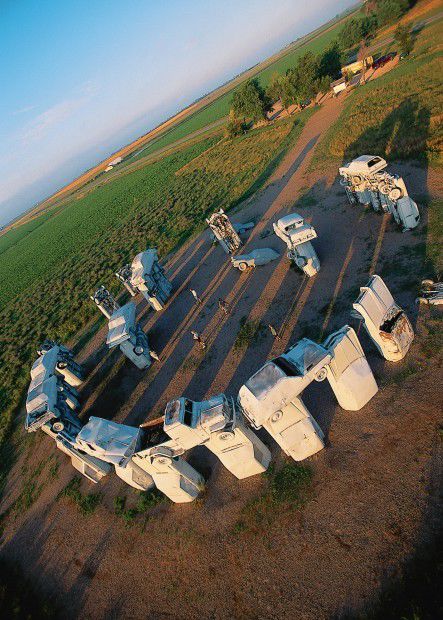 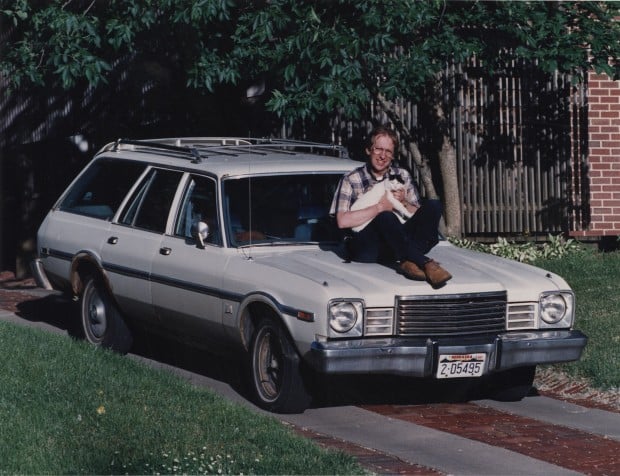 In this 1993 file photo, Bob Hanna sits with his cat, 'Spuds,' on the hood of his Dodge, from where he sketched much of the state's countryside. (LJS file) 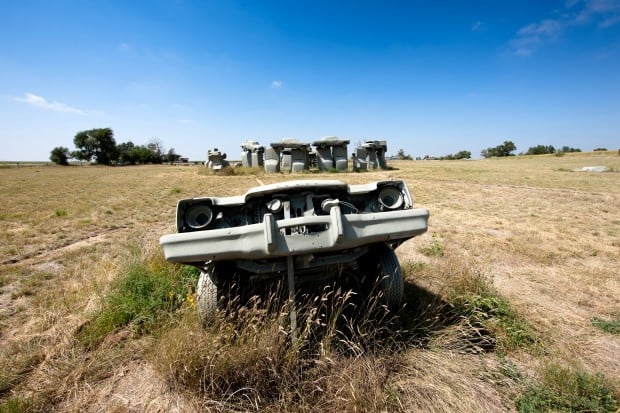 Carhenge, one of Nebraska's most popular, strangest tourist attractions, is for sale.

The Friends of Carhenge, a nonprofit group that has owned the Stonehenge-esque attraction since 1994, has listed the monument and its 10 acres just outside of Alliance with James Land Co. in Saratoga, Wyo. Asking price: $300,000.

Carhenge is a replica of Stonehenge, a prehistoric monument on Salisbury Plain in Wiltshire, England. More than 800,000 people visit the circle of stones in Great Britain each year, with many thousands dropping in during the summer solstice.

About 80,000 people a year go to the not-so ancient Carhenge about two miles north of Alliance along U.S. 385 in the Panhandle.

Artist James Reinders created Carhenge out of old cars during a family reunion in 1987. He buried many of the 38 vehicles and placed the rest on top to form a circle to emulate Stonehenge. All of the cars are painted gray.

Marcia Buck, president of The Friends of Carhenge, said the group wants to sell because, as a nonprofit, it doesn't have the financial resources or time to take Carhenge to the next level.

"Because we are somewhat limited in money, we can't develop the land as we should," she said Wednesday.

Carhenge could attract more visitors and help the economy of Alliance if it had other amenities including an RV campground, ice cream shop, gas station, convenience store and go-cart track, she said.

"We have no money so we can't take it to that level," Buck said.

Now, visitors can stop in a gift shop built about seven years ago with the help of a state tourism grant. The shop and adjacent parking lot are included in the sale offer.

Buck said most of the 80,000 people who visit Carhenge do so in the summer, but it's open 24 hours a day, every day. Admission is free.

On July 1, the gift shop's registration book had signatures from 24 countries and 48 states, she said.

Liz Lee, a past president of The Friends of Carhenge, said it's too bad the attraction is on the market.

"Well, it makes me sad, but on the other hand, I understand it. Basically, it's in a small-town community that has never totally understood the gift horse they were given," she said.

Lee said Alliance is an agricultural and railroad community that never has really embraced Carhenge. She's heard residents say, "Don't go to Carhenge, it's just a bunch of junk cars."

She said people outside of Alliance seem to appreciate it more. She hopes the new owner will continue the legacy.

"People go out of their way -- hundreds and literally thousands of miles to see this," Lee said. "It's a wonderful thing ... it's an asset that attracts people to our community. We're in the middle of nowhere. It's nice to have that draw."

Creed James, an associate broker with James Land Co., said they just signed the documents for the Carhenge listing and haven't developed a marketing plan. He said they will take photographs and shoot a video this week for possible use on the Internet.

Proceeds from the sale would be used to pay off a small operating loan the group takes out each year, Buck said. The rest of the money would be earmarked for scholarships for students with an interest in art and to promote tourism in the Alliance area.

Buck said if the group doesn't find a buyer, it will continue to take care of Carhenge, including periodic maintenance of the non-moving vehicles. Occasionally, things fall off and need to be put back into place.

"The damn things break down even when they are struck in the ground," Buck said with a laugh.

Epilogue: The long, strange trip of one Carhenge car

Bob Hannah paid $4,000 for his mobile art studio in the early '80s. He could sketch from it, sleep in it, roll down the road in it. For the next dozen years, it carried him to every corner of the state. Then, in 1993, he deposited it in a hole north of Alliance.

In this 1993 file photo, Bob Hanna sits with his cat, 'Spuds,' on the hood of his Dodge, from where he sketched much of the state's countryside. (LJS file)