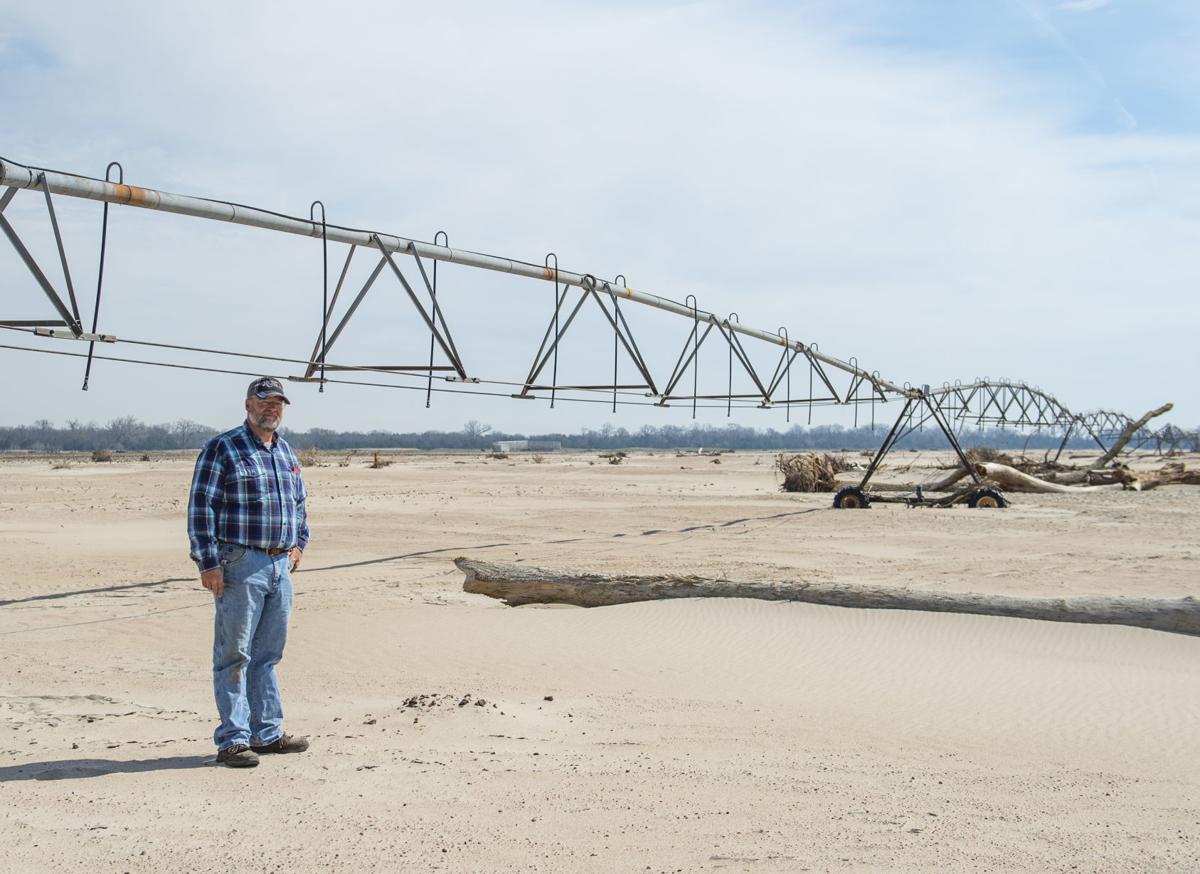 The flooding Platte River turned Drew Wolfe's 200-acre cornfield into a 200-acre sandy beach. In some places, the sand is up to 5 feet deep. 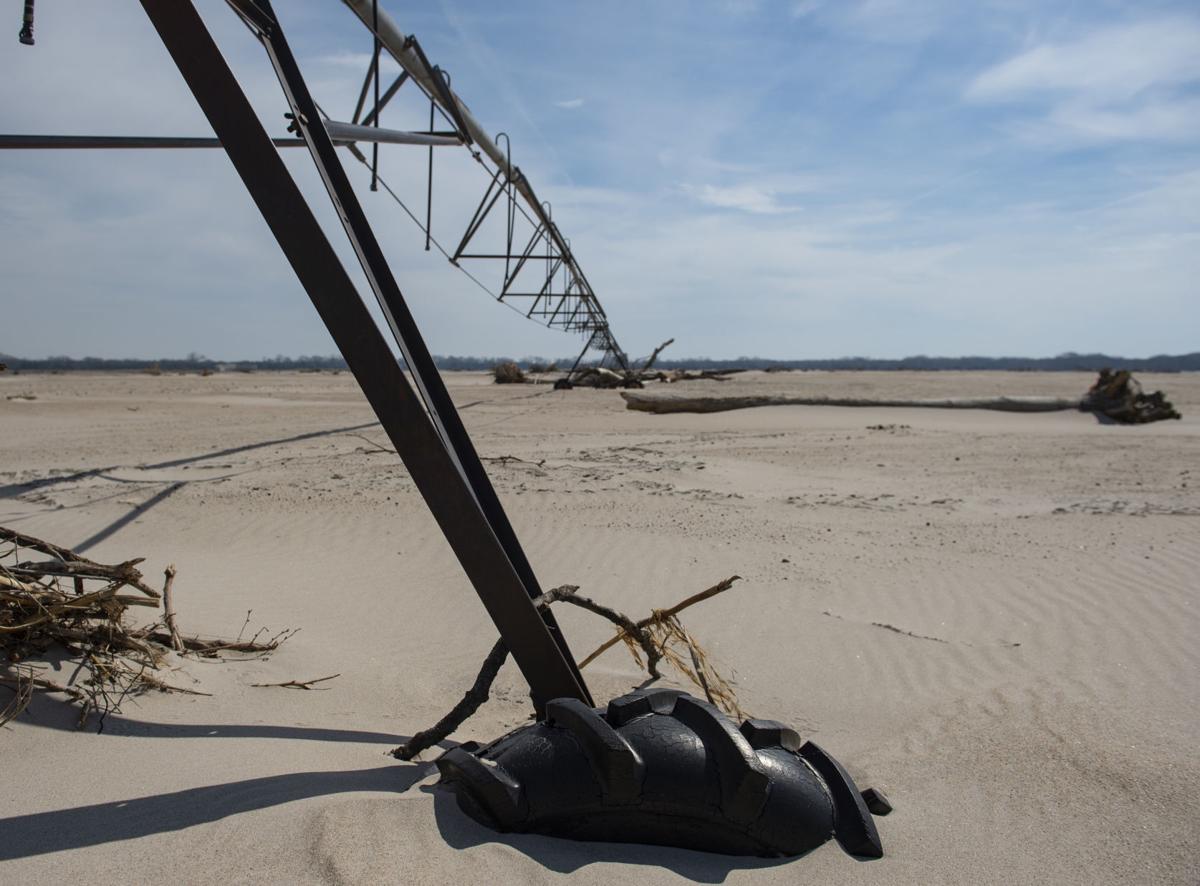 The sand was so deep on Drew Wolfe's land it nearly tops the tires of his center-pivot. 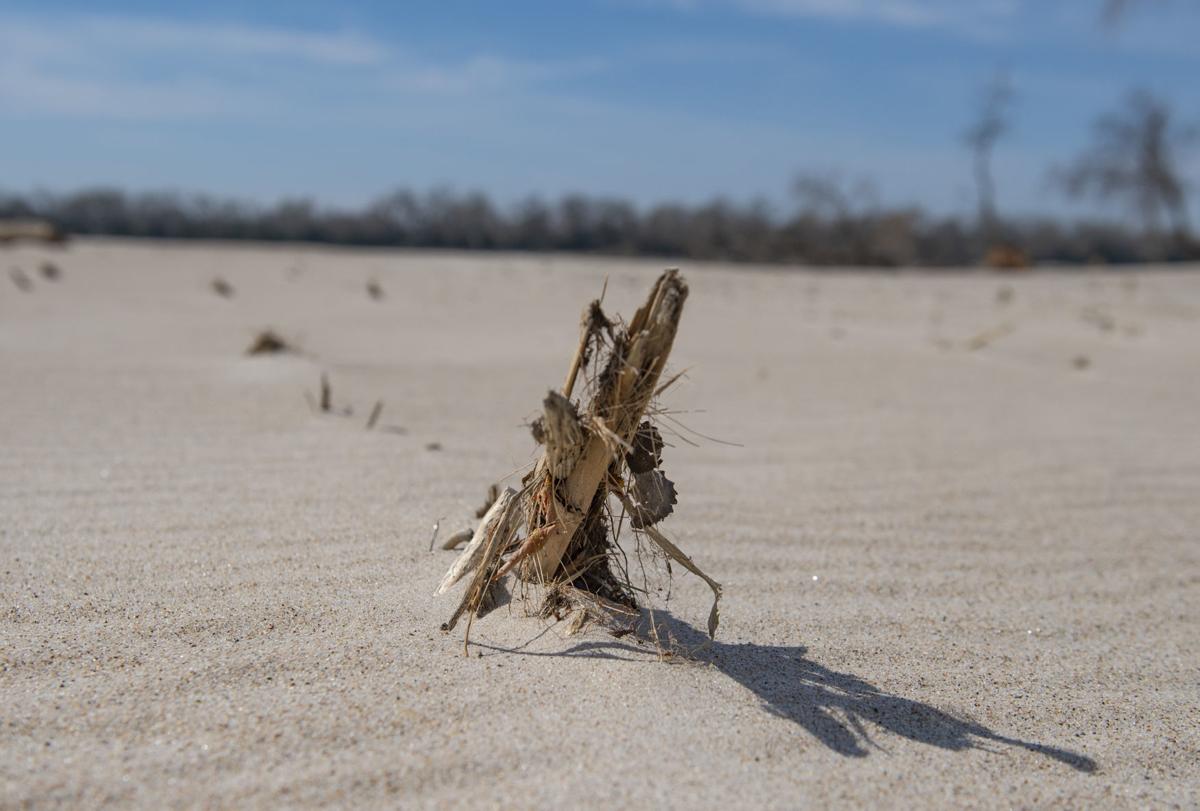 A cornstalk pokes through sand left behind after floodwaters receded on Drew Wolfe's farm last spring. 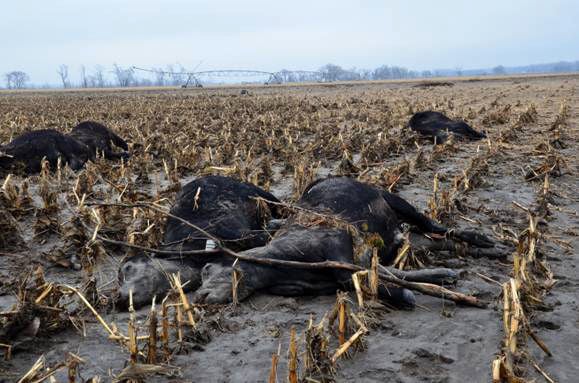 Dozens of Drew Wolfe’s cows ended up downstream and dead in a neighbor’s field. He lost more than 1,000 head in last year's flood.

The trip to Drew and Kristi Wolfe’s Colfax County farm isn’t easy — a rutted road out of Richland, gravel to their driveway, dirt to their house along the Platte River.

But a year ago, people kept coming. A U.S. senator. A state senator. The undersecretary of agriculture from Washington. The state ag director from Lincoln. The president of the Farm Bureau. The Cattlemen’s Association.

They all witnessed devastation beyond proportion, a farm hit so hard by flooding it took some time for Drew Wolfe to quantify the losses.

He can now. More than 1,000 cows killed. Better than half their ground now either under water, rendered sterile by sand, scoured out or pockmarked with holes and gullies.

“There’s over 500 acres that it would take heavy equipment to get it back,” he said.

He can talk about that loss, how the Platte shifted its very course a year ago, and instead of flowing past their farm, it now flows over it.

They lost another 200 acres to river sand, so deep in some spots it nearly topped the tires of the center pivot and covered their four-strand barbed wire fence. That land used to produce enough corn to feed their cows.

They scraped some of it away last year, and found the real damage. Before the river left so much sand, it robbed the ground of its ability to produce.

$1.2 million cost to clean pasture just one of many flood woes on Colfax County farm

“We lost all the organic matter, all the topsoil. The only thing that’s left is the dark hardpan. There’s no fertile soil left.”

Wolfe can go on. The water coursed through their trucks, their calving barn, their pens, bunkhouse and office.

The Platte returned to its banks months ago, but the flood is still keeping him busy. Scheduling a plumber to repair more of last year’s damage, keeping cows at a neighbor’s, fixing fence.

“Every day, it’s something,” he said late last week. “Right now, I’m hauling hay, and we wouldn’t be hauling feed in if we could raise our own.”

But Wolfe can also talk about what his family gained, too.

After the dignitaries made the trip, the help showed up.

Teenage volunteers from Nebraska, Iowa, Michigan and Kansas, more than 100 of them, willing to pick up sticks and pull up fence posts and roll up wire. Neighbors who helped load the dead cattle and round up the live ones. Nebraska National Guard members who dropped bales from a Chinook helicopter to feed the family’s stranded animals. Donations from the Dakotas.

“It was overwhelming,” Wolfe said. “You feel like there’s hope for humanity. Despite what happened, there’s good people out there.”

And this time of year, even on his flood-scarred farm, there’s also a sign of rebirth. New calves.

“It’s a sign of hope. Spring’s here, and another year is on its way.”

Two years ago: Photos, videos from catastrophic flooding in Nebraska

2019 FLOODS: 'You half blame yourself' — Mourning the cows in northeast Nebraska

Jeremy Mahon figures the flood cost his farm nearly $500,000. But it's the loss of his cows that gets to him the most.

Crew members recall the mission’s challenges and the decision to try to pull all seven men up 75 feet to safety.

Attention travelers: A light glaze of ice will be followed by snow accumulations of up to 6 inches by Friday morning. Wind gusts as high as 50 mph are expected.

Columbus-area veterinarians look back at flood, hope for better days

Veterinarians Ryan and June Loseke found there were fewer pregnant cattle as a result of the flooding. There are also lameness issues with livestock that the pair are still trying to rehab.

Ben and Erin Schroeder just wrapped up their first season starring in “Heartland Docs, DVM,” a series on the National Geographic channel.

The Corps said in a written statement that it has awarded a $1.68 million construction contract to repair a levee system between Valley and Fremont.

The iconic large cowboy boots that for years sat outside Columbus’ T-Bone Truck Stop and became a tourist stop for many driving by were recently remounted with a new-and-improved look.

A Nebraska National Guard helicopter crew has received the 2019 DUSTOFF Rescue of the Year award for their recovery of seven firefighters from the floodwaters of the Elkhorn River last year.

Areas of northeast Nebraska and the Panhandle are experiencing severe drought conditions, with rainfall totals several inches below average for the year.

The U.S. Army Corps of Engineers said Thursday that this year could be the 10th driest year on record along the river.

"We were averaging, in some areas, 2 to 4 inches an hour," said meteorologist Dirk Petersen. "The storm drains in an urban area just couldn't keep up with the rains fast enough."

The flooding Platte River turned Drew Wolfe's 200-acre cornfield into a 200-acre sandy beach. In some places, the sand is up to 5 feet deep.

The sand was so deep on Drew Wolfe's land it nearly tops the tires of his center-pivot.

A cornstalk pokes through sand left behind after floodwaters receded on Drew Wolfe's farm last spring.

Dozens of Drew Wolfe’s cows ended up downstream and dead in a neighbor’s field. He lost more than 1,000 head in last year's flood.