Albert Reitz was mowing his lawn after work on Monday when he felt it.

“I felt suction behind me and a little bit of movement under my feet. I looked behind me and I was only a foot away from” a sinkhole, he said Friday as movers were packing his home in Blackhawk.

The sinkhole collapse at 5:30 p.m. that day broke water and sewer lines that further ate away at the earth, widening the hole in the Hideaway Hills subdivision to 40 by 50 feet.

“It was going into a bottomless pit,” said 40-year-old John Trudo, who realized something was wrong when his sink faucet didn't work and then heard Reitz banging on his door.

Trudo’s wife, Erika, called 911 and first responders evacuated six families that evening after a second, smaller sinkhole was discovered across the street.

The evacuations continued when cavers explored the sinkhole Wednesday and Thursday and found it opened into an abandoned gypsum mine that’s at least 600 feet long and filled with holes from drilling and mining equipment.

“I really never imagined that when we went back down there it would be that big,” said Adam Weaver, a member of Paha Sapa Grotto, a local caving group.

Six more homes were evacuated after the mine was discovered, said Doug Huntrods, emergency manager for Meade County. Between 30 and 35 people have now been evacuated he said Friday while standing in front of the roped-off sinkhole that straddles Trudo's and Retiz's yards and sidewalk.

The dozen evacuated households from the tight-knit neighborhood now face financial worries and uncertainty over whether they’ll be able to return to their homes.

“We want to know what kind of compensation are we going to get for this because this is draining our pocketbooks,” said Reitz, who’s been living in a hotel with his fiancée, Lori Erickson Kiehn.

Reitz says he feels especially sad for a young couple who moved in last month after signing a 30-year mortgage. His sister — who came from Aberdeen to help him pack — said she feels bad for an older veteran who doesn’t have family nearby to help him move.

Reitz, whose fiancée bought their house in 2005 as the development was being finished, said he’s been noticing sinking and splitting areas developing in his yard and garage for the past year. He assumed it was a construction problem, not geological.

“You wouldn’t think that there would be a big mine underneath you,” he said Friday.

After the sinkhole appeared, Reitz said he banged on Trudo’s door to tell him to move his truck.

Trudo said he quickly moved his pickup from the area, which later collapsed.

Reitz and Trudo aren’t the only friendly neighbors in the Hideaway Hills community.

“This is kind of like a family out here,” said Reitz. “We're all friends, we all look after each other's houses, have fireworks out here every 4th.”

Both men called their insurance companies but were told the homes weren't covered since their policies didn't address underground issues created by sinkholes.

“I don’t think they can fix the problem,” Trudo said. “If it gets worse, we’ll never get back into our house so we’re completely vacating.”

Reitz said the Red Cross covered the cost of two nights in a hotel but he and his fiancée are now paying out-of-pocket. Trudo said he, Erika, their two children and their Great Dane are living with relatives but that’s a temporary solution. He said he’s worried about finding a place that will welcome his 150-pound dog.

“People's homes are at stake and we're going to do what we can to assist them throughout this process to seek state or federal aid,” said Huntrods, who described himself as the “conduit” between the residents and government agencies.

Huntrods said he’s been in contact with local, state and federal officials and is exploring grants through FEMA or even mine reclamation funds.

Huntrods said the gypsum mine was owned by the Dakota Plaster Company.

The Journal and other local papers reported as early as 1910 on the opening of the Dakota Plaster Plant in Blackhawk, archives show. And mindat.org, a nonprofit mining information organization, places the old mine on East Daisy Drive exactly where the sinkhole is.

It’s unclear when the mine closed.

Weaver, who explored the cave for four hours Thursday, said the mine ranges from just 25 to 30 feet below ground.

That’s “part of the problem,” he said.

The sinkholes are developing because ground and surface water has been eating away at the gypsum, which is “incredibly water soluble,” said Weaver, a GIS analyst for Rapid City and former hydrologist for the U.S. Forest Service.

“Building on top of gypsum is a bad idea,” especially when it’s already hollowed out from a mine, he said.

Weaver and fellow spelunkers used lasers to measure and map the cave, which is 150 feet wide in the biggest cavern and at least 600 feet long. He said the mine may be longer, but there are collapsed and unstable areas too dangerous to explore.

Weaver said the underground area was “very obviously a mine” due to old drill holes and leftover parts from a railroad and railcar.

He said columns and a pool of water are inside the mine, which is about 50 degrees and shines due to the gypsum.

Weaver also found old vehicles in the cave. Huntrods said older residents in the county have told him the area was a dump or a landfill at some point.

Huntrods said construction on the subdivision began in 1992 and was finished in a few years. He provided the name of the developer but the Journal couldn't find any information about the company online.

Huntrods said he's examining old aerial photographs and Google Earth images to see if other homes are at risk. He also said the Equalization and Planning Office is going through its records — which were only on paper at the time — to determine the development's history and regulations at the time.

Trudo said he wants to know if developers or a government agency knew the community was being built on top of an old mine. “Did they know they should not have built on this and somebody turned a blind eye so somebody could make a dollar?”

A car inside the mine

A pool of water inside the mine

Caver Adam Weaver lowers himself into the mine

Another view of the sinkhole

A vehicle bumper in a smaller sinkhole

South Dakota county investigating development of homes built over mine; DOT to inspect I-90

Meade County is investigating the history of a Black Hawk subdivision after sinkholes exposed an abandoned mine, forcing a dozen families to evacuate. 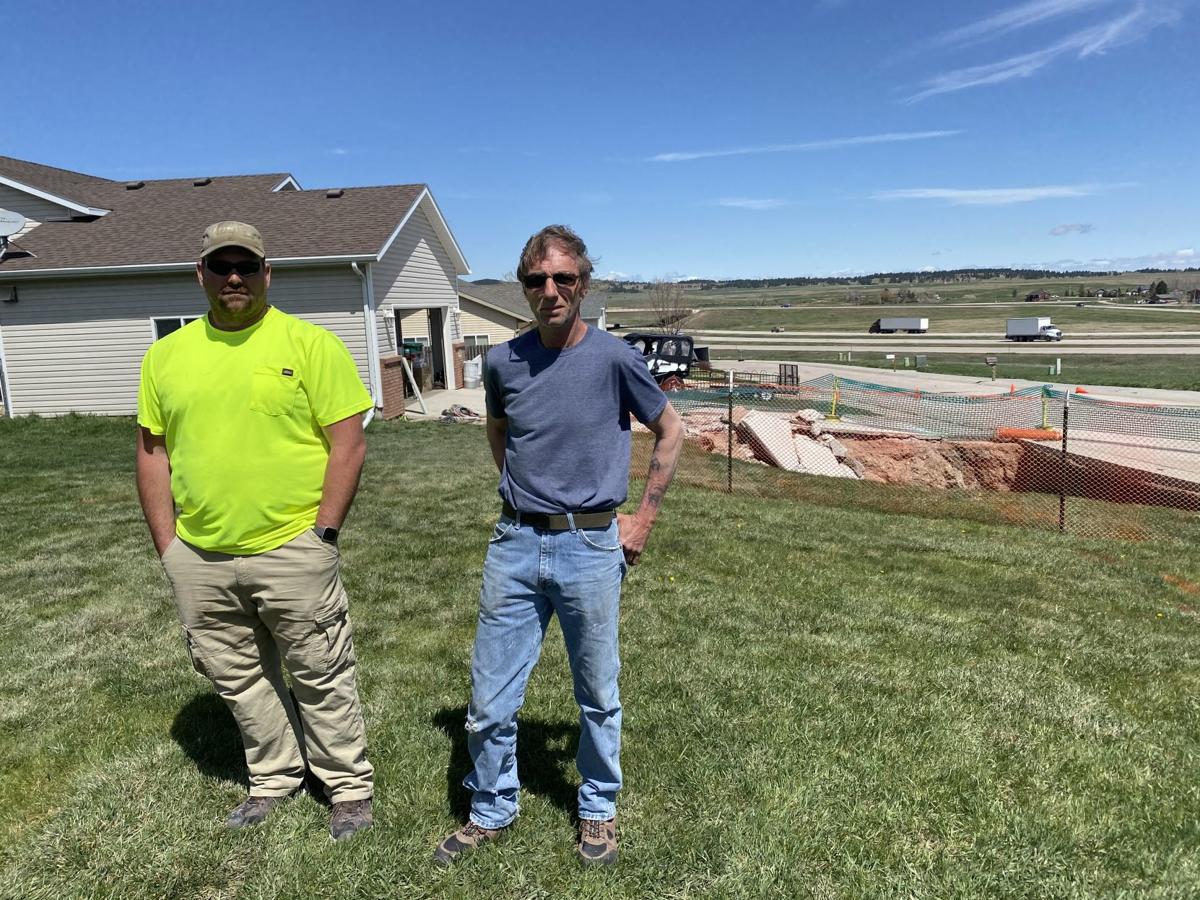 John Trudo, left, and Albert Reitz stand before the sinkhole between their homes that leads to an abandoned gypsum mine below. 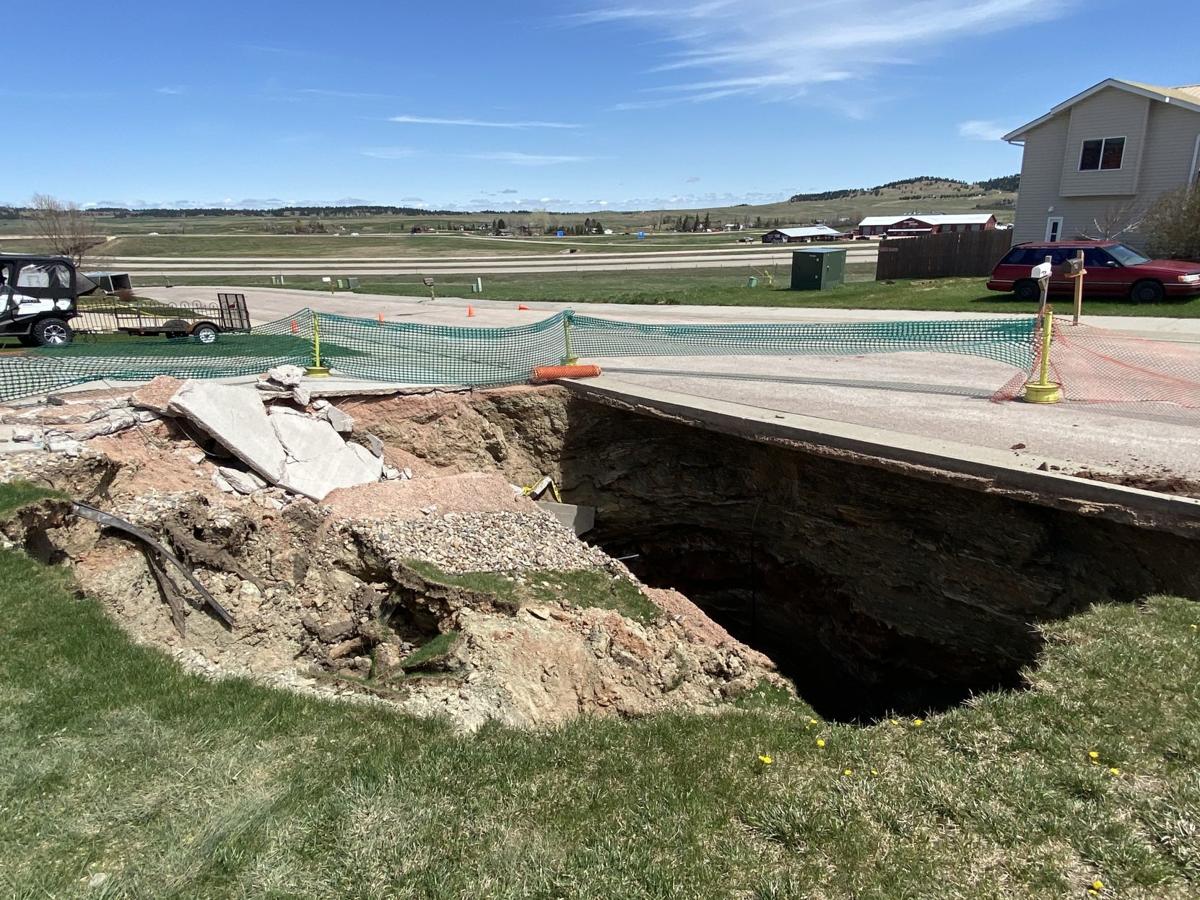 The sinkhole entrance in a Blackhawk neighborhood. 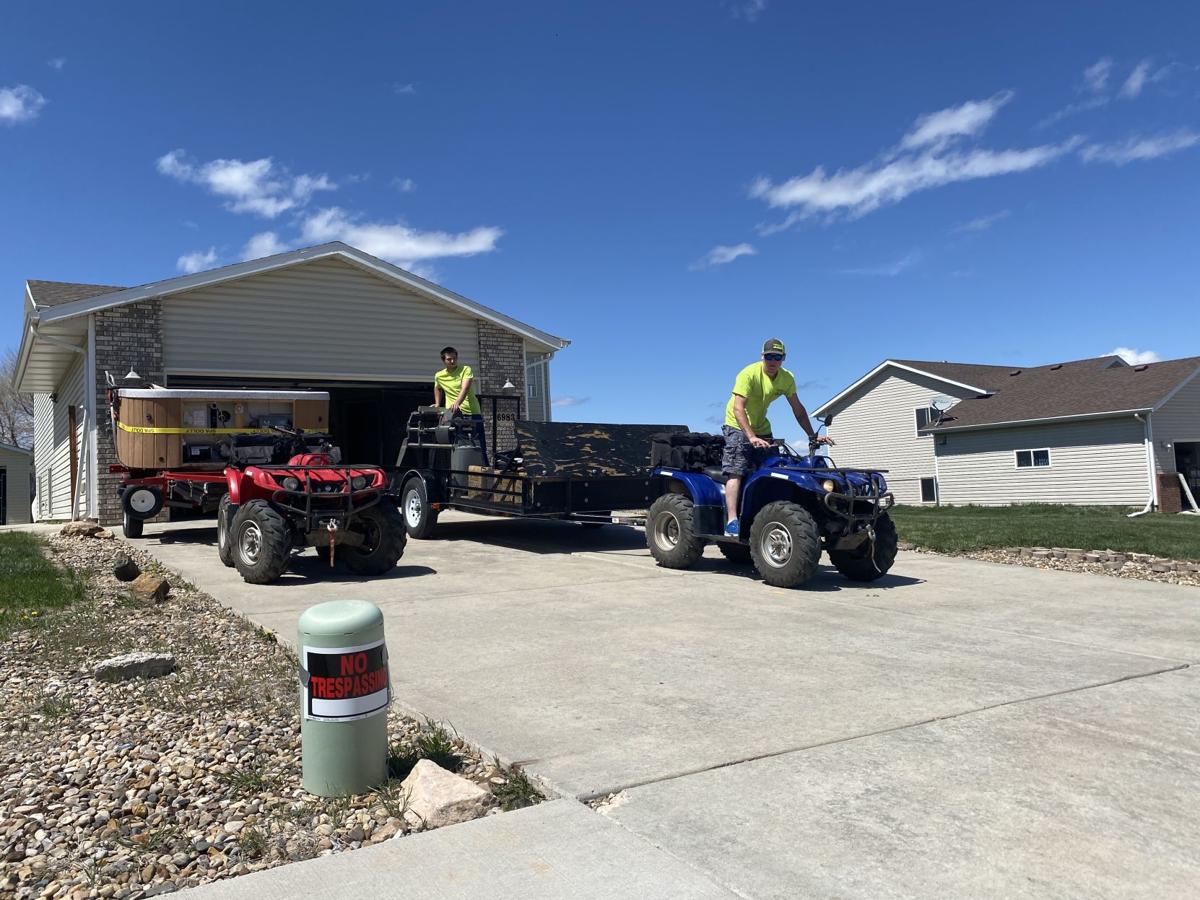 Workers move items out of Albert Reitz's home on Friday after he had to evacuate.