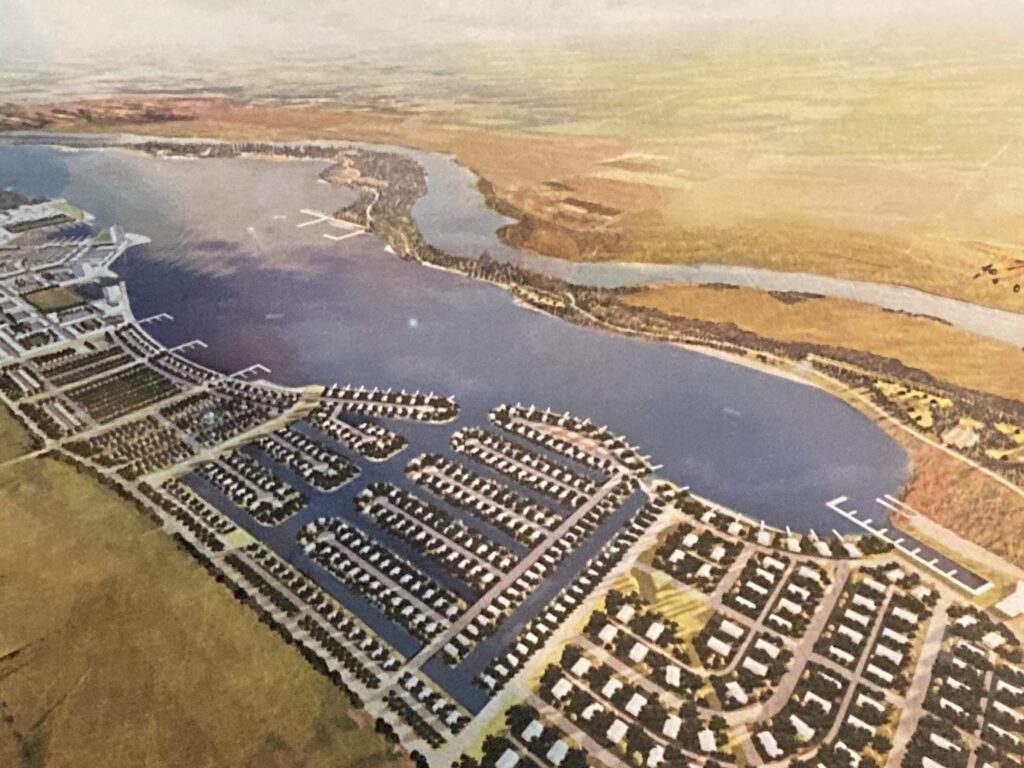 A possible 4,000-acre sandpit lake could be carved between Omaha and Lincoln. (Courtesy of PlanPreservePlayNE.com)

OMAHA — The thought of a $1.83 billion economic impact and plenty of real estate development potential has local builders eager to push the idea of a 4,000-acre recreational lake in Nebraska.

After a state senator provided a progress report, members of the Metro Omaha Builders Association told the Nebraska Examiner they stand ready to do their part to get the project across the finish line. 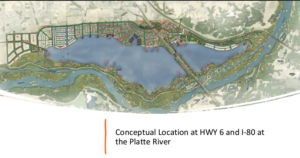 Another shot of the site most discussed for a big lake between Lincoln and Omaha, as shown to MOBA during update by State Sen. Mike McDonnell.

That could include touting the value of a proposed seven-mile-long sandpit lake both within their industry and at more public events such as the Street of Dreams.

“There is tremendous opportunity for private development and not necessarily only along the shoreline,” said past MOBA president Greg Frazell of G. Lee Homes. “Nebraska needs something — and we’ll never have mountains.”

On the big screen

Frazell was among some 150 MOBA members who heard State Sen. Mike McDonnell of Omaha present highlights of the big lake proposal that emerged last year from a special legislative study.

Led by State Sen. Mike Hilgers of Lincoln, that study and the “STARWARS” committee explored ways to perk up recreation, economic development and population. (The acronym stands for the Statewide Tourism and Recreational Water Access and Resource Sustainability committee.)

Many steps are ahead of any approval, including a vote on a location, McDonnell acknowledged.

But he presented a conceptual plan spotlighting what’s been called the preferred site for carving out the lake, between Nebraska’s two biggest cities, adjacent to the Lower Platte River at Highway 6 and Interstate 80.

Estimates early on put investment at more than $1 billion, the bulk coming from private investment.

McDonnell told the MOBA group gathered this past Thursday at an Elkhorn theater that the economic impact of the preferred site could reach $1.83 billion. He said the east shore alone would generate $525 million in real estate value if valued like Lake Okoboji.

Brett Clarke of Frontier Builders, current MOBA president, said in an interview that he sees “years and years” of ongoing development if the lake materializes.

“I think you’ll see demand through the roof for those lakefront properties,” he said, adding that there is local thirst for more luxury houses in the price point of $1 million and above. 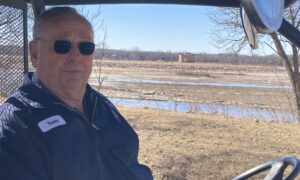 Terry Newland wonders if the proposed big lake means he loses his home along the Platte River. In the background is a well operated by the Lincoln Water System in the middle of the river. (Paul Hammel/Nebraska Examiner)

Ryan Krejci, owner of Ideal Designs Custom Homes, pointed to high demand at a newer lakefront subdivision west of Omaha, where lots alone can sell for $400,000 and higher.

“Put water anywhere and a house next to it — it’s as good as gold,” he said.

Krejci, Clarke and other MOBA board members said, though, that they see the vision succeeding only with public access to the water and a variety of less expensive lodging and home options on the lake’s edge and in surrounding areas.

Clarke pointed to lakes of Okoboji and the Ozarks, saying those offer housing of all types within a stone’s throw.

“A lake this size is going to take all kinds of people — and a lot of people,” Clarke said.

He believes a selling point would be preservation of the character of surrounding towns such as Ashland.

Said Clarke:  “If this place becomes over-commercialized, I don’t think that fits the vibe here (in Nebraska).”

That said, he and others noted the potential for commercial development that could include doughnut shops, restaurants, boutiques and other retailers and entertainment.

In his PowerPoint presentation, McDonnell noted a study by the Omaha-based HDR design, architecture and engineering firm that imagined how land west of 234th Street could be developed.

Though a reservoir idea has percolated for decades — as far back as 1896, said McDonnell — the latest iteration has caught on in part because it does not involve damming the Platte and because the state has excess funds and federal stimulus money.

The lake possibility has drawn some criticism, in part from people worried that they’d be pushed off their property through eminent domain. That’s a legal route a government can use to force the sale of land for a public purpose. A fear is that owners would get less than what their homes and land are worth. 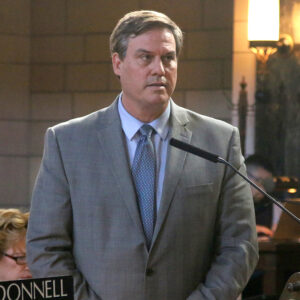 McDonnell told the builders group he sees eminent domain as a possible path: “Is eminent domain going to be taken off the table? No, it’s not. And it never will be by me.”

McDonnell said the committee has promised to look at sites other than the one most discussed, an expanse of flat farmland and sand pits near Sarpy County’s Linoma Beach.

“We are bringing legislation forward in January to discuss some of that fairness on possibly future value of acres, of land, and also the idea of what other locations could we possibly be looking at,” he said.

A bill signed into law in the last legislative session set aside $20 million to study whether the big lake is even feasible and allocated another $26 million toward construction.

Asked about the time frame, McDonnell told the group six or seven years, if the location at hand was approved by the Legislature.

Officials with the Lincoln Water System and Metropolitan Utilities District, which both have well fields near the preferred lake site to draw drinking water, have expressed concerns and earlier called for more study on the potential impact of the quality and quantity of groundwater.

Dave Vogtman, another MOBA board member who also represents the Home Company, said builders are waiting for the project to get farther along to better understand how they fit in.

“I think it would just be a boon to the local economy, Lincoln and Omaha,” he said, noting how many Nebraskans leave the state to enjoy other bodies of water.

MOBA members envision their counterpart home builders association in Lincoln also engaging in an effort to align Nebraskans and the construction and development industries behind the big lake.

A concern of Clarke’s, he said, is that the state could pull back in the face of challenges and that the project does not reach “full potential” in size, tax valuation and economic development and building opportunities.

“I hope they go for it,” said Clarke. 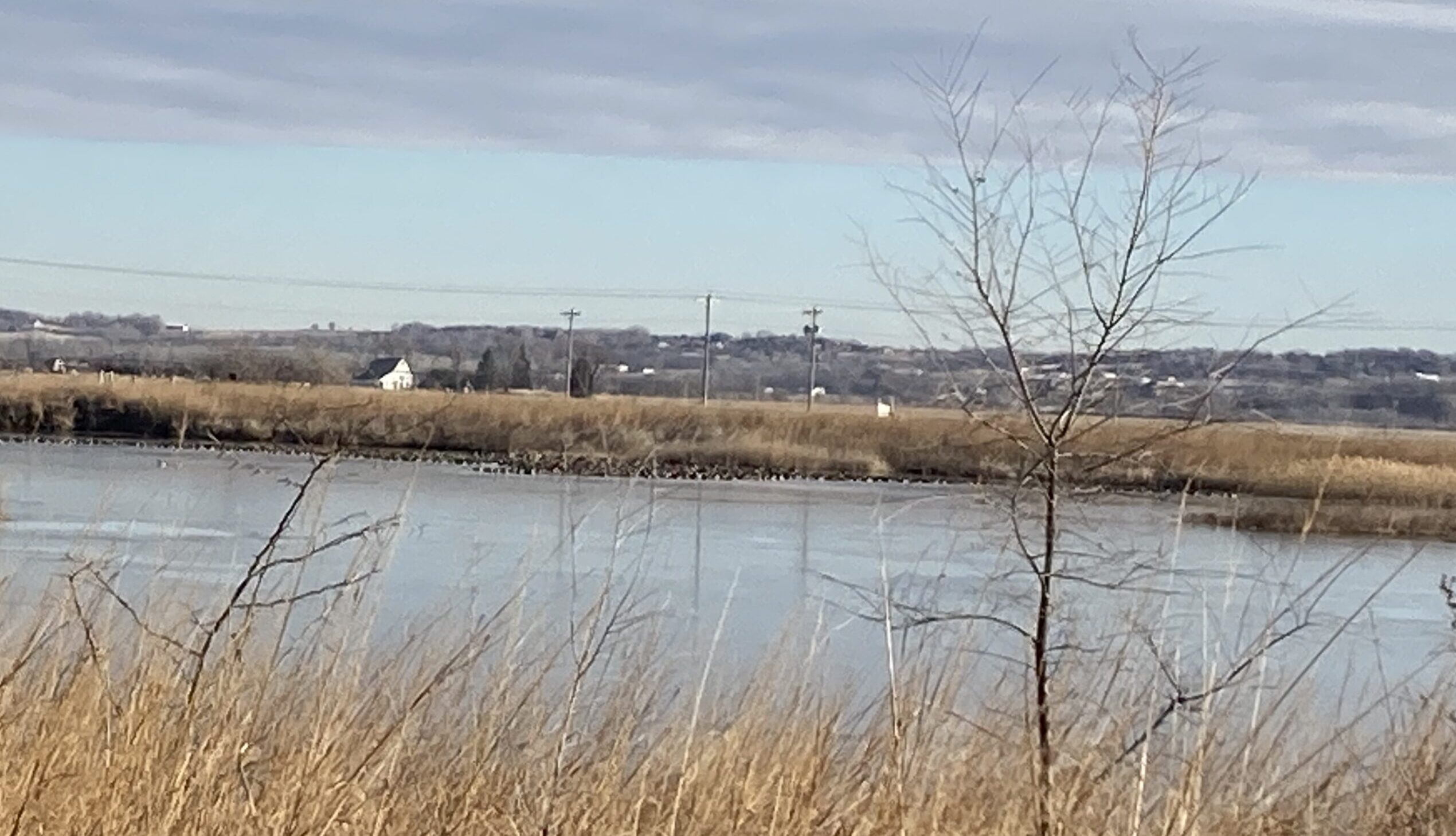 The site of a big lake for recreation, proposed by state legislators, already has a handful of sandpits and sits just west of Gretna, which is visible on the bluff in the distance. (Paul Hammel/Nebraska Examiner)

Originally published on nebraskaexaminer.com, part of the TownNews Content Exchange.

The Platte River is mostly dry upstream of Columbus, Nebraska