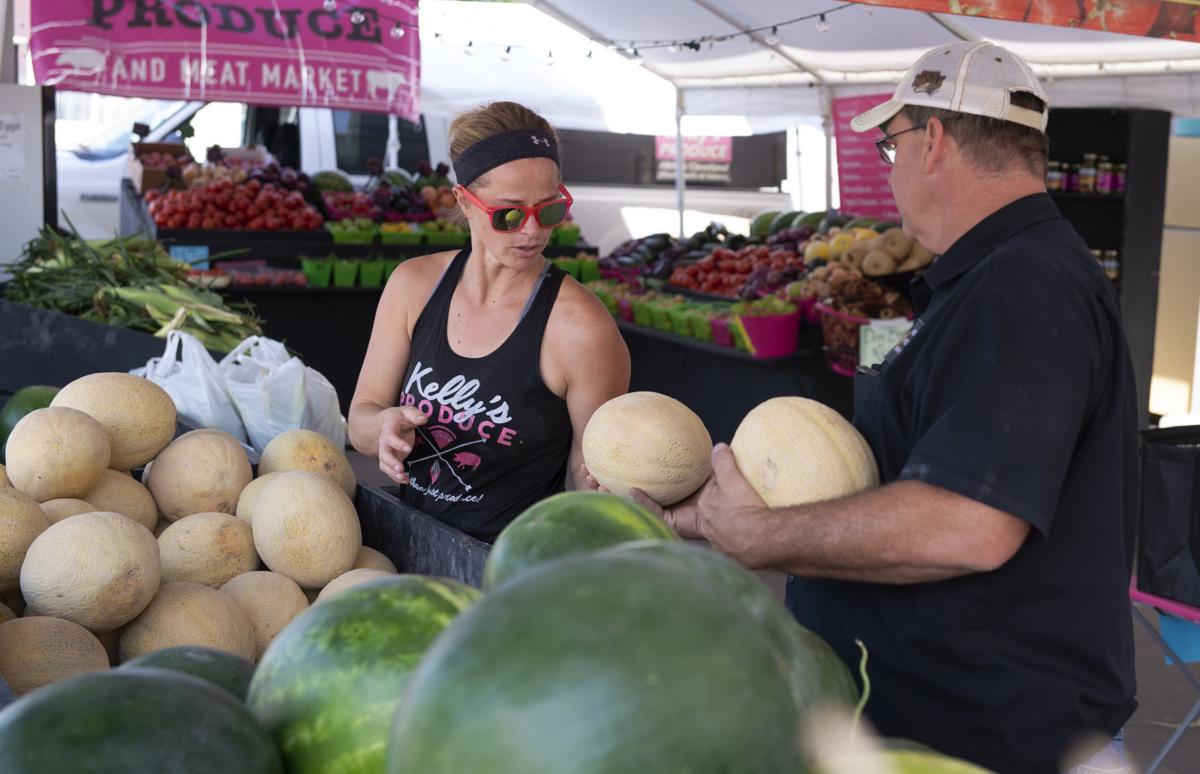 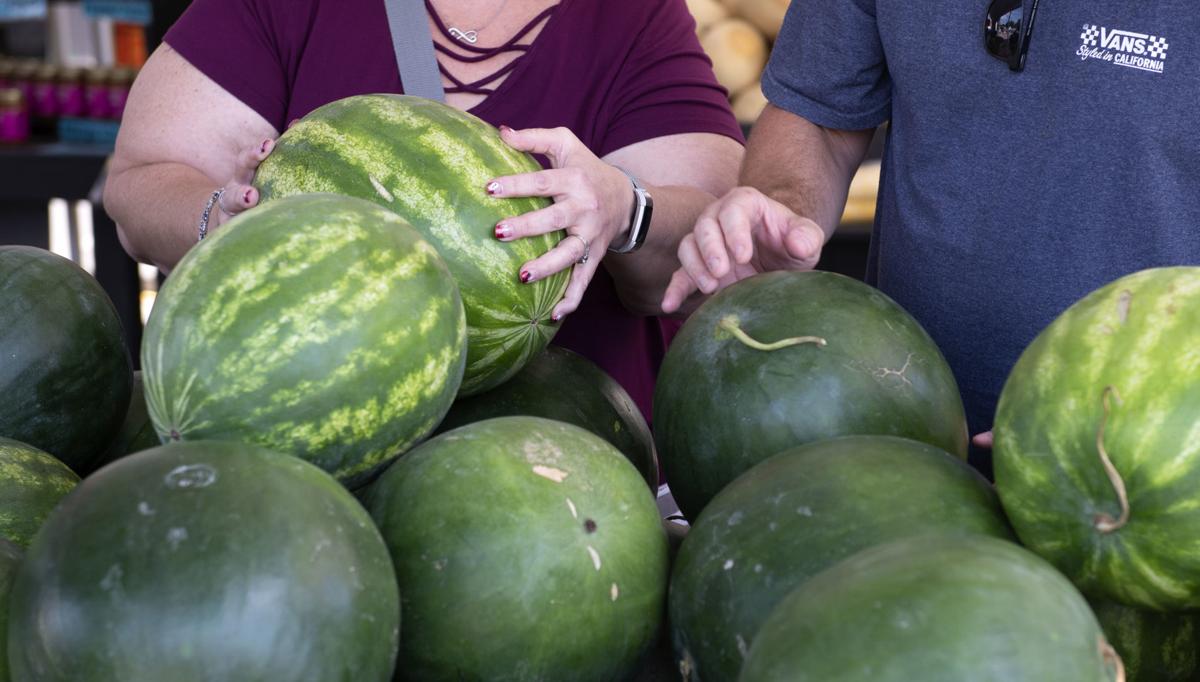 Customers check out the seedless watermelons on Friday at Kelly's Produce. 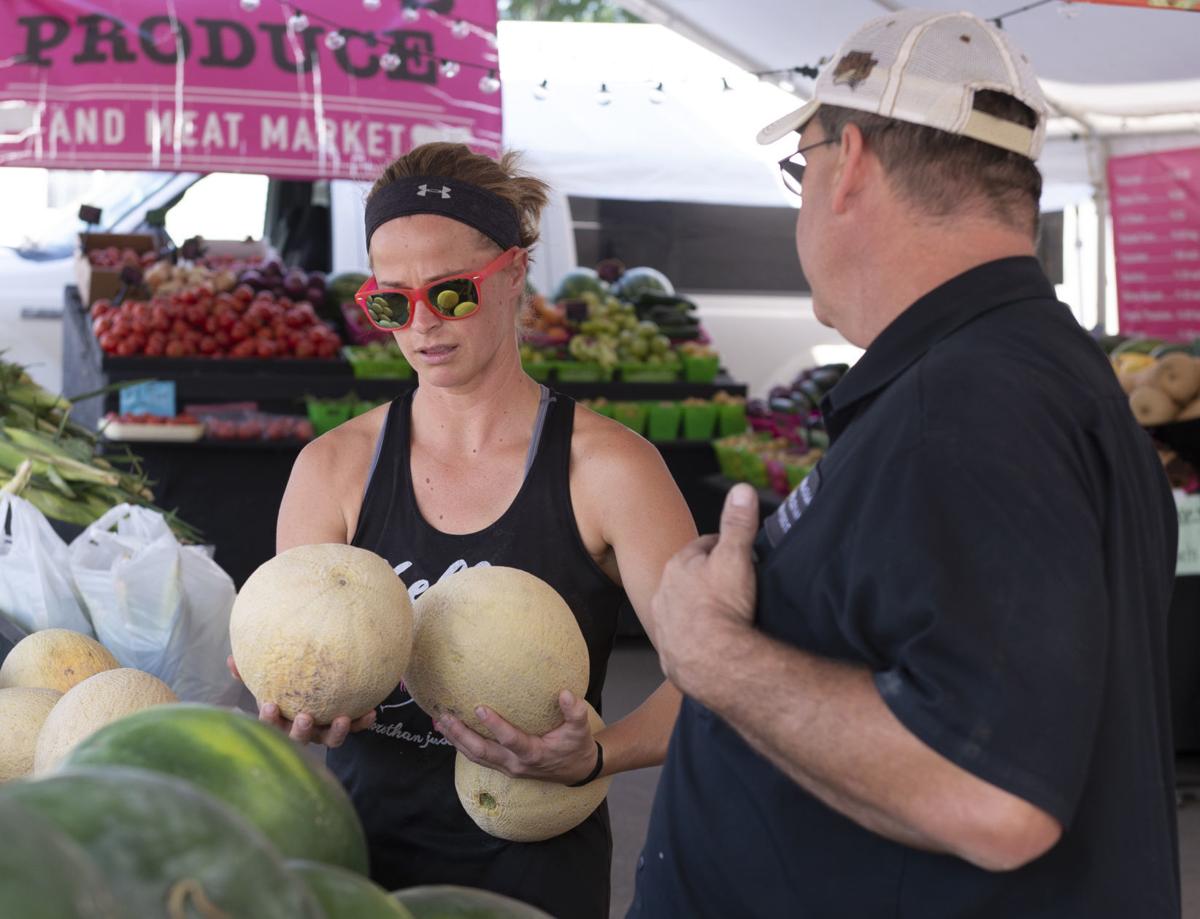 In fact, Lancaster and its bookends, Saunders and Gage counties, were three of six in the state in 2017, the year covered by the census, with the largest number of farms. Granted, they are a lot of smaller farms, but farms nonetheless.

* Number of farms down 3% over five years.

* Farm-related income down 44% over five years, while expenses are up 9%.

In that strip of southeastern Nebraska counties, about three-fourths of farms are less than 500 acres, with the majority of those less than 180 acres. A large farm is considered to be more than 1,000 acres with some closer to 2,000 or more. A large farm can be considered one with an income of at least $500,000.

The census showed that farm income continued to go down in Nebraska.

"Farm income has been falling, really, since 2013," said Brad Lubben, agricultural economist with the University of Nebraska-Lincoln. "That does have an impact, obviously, on the well-being of farm households, as well as the state economy, given that agriculture is estimated to be a fourth of the economy, a fourth of the employment."

In some senses, the ag sector output is growing, but the value of production has shrunk, he said.

Lubben said the majority of farms, in terms of numbers, are smaller operations with less than $100,000 in sales. And most of the small farms earn much less than that.

That's true not only in Nebraska, but across the country, he said.

Many smaller farms are "lifestyle" farms, including landowners who are technically retired, or those who farm as a hobby or as a weekend sideline. They are not the primary source of income for the landowner. They may have horses, some cattle or have a haying operation.

That's shown in the increase in the number of new enterprises such as vineyards and wineries, pumpkin patches, berry farms, cheesemaking enterprises and locally grown produce. And now, farmers are looking at hemp farming.

Those enterprises are geared toward serving what consumers are interested in and purchasing, Lubben said.

Some of that growth in those new enterprises comes from diversification.

Kelly Heldt Abbott brings her family produce operation to North 48th Street in Lincoln from Yutan 150 days of the year, and has been for 19 years, more recently converting a former gas station for her business.

In Saunders County, her family raises row crops, cattle and produce, dedicating about 55 acres to just produce, said Mike Heldt. The family owns about 550 acres and rents 1,700. Her mother, Deb Heldt, also has a produce business near Nebraska 2 on the corner of the Earl May parking lot.

Abbott's great-grandparents started the produce business when the crop market was down, selling cucumbers at a roadside stand. Abbott sells watermelon, cantaloupe, corn, tomatoes, peppers and other commodities.

Four families make a living from the farm, and they can't count on just the bean market or cattle market to cover their house payments at any given time, she said.

"So we're not putting all of our eggs in one basket," she said. "Farming can be super stressful if you're just putting it all in one area."

If Lancaster County has the most farms, Lubben said, it's a perfect illustration that the vast majority of farms are not being commercial ventures to sustain a family.

Farms classified as mid-sized operations are trending down in Nebraska, and in the rest of the country, becoming smaller, or disappearing into larger operations, Lubben said.

This is a tough time in general for farmers and ranchers, because of tariffs on agricultural products and loss of foreign markets for wheat, soybeans, corn, sorghum, alfalfa, dried beans, pork and dairy products. That doesn't include beef or hides and skins.

Nebraska's farmers and ranchers could lose close to $1 billion in revenue because of the trade war, the Nebraska Farm Bureau has estimated.

Heldt is hoping things will settle down when the issues get solved. He knows that farming is a multitude of cycles, both up and down.

"Right now there's just a lot of variables against farming, and most of it starts with the president's fight with China," he said. "It's a big deal."

"The world population is growing so the long term outlook in agriculture is very positive," Pryor said. "And we're in the breadbasket of the world right here in Nebraska. And we have a tremendous water resource, too."

But certain things need to happen right now, including solving the tariff situation and expansion of ethanol, he said.

Lubben said there's no doubt Nebraska has a comparative advantage in agricultural production.

"Our land resource base, our climate, our productivity, there's no doubt that we will continue to be a productive agricultural sector," Lubban said. "We're going through a downturn in terms of market prices and income potential, but that doesn't mean that we're going to shut down the factory, so to speak."

Trillions of cicadas about to emerge

Trillions of cicadas about to emerge

Ricketts says leader of Vietnam will come to Nebraska

Prime Minister Nguyen Xuan Phuc of Vietnam has accepted Gov. Pete Ricketts' invitation to come to Nebraska, the governor said Friday, and that…

Report: Nebraska farmers could lose close to $1B this year from tariffs

Nebraska's farmers and ranchers are on track to lose close to $1 billion in revenue this year because of tariffs on agricultural products, acc…

Winding up his trade mission to Vietnam and Japan on Monday, Gov. Pete Ricketts expressed optimism for a growing international market for Nebr…

Despite economic challenges and recent weather disasters, rural Nebraskans are more optimistic than they've ever been in the history of an ong…

Think Nebraskans are fat? State not the worst, but one-third of residents are obese

Nebraska could be No. 1, but in this case it should not want to be.

The once-every-decade effort to count every person in Nebraska now has a headquarters in Lincoln on Apples Way.

DES MOINES, Iowa — Some farm groups and farm-state lawmakers expressed anger at the Trump administration Thursday over final ethanol rules that they said failed to uphold the president's promises to the industry.

Interest grows in hemp as nutritional supplement for livestock

As research continues on the potential uses for hemp, producers are discovering two primary benefits for their livestock — CBD oil and hemp seed.

Aurora Cooperative Energy Co. on Thursday said it has agreed to buy out Pacific Ethanol's stake in a joint venture.

Customers check out the seedless watermelons on Friday at Kelly's Produce.