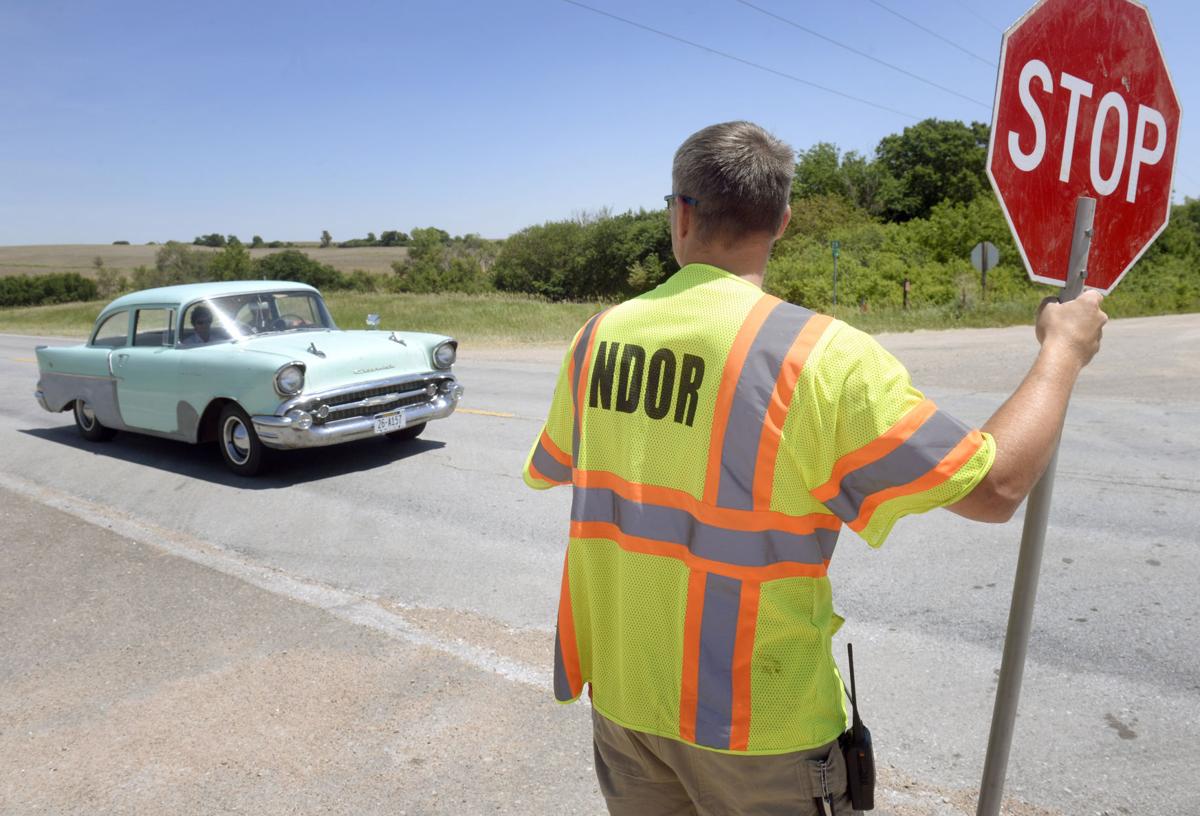 Nebraska Department of Roads maintenance worker Joshua Craig motions a car past at a project on Nebraska 79 north of Valparaiso last week. When the state Roads and Aeronautics departments merge to form the new Nebraska Department of Transportation next month, the agency doesn't plan to rush out and change all the signs, vehicle logos or safety vests to immediately reflect the name change. 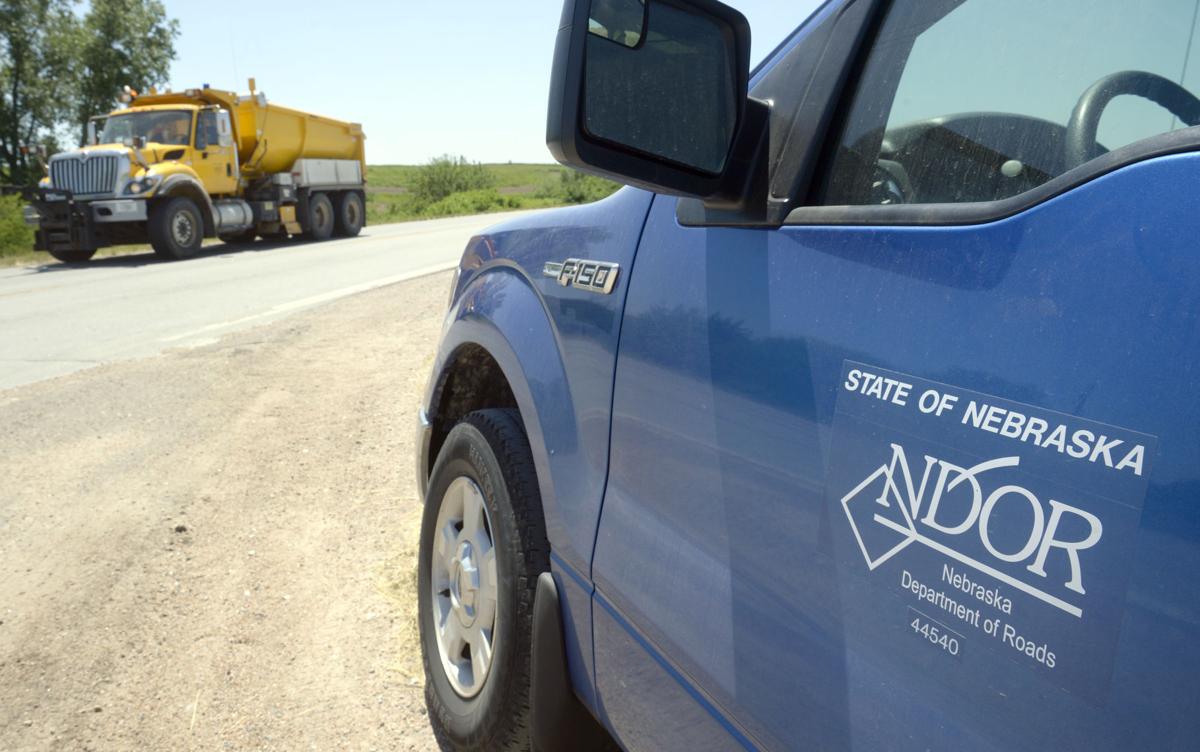 The Nebraska Department of Roads has 3,000 vehicles with its logos scattered across the state.

Call it rebranding on a budget.

When the state Roads and Aeronautics departments officially merge to form the new Nebraska Department of Transportation next month, they plan to do so without spending an extra penny.

That means leaving outdated logos on most of the 35 buildings, 300 free-standing signs and 3,000 vehicles the Roads Department has scattered across the state.

"We're not going to rush out and change stickers on hundreds if not thousands of vehicles on day one," said state Roads Director Kyle Schneweis, who will lead the new agency. "We'll be rolling out changes to those kinds of things as needed."

The name change, which happens July 1, is historic: Nebraska's Department of Roads is the last in the nation to ditch its asphalt-centric appellation for a more-inclusive title.

But it could take a year or two, maybe more, to phase out all signage from the days of Roads and Aeronautics, Schneweis said. In the meantime, agency leaders will do their best to avoid confusion among the public.

"Certainly, we need to be smart about it," Schneweis said. "Budget times are such that we need to be cautious and careful. In the end, we need to make sure people in Nebraska know who we are and what we're up to."

The merger was proposed by Gov. Pete Ricketts and approved by the Legislature in April.

Schneweis said the change will encourage Nebraska to "step away from (its) 10,000 miles of highways" and think about transportation more broadly.

"Our customer is not the road; our customers are the people and the businesses of our state," he said. "We're really changing how we think about our services, and so this is one piece of that puzzle."

There's no grand vision for fundamental changes to the state's transportation system — at least none Schneweis is willing to reveal — but Roads and Aeronautics officials have already identified a few opportunities and cost savings associated with the merger.

"I think you'll see that we were able to run both departments a little more efficiently as a result," Schneweis said.

Aeronautics employees have experience with automation and all-weather instrumentation used to guide airplanes, which could be useful as ground transportation becomes more sophisticated.

And the Roads Department has six paint-striping trucks.

"That's something that we would never be able to buy," said state Aeronautics Director Ronnie Mitchell, who will lead the aeronautics division of the new Transportation Department.

When Aeronautics crews help paint runway lanes at the state's general-aviation airfields, they do it by dragging a machine behind a pickup, Mitchell said. That takes a week or more, but a striping truck could finish it in three days.

The merger will also save on lodging expenses to help repair cracks in the concrete or asphalt on those runways. Instead of sending two employees halfway across the state, the crack-and-joint expert at Aeronautics can meet up with a local Roads employee close to the job site.

The Roads Department is one of Nebraska's biggest state agencies.

Aeronautics, with 19 employees, is among the smallest — so Mitchell doesn't foresee many brick-and-mortar modifications with the merger.

"We'll probably have to change the name on our door."

Merger of departments of roads and aeronautics moves forward

Cars and trucks could be navigating the South Beltway within the next decade if current planning and funding efforts move forward as expected.

DILLER — Officials are investigating the cause of a wind turbine tower's collapse in the Steele Flats Wind Farm in southeastern Nebraska.

City tries to minimize the pain of street construction on drivers

Traveling in north Lincoln will get a little more complicated as the city begins work at 33rd and Holdrege streets next week.

Over the past decade, entrepreneurial space companies in Southern California have set their sights on such goals as launching small satellites…

Access to westbound Interstate 80 will be shutdown this week as work on 27th Street moves into the next phase of construction.

Nebraska 'vanpooling' program offers new way to get to work

There's a new incentive for Nebraska's thousands of workday commuters to carpool with their colleagues.

Nebraska Department of Roads maintenance worker Joshua Craig motions a car past at a project on Nebraska 79 north of Valparaiso last week. When the state Roads and Aeronautics departments merge to form the new Nebraska Department of Transportation next month, the agency doesn't plan to rush out and change all the signs, vehicle logos or safety vests to immediately reflect the name change.

The Nebraska Department of Roads has 3,000 vehicles with its logos scattered across the state.