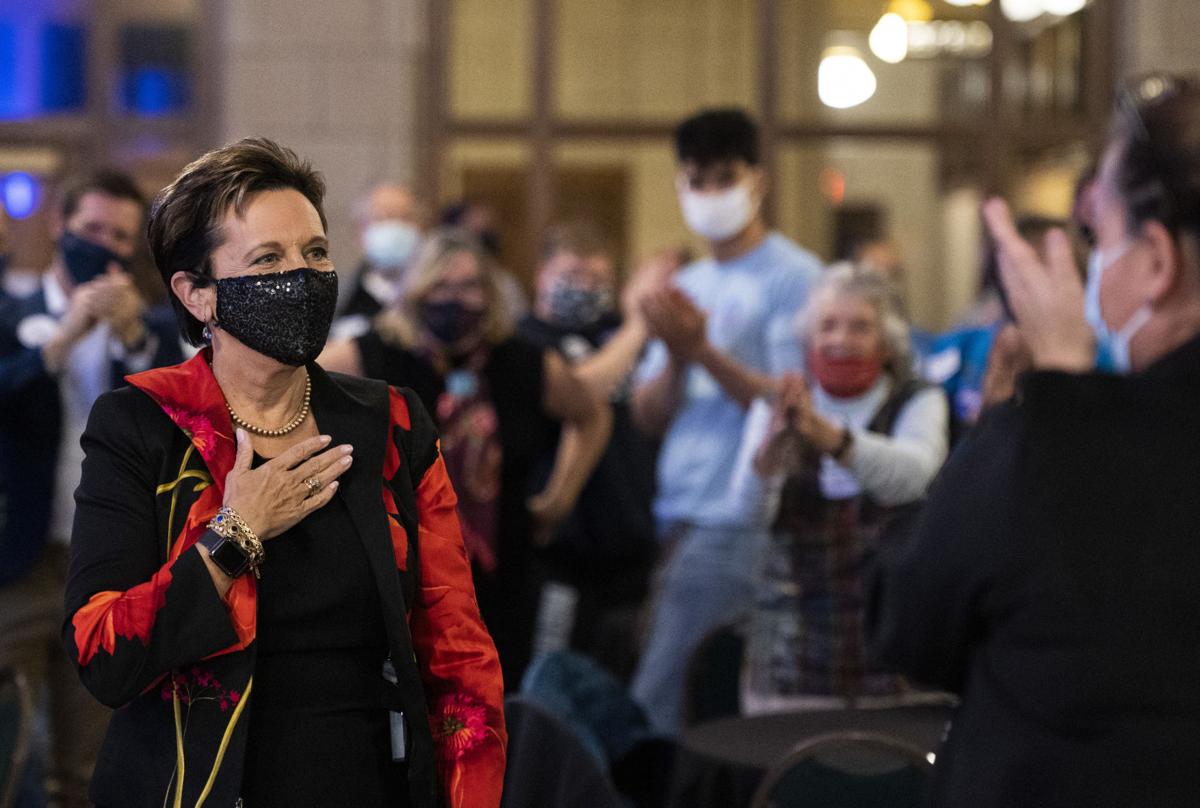 Supporters cheer for Patty Pansing Brooks (left) before she announces her run for the 2022 Democratic nomination for the 1st District House seat Monday at Lincoln Station. 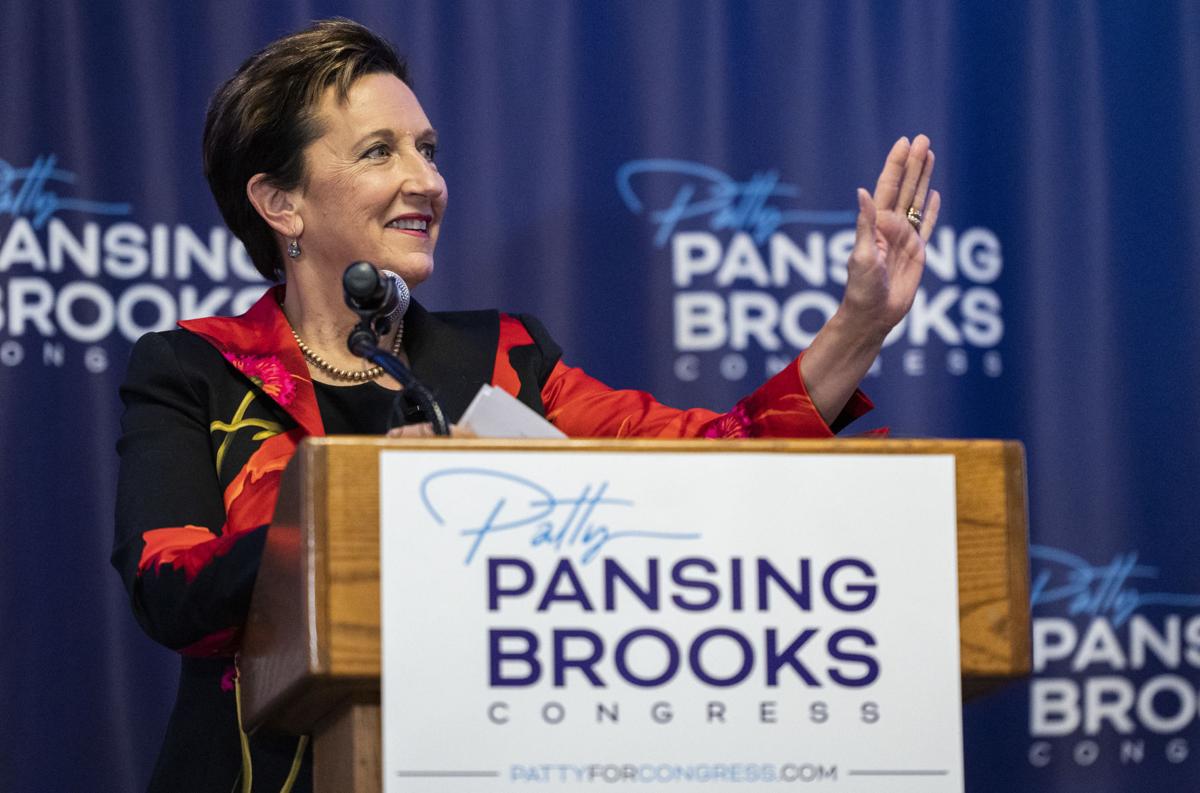 Patty Pansing Brooks waves to the crowd after announcing she will run for the 2022 Democratic nomination for the 1st District House seat on Monday at Lincoln Station.

Pansing Brooks, who will complete her term-limited eight years as a member of the nonpartisan Legislature at the end of next year, jump-started her campaign with news media contacts in Columbus, Norfolk and Fremont before her scheduled early evening kickoff event in the Great Hall at Lincoln Station.

That choice of Lincoln's train station was a purposeful decision to shine a spotlight on the importance of infrastructure improvement in Nebraska and on Fortenberry's vote against the $1.2 trillion plan recently approved by Congress, she said.

"I definitely would have voted for that bill," Pansing Brooks said during an interview in advance of her formal announcement.

"It provides enormous and much-needed benefits for Nebraska — roads, bridges, rural broadband, improvements in public transportation," she said. "I think he (Fortenberry) was off-track."

Feds have more than 11,600 pages of documents, 50 recordings in Rep. Fortenberry case

"The 1st District needs stronger representation," she said, a House member who will "speak out ... and make Washington more responsive to our district."

Pansing Brooks said she would like to "bring our nonpartisanship to Congress (in) a consensus-building manner that hopes to work across the (partisan) aisle."

If elected to the House, she said, she would also like to "work on workforce development" as a top priority, recognizing that is a major challenge for Nebraska now.

"We want to make sure all people know they are welcome here," she said. "That is the Nebraska way."

Pansing Brooks, who is an attorney, said she does not plan to focus on Fortenberry's indictment on federal charges that he lied to the FBI and concealed information about illegal campaign contributions that he accepted from foreign sources in 2016.

Fortenberry has denied those allegations.

"I will let the courts make their determination," Pansing Brooks said. "I will talk about his record."

Fortenberry pleaded not guilty to those charges, and his trial is tentatively slated for mid-February in Los Angeles pending court rulings on motions to dismiss the case.

The Lincoln congressman, who was first elected in 2004, is the dean of Nebraska's congressional delegation and a former Lincoln City Council member.

As a candidate for Congress, she said, she will not accept campaign donations from corporate political action committees (PACs).

In the Legislature, Pansing Brooks has focused on civil liberties and equal human rights, supporting "equality before the law."

In her announcement, she pointed to protection of victims of human trafficking and legislation to address the state's worker shortage, reform the juvenile justice system and "protect marginalized communities, including Native Americans and LGBTQ+ Nebraskans.

"I believe the attributes that have made me an effective state senator are the same attributes we need in Washington, more than ever," Pansing Brooks said in a statement accompanying her announcement.

"Strong leaders collaborate. Strong leaders seek out those they sometimes disagree with to address the issues about which people care. I want to make this happen in Washington."

Sen. John McCollister of Omaha, a Republican colleague in the Legislature, said in a video announcing Pansing Brooks' candidacy: "She's able to bridge the gaps like nobody I know. And so if it can be done, Patty Pansing Brooks will make it happen."

Responding to her announcement, Fortenberry campaign spokesman Chad Kolton said "the contrast will be very clear.

"Jeff Fortenberry has faithfully and effectively served Nebraska and America in Congress and will ask the voters to reelect him in 2022 to continue that work."

Pansing Brooks is the second Lincoln state senator in a row to challenge Fortenberry.

In 2020, Fortenberry turned back a strong Democratic challenge from former Sen. Kate Bolz of Lincoln, ultimately winning reelection by a comfortable margin while narrowly losing Lincoln.

Biden warns Putin on any aggression toward Ukraine

Biden warns Putin on any aggression toward Ukraine

"The perfect storm is here," T. Hank Robinson, vice president of institutional effectiveness at Metropolitan Community College in Omaha, told participants at a Nebraska Chamber of Commerce and Industry seminar in Lincoln.

The 2021 Nebraska Rural Poll and a new accompanying Nebraska Metro Poll show evidence that partisan critics have succeeded in undermining a critical component of the foundation of our democratic republic, Don Walton writes.

Don Walton: Here comes a one-time opportunity to invest in the state

A treasure of federal pandemic recovery funding is available for assignment in the state next year and an abundance of state revenue is arriving with more to come. Decision time ahead, Don Walton writes.

On Oct. 11, Nebraska will officially observe Indigenous Peoples Day for the first time, and the Nebraska Commission on Indian Affairs has several events planned to mark the occasion.

Another COVID-19 death reported in Lincoln

The woman in her 50s was hospitalized and unvaccinated, according to the health department.

Nebraska will benefit from an additional $2.5 billion in federal funding to maintain and repair its highways. About $225 million is allocated for bridge construction and repair.

Sen. Anna Wishart texted a message that the adventure has been "an incredible experience. … One of the most beautiful places I've ever been to … people and mountain."

The 1st District congressman warned that "Americans are about to have a new form of governance concentrated in DC." Rep. Adrian Smith criticized the package as making things worse.

Democrats used to be able to compete successfully statewide before Fox News showed up on the TV screen in virtually every coffee shop and bar west of Lincoln, Don Walton writes.

A spokesman for U.S. Rep. Jeff Fortenberry blasted federal prosecutors, saying they hadn't shared "the whole truth" about why he had not returned illegal campaign contributions.

Roads and highways form the largest slice of the massive federal infrastructure program funding that will be headed to Nebraska, but how the state's $2.5 billion allocation will be targeted is yet to be determined.

Feds blast back at Rep. Fortenberry's claim that he was 'set up'

Don Walton: A year of opportunity for Nebraska and the Legislature

It will be a year of opportunity for the Nebraska Legislature; and the state. Federal infrastructure and pandemic recovery funding provides an additional shot in the arm, opening the door to thinking big.

Jazari Kual, who became a familiar figure online when he livestreamed last year's protests in Lincoln and Omaha after George Floyd's murder, says he would like to turn a spotlight on the needs of "communities left behind."

"It has been an honor to serve Nebraskans as attorney general for the last seven years," he said in a two-sentence statement.

The 1st District congressman has written a letter protesting the cancellation of Delta flights from Lincoln to Minneapolis after the airline had received federal COVID-related assistance to help usher it through the pandemic.

"It's been a long, tough road to this miraculous moment," the Republican congressman from Lincoln said.

Can Rep. Jeff Fortenberry survive indictment for allegedly lying to the FBI?

When federal prosecutors announced indictments against the Nebraska congressman, GOP operatives privately began discussing possible successors. But none have emerged.

Supporters cheer for Patty Pansing Brooks (left) before she announces her run for the 2022 Democratic nomination for the 1st District House seat Monday at Lincoln Station.

Patty Pansing Brooks waves to the crowd after announcing she will run for the 2022 Democratic nomination for the 1st District House seat on Monday at Lincoln Station.