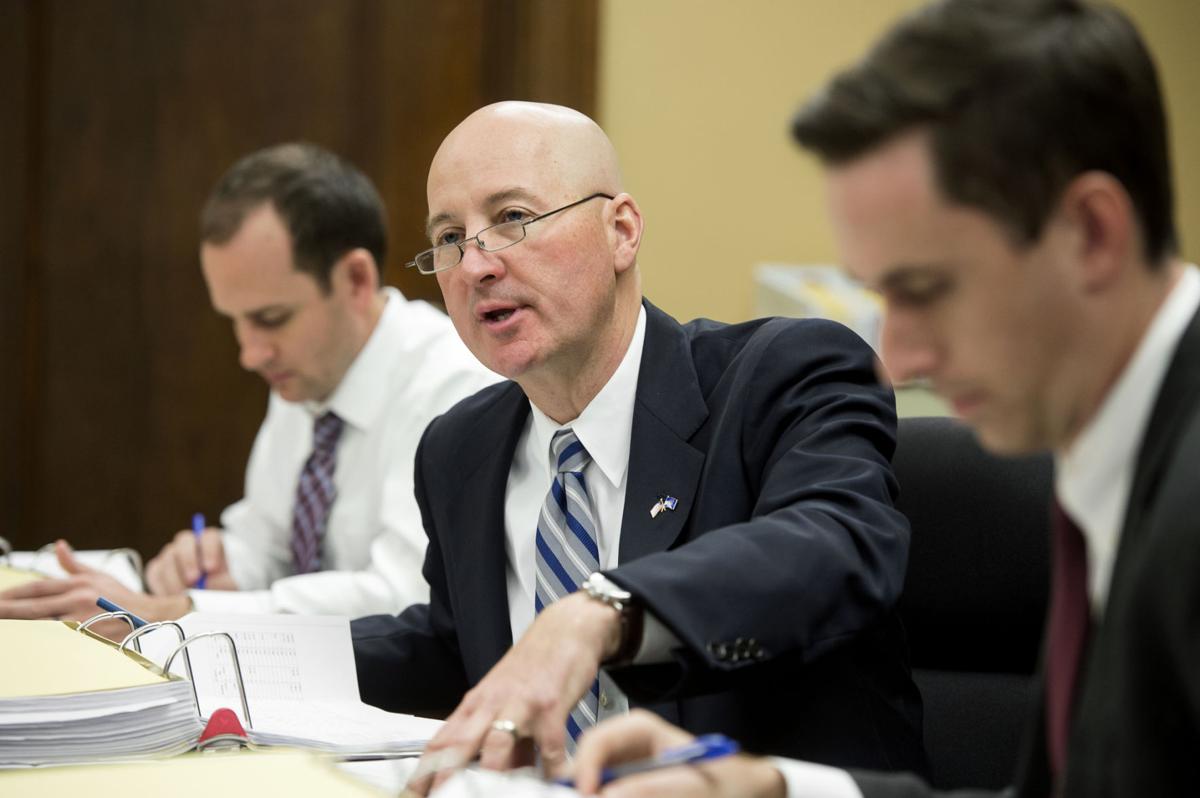 Gov. Pete Ricketts discusses the 2017-19 state budget he will propose to the Legislature with staff. He said the budget plan will be flat with few opportunities for growth. The exception is the Department of Correctional Services. 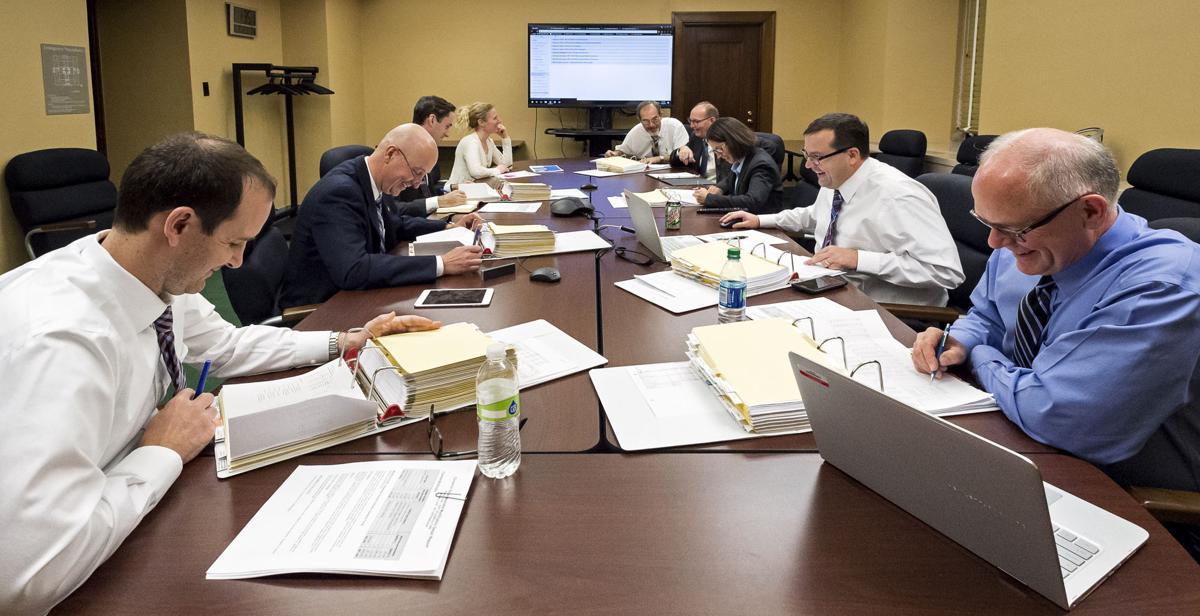 Gov. Pete Ricketts (second from left) discusses the budget with colleagues during a meeting on Wednesday at the Capitol.

In the isolation of a first-floor room in the state Capitol, a steady march to the bottom line is quietly unfolding.

Eight men and women are seated around a big conference table under fluorescent lights in this stark cave with its window blinds drawn.

Decisions are being made with collaborative conversation, and interaction is spinning around the room.

Gov. Pete Ricketts is one of the people at the table, and he is building what clearly emerges during the next two hours as an austere 2017-19 state budget proposal while also driving spending cuts during the remainder of the current fiscal biennium.

All of that is in response to the siren alarm of sharp reductions in anticipated state revenue as Nebraska's ag economy continues to struggle with low commodity prices.

Matt Miltenberger, his chief of staff, sits to his right. Across the table is Gerry Oligmueller, his state budget administrator.

A big computer screen is used occasionally to drill down on detail.

The language is "budget constraints," and exchanges between budget staff members and state agency leaders are informal, with moments of good-natured-yet-firm challenge and an occasional burst of laughter from the governor.

Ideas and alternatives fly through the air and land on the table.

"My inclination is," Ricketts says at one point, and another decision is sealed.

Two hours later, two agencies have their marching orders, which they helped devise.

Austere is not a word Ricketts embraces during a sit-down in the governor's office two days later. He prefers flat.

"This will be a flat budget," he said. "There are not opportunities to grow."

"We will live within the revenue forecast," Ricketts said. And that means cutting the current state budget that ends next June 30 while constructing a lean 2017-2019 budget proposal.

The Department of Correctional Services will be an exception, the governor said. Its budget will grow as the state addresses long-neglected needs.

Tax increases were not considered as an option to address the declining revenue estimate, Ricketts said. Efforts to continue to reduce taxes will remain on the table.

And budget reductions will have the impact of continuing to reduce government, he said.

"We're looking for ways to run our operations more effectively, and we're trying to shrink the size of government," the governor said.

"We definitely are checking the growth of government."

Ricketts noted that growth in the state budget during his first two years in office dropped from 6.5 percent to 3.6 percent. His own 2015-17 budget proposal to the Legislature had recommended 3 percent growth, he noted.

"It will be flat next biennium," he said.

Ricketts acknowledged the University of Nebraska, with its heavy reliance on the state tax-supported general fund, will be particularly impacted.

"I have alerted President (Hank) Bounds and I know he's looking at this. The university is going to have to make cuts," the governor said.

"I appreciate that he wants to be a partner in growing Nebraska by building the University of Nebraska. But the university has got to make tough decisions."

His own budget approach, the governor said, is to "have state agencies (under his control) be much more of a part of these conversations" about spending reductions.

The university is not under the governor's control; it is governed by the Board of Regents.

"I can just say these are the financial realities," Ricketts said.

Senators wary of relying too much on Nebraska's cash reserve

Nebraska lawmakers will face substantial budget challenges in next year's legislative session, but some are wary of draining too much from a r…

Although Nebraska Democrats lost their only congressional seat in this month's election, their gains in the nonpartisan Legislature have built…

Stothert vs. Mello: The next big political thing

OMAHA -- Next spring's contest for mayor of Omaha will feature two high-profile candidates, each of whom is viewed as a potential future gover…

Here's the drill: Republicans will swiftly repeal "Obamacare" as promised, but it won't really be eliminated and replaced for two or three years.

Gov. Pete Ricketts discusses the 2017-19 state budget he will propose to the Legislature with staff. He said the budget plan will be flat with few opportunities for growth. The exception is the Department of Correctional Services.

Gov. Pete Ricketts (second from left) discusses the budget with colleagues during a meeting on Wednesday at the Capitol.