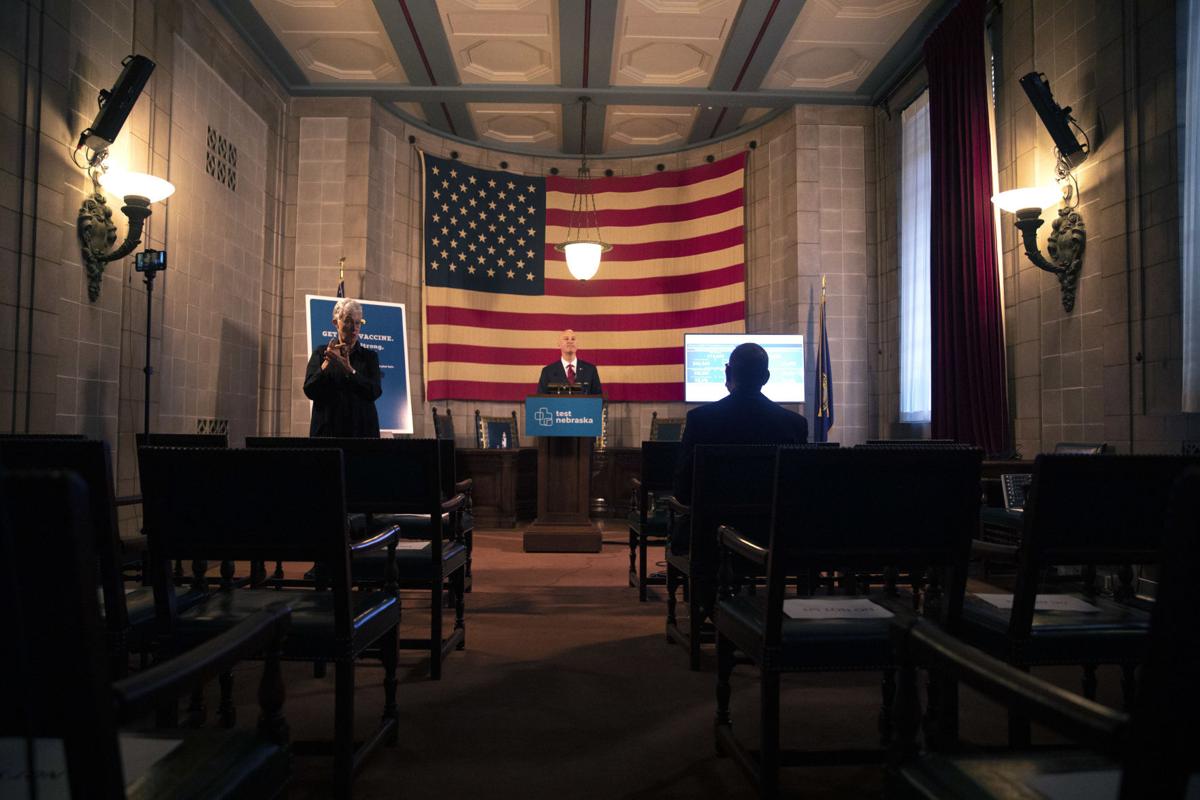 Nebraska Gov. Pete Ricketts gives an update to the public during a weekly COVID-19 news conference at the Capitol on Feb. 26. 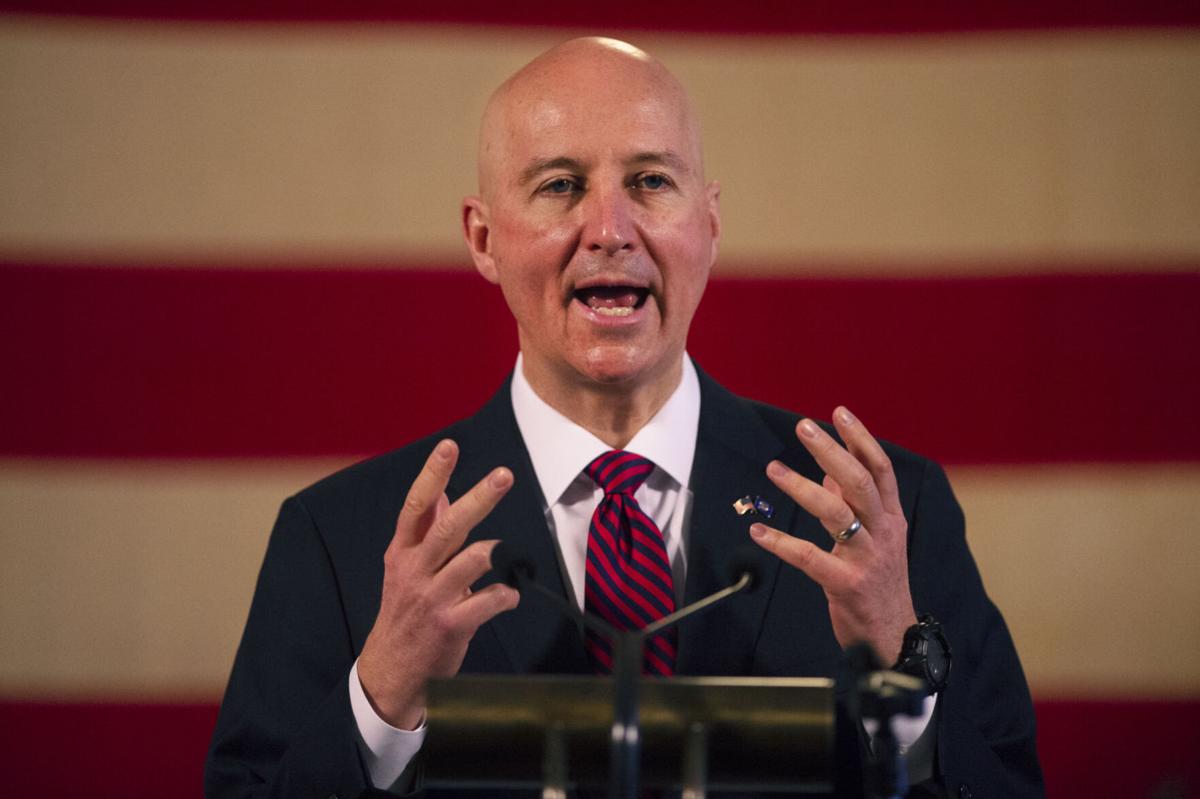 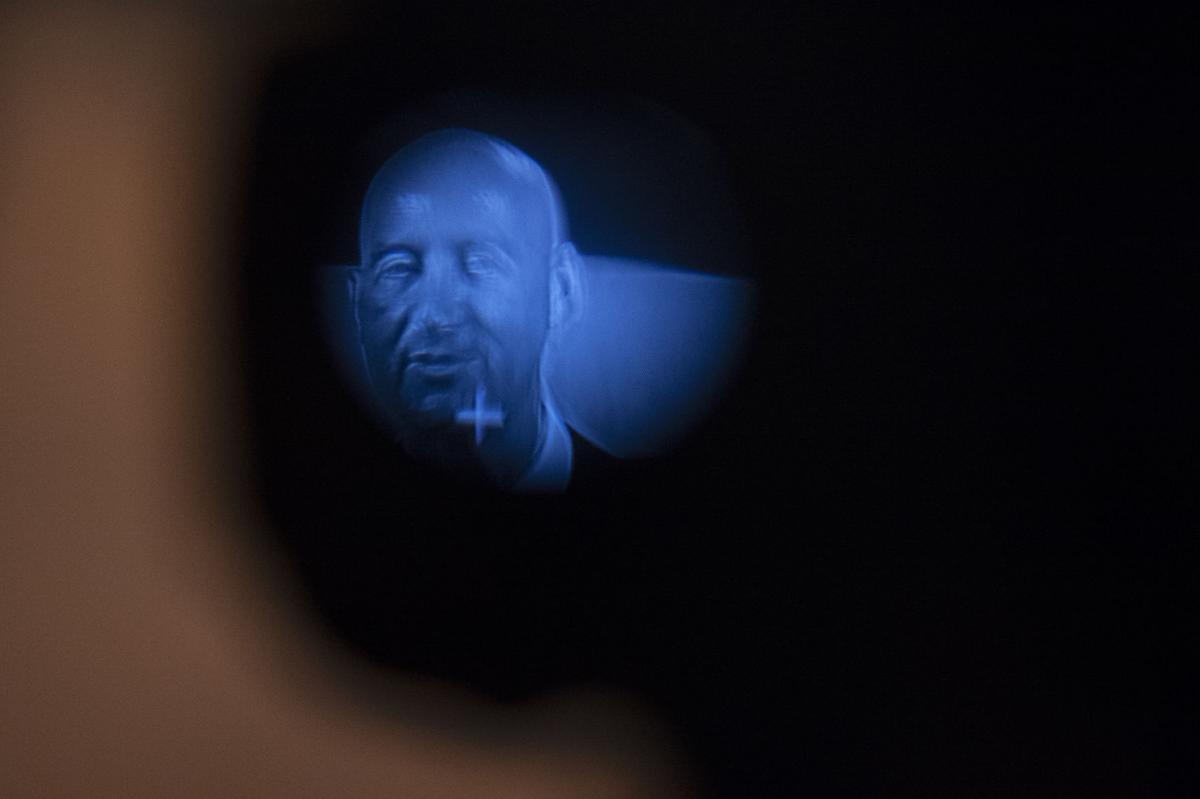 Nebraska Gov. Pete Ricketts, seen through a video camera eyepiece, gives an update to the public during a weekly COVID-19 press conference at the Nebraska State Capitol on Feb. 26.

One year after COVID-19 made its first appearance in the state and dramatically changed the lives of all Nebraskans, including Gov. Pete Ricketts, he is optimistic that life will look a lot more like normal this autumn.

Students back in their school classrooms.

Big crowds at the big stadium for Husker football, although there may be "some modifications" and some older and more vulnerable Nebraskans may choose to be cautious and watch games on TV at home, at least for a while.

At last, hopefully, an end to the isolation, and occasional waves of fear or doubt or danger, that disrupted so many lives as the dark intruder swept across the country.

But that upbeat look at the future that may be unfolding a few months from now also relies on continued diligence in terms of personal behavior, Ricketts said, teamed with the steady flow of vaccine into arms across the state.

Wear a face mask when appropriate, try to maintain 6 feet of personal distancing, avoid crowded indoor spaces, wash your hands frequently, get tested, quarantine if exposed —  that familiar list that Nebraskans have heard for a year still remains on the table.

The virus has ended the lives of more than 2,200 Nebraskans as it moved relentlessly across the state, centering most lethally at the beginning in assisted-living facilities where aging Nebraskans were particularly vulnerable.

Within a few months, Nebraskans who choose to get vaccinated — and that is the wise choice, the governor suggests — will have received a dose or two of protection from the virus, Ricketts said, clearing the path for a welcome, but careful, return to normalcy after a year of caution and concern.

President Joe Biden has said there will be sufficient vaccine available for every adult American by the end of May.

"By fall, everyone who wants a vaccine will have had the opportunity," Ricketts said.

What lies ahead for Nebraskans, he said, is "a more normal life."

Nebraska's first confirmed case of COVID-19 occurred in Omaha on March 6, one year ago, when a seriously ill woman from Douglas County was hospitalized following her return from a trip to England.

And that began to change everything.

For Ricketts, it quickly began to dominate his governorship, as he immediately turned to the experts at the University of Nebraska Medical Center, an acknowledged leader in the field of highly infectious diseases, for counseling and advice.

A year later, he continues to touch base with the Medical Center a couple of times a week, he says, "but other sources have also developed" as he has attempted to include and balance all the factors in play.

"So far," the Republican governor said, he has been "very pleased" with the efforts of Biden and his administration to aggressively attack the virus by dramatically ramping up the supply of vaccine.

But Ricketts does have a suggestion: "I would appreciate it if the vice president or president would participate once in awhile" in the regular White House briefings for governors updating the battle against COVID-19.

That adds clout and public attention, he said.

Even now, the governor says, the virus occupies "almost all of my time, as it did most of the last year."

Ricketts continues to hold regular news briefings at the Capitol, keeping a spotlight on the battle against the virus, usually scheduled two or three times a week.

As in most states, it's the governor who clearly has emerged as the face of the battle against COVID-19.

During a socially distanced interview in the ornate governor's office earlier in the week, Ricketts immediately gave credit to "my great team" for the work that his staff members and other state employees have done in responding to the challenge, learning, growing and adapting along the way.

"So many people stepped up," the governor said.

Despite devoting most of his time to the virus, he still has been able to perform his other duties as governor, he said, including helping deliver "the most significant property tax relief yet."

"We were still able to make progress despite the pandemic," Ricketts said.

An exception is "no trade missions," he said, although that could change this coming autumn.

Meanwhile, the governor said, he will be traveling throughout the state more often once again.

Yes, there has been prayer, Ricketts said, usually a couple of times a day.

"When it comes to faith, what we missed most was not being able to attend services at St. Margaret Mary's Church" during the worst days of the pandemic, the governor said.

Attending Sunday services at that Catholic parish in central Omaha is "a great joy for me," he said.

And what has he learned about himself during this long year of challenge, personal stress and strain?

"Quite frankly," he said, "there has not been a whole lot of time for introspection."

Ricketts credits "Nebraska grit and generosity" for helping weather what appears to have been the worst of the storm.

There has been a visible sense of community as "everyone worked together" to confront the challenge, he said.

The year in numbers

PHOTOS: STATE OF THE STATE ADDRESS

Photos: State of the State address

Don Walton: Return of congressional earmarks would be good for Nebraska

Appropriations earmarks helped fund worthy projects throughout the state before they were seized as a partisan political issue a decade ago.

As other states close prisons, Nebraska may build a big one

Officials across the nation are closing prisons as crime rates drop and views about drug use change, but not in Nebraska, where the governor is pushing for a new $230 million prison to relieve overcrowding and house a steadily rising inmate population.

"We need to start all over," the Legislature's Revenue Committee chairwoman said. "The committee needs to build a package."

A state government demonstration project shows no negative impact on vehicle performance after a year's use of an E-30 blend.

Adventure Golf wants to add alcohol to appeal to traditional golfers, but the owners plan to restrict alcohol consumption to one of its two courses to maintain a family-friendly environment.

Last week, Lancaster County recorded no new deaths, and the local rate of positive tests fell below 20% for the second time in the last six weeks, according to the Lincoln-Lancaster County Health Department.

Nebraska Tourism rolls out passport program with 70 stops for 2021

From Q's Dairy Sweet in Crawford to the Blackbird Hill Studio in Macy, visitors can add a stamp to their passport for each stop they visit, and stamps can be redeemed for prizes.

Also Tuesday, the Health Department announced it would extend the current directed health measure restrictions, which includes a mask mandate, by one month to April 12.

There have been 552,000 vaccinations in the state so far, the governor said, noting that one new national survey places Nebraska first among the states in the percentage of vaccinations received by people 65 and older.

Sen. Curt Friesen of Henderson warns that state spending or reduction of revenue could endanger a legislative commitment to continue reducing property taxes.

Legislation to reduce the state's top corporate income tax rate was also sent to the floor of the Legislature by the Revenue Committee, which also discussed the idea of advancing a consumption tax proposal.

The driving force behind recent efforts to increase highway construction funding is a desire to complete Nebraska's four-lane expressway system.

Ricketts steps up attack on legalizing marijuana in Nebraska

Marijuana is especially dangerous to young people, Gov. Pete Ricketts says, as an emerging battle in Nebraska heats up with efforts to legalize both medical and recreational marijuana ramp up in the Legislature.

"I look forward to continuing my focus on issues of critical importance for Nebraska" in the House of Representatives, the 2nd District congressman said.

Sen. Carol Blood of Bellevue is seeking an attorney general's opinion on the issue.

The AstraZeneca vaccine, which is likely to become available in coming weeks, has been found to be 79% effective in preventing symptomatic illness, said Dr. Gary Anthone, the state's chief medical officer.

Sen. Anna Wishart, who's led the battle in the Nebraska Legislature for legalization of medical marijuana, counts Republican senators from small towns as her closest mentors in the body where she's sought common ground on more than cannabis.

The governor's objections, expressed in his weekly column, appeared to set the stage for potential vetoes.

Nebraska Gov. Pete Ricketts gives an update to the public during a weekly COVID-19 news conference at the Capitol on Feb. 26.

Nebraska Gov. Pete Ricketts, seen through a video camera eyepiece, gives an update to the public during a weekly COVID-19 press conference at the Nebraska State Capitol on Feb. 26.