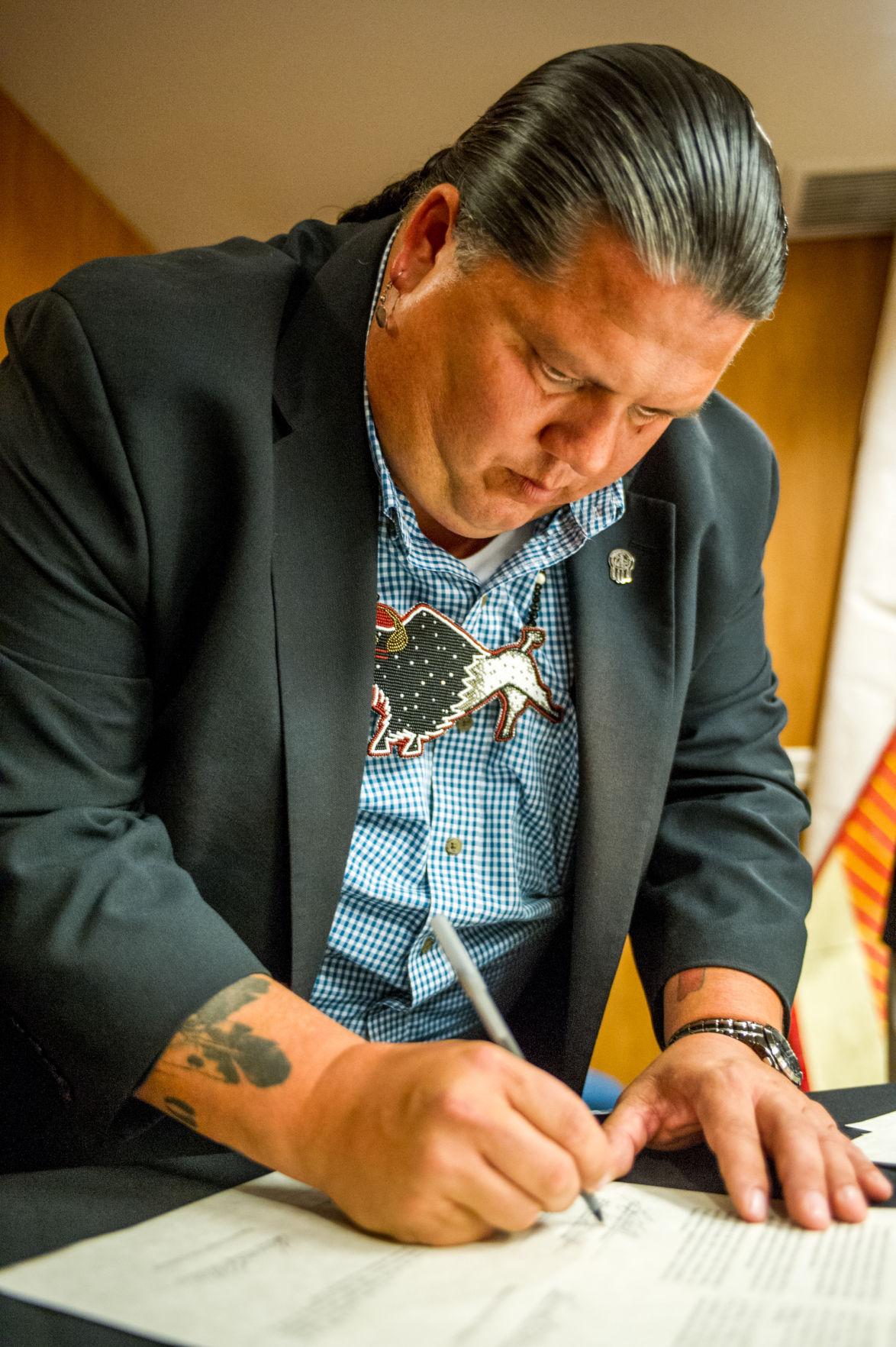 Larry Wright Jr., chairman of the Ponca Tribe, signs a treaty opposing the Keystone XL pipeline on Tuesday at the Graduate Hotel. 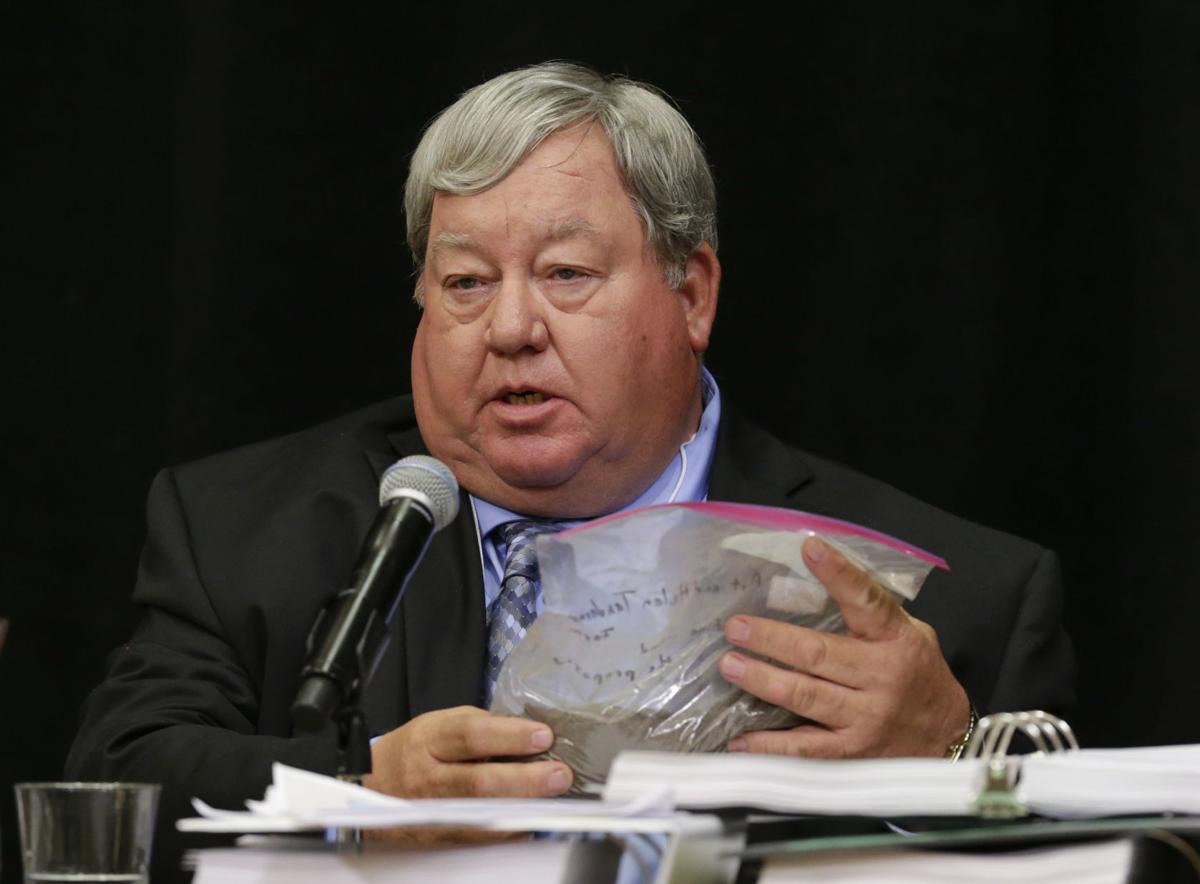 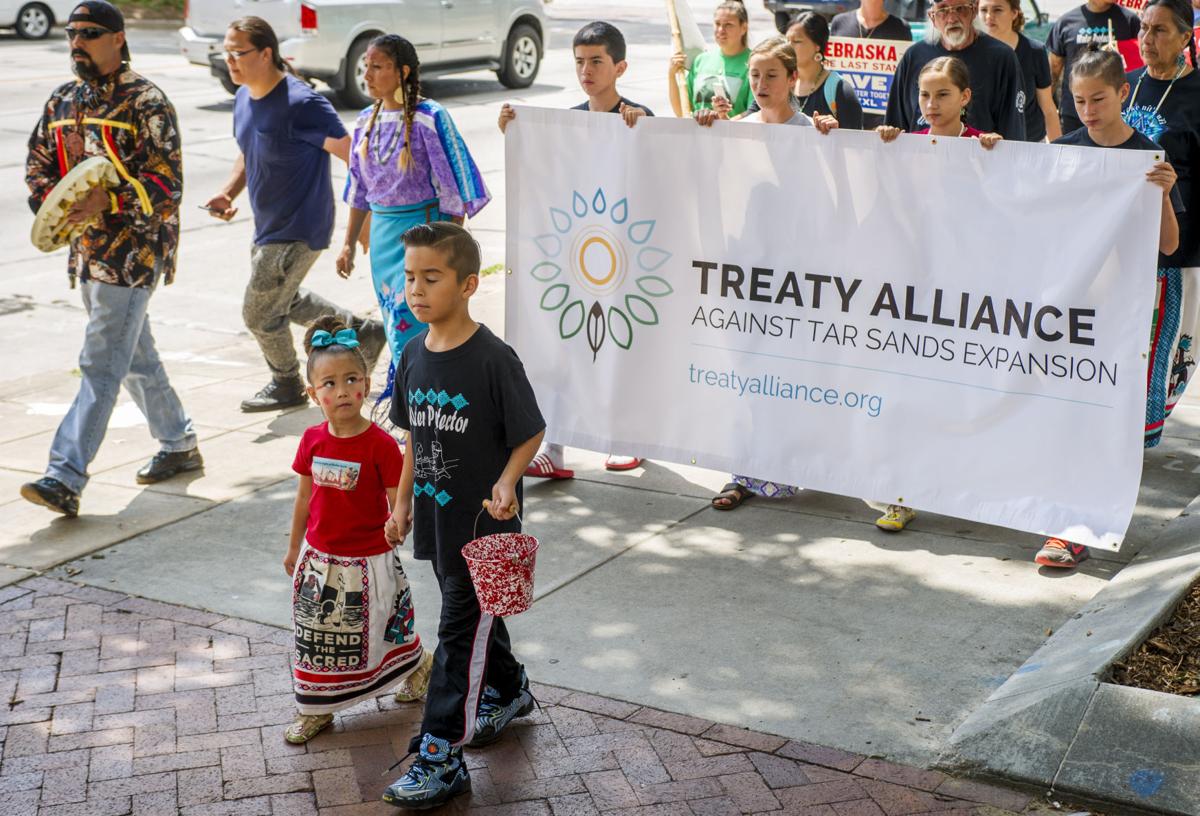 Lola, 3, and her brother Preston Williams, 7, lead a prayer walk to the Cornhusker Marriott Hotel on Tuesday on O Street. They were part of a demonstration by the Intertribal Coalition of Nebraska to oppose construction of the Keystone XL pipeline.

Nothing binds the Keystone XL pipeline to its proposed route through Nebraska, TransCanada officials acknowledged Tuesday under sometimes-furious questioning by attorneys opposing the pipeline.

A different route -- one parallel to the existing Keystone pipeline, which was built in 2010 -- would cut a shorter path through the state, cross fewer rivers, make one less pass over the Ponca Trail of Tears and reduce the potential impact on wildlife such as the endangered whooping crane.

"Wouldn't it be an advantage to TransCanada to be able to put in a pipeline across a route over which it had no public opposition, and for which the public was either in agreement or indifferent?" attorney Dave Domina of Omaha asked Meera Kothari, the project's lead engineer, during the second day of a weeklong hearing at the Cornhusker Marriott Hotel.

"I suppose so," Kothari replied.

But it doesn't necessarily make sense from an engineering or economic standpoint to place all major pipelines along the same route through a state, she said.

"Each project is specific based on its origin and destination, and we look to try to find the shortest path from the origin to the destination."

As proposed, the 36-inch, $8 billion Keystone XL would begin in Hardisty, Alberta, and cut 1,179 miles to Steele City, Nebraska, where it would connect with the existing Keystone pipeline, carrying Canadian heavy crude to the U.S. Gulf Coast.

While using the original Keystone route would shave 65 miles off the pipeline in Nebraska, it would add to its overall U.S. mileage. Federal reviews have found TransCanada's preferred route is the best of the two, said Matt John, a TransCanada spokesman.

The five-member Nebraska Public Service Commission is trying to determine whether the proposed route is in the public interest. This week's hearing is part of that process.

Commissioners will probably vote on the application sometime in November.

Day 2 of the hearing focused mainly on soil and water.

The pipeline would cross five rivers and the Ogallala Aquifer, and run within a mile of 2,649 known water wells between its entry point in north-central Nebraska and its Steele City terminus.

Landowners who testified later in the day said they worry about the Keystone XL's potential impacts on those water sources, as well as the diverse, sometimes highly permeable soils that cover their fields.

Hoisting a bag of dirt, Antelope County farmer Art Tanderup said he sees no difference between his ground and the nearby area officially recognized as the Nebraska Sandhills, which the Keystone XL is supposed to avoid.

"Regardless of what map you use, if I take my sand and I walk across the Elkhorn River, and I hold that sand in the other hand, it's the same sand."

TransCanada says it plans to restore the land to its original condition once the trench is dug and the pipeline is laid 4 feet below the surface.

But Domina and Brian Jorde, attorneys for the landowners, questioned whether that's possible, and suggested farmers and ranchers along the route need better protections in case TransCanada doesn't keep its word.

"The sand blows like snow, and by the time they get the pipe in the ground, we don't know where our topsoil will be unless it is protected significantly," Tanderup said.

And Commissioner Mary Ridder, a rancher from Callaway, wondered aloud how TransCanada might find topsoil to fill in any settling along the route.

“That’s a challenge for farms and ranches, period," Ridder said.

Tanderup and four other landowners -- Susan Dunavan of York County, and Jeanne Crumly and Bonny Kilmurry of Holt County -- were the last people to testify Tuesday. More landowners will speak Wednesday.

Attorneys spent most of the day cross-examining witnesses called by TransCanada. Opponents became frustrated at times trying to sort through which of TransCanada's experts was allowed to speak on which subjects.

“Well, since you can’t answer any of my questions, I’m going to end my questioning," said a visibly frustrated Ken Winston, attorney for the Sierra Club and Bold Nebraska, during his own examination of Kothari, the engineer.

Other groups opposing the pipeline include the Yankton Sioux Tribe of South Dakota and the Ponca Tribe of Nebraska.

The Ponca and three other Nebraska tribes -- the Santee, Winnebago and Omaha -- inked a treaty opposing the pipeline Tuesday at the Graduate hotel, joining 150 other tribes who have opposed similar projects.

Keystone XL is headed for another dramatic showdown. Here's what to expect.

Much has changed in 22 months.

Bob Allpress figures just about every bird species that migrates through Nebraska flies past his ranch along the Keya Paha River.

BILLINGS, Mont. — Attorneys for the Trump administration said a federal judge has no authority to second-guess a presidential permit for the K…

Decision on Keystone XL pipeline to be announced Monday

The Nebraska Public Service Commission will announce its decision on the Keystone XL oil pipeline next week.

Larry Wright Jr., chairman of the Ponca Tribe, signs a treaty opposing the Keystone XL pipeline on Tuesday at the Graduate Hotel.

Lola, 3, and her brother Preston Williams, 7, lead a prayer walk to the Cornhusker Marriott Hotel on Tuesday on O Street. They were part of a demonstration by the Intertribal Coalition of Nebraska to oppose construction of the Keystone XL pipeline.