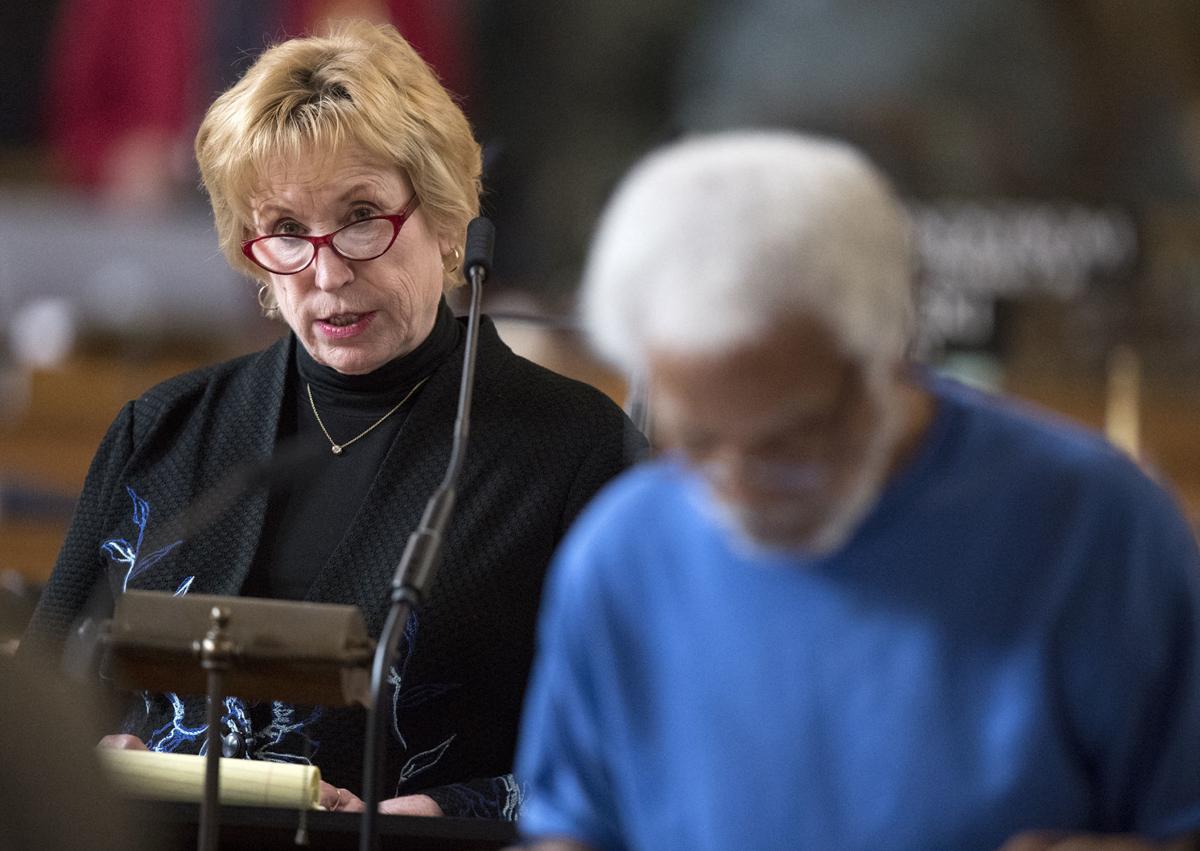 Sen. Lou Ann Linehan (left) speaks as Sen. Ernie Chambers works during debate in the 2019 legislative session. Demographics of the two Omaha senators' districts couldn't be more diverse, according to a Legislative Research Office report that looked at districts across the state.

A recent legislative report shows the tale of two cities where Omaha is concerned -- one black and one white -- according to state Sen. Ernie Chambers.

Recent personality profiles of Nebraska's 49 legislative districts show how the state's population is shifting and how the senators representing them must consider a diverse set of needs, in their districts and statewide.

No one knows that better than Omaha Sens. Lou Ann Linehan and Ernie Chambers.

Just 16 miles apart in Omaha, Linehan's western Douglas County District 39 has seen the highest growth in the past nine years since the last redistricting effort in the state. It added about 10,000 people, reaching 47,133, while Chambers' District 11 lost about 2,000.

The average district population is 38,651, and Chambers is 35,497, according to a collection of census statistics gathered by the Legislative Research Office and analysts Logan Seacrest and Tim Erickson.

But that's far from the only imbalances between the two.

"There's been a constant, steady, persistent political and economic process that renders Omaha a tale of the two cities ... the white and the black," Chambers said.

It's like the sediment is where we find ourselves, he said of his district.

"Everything that would be rejected or is not good is going to wind up where we are."

There's a greater disparity in income and discrimination in types of jobs available, he said. It shows in the five-year 2014-18 census data the legislative research office used to do the rankings.

Linehan's district, which includes Elkhorn, Waterloo and Valley, has the highest median household income, at a little over $102,000, way more than the state's median $58,337. And the percentage of families in poverty is the lowest, at 3.3%, with 2.8% of kids in poverty.

Chambers' district's median income is the lowest, at $26,864. And the percentage of families below the poverty line is nearly 36%.

Only 9% of District 39 households are headed by single parents. In Chambers' District 11, 40% are single-parent households.

Education is a huge factor in Linehan's district, she said. Her constituents care a lot about the schools their kids attend and their own higher education.

"(The Elkhorn schools') scores are amazing and they do a great job," she said.

Not everyone is living in $500,000 houses, Linehan said. But there's a lot of wealth, with two-professional families. About 98% are high school graduates and 55% are college graduates.

Linehan said her constituents take pride in being self sufficient.

"What they want from government is to stay out of the way," she said. "They are worried about high taxes, whether that's property taxes or income taxes."

Linehan is chairwoman of the Legislature's Revenue Committee and has spent most of her time in the past year working on solutions with the committee to the state's taxing dilemma.

Chambers is known for his work on behalf of low-income people and defending the downtrodden, not only in his district but in the state as a whole.

Chambers said he sees his district's situation as a well-planned, insidious and efficiently executed scheme to deprive a community of viability, security and hope. That results in a loss of energy and will to resist, he said, and people succumb to hopelessness, disillusionment, despair and become prey to opportunism and exploitation from others.

"That's what happens to black communities all over the country," he said.

Josie Gatti Schafer, director for the University of Nebraska at Omaha Center for Public Affairs Research, said housing explains a lot of the differences in the two districts, both where and what kind of housing is built and access to capital to invest in homes.

When people are grouped like that through policies and practices, she said, they are more financially insecure, which results in higher crime rates, and fewer youths finishing school, and then fewer job opportunities.

That creates a cycle of poverty. Less education and less money means a person is less likely to get a job outside their community.

The rankings in the legislative districts-at-a-glance publication show the top 10 districts with the highest median incomes are along the eastern edge of the state, in western Douglas and Sarpy counties, with southeast Lincoln's District 25, represented by Sen. Suzanne Geist, slipping in with the fifth highest median income at nearly $81,000. District 25 also has the highest investment income, $144 million, based on aggregate interest, dividends or net rental income, and high percentages of high school and college graduates.

Rankings for other Nebraska districts include:

* District 27 in western Lancaster County, represented by Sen. Anna Wishart, is the fourth largest with 41,438 residents. Almost all of the Lancaster County districts are in the upper half of the rankings, above the average.

* Lincoln districts are among the youngest, in terms of median age. Lancaster County's District 46 has the youngest median age at 23.6 years old. A full half of Sen. Adam Morfeld's 40,296 constituents, with the University of Nebraska-Lincoln included, are younger than 23.

* The district with the highest median age of 45 is Sen. Tim Gragert's, in northeast Nebraska's Knox County. East central Nebraska's District 41, Sen. Tom Briese's, has about 22% of its residents over 65 years old.

* Nebraska has nearly 7% of its residents born outside the United States. But some districts have a much higher rate, including Sen. Tony Vargas's District 7 in south Omaha with 26% immigrants among its residents, followed by McDonnell's adjacent District 5 at 19%.

* The highest percentage of people that speak a language other than English are also in those districts, with close to half of Vargas' constituents falling into that category, and about 35% of McDonnell's.

* Morfeld's District 46 has the highest percentage of people with science, technology, engineering and math degrees among its college graduates, at 37.5%.

Recent trial studying effectiveness and safety of medication abortion reversal procedure was stopped after five months because of safety concerns of participants.

Prisoners petition for assistance with conditions at Nebraska penitentiary

The plea for assistance came earlier this month in a letter from Nebraska State Penitentiary inmate David Gills.

Reporter Alex Berenson left the New York Times nine years ago after covering a variety of topics that ranged from health care to the war in Iraq.

Sandhillers' worry: 'What are the hills going to look like when they get done?'

ROSE -- The first thing you notice on Dave Hutchinson's Sandhills ranch on a July day are the dragonflies -- so many dragonflies.

A Seward County deputy has asked a Lincoln judge to reverse a decision by a state council that could put an end to his employment early next month.

As 49 senators head into a new session, they will bring Nebraska residents along with them in the policy they set and the public discussions they have along the way.

Census still needs to hire thousands of workers in Nebraska

If you're looking for a temporary job that pays fairly well, the U.S. Census Bureau is looking for you.

Sen. Lou Ann Linehan (left) speaks as Sen. Ernie Chambers works during debate in the 2019 legislative session. Demographics of the two Omaha senators' districts couldn't be more diverse, according to a Legislative Research Office report that looked at districts across the state.

A recent legislative report shows the tale of two cities where Omaha is concerned -- one black and one white -- according to state Sen. Ernie Chambers.