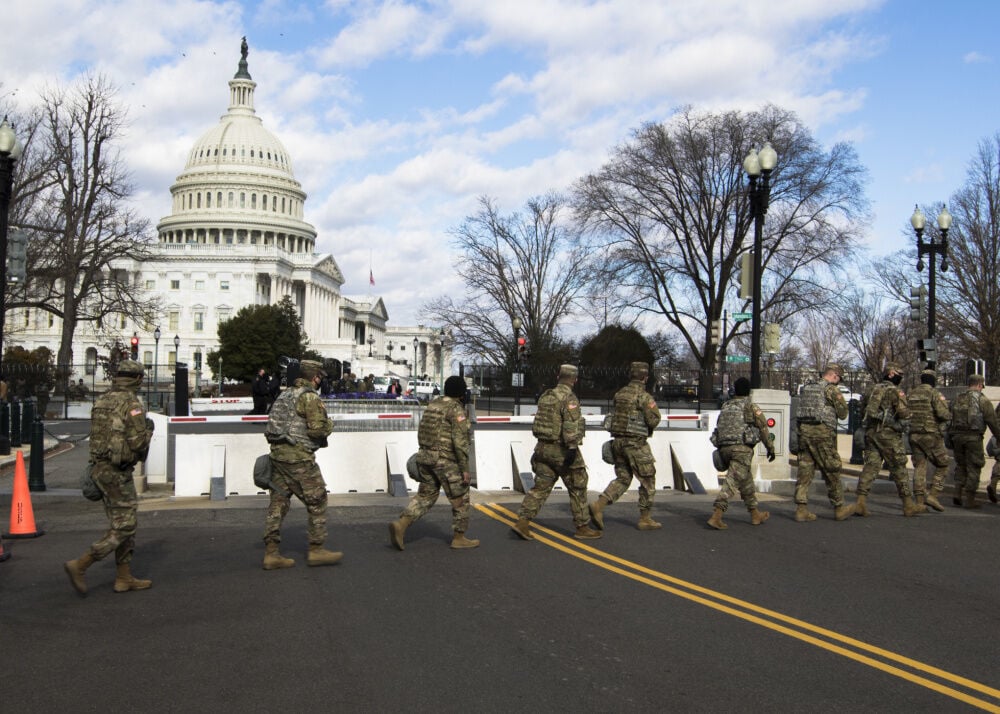 Nebraska National Guard Soldiers and Airmen move out around the U.S. Capitol building in Washington, D.C., on Jan. 19. At least 25,000 National Guard men and women have been authorized to conduct security, communication and logistical missions in support of federal and District authorities leading up and through the 59th Presidential Inauguration. 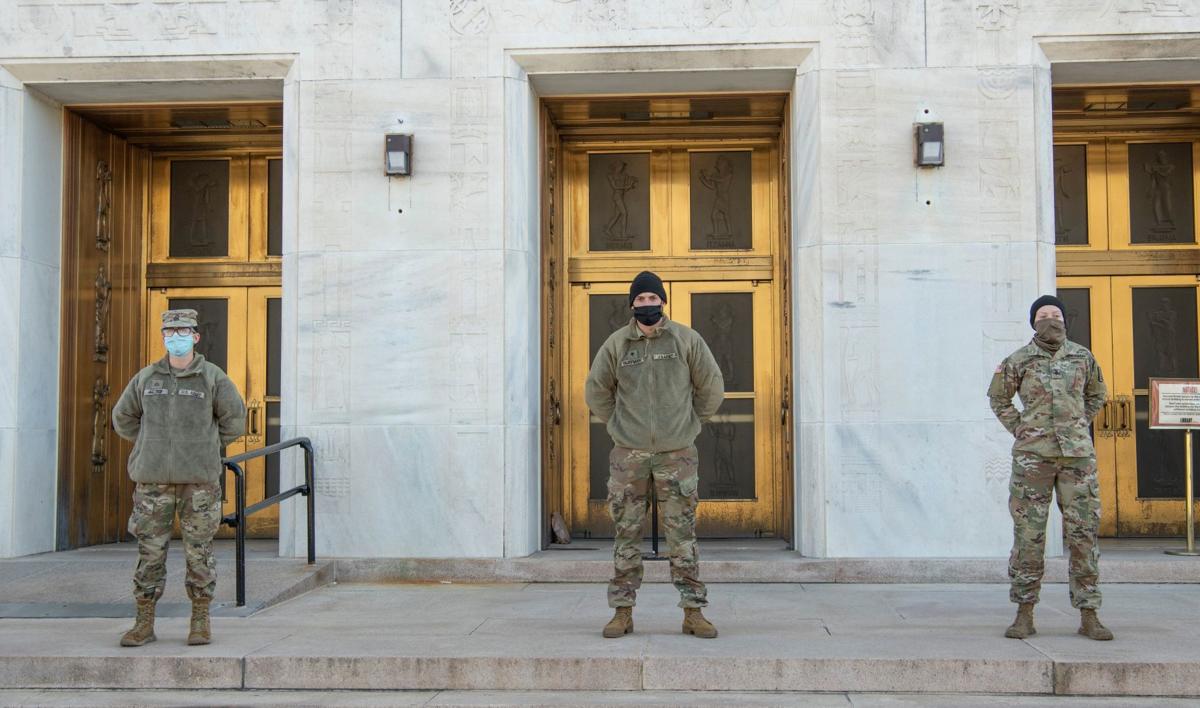 Nebraska National Guard members stand guard near the U.S. Capitol in January. Congress hasn't repaid the National Guard Bureau $521 million in costs incurred during the four-month deployment, so it is curtailing training for the last two months of the federal fiscal year, which ends Sept. 30.

National Guard members in Nebraska, Iowa and across the country may lose training and pay for the next two months because Congress has failed to repay the Guard for protecting Washington, D.C., in the months following the Jan. 6 attack on the U.S. Capitol.

The National Guard Bureau spent $521 million to keep about 25,000 troops in Washington, manning concrete fencing and checkpoints around the building and providing security during President Joe Biden’s inauguration. Most left within a few weeks, but some soldiers stayed until the end of May.

The bureau expected Congress would pony up funds to repay them. But the bill to cover the costs has gotten tied up with Washington’s partisan gamesmanship.

“Time is running out,” said Maj. Gen. Richard Neely, adjutant general of the Illinois National Guard, at a media briefing Friday. “The loss of these funds will have a major impact on our readiness, both for our federal missions and for state emergencies.”

The Nebraska National Guard is facing a shortfall of $3.4 million. A state marksmanship contest scheduled for August already has been scrubbed, said Maj. Gen. Daryl Bohac, the state’s adjutant general, and a workshop for commanders to plan next year’s training has been postponed.

“We simply couldn’t afford to do it,” he said.

The critical question now is whether to cancel weekend Guard drills in August, which typically take place the first or second week of the month. Some soldiers and airmen also have not yet completed two weeks of annual training. They could also lose two months of Guard pay.

In Nebraska, Bohac said, top priority is given to soldiers who need training to receive credit for a year of service toward retirement as well as members of units that are deploying soon. That includes a pair of units slated to join the border patrol mission in October.

“We’re preserving where we can,” Bohac said.

The National Guard has been exceptionally busy in the past two years. Guard units aided with food distribution and vaccination clinics during the COVID-19 pandemic, security during Black Lives Matter protests in various cities last summer, and support for U.S. Customs and Border Protection agents along the U.S-Mexico border.

That’s in addition to the aid provided after natural disasters such as the March 2019 floods that hit both Nebraska and Iowa.

Neely warned that Guard units across the country would suffer “multiple and cascading effects” if forced to cancel drills and annual training.

“It would be punishing the force that has worked extremely hard in the last year, the last two years,” he said.

The National Guard Bureau raided its operations and maintenance funds earlier in the year to cover the deployment, with a promise of reimbursement by Congress later in the year.

Repaying the National Guard Bureau has nearly universal support in Congress. But, as often happens, the reimbursement package has gotten wrapped up with other budget priorities.

In April the House passed a $1.9 billion measure that wrapped up the Guard reimbursement with provisions to beef up the Capitol Police, including the creation of a quick-reaction force.

Many served, some died: Nebraskans look back on the Afghanistan war

The Senate has not voted on a bill, but Senate Democrats are pitching a $3.7 billion bill that adds funding for the military’s coronavirus response and aid for resettlement of Afghan refugees with Guard reimbursement and Capitol Police funding.

A Senate Republican proposal priced at $633 million includes the Guard reimbursement with a few extras for the Capitol Police.

Last week, a group of House Republicans began building support for the National Guard Emergency Supplemental bill, a slimmer measure with only the Guard funding. Rep. Don Bacon of Nebraska has signed onto that. “Our Guard deserves to be fully trained, equipped and ready to answer the call,” he said in a statement.

Bohac said members of Congress may want to solve the problem, but there is so little time before Congress takes its traditional five-week August break.

“You’re talking days and hours, not weeks and months,” he said.

“This is really not typical,” Bohac added. “This is a one-off event that’s really causing a lot of disruption.”

US to require COVID-19 shots for foreign visitors

Nebraska National Guard Soldiers and Airmen move out around the U.S. Capitol building in Washington, D.C., on Jan. 19. At least 25,000 National Guard men and women have been authorized to conduct security, communication and logistical missions in support of federal and District authorities leading up and through the 59th Presidential Inauguration.

Nebraska National Guard members stand guard near the U.S. Capitol in January. Congress hasn't repaid the National Guard Bureau $521 million in costs incurred during the four-month deployment, so it is curtailing training for the last two months of the federal fiscal year, which ends Sept. 30.