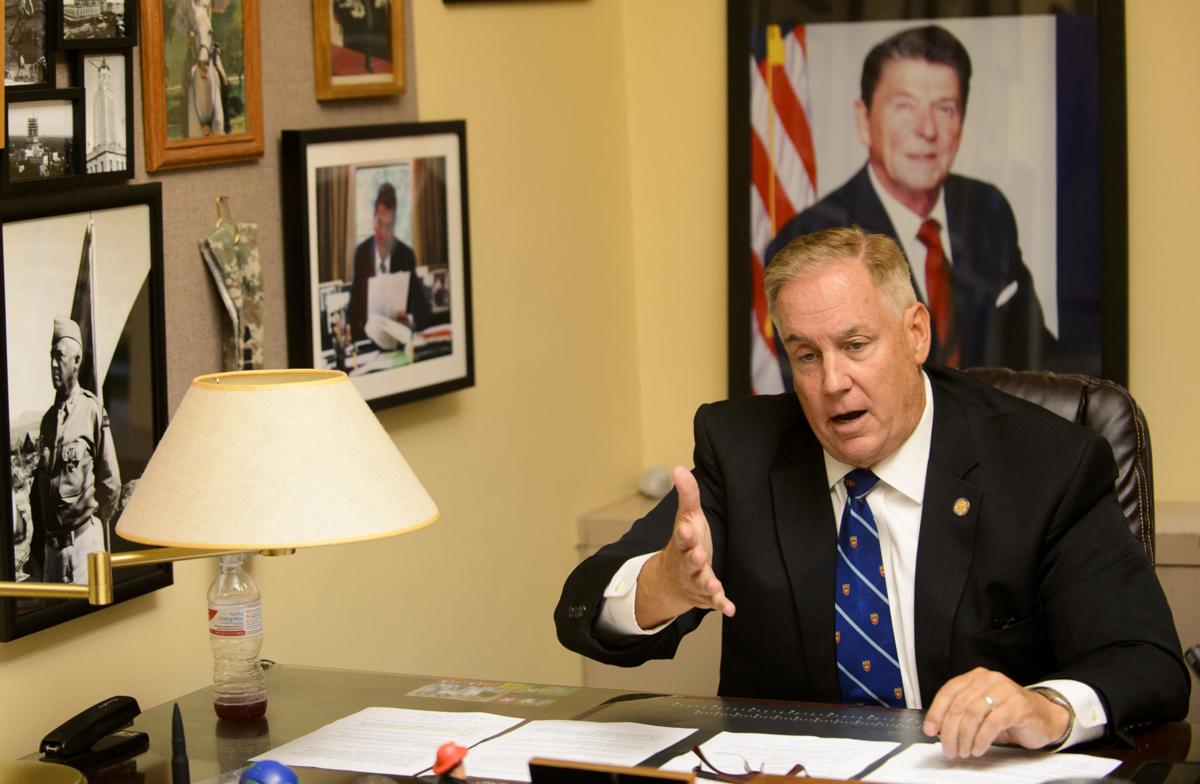 State Sen. Bill Kintner talks with the media on Aug. 5 after the Nebraska Accountability and Disclosure Commission fined him $1,000 for misuse of government property after an investigation into his online activity. 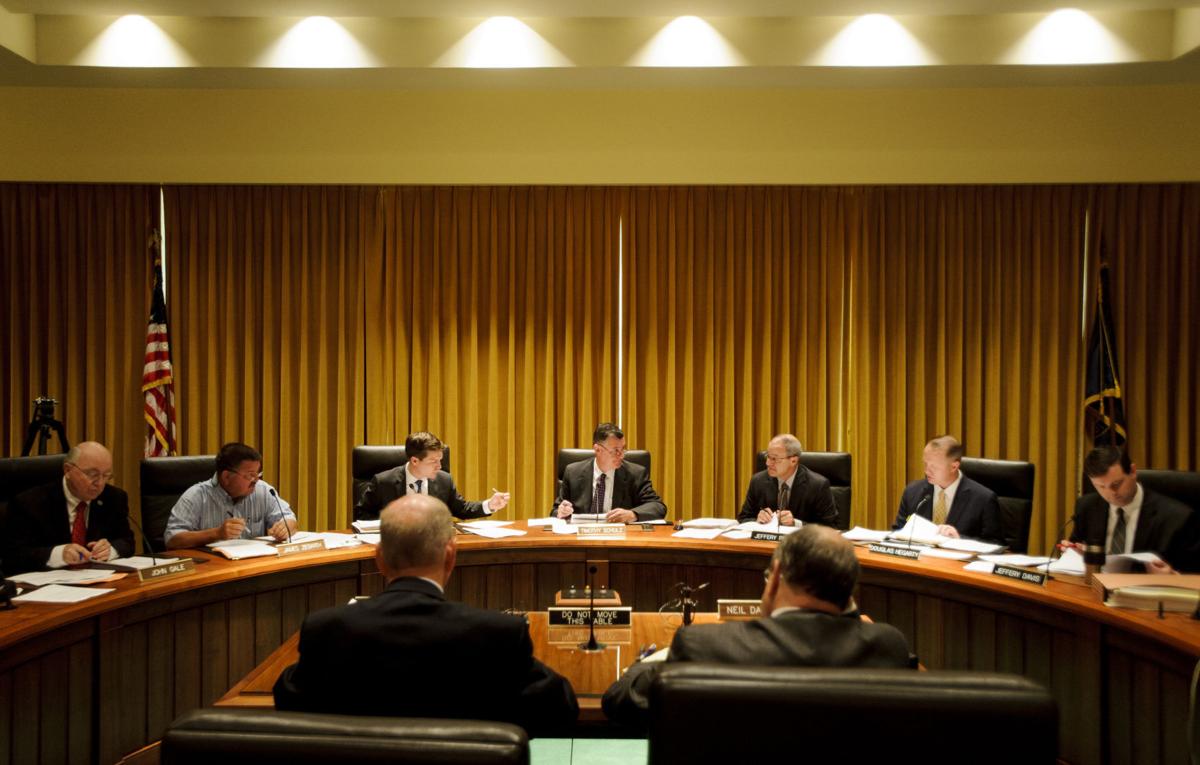 The Nebraska Accountability and Disclosure Commission meets on Friday at the Capitol. After meeting in a closed session, the commission fined state Sen. Bill Kintner $1,000 for misuse of government property after an investigation into his online activity. 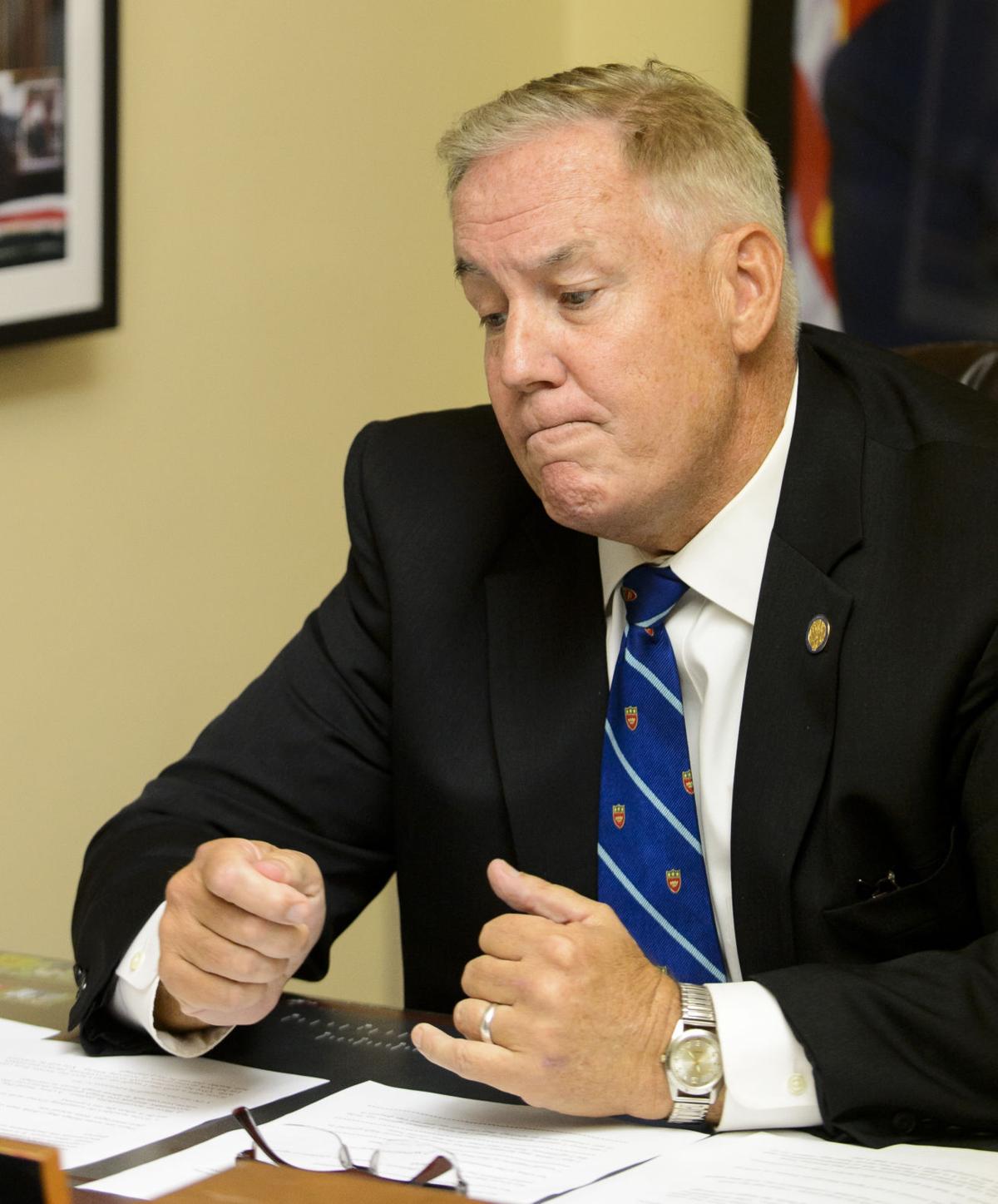 State Sen. Bill Kintner talks with the media in this file photo.

The online stranger goaded Bill Kintner for 30 minutes, urging him to remove his pants for the webcam.

At first, alone in a Boston hotel room, he resisted.

"I just can't do this," the outspoken, conservative state senator typed. "It would break my wife's heart if she knew I did this."

He hung up then, but his decision seven hours later — to resume the chat and give the woman what she wanted — resulted in Kintner falling victim to an online extortion scam, being fined Friday for breaking a law that restricts public officials' use of state computers, and being urged by Gov. Pete Ricketts and others to resign from the Nebraska Legislature.

Kintner, 55, refused to step down but said he has apologized to his wife and God.

The Nebraska Accountability and Disclosure Commission fined the Papillion lawmaker $1,000 for using his government-issued laptop for the live video exchange, which happened in July 2015 while he attended a conference.

The ruling drew swift reaction at the Capitol.

Omaha Sen. Ernie Chambers called Kintner a "guttersnipe" and a "vulgar hypocrite," and repeated his vow to pursue Kintner's impeachment if he doesn't step down.

And Speaker of the Legislature Galen Hadley said he was leaning toward supporting Kintner's expulsion from office and that the situation should be dealt with this year — possibly through a special legislative session.

"This puts his fellow senators in an exceedingly difficult position," Hadley said.

"Make me pleasure," she says at one point, according to transcripts compiled by the Nebraska State Patrol.

But Kintner is conflicted: "I don't want to sneak behind my wife's back," he tells her. "It's not about you, it is about me. You are smoking hot."

The woman, who used the name Vinciane Diedeort, continues pressing Kintner to remove his clothing.

Only when he returns after midnight does he do as the woman asks, exposing himself. And within minutes, she threatens to post the video on YouTube and share it with his Facebook friends if he doesn't wire $4,500 to an account in the Ivory Coast, which she claimed was for a deaf child.

Kintner reported himself to the State Patrol that day, telling investigators he'd fallen victim to a scam.

"I knew as a follower of Christ I needed to take quick and decisive action, and I did," Kintner said in a statement.

His wife of seven years, Lauren Kintner, is the governor's top policy adviser. She was diagnosed with ovarian cancer days after her husband's return from Boston.

News of Sen. Kintner's online activity didn't surface publicly until last week, and even then officials were reluctant to comment pending action by the Accountability and Disclosure Commission.

Ricketts acknowledged having known about the investigation but said he didn't make it public out of respect for Kintner's due-process rights.

Top Democrats have criticized the lack of transparency, noting that Kintner was chosen as a delegate to last month's Republican National Convention in Cleveland despite the ongoing investigation.

The case against Kintner is now resolved, but the file isn't closed on the extortion attempt, State Patrol spokeswoman Deb Collins said in an email. Such cases are often lengthy and can involve suspects in foreign countries, she said.

Kintner said investigators traced the scam to a small crime syndicate based in the Ivory Coast and using Russian computers.

Recorded video of the exchange was never saved on his computer, Kintner said. The scammer posted a brief clip, or GIF, of the recording online, but it has since been deleted.

Kintner's $1,000 civil penalty is half what the Accountability and Disclosure Commission could have ordered, part of a settlement agreement with Kintner's attorney.

Former Lt. Gov. Rick Sheehy made a similar deal in 2013 after using his state cellphone to make late-night calls to various women other than his wife.

Hadley said Kintner's action was "unbecoming a senator in the state of Nebraska."

Members of the Legislature's Executive Board will meet Aug. 19 to discuss their options.

Only the governor or a supermajority of the Legislature, 33 of 49 senators, can call lawmakers back into the Capitol before they reconvene as scheduled in January.

Impeachment would then require support from 25 senators, although some have questioned whether a state senator may be impeached at all under Nebraska law. Expulsion of a senator requires 33 votes.

Legislative staffers have estimated the cost of a seven-day special session at $65,000.

Ricketts spokesman Taylor Gage said the governor believes Kintner should resign "out of respect to the taxpayers."

"The governor's office is keeping open lines of communication with the speaker (Hadley) to see what course of action legislative leaders pursue," Gage said in a text message.

A previous version of this story had incorrect information on the number of votes needed to expel a senator.

Sen. Bill Kintner passed up an opportunity to apologize Friday to his District 2 constituents for his cybersex indiscretions.

Kintner apologizes only to God and wife, offers advice for men

As in Kintner's case, Accountability and Disclosure process can take months

A number of people asking questions about state Sen. Bill Kintner's alleged use of his legislative computer to exchange sexually explicit vide…

Kintner says he wants to respond, but can't yet

Sen. Bill Kintner posted on his Facebook page Monday afternoon a response to media inquiries for a comment on an investigation by the Nebraska…

Ricketts answers questions on his response to Kintner allegations

Gov. Pete Ricketts reiterated Monday that if it is shown that Sen. Bill Kintner of Papillion used his state computer for sexual purposes, he s…

Top Democrats say Gov. Pete Ricketts should have informed the public sooner about suspicions that state Sen. Bill Kintner of Papillion had use…

Chambers: Kintner should be impeached

A member of the Legislature's Executive Board said Saturday that if Sen. Bill Kintner doesn't resign his office because of a sexual video scan…

With video controversy, Kintner may have fallen for online scam

Amid allegations that he shared sexually explicit video of himself via his state computer, Sen. Bill Kintner appears to have been snagged by a…

Nebraskan reflects on experiences at the Democratic National Convention

SOUTH SIOUX CITY -- It was a whirlwind trip for Ryan Moore.

State Sen. Ernie Chambers of Omaha is threatening to read into the legislative record the transcript from Sen. Bill Kintner's cybersex encounter.

It appears members of the Legislature meeting this week can do more than just ask Sen. Bill Kintner to resign because he had cybersex on a sta…

The Legislature's Executive Board voted 9-0 Monday to send a letter to Sen. Bill Kintner asking him to resign by Sept. 2.

Legislature's Executive Board gives Kintner another chance to resign

Legislative leaders will give state Sen. Bill Kintner one more chance to resign before taking any action against him.

State Sen. Bill Kintner talks with the media on Aug. 5 after the Nebraska Accountability and Disclosure Commission fined him $1,000 for misuse of government property after an investigation into his online activity.

The Nebraska Accountability and Disclosure Commission meets on Friday at the Capitol. After meeting in a closed session, the commission fined state Sen. Bill Kintner $1,000 for misuse of government property after an investigation into his online activity.

State Sen. Bill Kintner talks with the media in this file photo. 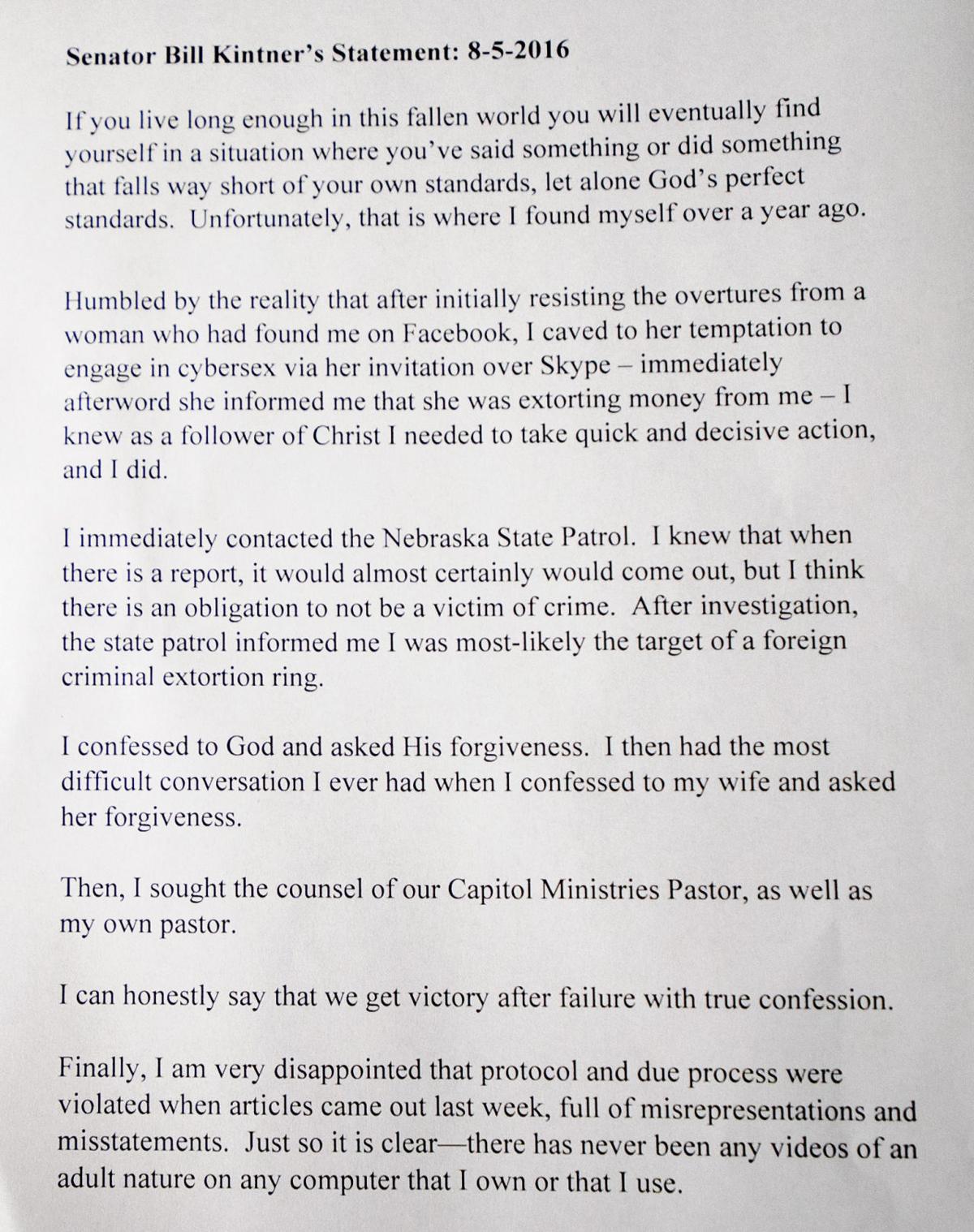 A statement issued by state Sen. Bill Kintner after her was fined $1,000 for misuse of government property. 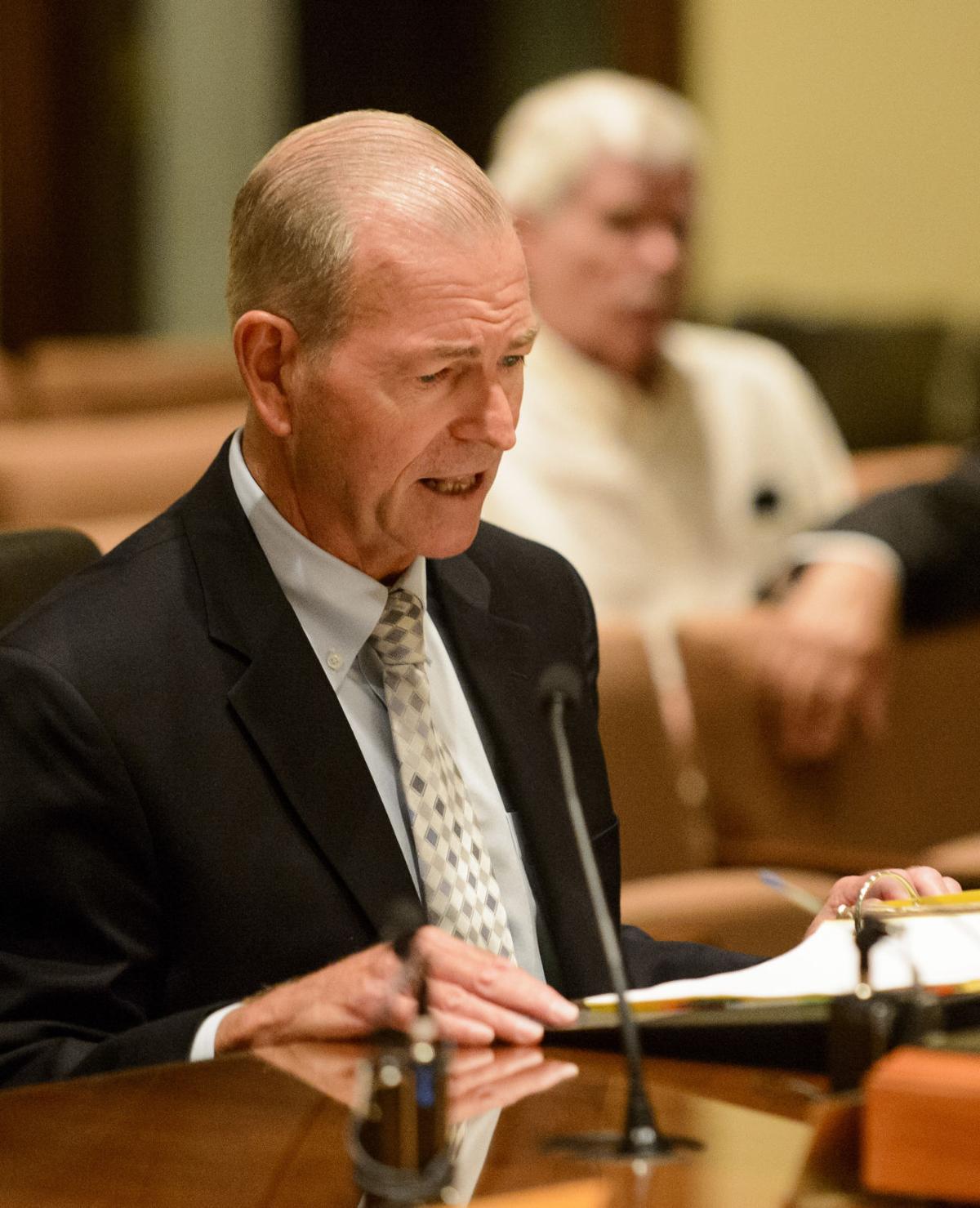 Frank Daley, executive director of the Nebraska Accountability and Disclosure Commission, speaks during the commission's meeting on Friday.