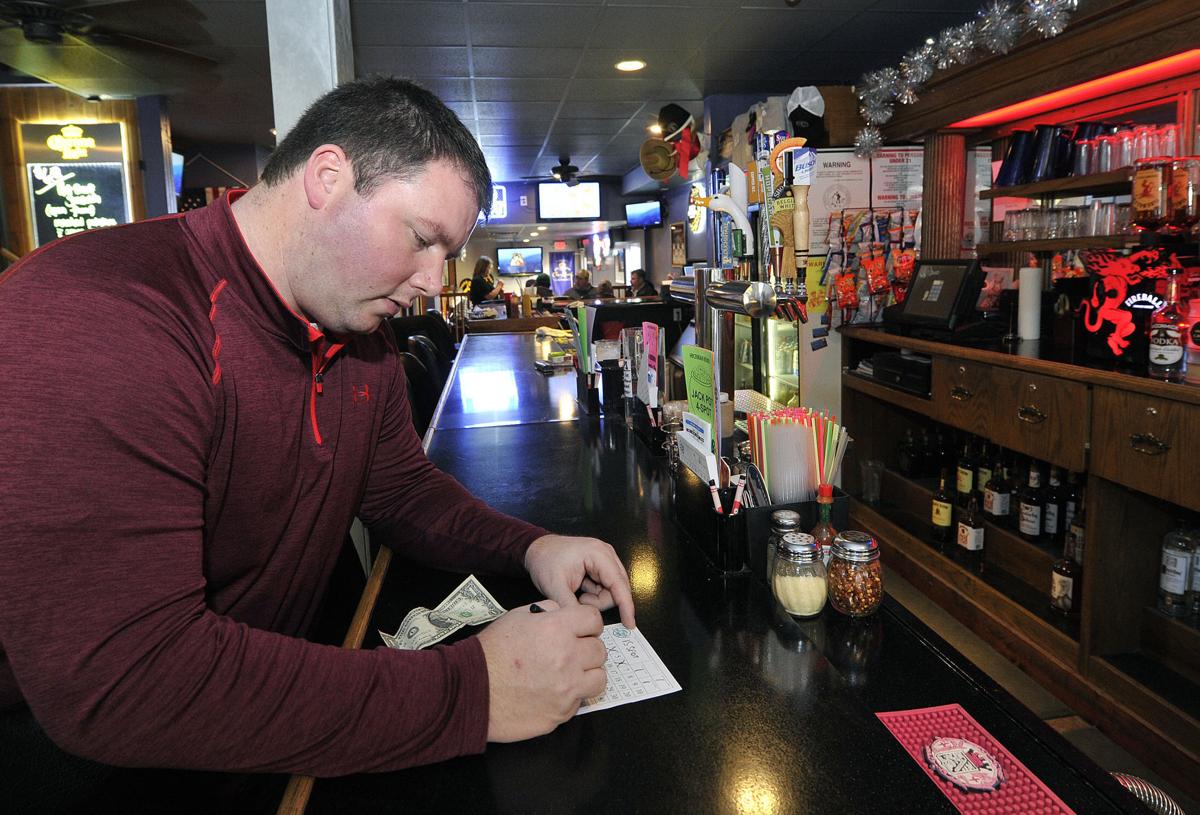 Austin Roper fills out a keno sheet in Hickman, where proceeds help with community projects. 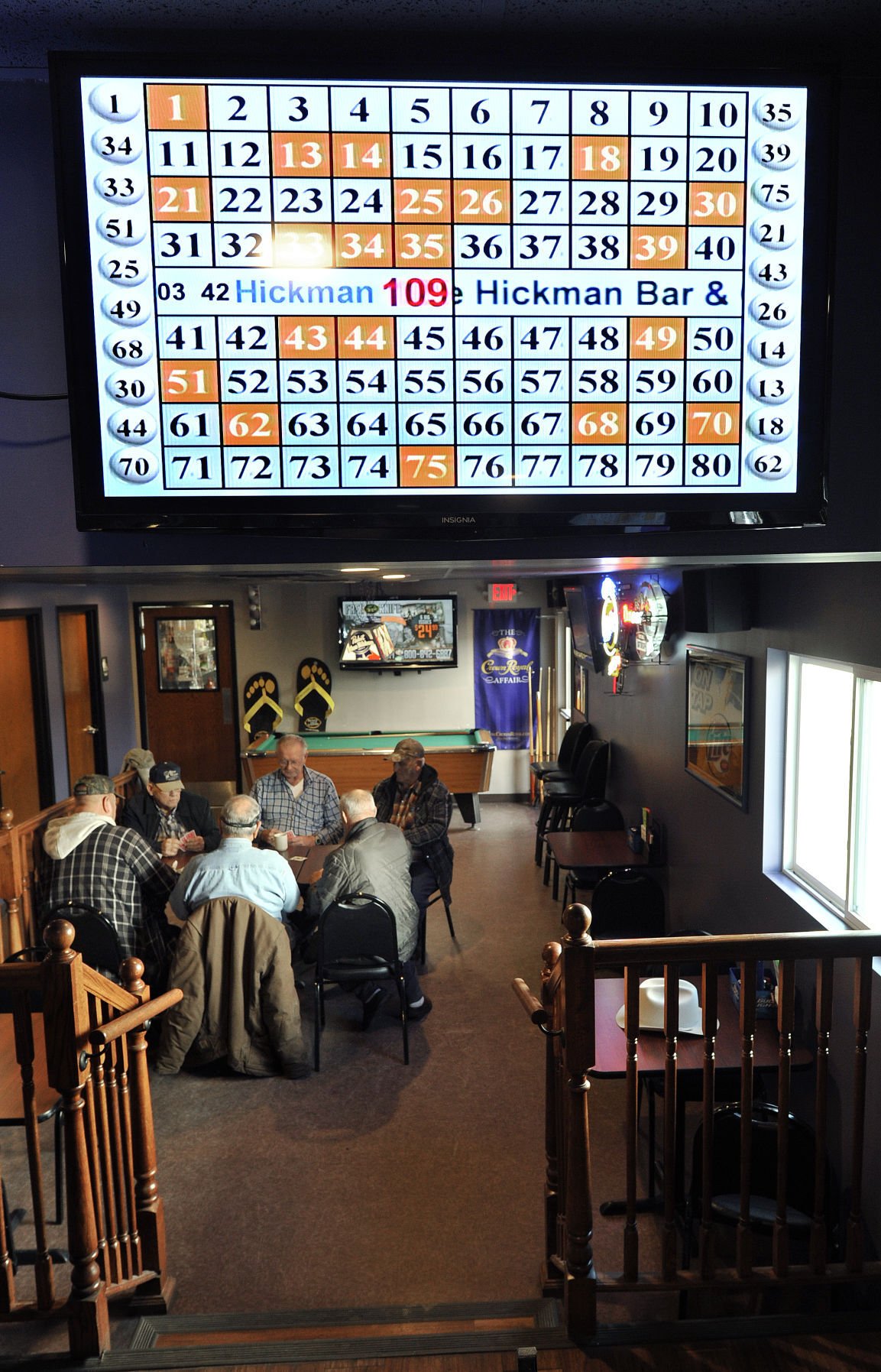 A video board displays the results of a new keno game every five minutes as regulars play cards and drink coffee at the Hickman Bar & Grill in 2017.

Nebraska gaming officials have accused a keno operator of conspiring to conceal $1.28 million via illegal bets and committing more than 260 violations of state rules and regulations.

The state Department of Revenue's Division of Charitable Gaming is seeking to fine Zeilinger Keno $263,000 and revoke its lottery operator and worker licenses, which could leave 30 Southeast Nebraska communities in need of a new company to provide the game of chance.

“We’re going to try and resolve what happened with the state and make sure it doesn’t happen again,” he said in an interview this week.

As soon as state officials informed him of the illegal bets, Zeilinger said, he shut down operations at the former Rough Reins bar in Utica and at the American Legion in Sutton until management could be changed.

But state officials allege he knew the people running bars in Utica and Sutton were placing bets on credit, which is illegal, and that he violated numerous other rules governing payout of prizes and bookkeeping, according to a motion for an administrative hearing on his licenses. The document accuses Zeilinger of covering for the people who placed the illegal bets and says he made at least $179,416.05 in commissions off the wagers.

In Nebraska, keno operations in a given town must be approved by local voters, and then the city, county or village contracts with an operator like Zeilinger Keno to provide machines to bars or restaurants that want to host them. Each one of those groups, plus the state, gets a portion of the gaming proceeds.

In Hickman, about $22,000 in keno proceeds last year helped get a $3.4 million community center built.

Hickman City Administrator Silas Clarke said the town is waiting to see the outcome of the Charitable Gaming Division’s administrative hearing before deciding whether to put out a call for a new keno operator.

All keno bets must be made with cash, according to state law, and no credit is allowed. And, the law says, people running the game can't bet while they're working.

Jadeen Strauss, owner of the now-closed Rough Reins bar in Utica, allegedly placed $933,500 in wagers on credit between Jan. 1 and June 4 last year, Revenue Department documents say. She pleaded no contest Tuesday to running a fraudulent lottery scheme, a felony, and is set to be sentenced in March.

To cover part of her keno debts, Strauss got $333,200 from a friend by telling the woman someone had stolen money and she needed help to keep the bar afloat, according to Revenue Department and court documents.

Gaming officials say Zeilinger knew that money had been wrongfully obtained to cover debts because the friend wrote a check directly to Zeilinger Keno in May for more than $44,000, which far exceeded the typical daily deposit for keno wagers.

Officials also believe Zeilinger knew Strauss wrote 12 checks worth more than $25,600 to cover short or missing deposits from an account that was supposed to be used to pay winners.

But Zeilinger said he didn’t realize anything was wrong until after the state looked into a suspicious spike in sales and called to tell him what investigators found.

He said he cooperated and told state officials he suspected Leota and Ronald Griess, who managed the American Legion in Sutton, also were taking bets on credit.

Investigators found that Leota Griess placed $348,000 in wagers on credit between Jan. 1 and June 30 last year, and the motion for hearing claims that Zeilinger Keno made $48,724 in commission off the illegal bets.

Charitable Gaming Division officials allege Zeilinger knowingly concealed money missing from the Sutton American Legion keno account and failed to report short and missing deposits to the city of Sutton and the Gaming Division as required by law.

State officials allege he wrote checks worth $23,332 to the Sutton account to cover missing deposits, then repaid himself by deducting that amount from its expected 7 percent sales commission.

Leota Griess said in a Tuesday interview that she and Ronald Griess have retired and given up their lottery worker licenses. Keno has resumed at the Sutton American Legion under new management.

A special prosecutor, Attorney Sara Bockstadter, has been appointed to review the Sutton case. No charges had been filed as of Wednesday.

The Zeilinger family got a start in the business with the Daily Double Steak House in Denton, one of the first keno establishments in Southeast Nebraska. His parents bought the bar in 1989 and began offering keno there in 1990.

Denton has reaped millions in keno proceeds, much of it from Lincoln residents before keno became available in the capital city, and used the money to build a community center, pave streets and sidewalks, put up a water tower, expand the town lagoon system and refurbish its baseball field.

“Keno has been very good to Denton," said Village Board Chairman Bill Edwards. "… It has been a big part of almost everything we’ve done for almost 25 years.”

Losing keno would be a life-changing event for the Lancaster County town, he said, and it would mean a complete re-evaluation of how it spends its money.

Zeilinger Keno is the licensed operator in 30 towns or counties, including:

Todd Zeilinger is a licensed lottery worker in 13 towns, including:

Keno bar where patrons won big up for sale

The small-town bar and restaurant where customers hit it big last fall when a keno machine malfunctioned is up for sale.

One of the regulars at Smartville Station figured out the keno machine was repeating numbers and shared the jackpot formula.

SPRINGFIELD — Authorities in Sarpy County are investigating the death of a man who was involved in a gunfight with relatives.

A 47-year-old Lincoln man arrested in a prostitution bust last summer was sent to prison this week.

Legislature says no to smartphone keno

Someone who played Nebraska Pick 5 on Tuesday in Lincoln is holding a ticket worth $260,000.

Starting in August, Nebraska Lottery players will be able to play Lucky for Life, a multi-state Lotto game.

Austin Roper fills out a keno sheet in Hickman, where proceeds help with community projects.

A video board displays the results of a new keno game every five minutes as regulars play cards and drink coffee at the Hickman Bar & Grill in 2017.