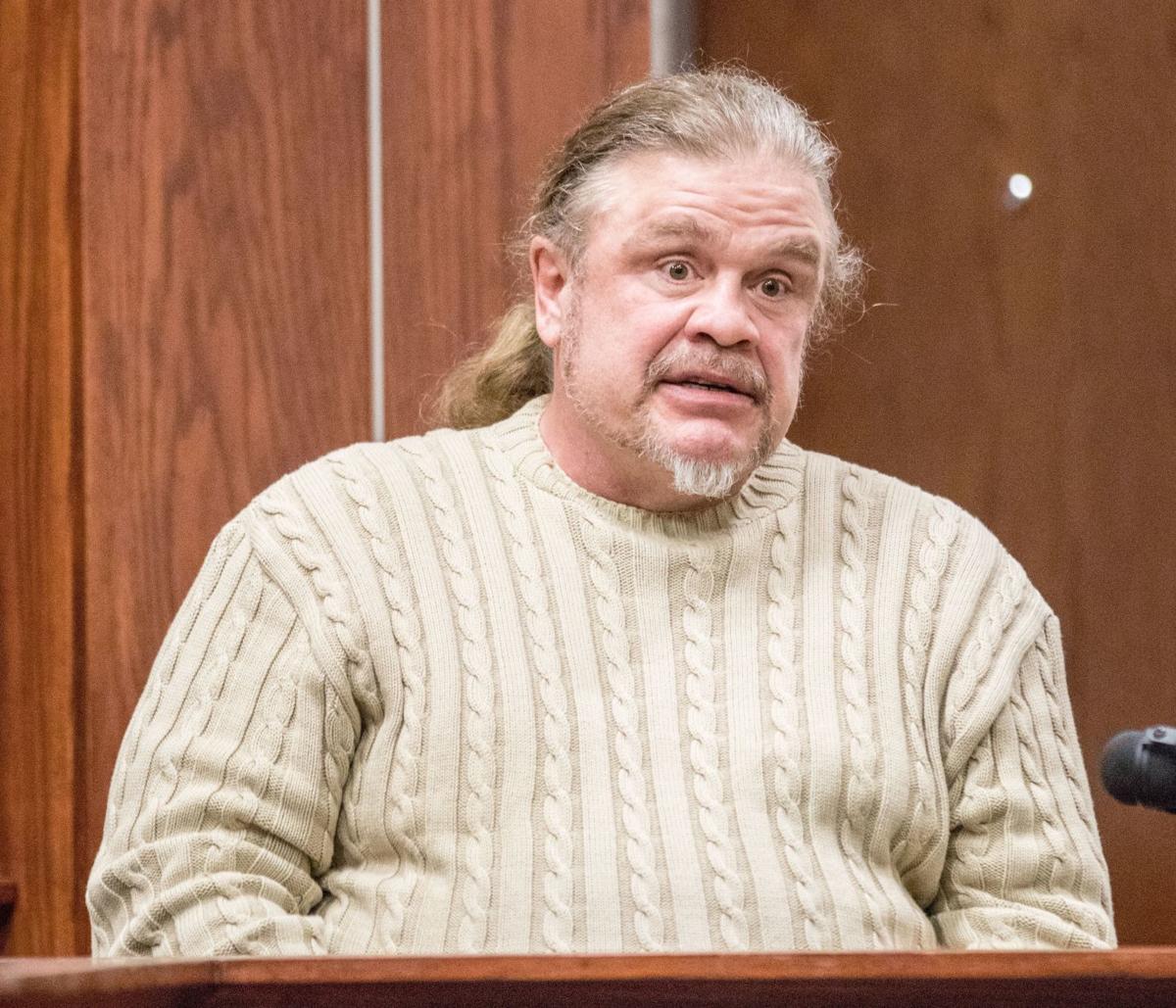 Former inmate John Wizinsky testifies in his suit against the state of Nebraska in Lancaster County District Court on Monday. 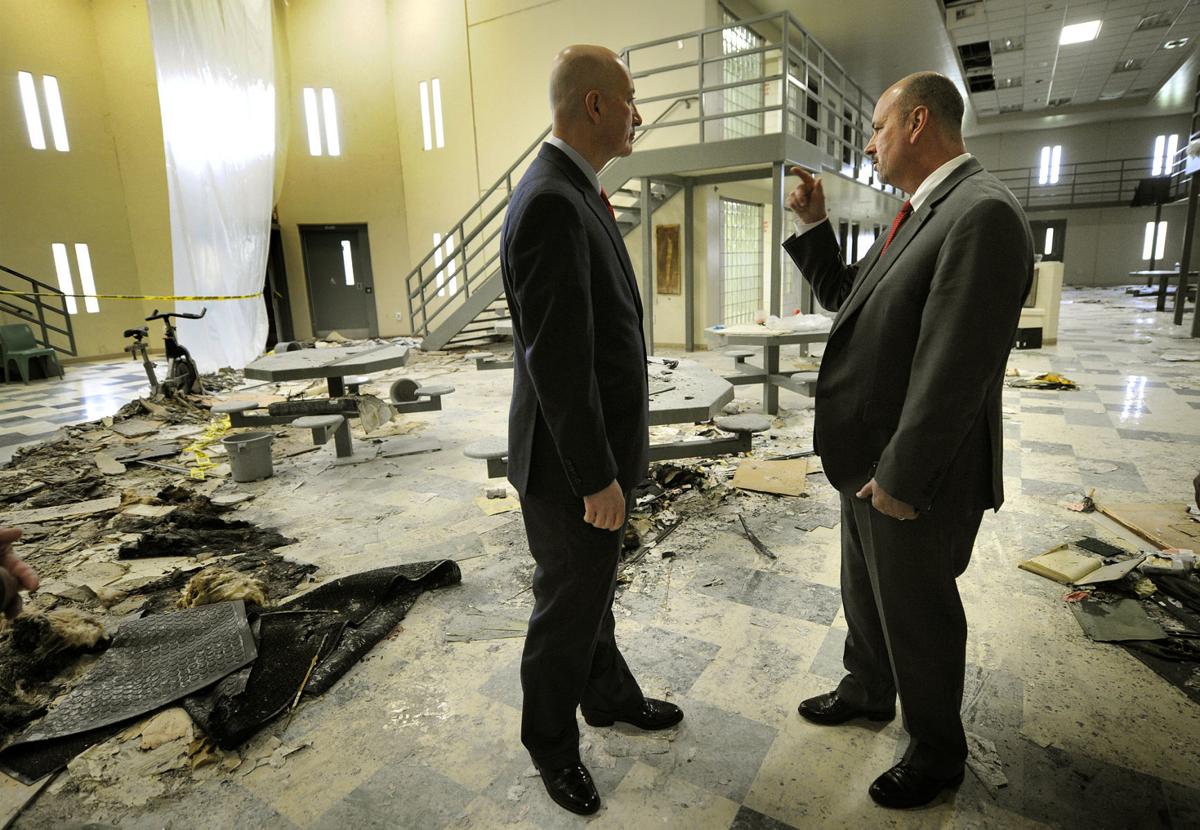 With the prison floor behind them littered with damage and debris, Gov. Pete Ricketts (left) and Nebraska Corrections Director Scott Frakes discuss the aftermath of the May 10, 2015, riot at the Tecumseh State Correctional Institution in this file photo.

A Lincoln judge has ruled against a former inmate who sued the state alleging its negligence led to the Tecumseh prison riot on Mother's Day 2015 and he was injured as a result.

"The Nebraska Department of Corrections is not required to prevent every single attack, assault, or altercation in prison. Rather, it must provide reasonably adequate protection," Lancaster County District Judge Kevin McManaman said in a 21-page decision Friday.

He found that the state had.

"We are pleased that after a thorough review of the facts the district court determined John Wizinsky could not show the prison was understaffed, could not show prison operations fell below accepted correctional standards, or that the actions of staff were unreasonable," Nebraska Attorney General Doug Peterson said in a statement Tuesday afternoon.

“I do not think that the legislature would intend to allow such a breach of policies and procedures under the discretionary function exception to the state tort claims act. We believe that the record will demonstrate to the appellate court that we met the burden to prove that the state was negligent and caused Mr. Wizinsky's injury,” she said.

At a trial this summer, Wizinsky alleged, among other things, that prison staff had left him without food or his diabetes medication for 18 hours and put him in danger by giving general-population inmates access to him and other protective-custody inmates.

But the judge said Wizinsky offered "insufficient evidence to convince the court of any breach by the defendant, which caused him to suffer injury entitling him to damages."

Furthermore, McManaman said, Wizinsky's lawsuit pertained to discretionary actions for which the state's liability is barred by sovereign immunity.

"Wizinsky's entire case focused on the events that occurred on May 10, 2015, at TSCI (Tecumseh State Correctional Institution), and the incidents which he tried to prove were handled negligently were all based on the discretion, actions and tactical decisions of the state employees during the riot," the judge said.

At trial, Shiffermiller alleged the state was negligent by:

* Failing to use reasonable care to protect Wizinksky from general-population inmates;

* Failing to properly staff the prison;

* Placing inmates at the Tecumseh prison despite improper staffing;

* Failing to use reasonable care to maintain security over the inmates and retreating;

* Allowing the Tecumseh prison to operate over design capacity;

* And failing to use reasonable care to have response teams available on call at a reasonable distance from the prison.

In May, Wizinsky testified that guards retreated and from a control center remotely opened cell doors after fires, set by rioting inmates, sent smoke into his unit. In the yard, no longer kept apart and without guards around, Wizinsky said he was hit after stepping in to help a man being beaten by other inmates with a metal piece from a pop machine.

He said he had been in prison before in Arizona and had experienced three riots previously. But none like this.

"This went on for hours," Wizinsky said during his testimony. "You didn't know if you were coming or going."

He said he's had nightmares and panic attacks since.

But Assistant Nebraska Attorney General Stephanie Caldwell pointed out that Wizinsky had PTSD, had planned to apply for disability and had complained about problems sleeping all before May 10, 2015.

She asked if he remembered passing the time in a cell playing pinochle.

The Mother's Day riot involved more than 400 inmates, lasted 11 hours and left two inmates, Shon Collins and Donald Peacock, dead. To date, no one has been charged in their killings.

Caldwell said "it was chaos by rioting inmates."

But, she argued, the Department of Correctional Services responded in a "consistent and competent manner" while ensuring the safety and security of inmates, staff and the general public.

In the end, McManaman agreed, saying conditions during the riot were far from optimal and concern that inmates may be injured from the fires and smoke outweighed the ordinary priority to keep protective-custody inmates separate from the general population.

And he found Wizinsky's testimony — about being hit or injured by someone in a prison miniyard as a result of being with general-population inmates — "simply not credible."

McManaman said Wizinsky had experienced several other prior acts of violence, "including once seeing an inmate beheaded." And there was nothing to show that Wizinsky suffered any injury from missing his medication one time, he said.

"The overwhelming evidence at trial showed that the retreat was for the safety of staff, and was the only reasonable course of action," the judge said.

Wizinsky's first trial, in November 2018, ended in a mistrial after Judge John Colborn recused himself because of his involvement in justice reform and knowledge of the state's prison overcrowding issues.

A missing 59-year-old woman who was found Monday in 3 feet of water about 3 miles east of Lyman has been identified, officials say.

Ex-prison yard supervisor recalls Mother's Day riot: 'They all started running at us'

The afternoon of the 2015 Mother's Day riot, Crystal Rempel, the yard supervisor at the Tecumseh State Correctional Institution, remembered ca…

John Wizinsky said he remembered being in the mini-yard at the Tecumseh prison on Mother's Day 2015, after fire alarms sent him outside with t…

A grand jury has indicted an 18-year-old Lincoln man for allegedly being a drug user in possession of a firearm on Sept. 19.

A 42-year-old Hickman man has been sentenced to eight to 25 years in prison for sexually abusing a young girl over a four-year period.

A Lancaster County judge sentenced a 56-year-old Lincoln man to 32 to 40 years in prison for sexually abusing a boy.

Former inmate John Wizinsky testifies in his suit against the state of Nebraska in Lancaster County District Court on Monday.

With the prison floor behind them littered with damage and debris, Gov. Pete Ricketts (left) and Nebraska Corrections Director Scott Frakes discuss the aftermath of the May 10, 2015, riot at the Tecumseh State Correctional Institution in this file photo.