The headlines have told the stories for decades of overcrowded prisons in Nebraska and the tensions, problems and administrative headaches that result.

That's not to mention the toll crowding takes on the physical and mental health of prisoners, families and staff that must work long hours of mandatory overtime amid threats of physical assaults.

“Psychologically people need a certain amount of life space,” prison psychologist Miriam Haworth said in 1976. “When pushing that many people closer together, survival becomes more of a crucial problem.”

Each time the state has reached an overcrowding crisis point over the years, the solution was to build or expand prisons in Lincoln, Omaha, Tecumseh, McCook. And they would fill up.

In 2003, not long after the opening of the Tecumseh State Correctional Institution, with the inmate population continuing at 132% of design capacity, the state called together a work group to develop a plan to prevent Nebraska's correctional system from bankrupting the state.

With its recommendations, Sen. Kermit Brashear introduced elements of that plan, including the Correctional System Overcrowding Emergency Act.

How prisons became so crowded — a timeline

"Although it might be tempting to adopt a policy of benign neglect to the crisis and leave it to someone else, the state does not have that option," Brashear told the Judiciary Committee during the bill's hearing.

The Legislature needed not to build its way out of an impending crisis but to plan its way out, he said.

The vision was to create new sanctions -- like house arrest, curfews, community service, restitution -- along with programs for nonviolent offenders who might otherwise serve prison sentences at great expense to the taxpayers of the state of Nebraska.

Expensive prison beds should be reserved for violent and uncooperative offenders while diverting nonviolent, high need offenders back to the community, he said.

But 17 years after that and many other attempts to bring inmate growth under control, Nebraska prisons are still in crisis, fueled by tough-on-crime politicians, prosecutors who demand mandatory minimum sentences and reforms that do not take hold.

The pressure continues to build, even as the Nebraska Legislature demands accountability from the Department of Correctional Services, the Board of Parole and the governor.

The effects of overcrowding continue, and the costs continue to rise. By 2018, annual state spending on each inmate had reached $38,000. And hundreds of millions of dollars had been invested in hiring and retaining protective services staff, paying overtime, adding new prison beds and ensuring safety and oversight.

"What I've seen over the past five years," said Inspector General of Corrections Doug Koebernick, "is that overcrowding impacts everything in the system, whether it's the providing of programming, the movement of people through the system, the ability to attract and retain staff."

The Correctional System Overcrowding Emergency Act passed in 2003 allowed the governor to declare an overcrowding emergency, should he or she choose to do so, when the inmate population reached more than 140% of design capacity.

It has not been used, in part because prison directors have told governors they could handle the increase in inmates within the prisons' operational capacity.

In 2015, with crowded conditions building and no emergency declarations, senators changed the wording of the law to require that if by July 1, 2020, the inmate population is over 140% capacity, the governor must declare an overcrowding emergency. And when the emergency is declared, the Nebraska Board of Parole must immediately consider or reconsider offenders who are eligible for parole -- a number that totals 850 today.

The release of prisoners, however, came with a caveat: The parole of an eligible prisoner can be deferred if public safety or institutional discipline is at risk.

In May, Nebraska prisons were at about 155% of design capacity. To get to 140%, Koebernick said, the population would have to decrease by approximately 600 offenders.

Once the release begins, the law says the Parole Board will continue granting paroles until prisons reach 125% of design capacity. That would mean release of about 1,000 inmates.

But here's the catch. Because of the wording of the bill and the way the administration and Board of Parole have handled overcrowding in the past, lawmakers and Koebernick say a large release of prisoners will not happen, or even begin, on July 1.

The Department of Corrections and Board of Parole have called a news conference for Thursday to "discuss progress made by both agencies in preparing inmates for parole as well as plans moving forward."

Department of Correctional Services Director Scott Frakes told the Judiciary Committee more than a year ago the prisons probably would not meet the deadline. Gov. Pete Ricketts' administration interprets the law as not requiring a mass release of prisoners, but rather a prompt to take another look at parole status of eligible inmates.

Parole Board Chairwoman Rosalyn Cotton, first appointed by Gov. Dave Heineman in 2005, said recently the board will continue to work to parole inmates, as it has been, but would not jeopardize public safety in doing so.

Omaha Sen. Steve Lathrop said that after he returned to the Legislature in 2019 he quickly realized Frakes had no sense of urgency about the overcrowding emergency law.

Just the fact that the prisons are at the point of an overcrowding emergency is a failure on the department's part to enact reforms or take steps necessary to achieve that 140% of design capacity, Lathrop said.

The Legislature's Judiciary and Appropriations committees have been trying to provide policy and funding support to help alleviate overcrowding and meet the July deadline, and the department continues to rebuff that assistance, sticking to its own plan.

"Maybe they have some plan that they haven't told me about," Lathrop said, "but I haven't heard one that will get them below 140%."

Lathrop tried last year to allow a more gradual reduction of the prison population beginning in July, going to 135% in the six months after the declaration, 130% in the second half of 2021, and 125% beginning Jan. 1, 2022.

It's been difficult, Lathrop said, for him and other lawmakers to get needed information from the Corrections Department. He recently had to file a Freedom of Information request for documents and emails, and was told initially it would cost more than $300.

That signals a breakdown in the ability of the legislative branch to provide oversight of the executive branch, a key function of the Legislature, he said.

"That should be concerning to people in the state," he said. "They've simply just said, 'I'm not responding.'"

Options to deal with overcrowding

Koebernick said the Legislature, governor and department have several options.

* Building its way out of overcrowding appears to be the department's choice. New beds have opened in the past several years and more are slated for construction. Frakes is exploring the building of a new prison with 1,600 new beds.

* More sentencing reforms could be done, but several attempts in recent years have so far failed or been less than effective.

* Or changes could be made to help people become really good candidates for parole and to not come back into the system.

None of those seems to have affected overcrowding in a positive way over the past 10 to 15 years, Koebernick said.

A recent report by the JFA Institute to the Department of Corrections showed Nebraska inmate population increased by 7.7% between June 2018 and mid-December 2019, attributed to a 4.4% increase in admissions coupled with a 15% decrease in parole releases.

By the year 2030, according to the JFA study, the Nebraska prison population is projected to be at 7,327, an increase of about 2,000 inmates.

The COVID-19 pandemic is about the only thing that has reduced the numbers, now down by about 200 to 5,380 because court dates for people charged with crimes in Nebraska, and thus sentences, have been delayed.

"If this hadn't happened, our numbers would be at all-time highs," Koebernick said. "And we'd be looking at an even more severe overcrowding situation."

The overcrowding and understaffing in Nebraska’s prisons affects not only the lives of thousands of families, but taxpayers who must fund solutions. This series seeks to give a deeper understanding of the crisis as pressure builds to find answers to long-standing problems.

Prisons director Scott Frakes and Rosalyn Cotton, chairperson of the Nebraska Board of Parole, speak about the July 1 deadline to certify if the inmate population exceeds 140 percent of design capacity.

This week's local crime and court updates from The Lincoln Journal Star.

Family and friends of inmates in the state's prisons will be able to resume visits starting the week of July 13. 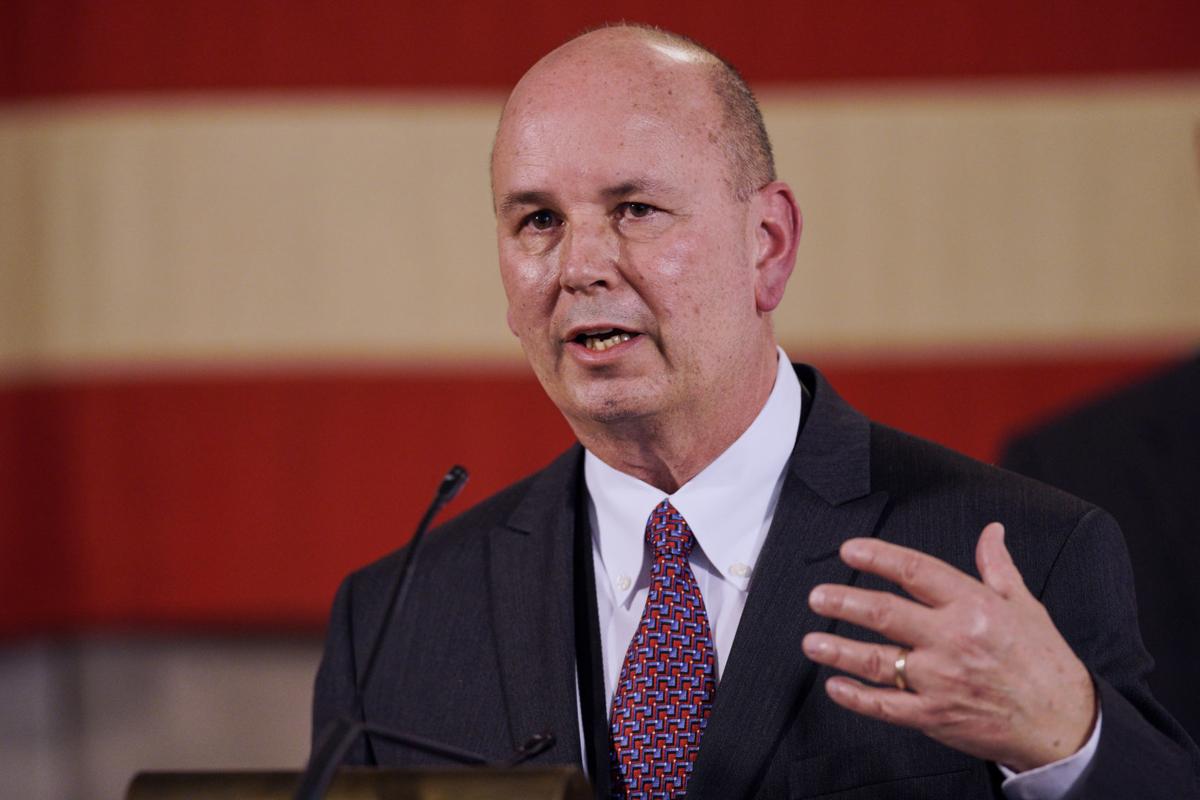 Scott Frakes, director of the Nebraska Department of Correctional Services, speaks during a news conference in Lincoln in April. 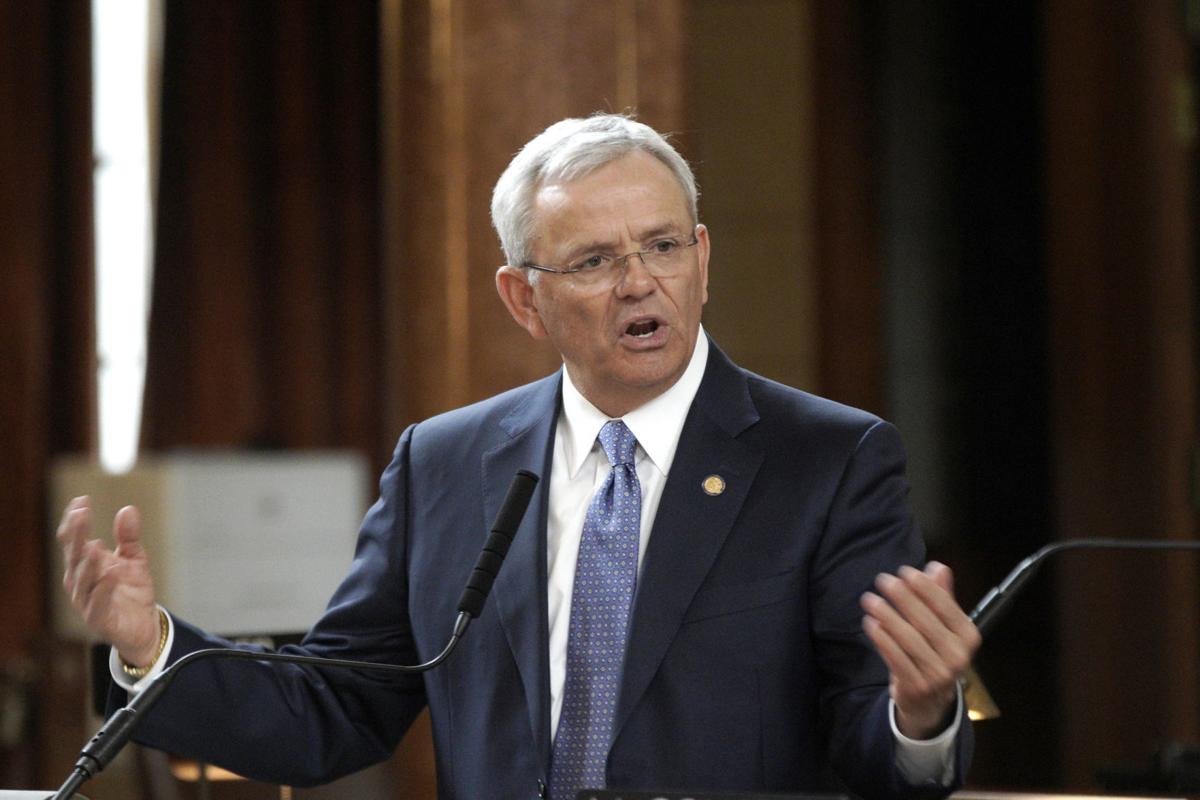