'It's been a hard time for everyone': Legislature approves redistricting
0 Comments
Share this
1 of 7 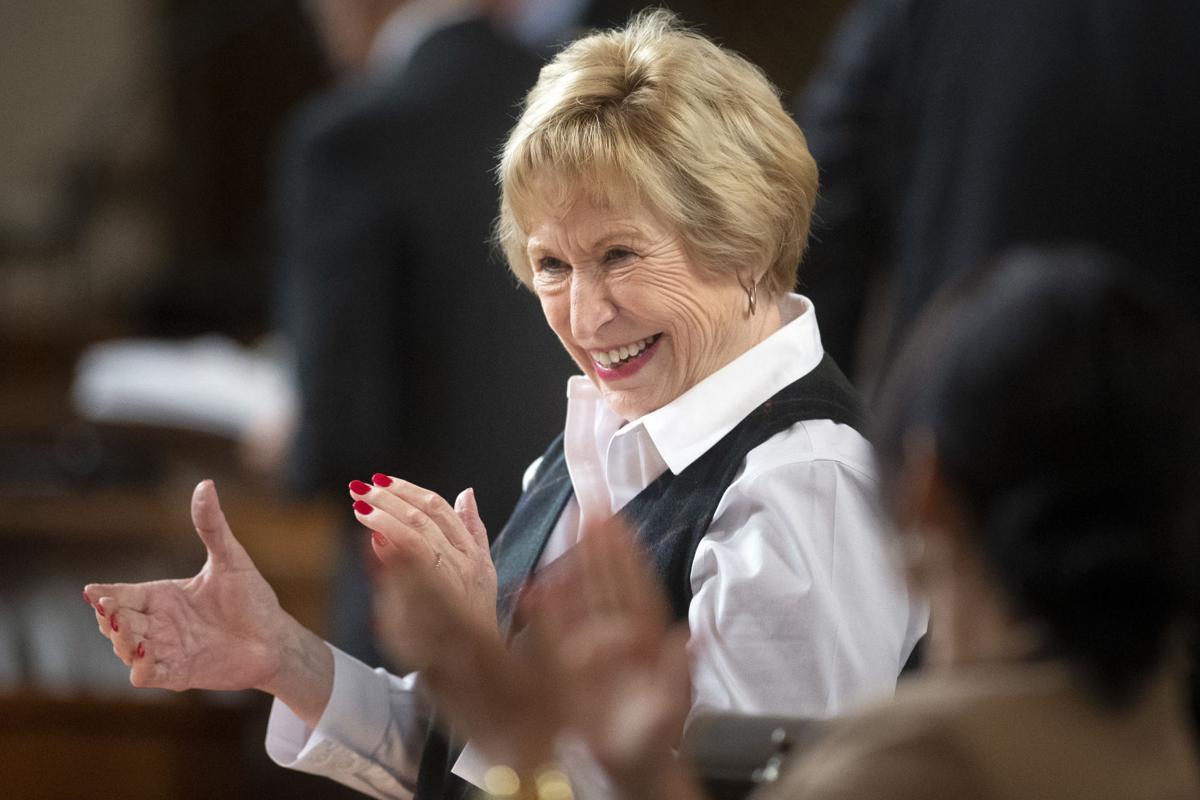 Sen. Lou Ann Linehan of Elkhorn, who chaired the Redistricting Committee, cheers after the special session comes to a close Thursday at the Capitol. 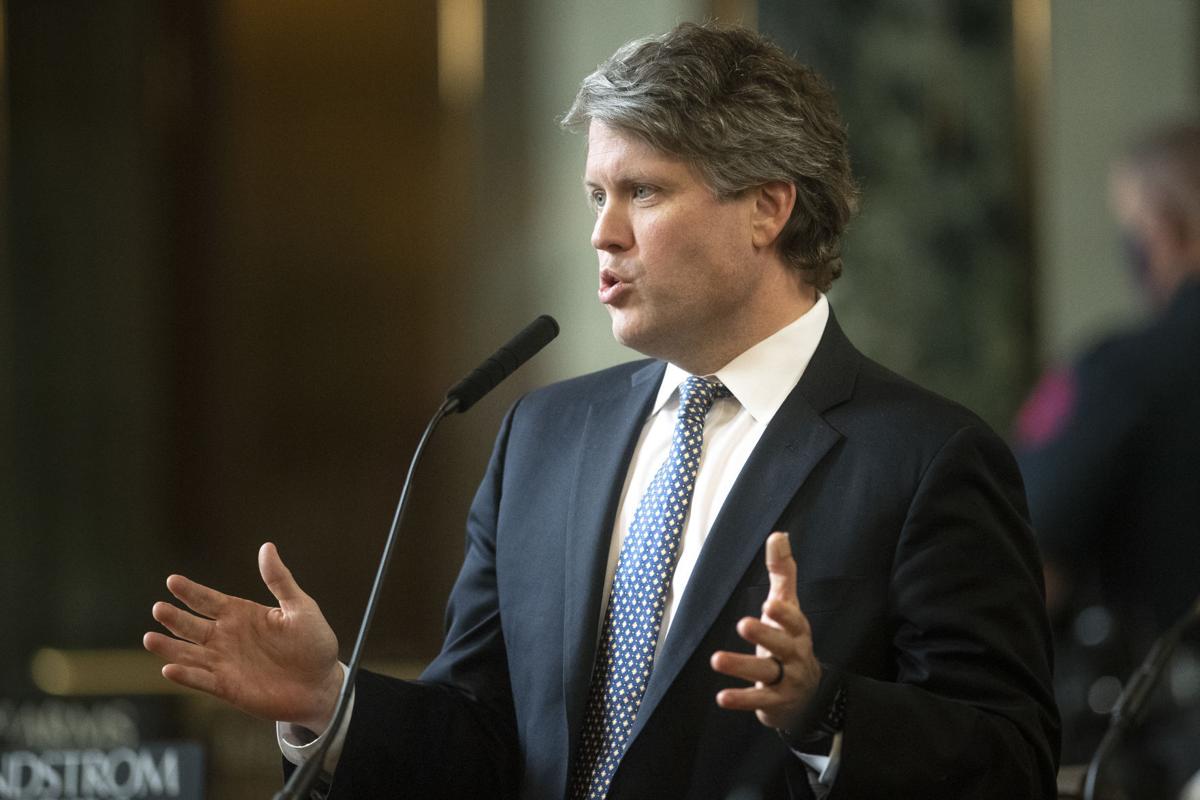 Speaker of the Legislature Mike Hilgers of Lincoln speaks Thursday, the final day of the redistricting special session at the Capitol. 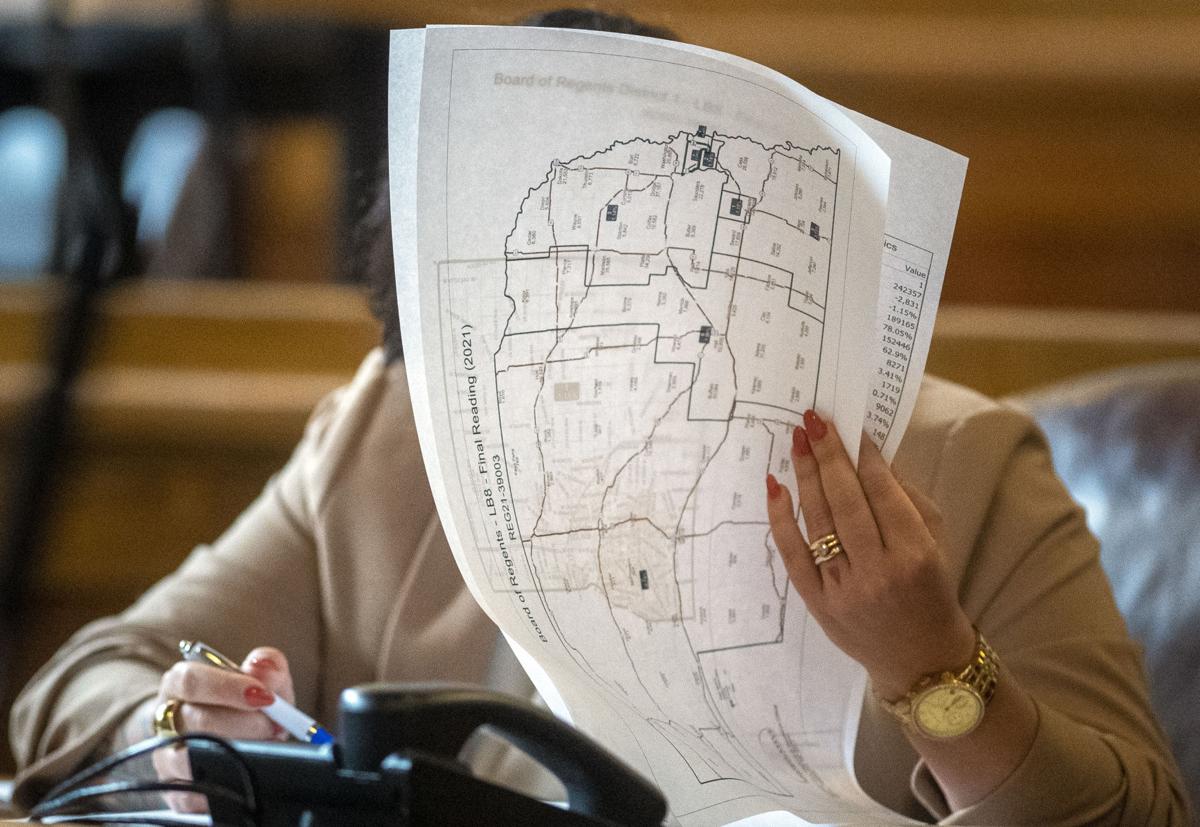 Sen. Jen Day of Omaha looks at a map on Thursday during the special session on redistricting at the Capitol. 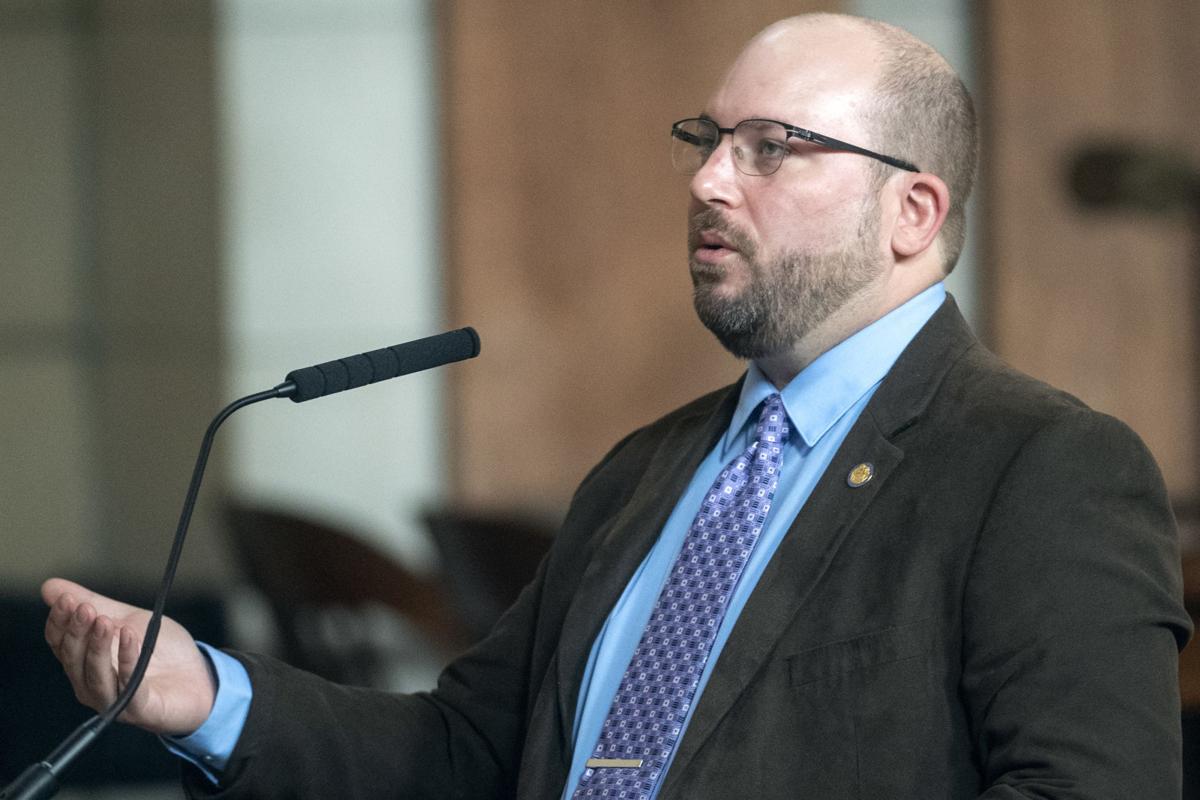 Sen. Matt Hansen of Lincoln speaks during the special session on redistricting on Thursday at the Capitol. 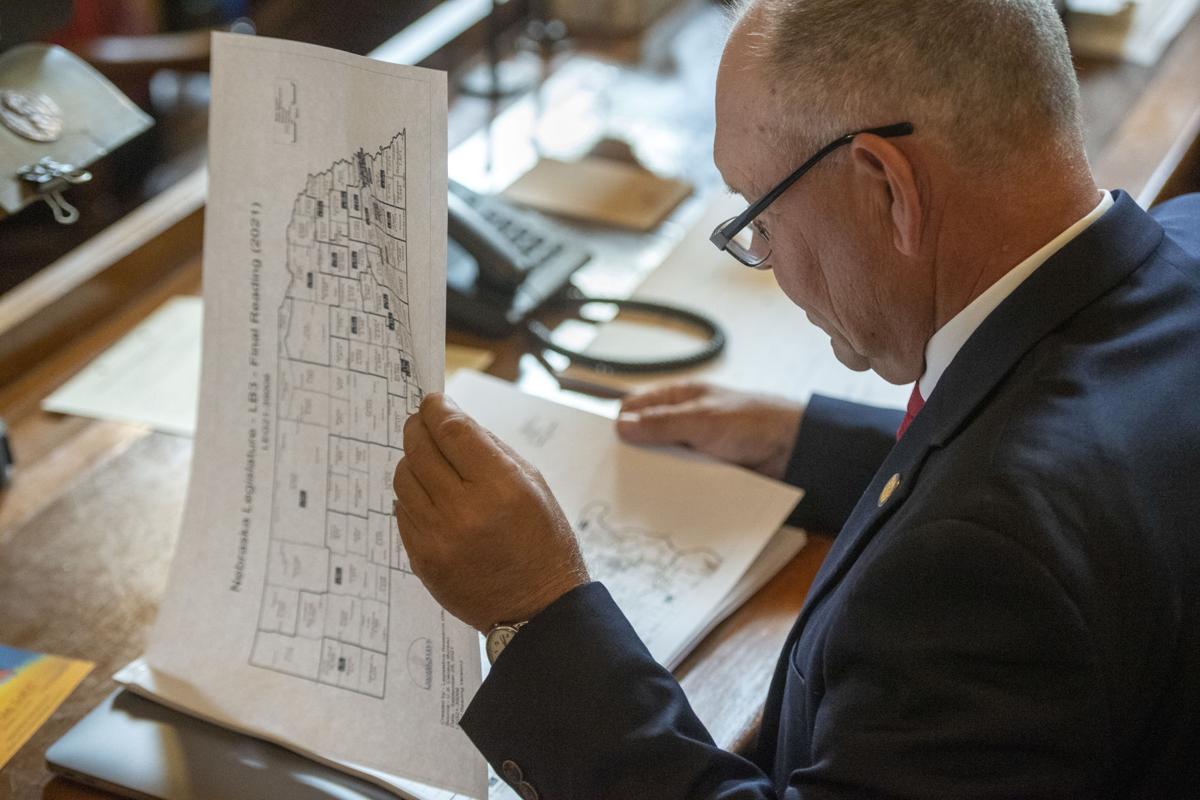 Sen. Tom Brandt of Plymouth looks at a redistricting map Thursday at the Capitol. 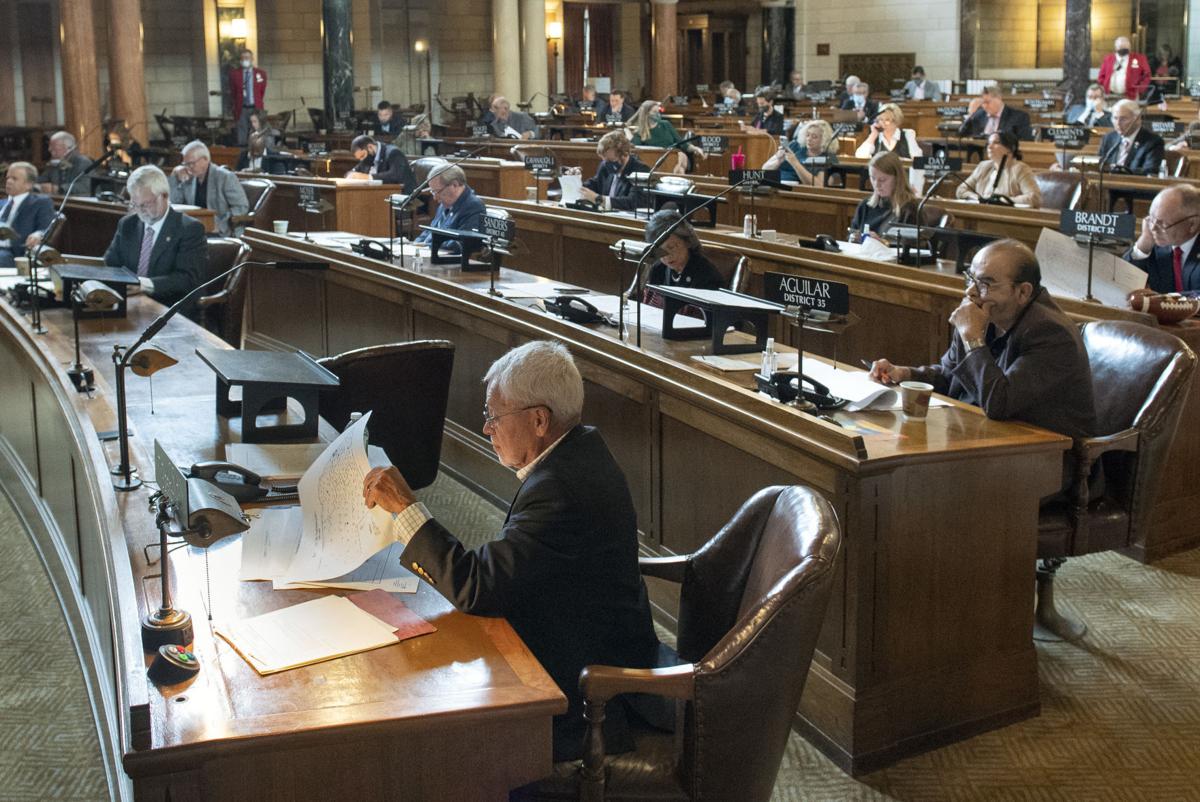 Senators sit by their desks at the final day of the special session on redistricting at the Capitol. 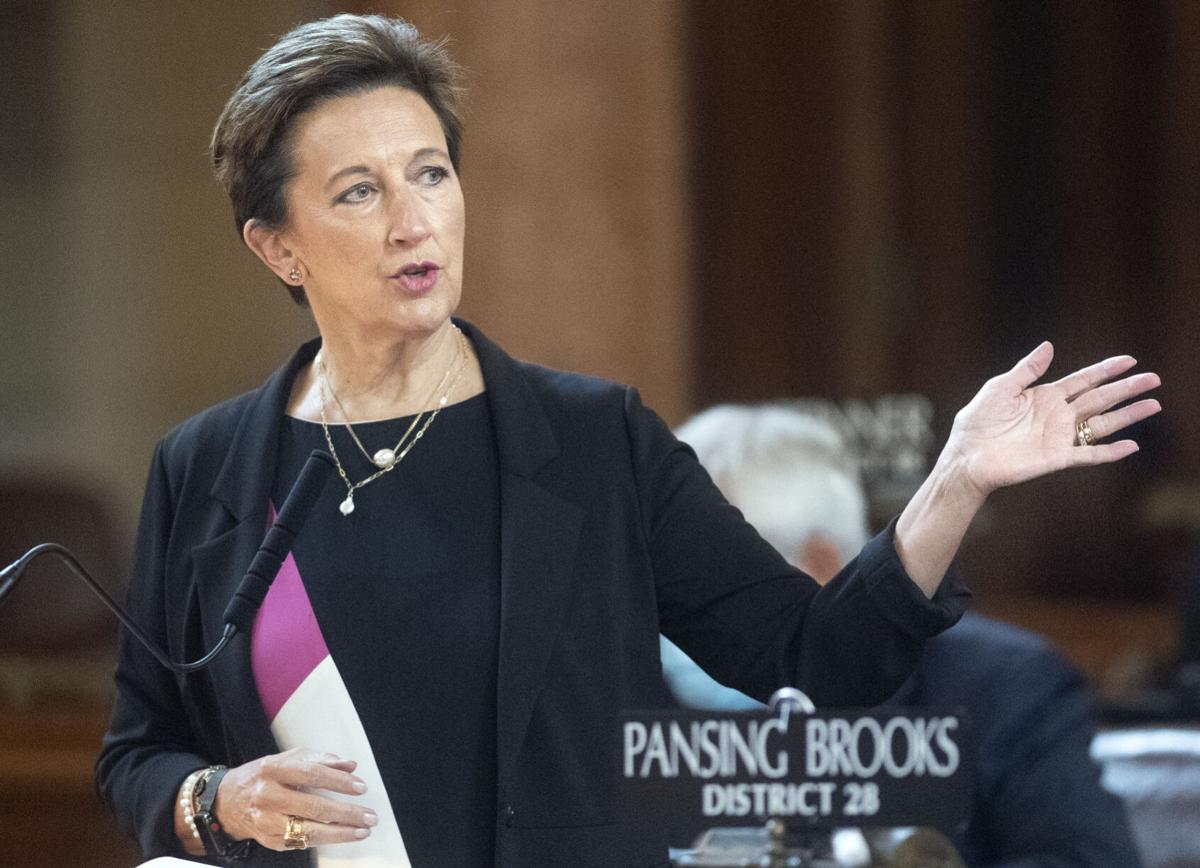 Sen. Patty Pansing Brooks of Lincoln speaks Thursday during the special session on redistricting at the Capitol.

The Legislature completed its redistricting work Thursday with enactment of plans to redraw legislative and congressional districts that somewhat unexpectedly attracted support from members of both political parties.

A congressional redistricting proposal (LB1) that keeps Douglas County intact in the 2nd District while adding rural Saunders County and its largely Republican vote to the metropolitan Omaha mix was enacted on a 35-11 vote, with all opposing votes cast by senators who are Democrats.

Four Democrats voted to enact the bill, and two chose not to cast votes on the measure.

A legislative redistricting plan (LB3) that subtracts one senator from rural Nebraska and adds a urban senator in metropolitan Omaha in response to population growth tracked by the 2020 census was enacted on a 37-7 vote.

Five of the seven dissenting votes were cast by senators who are Democrats, but eight Democrats voted for the proposal, while another four chose not to cast a vote.

The unexpected movement toward some agreement ran counter to expectations that the redistricting process would solidly divide senators along party lines even though they are elected on a nonpartisan basis to serve in Nebraska's unique one-house Legislature.

The Legislature completed its work on the 13th day of a special session called to tackle the COVID-delayed redistricting process in advance of the approach of the Legislature's regular session in January.

Redistricting was triggered by results of the 2020 census, which were delayed by the pandemic.

Sens. Lou Ann Linehan of Elkhorn, a Republican, and Justin Wayne of Omaha, a Democrat, led the negotiations that produced the final results.

"It was a very frustrating process," Wayne said, "but we got to a good result."

Looking back at negotiations among Redistricting Committee members that at times appeared to be heading toward a partisan impasse, Linehan said: "I'm constantly reminded how capable Sen. Wayne is."

At one point in the struggle to reach some agreement, Speaker Mike Hilgers of Lincoln stepped in to push the committee toward a resolution of competing proposals, triggering one late night of negotiations that approached midnight.

"It has been a hard time for everyone," Linehan said.

Hilgers led senators in expressing appreciation for the committee's work, triggering a standing round of applause.

Also enacted were bills redistricting the Nebraska Supreme Court, the University of Nebraska Board of Regents, the State Board of Education and the Nebraska Public Service Commission.

The results of the redistricting decisions will be reflected in the 2022 elections; a deadlock or delay in the redistricting process could have disrupted next year's election calendar, perhaps delaying the May 10 primary.

Wayne said "this was the most transparent redistricting process" ever conducted in Nebraska, with open sessions of the Redistricting Committee — largely demanded by Sen. Carol Blood of Bellevue — and proposed maps made available on the legislative website for the public to examine as the process moved forward.

While 11 of the Legislature's 17 Democrats voted against the congressional redistricting plan, Sens. Jen Day of Omaha, Mike McDonnell of Omaha, Patty Pansing Brooks of Lincoln and Blood voted yes.

Sens. Lynne Walz of Fremont and Anna Wishart of Lincoln chose not to vote.

Erdman and Groene had supported an alternative plan that would have protected rural districts.

Four Democrats chose not to vote on the legislative plan — Wayne, Wishart, Sen. Wendy DeBoer of Bennington and Sen. Eliot Bostar of Lincoln — who had earlier voted against an amendment adopting the revised proposal, which divides some Lincoln legislative districts into an urban-rural mix.

The Legislature's redistricting logjam broke open Friday after a morning of closed discussions and negotiations, then swept downstream at some…

“Washington‘s bipartisan habit of pinballing from one crisis to the next makes things worse, not better," Sen. Ben Sasse said.

Emily A. Ethington, who has served as a field director for the Republican Party in Sarpy County and for her twin sister, state Sen. Julie Slama, has been named Sarpy County election commissioner.

Both during and after the special session, some members of the Nebraska Legislature questioned aloud whether the once-in-a-decade task of redrawing voting maps would be better left to an independent commission.

If Gov. Pete Ricketts were to make Sen. Justin Wayne a judge, he would also have the opportunity to appoint Wayne’s successor in District 13, representing north-central and northeast Omaha.

Forty-eight Nebraskans representing a broad range of interests -- from business to nonprofits to education -- signed up to present their views to senators.

A former Gretna City Council member and small-business owner has thrown her hat in the ring for a legislative seat newly added to Sarpy County.

The Human First Coalition effort has "saved thousands," the Lincoln congressman said during an interview with BBC World Service.

Jana Hughes said her "top priority will always be making the lives of families, small business owners and farmers better."

Sen. Matt Hansen said he "agreed to drop a filibuster" which he had begun to mount against the redistricting plan in Lancaster County because he became convinced that "moving to next January would be worse."

Patty Pansing Brooks, who will complete her term-limited eight years as a member of the nonpartisan Legislature at the end of next year, jump-started her campaign with news media contacts in Columbus, Norfolk and Fremont.

Sen. Lou Ann Linehan of Elkhorn, who chaired the Redistricting Committee, cheers after the special session comes to a close Thursday at the Capitol.

Speaker of the Legislature Mike Hilgers of Lincoln speaks Thursday, the final day of the redistricting special session at the Capitol.

Sen. Jen Day of Omaha looks at a map on Thursday during the special session on redistricting at the Capitol.

Sen. Matt Hansen of Lincoln speaks during the special session on redistricting on Thursday at the Capitol.

Sen. Tom Brandt of Plymouth looks at a redistricting map Thursday at the Capitol.

Senators sit by their desks at the final day of the special session on redistricting at the Capitol.

Sen. Patty Pansing Brooks of Lincoln speaks Thursday during the special session on redistricting at the Capitol. 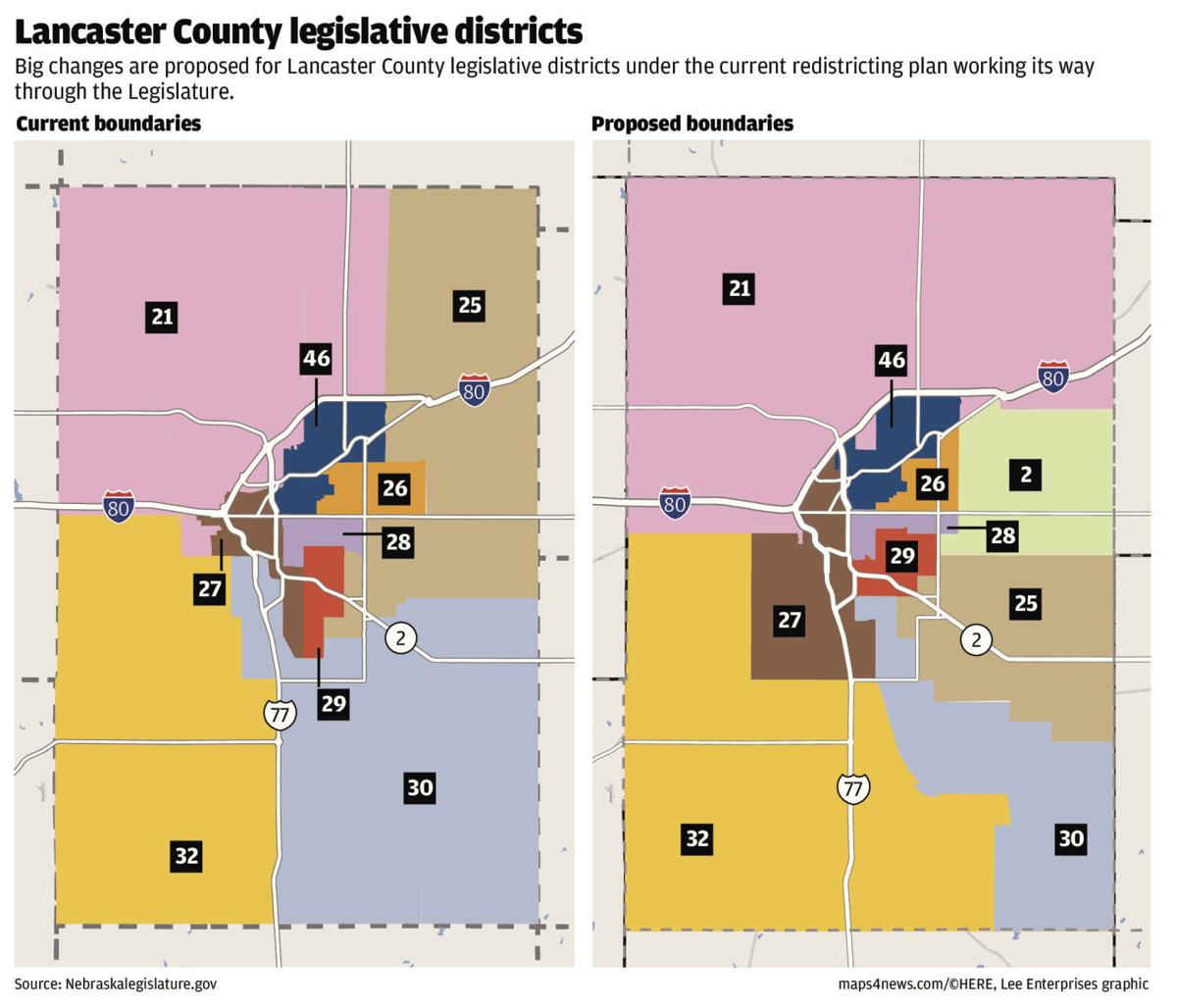