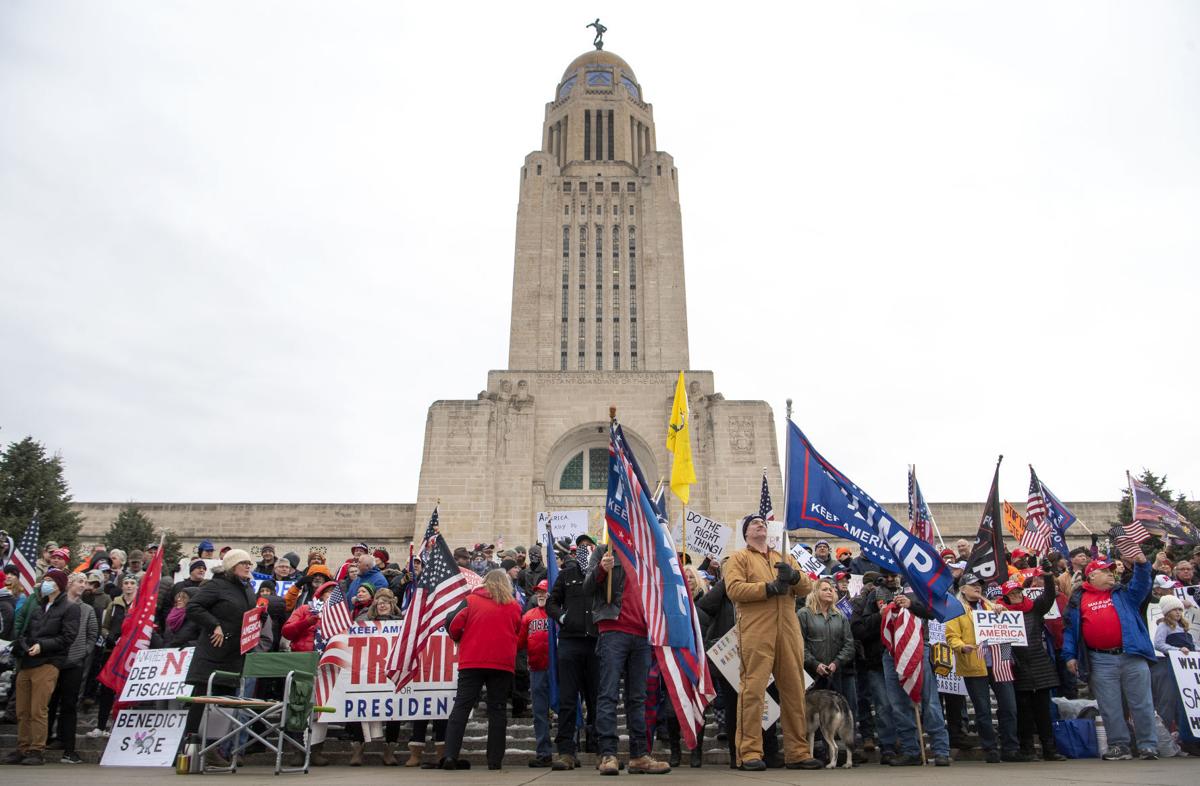 Supporters of President Donald Trump rally on the north side of the state Capitol on Wednesday. 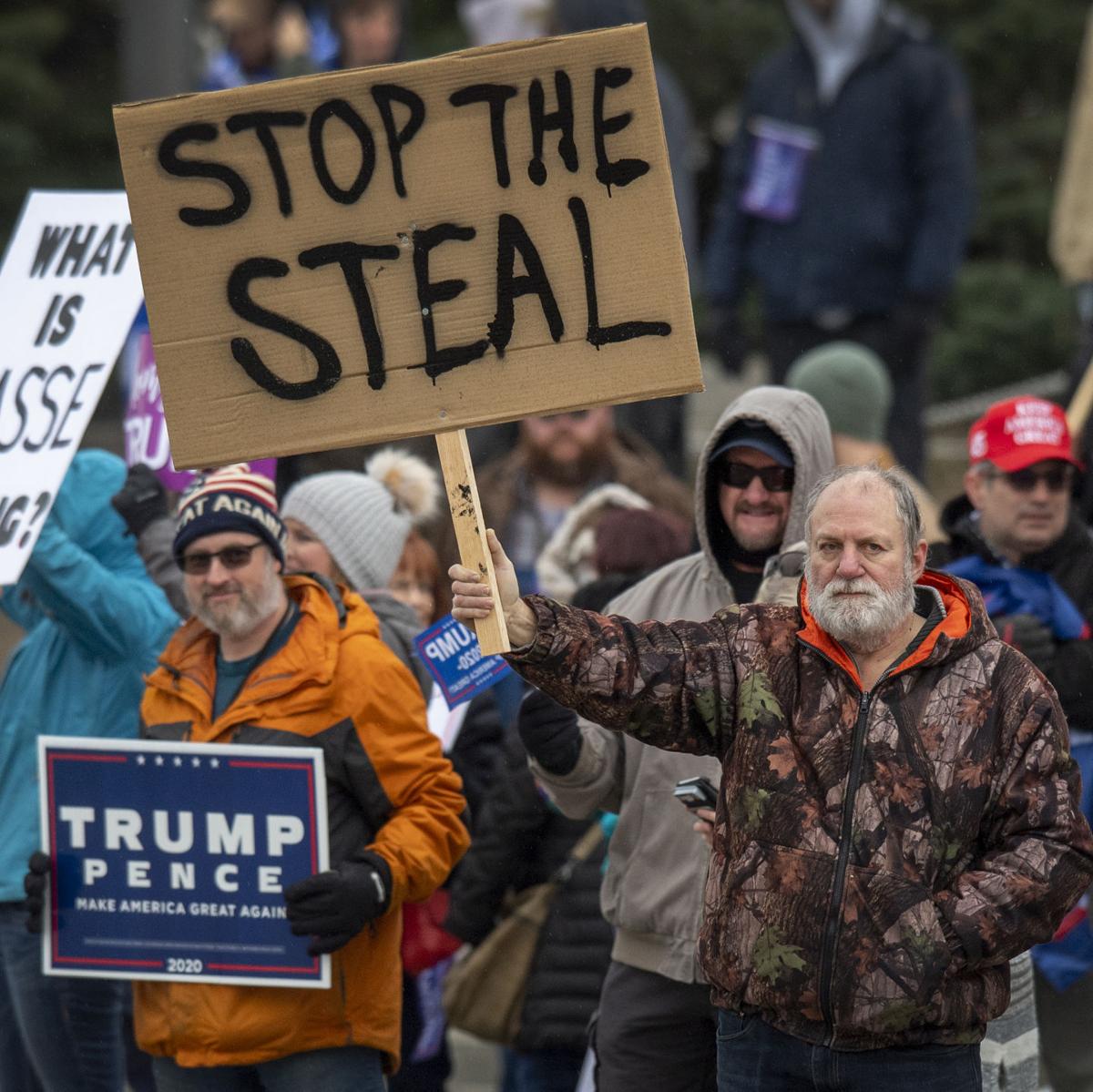 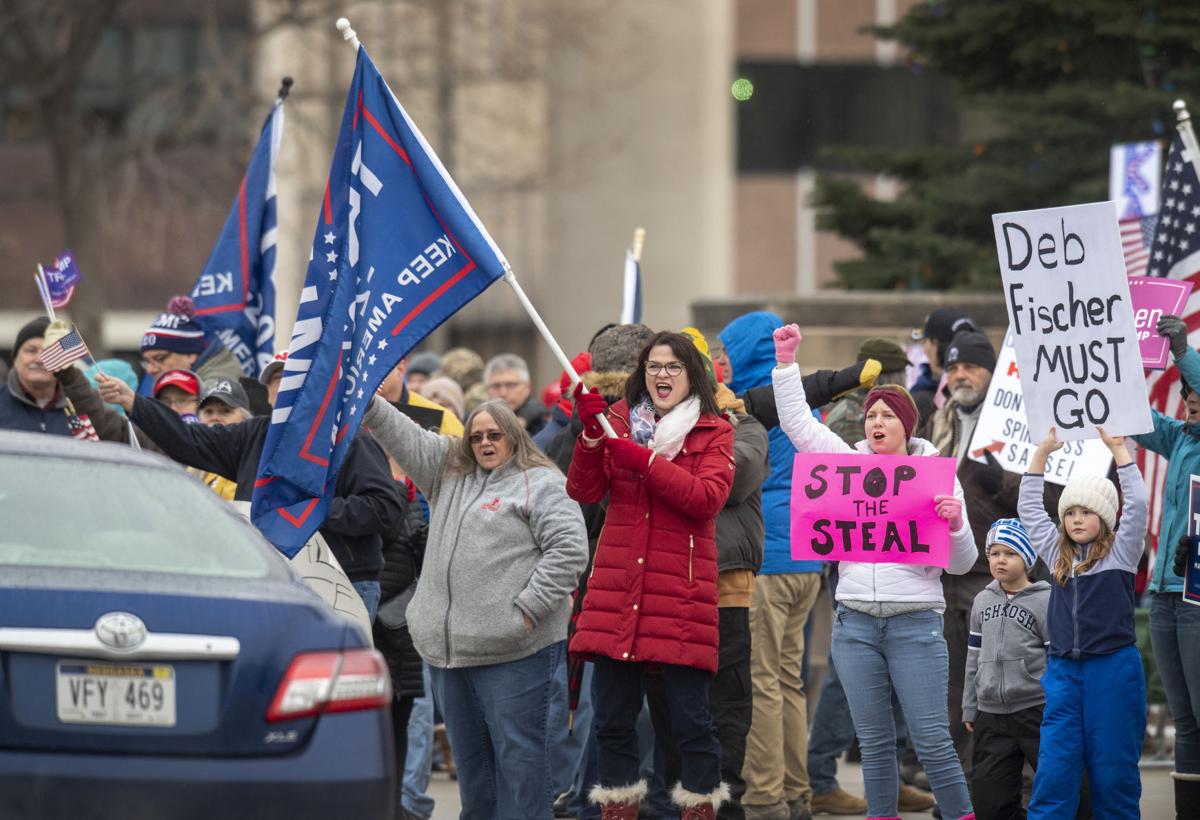 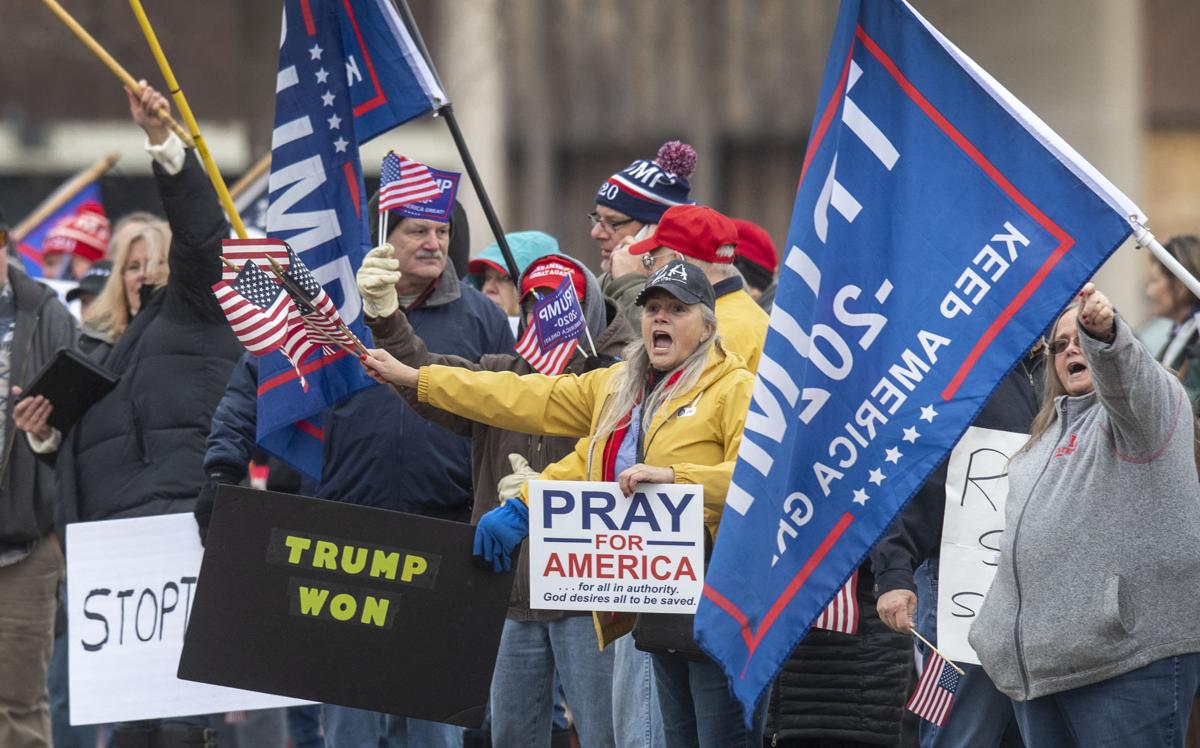 Several hundred people gathered on the north steps of the state Capitol on Wednesday in support of President Donald Trump's effort to overturn the results of the 2020 election.

As some angry Trump supporters violently stormed the U.S. Capitol building in Washington, attendees of a "Pro-Trump Freedom Rally" in Lincoln waved Trump flags, chanted "Stop the Steal" and other slogans, posed for pictures and saluted passing motorists who honked their support.

Some threw snowballs at vehicles with passengers who hurled anti-Trump statements toward the crowd, or confronted a small group of counter-protesters on the north side of K Street during the three-hour event.

Tim Davis, who organized Wednesday's rally, said it grew out of the "Stop the Steal" demonstrations that were organized at the Capitol every Saturday following the Nov. 6 election.

Some of the estimated 400 attendees came from as far as Sidney, Davis said, and more events are being planned across the state in the weeks and months to come.

Nebraska's congressional delegation decried the breach of the U.S. Capitol by a mob intent on disrupting the certification of the electoral votes confirming Joe Biden as the next U.S. president.

Davis said he doesn't condone the violence seen in Washington, or in other parts of the country, as scores of lawmakers — all Republicans — promised to oppose counting the Electoral College vote Wednesday.

But, the Omaha man said, Congress should delay counting the Electoral College votes, a largely ceremonial act, in order to "take a serious look at the allegations that have been put out there" regarding fraud in battleground states.

"All we want is for someone to listen," Davis said. "These people are sick and tired of the representatives not listening to them."

For example, Davis said lawmakers should look into a video purportedly showing a stack of ballots being inserted into a counting machine several times — one of several claims debunked by Georgia election officials.

Other attendees of Wednesday's rally said they, too, believe the election was stolen from Trump, and echoed the president's numerous false claims that have circulated on social media and cable television.

Talli Kratochvil of Pleasant Dale and Tina Cole of Lincoln pointed to what they claimed was a "circumvention of the Constitution" by election officials in Pennsylvania to accept and count ballots arriving by mail three days after Election Day.

That decision has been appealed to the U.S. Supreme Court, which has not indicated whether it will hear the case.

Kratochvil and Cole said the unwillingness of elected leaders — they named Sens. Ben Sasse and Deb Fischer — to look into the unsubstantiated claims brought them to the state Capitol on Wednesday.

"It's been lies and deceit and fraud, and no one in Washington is willing to look at it," said Kratochvil, who worked with LNK Recall, an effort in December to recall Lincoln's mayor and four city council members. "If it's all good and fair, there shouldn't be problems looking into it."

Like Davis, the women said they intend to continue demonstrating on behalf of Trump, his "America First" agenda and fighting against what they said was widespread election fraud.

Cole said she and other Trump supporters have been "discouraged and put down" for backing the president, and have been complacent "for too long."

"We've been trampled and stomped down and made to feel like we can't have an opinion," Cole said. "We're peaceful people; we're God-loving people. We just want our voices to be heard."

PHOTOS: PROTESTS IN LINCOLN AND WASHINGTON

Fischer will vote to reject Trump challenge of electoral votes

"I will uphold my oath and vote to affirm the decision of the Electoral College," Republican Sen. Deb Fischer said.

What happened inside the Capitol where rioters took over the secured building for about four hours wasn't fully clear to Fanchon Blythe and her companions until they returned to their hotel mid-afternoon.

U.S. Rep. Adrian Smith was the only member of the Nebraska congressional delegation to vote against formally validating Joe Biden’s presidential election victory.

The Proud Boys, (a white-supremacist group) and the Oath Keepers (a far-right militia group) were heavily involved in the raid, the leader of the new counterterrorism center at the University of Nebraska at Omaha said.

Ricketts says he will not restrict weapons at state Capitol

On Monday, Michigan moved to ban the open carry of weapons at its Capitol after the FBI warned of possible armed protests this weekend.

President Trump’s uncompromising, unorthodox and unpredictable style ushered in several shifts that will affect Nebraska for years to come.

In a video posted on YouTube, Nebraska's Republican senator repeats his disagreements with President Trump in advance of a GOP state meeting on Feb. 13 that may consider an effort to censure him.

Papillion resident Robert Anthony attended the Sarpy meeting via Zoom and voted for censure. He said he's tired of the disconnect between the beliefs of "liberty-loving" Republicans, and some who make it to Washington, D.C.

Supporters of President Donald Trump rally on the north side of the state Capitol on Wednesday.