Geneva residents want to see its YRTC reopen, with some changes
View Comments
Share this
{{featured_button_text}}
1 of 2 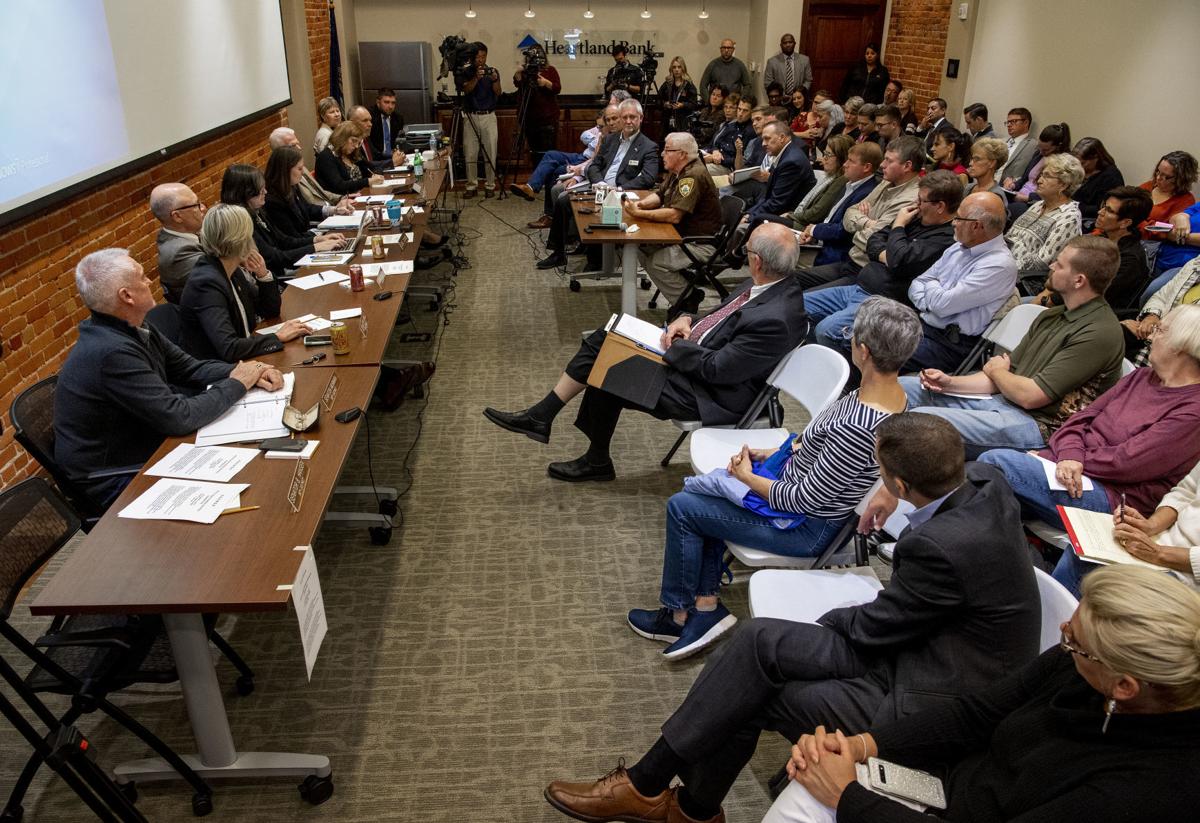 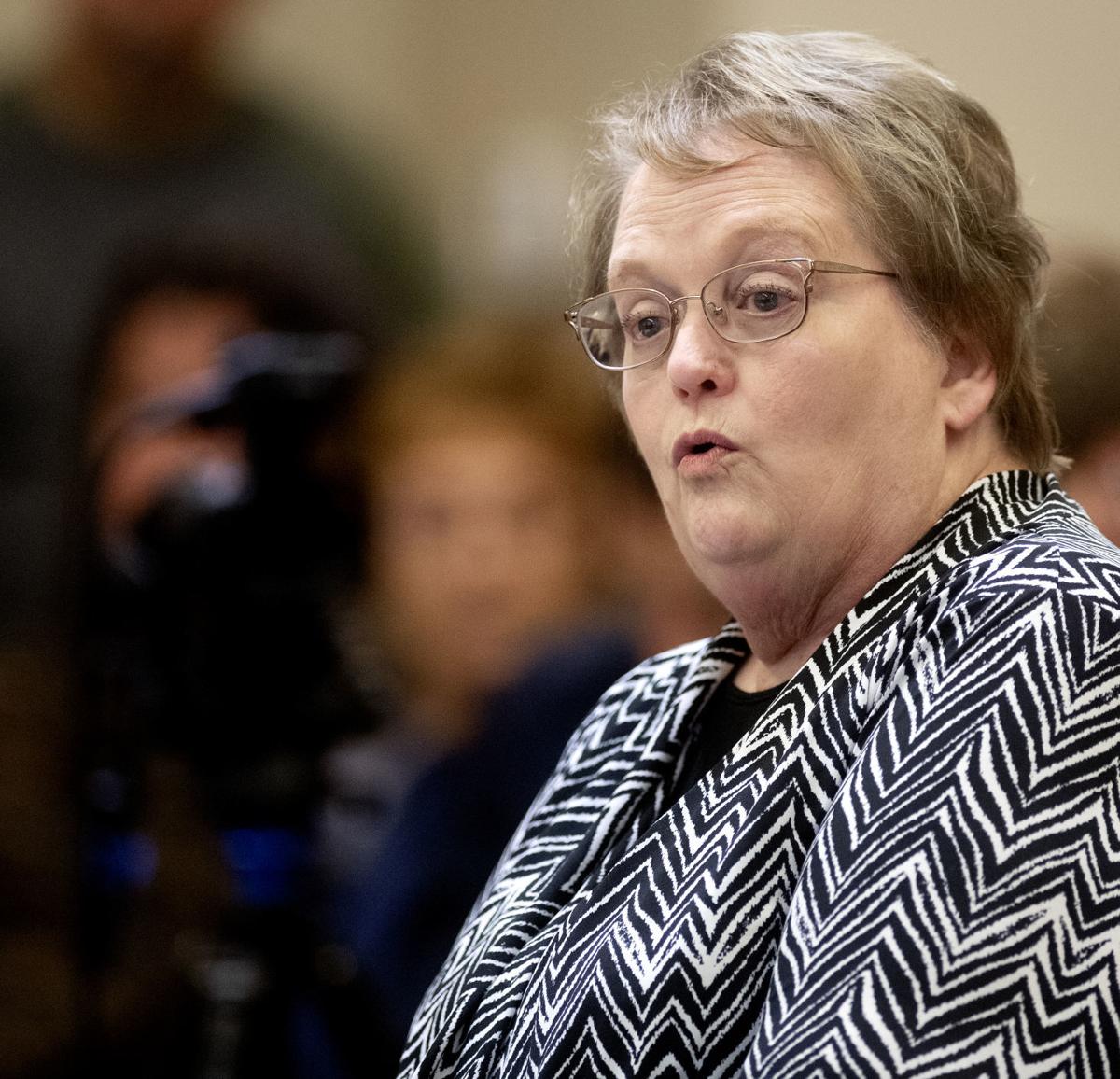 Mary Stofer, a retired employee of the Geneva Youth Rehabilitation and Treament Center, on Wednesday testifies to a legislative committee looking into conditions at the facility.

GENEVA — People testifying at a legislative hearing Wednesday painted a verbal picture of the deterioration of the Geneva Youth Rehabilitation and Treatment Center from the point of view of insiders.

The Legislature's Health and Human Services Committee came to the main street of Geneva, filling a room that held about 80 people, to hear from former center staff, town residents who have volunteered at the facility, board members and the Fillmore County sheriff. The hearing was centered on two interim studies (LR200 and LR103), introduced by Sen. John Lowe of Kearney and Sen. Dan Quick of Grand Island, aimed at staffing for the state's YRTCs and improvement of programming.

Lowe said staff turnover at Geneva as of September was at about 30%, according to HHS. It's budgeted for about 99 full-time positions, but has 31 unfilled jobs.

People testified about the demise of programming for the youths. How a small percentage of violent residents influenced the behavior of other residents. And how maintenance of the facility went downhill after the Department of Administrative Services took charge of the buildings from a local maintenance staff.

Eric Maher, communications director for the Department of Administrative Services, clarified after the hearing that the staff that performs the maintenance duties at YRTC-Geneva is made up of state employees from the Geneva community and surrounding area. When the state took over responsibility for maintenance duties of the property, it retained the same staff that was previously under HHS.

The Geneva YRTC is a state-run, campus-style correctional and rehabilitation facility for girls and young women who have been unable to succeed at less-restrictive facilities.

Fillmore County Sheriff William Burgess said the type of young women sent to Geneva has changed and a percentage of them are "very violent," creating problems for the rest of the youths. They don't want to go to school, and they want to run.

Burgess said the county needs to have the ability to charge those who commit crimes as adults, if warranted, and if found guilty, send them to the Correctional Center for Women in York. Currently, the maximum sentence is to be sent back to the YRTC, and that does not make an impression on them.

The crisis in August that started the moves and discussions about what to do with the Geneva center began with a parent calling for a welfare check of her daughter, he said. After that, some of the girls began destroying one of the cottages, and looking for fights.

"We thought we were going to have a riot, is what we thought," Burgess said. "But when five troopers showed up, they (the girls) just kind of backed off, went back to their rooms."

Even with the problems they had, Burgess said he'd like to see the girls come back to Geneva, with some changes.

"I think they (officials) need to figure out what they're going to do with these violent ones," he said. "They need their spot away from everybody else."

Those testifying agreed they would like to see the 20 youths who remain at Kearney come back to the Geneva facility.

But Health and Human Services Department CEO Dannette Smith won't commit to anything until she finishes looking at all options. The state is already spending thousands of dollars to renovate at least one of the cottages in Geneva.

"I don't know why they would have spent all that money if they weren't (coming back)," said Sen. Tom Brandt of Plymouth.

The committee toured the building Wednesday morning. The LaFlesche cottage looked great, Brandt said, and workers were doing mold mitigation in two of the other cottages, along with minor repairs.

Girls were moved from the facility to the Kearney YRTC by Smith in mid-August for their safety, she said. Problems included the physical conditions and other allegations, that are being investigated by Julie Rogers, Nebraska inspector general of child welfare.

"Relocating to Kearney provided an opportunity for us to consolidate resources so we're able to offer more consistent programming to the female youth," Smith said.

Geneva attorney Frank Heinisch, who has been on the YRTC board 39 years, said when water problems developed in the LaFlesche cottage, the only secure building, the girls with the most problems had to be integrated back into general population.

The girls with the most serious problems need to be separated from the others for six months to a year to calm down, stop rebelling and acting out, officials say. After that, they can be integrated with the rest of the girls who are working within the program and trying to improve.

"We cannot operate when we have these problem kids in our general population," he said.

Geneva Mayor Eric Kamler told the committee several problems have changed the reputation of the facility, but his desire is to figure out how those problems can be fixed to allow the center to move forward.

"Geneva wholeheartedly welcomes the YRTC here," he said, "and is eager to welcome it back into this small town that has a good quality of life and many volunteers who can help with the young women in need of better behavioral health.

"There is no doubt we have the workforce and the people right here in Geneva and the surrounding communities to not only continue the operation of the YRTC, but give it the right tools and opportunity to rebuild the center back to the pride of our community that it once was."

Omaha Sen. Sara Howard, chairwoman of the Health and Human Services Committee, said HHS has worked quickly to rehab the LaFlesche cottage, which will hold 16 girls. Right now, four of the 20 girls at Kearney are getting close to aging out.

"So if you do the math, I would think that we're getting close to a place where if she (Smith) wanted to move them to Geneva, that option would be available to her," Howard said. "We just need to make sure that she has the staff and the programming that she wants."

Smith said the girls are adjusting to life at Kearney, and increasing their participation in school and group sessions, and all have been assigned a mental health therapist.

The state contracted with Boys Town for mental health services that began Sept. 12, and medication management that began the day after. Eight youth are being served through the contract.

Inspector general: Uneasiness across Nebraska about welfare of children

One of four girls from the Youth Rehabilitation and Treatment Center in Geneva who were shuttled from Geneva to Lancaster County, back to Gene…

Four girls at the Youth Rehabilitation and Treatment Center in Kearney were found about two hours after climbing a fence and escaping early Tuesday.

Crisis conditions at Geneva center for girls being investigated

The state's residential rehabilitation and treatment center in Geneva has reached a crisis point as a result of conditions at the center, and …

A Nebraska U.S. District judge this month ruled he would allow a state inmate's lawsuit to move forward regarding injuries he received at Tecu…

Child welfare cases down in Nebraska, but some say foster care 'more hidden'

Nearly every person and agency watching over Nebraska's child welfare system can agree on one thing.

State will shift staff from Geneva to Lincoln, Kearney to work with youth rehabilitation 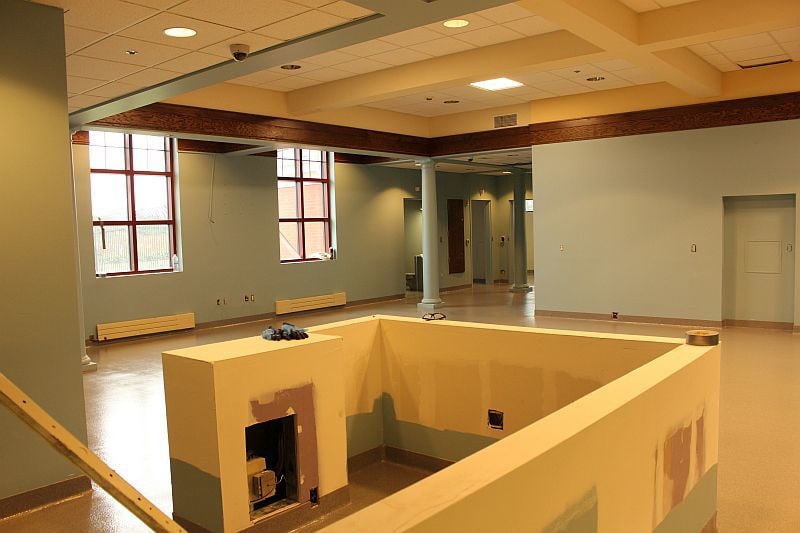 Before Wednesday's legislative hearing in Geneva, the Department of Health and Human Services provided photos of work to improve conditions at the Youth Rehabilitation and Treatment Center. 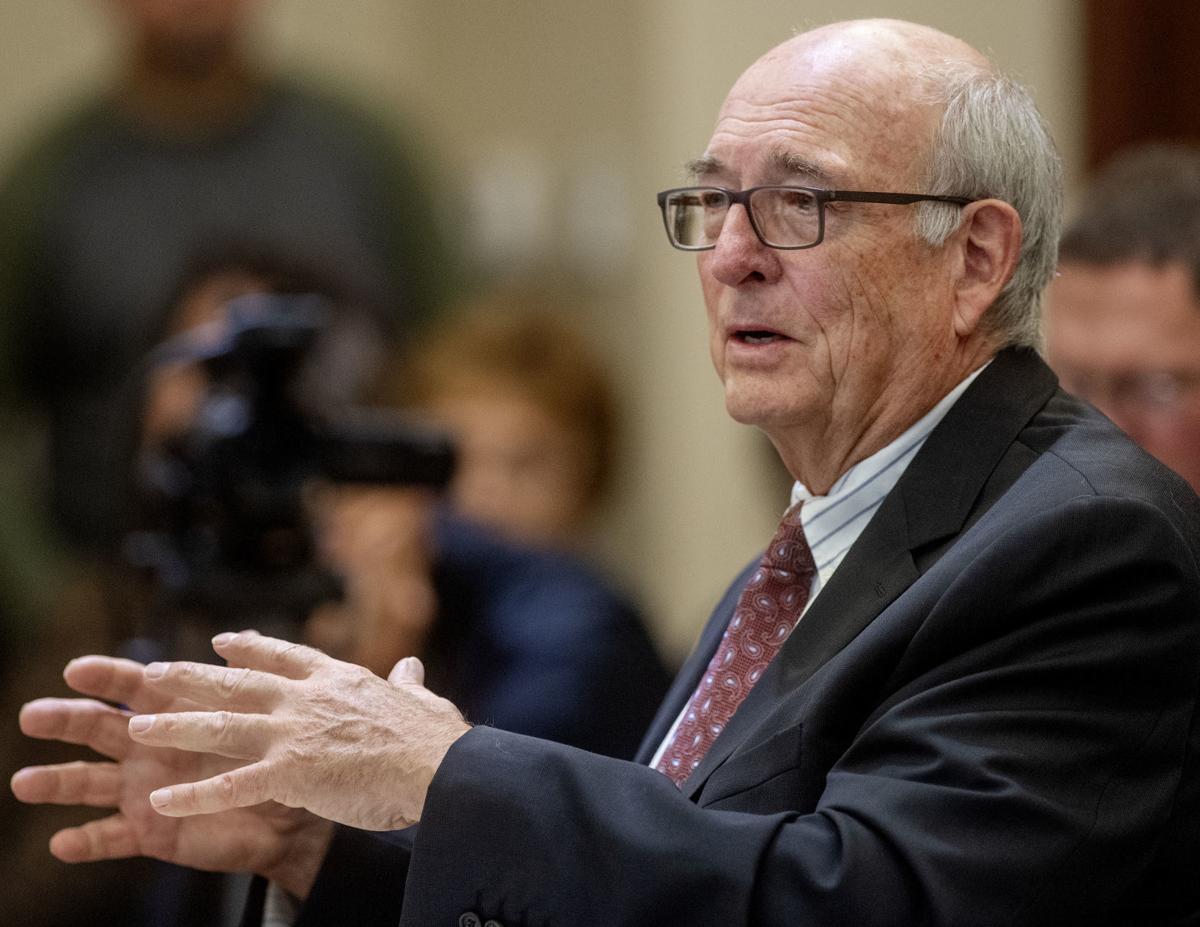 Mary Stofer, a retired employee of the Geneva Youth Rehabilitation and Treament Center, on Wednesday testifies to a legislative committee looking into conditions at the facility. 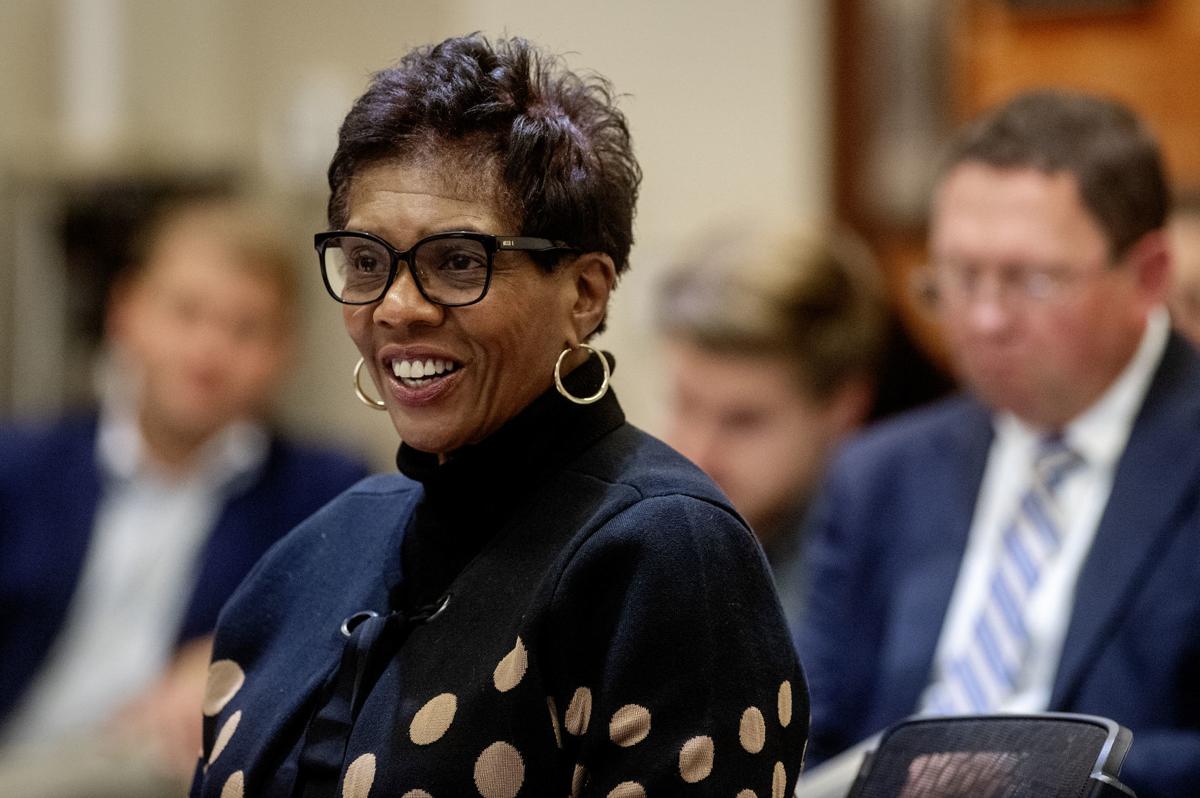