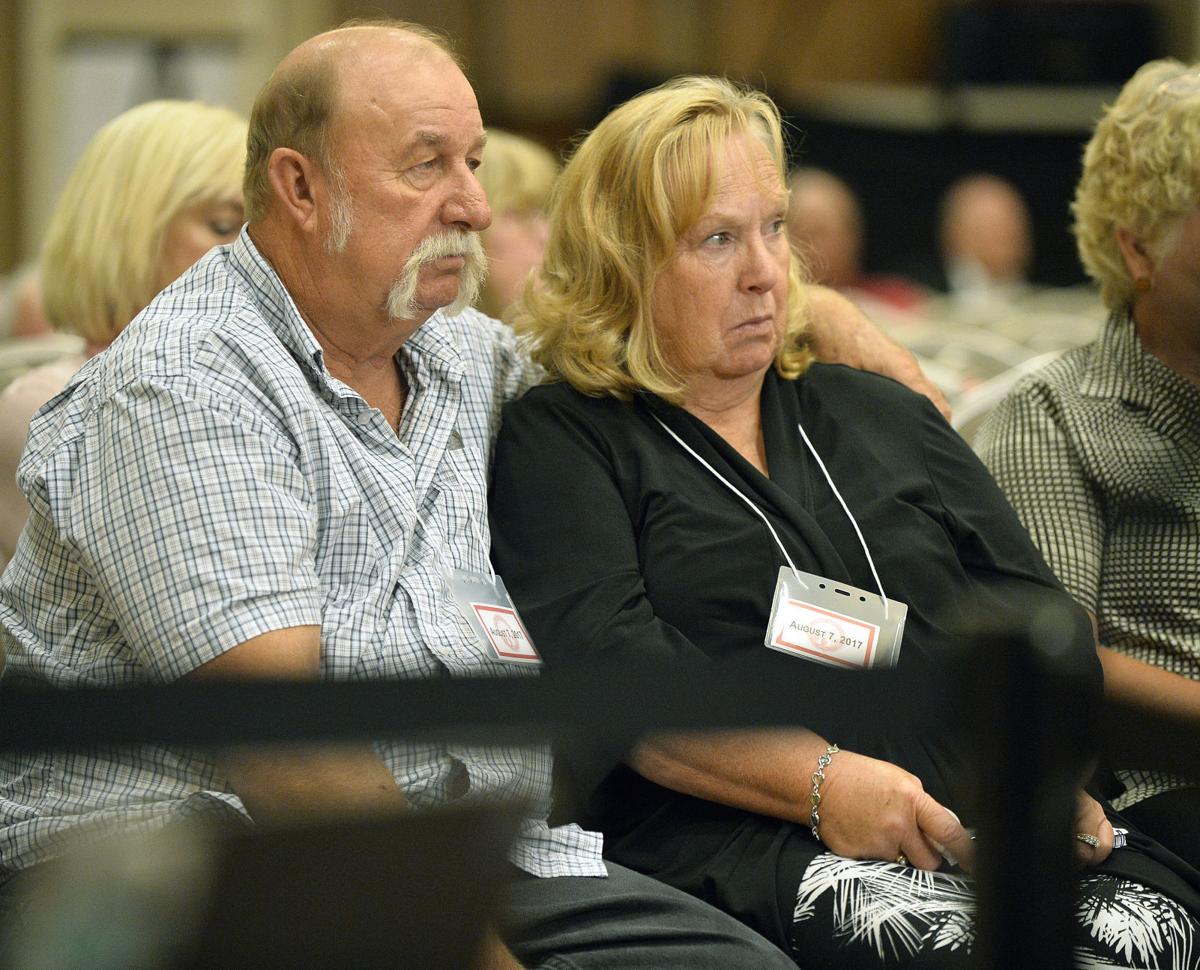 Byron and Diana Steskal, who own land in the proposed path of the Keystone XL Pipeline, listen during a Nebraska Public Service Commission hearing on the pipeline application Monday at the Lincoln Marriott Cornhusker. 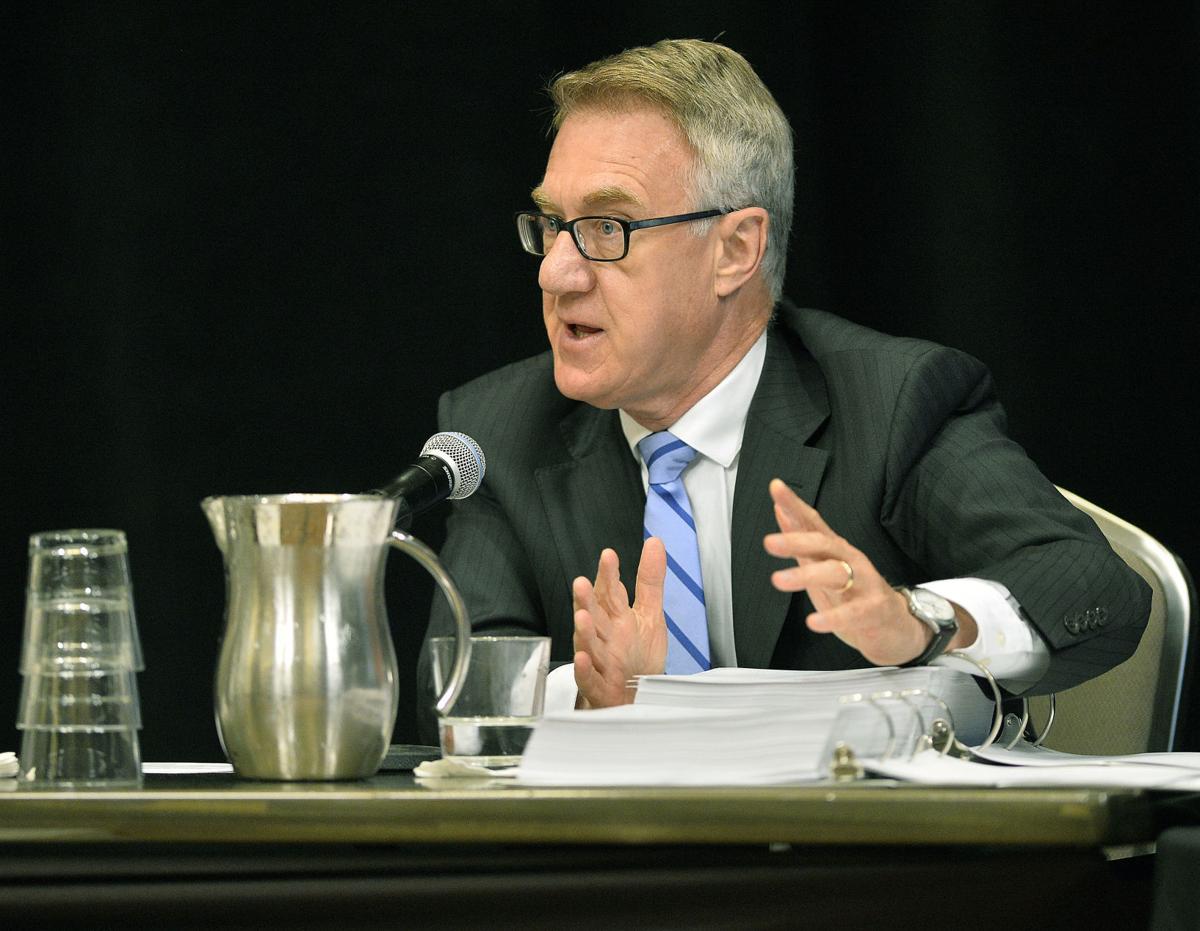 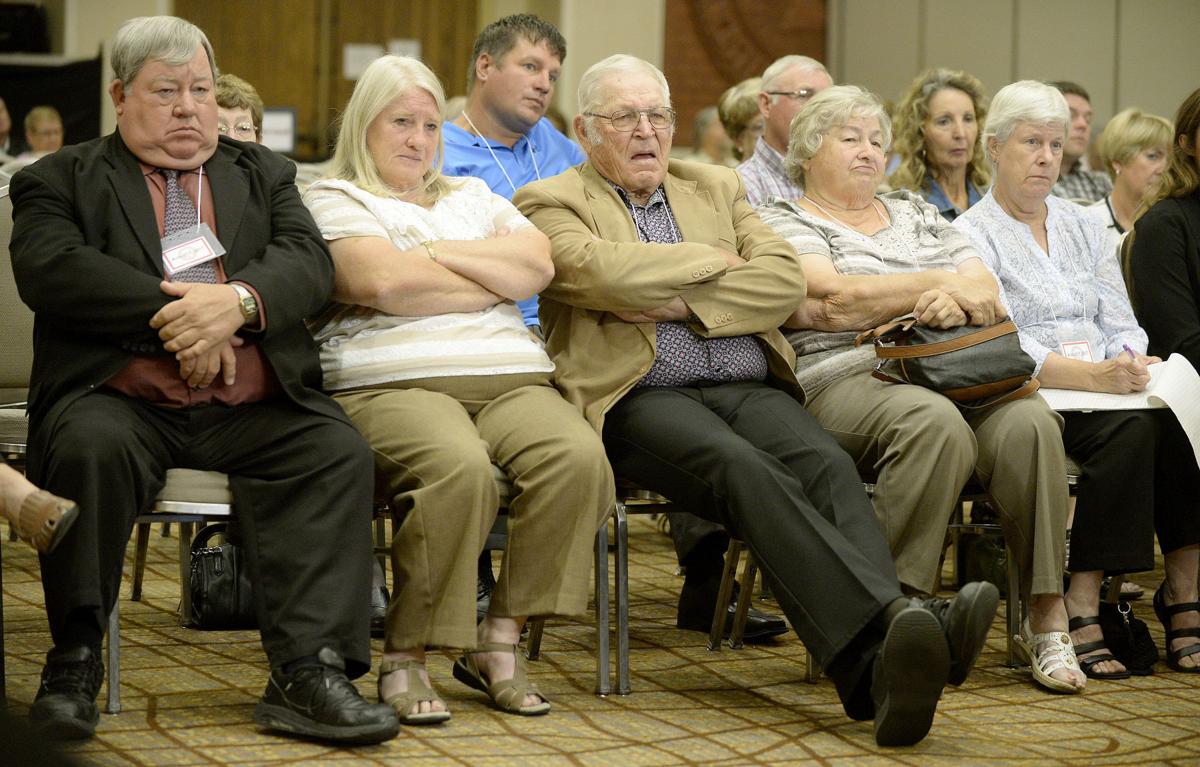 Art and Helen Tanderup (from left) Earl and Beverly Miller and Susan Dunavan, all of whom own land in the path of the proposed Keystone XL pipeline, listen during a Nebraska Public Service Commission hearing on the pipeline application Monday at the Lincoln Marriott Cornhusker Hotel. 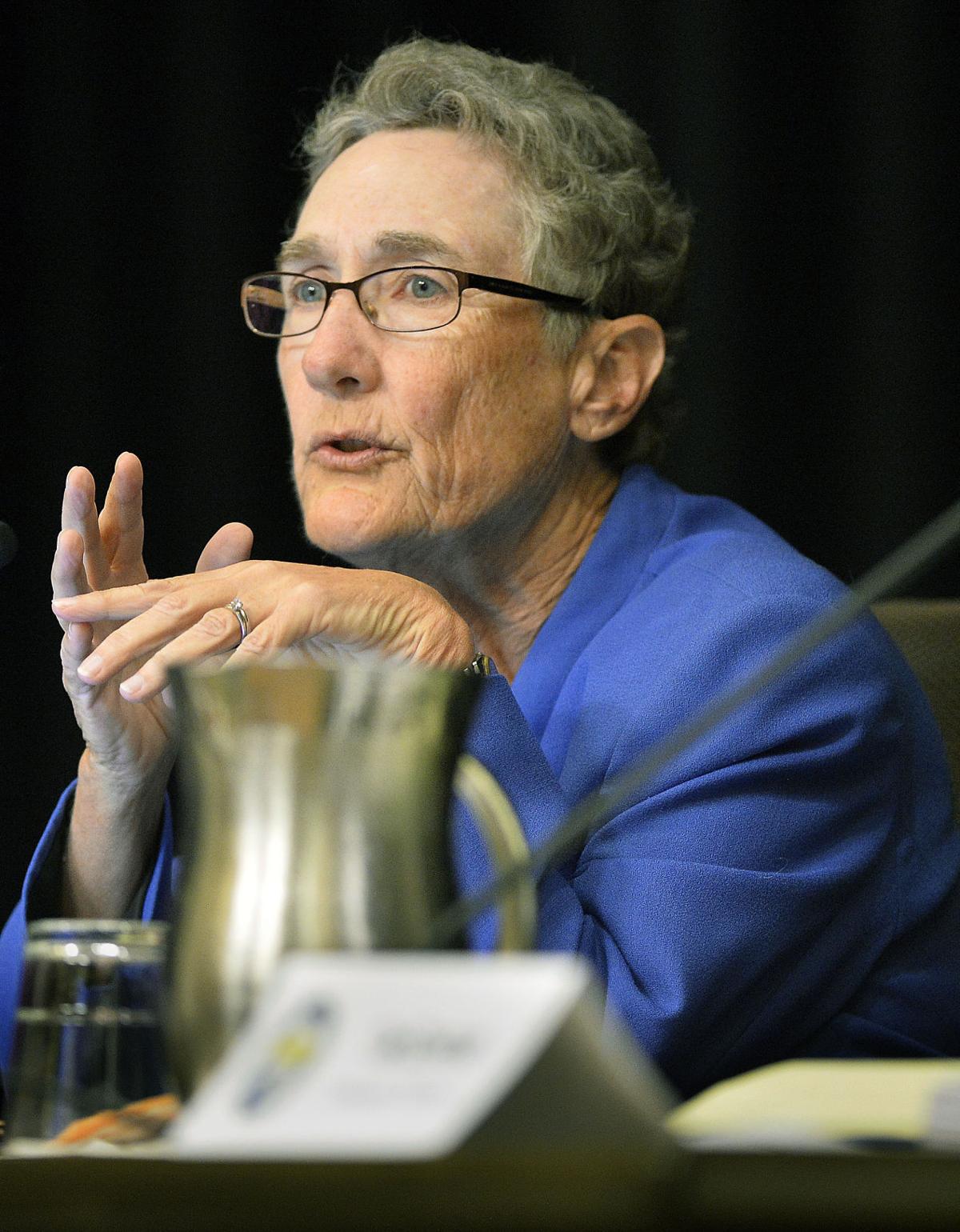 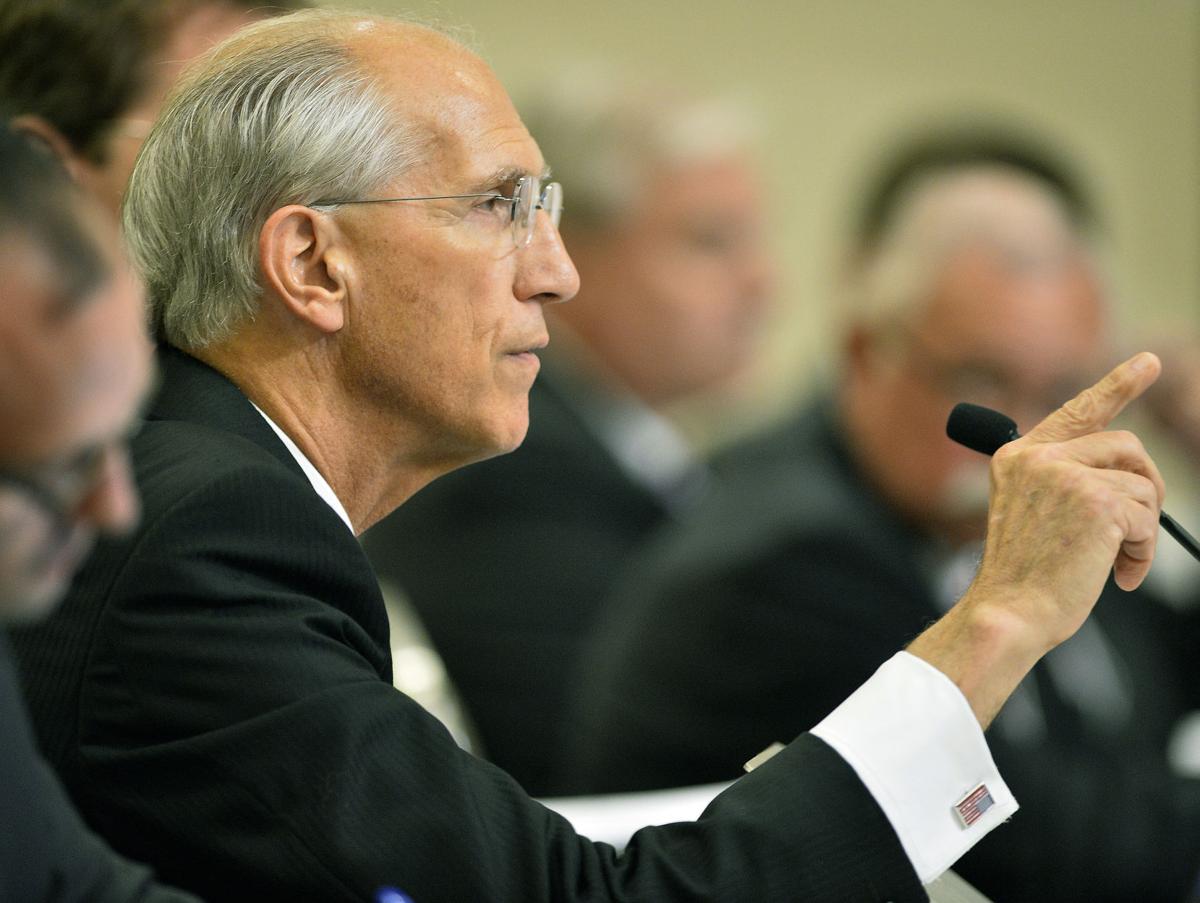 Attorneys for landowners who are trying to keep the pipeline from running under their fields quizzed representatives of pipeline builder TransCanada for about eight hours in a hearing before the Nebraska Public Service Commission at the Cornhusker Marriott Hotel.

Most of their questions focused on how TransCanada plans to avoid damaging land and other natural resources if it's allowed to build the pipeline, as well as what the company would do with the Keystone XL once it becomes unusable.

"Can you think of anything more important to a future generation of Nebraskans than this question: Do we have to clean up TransCanada’s abandoned pipeline?” asked David Domina of Omaha, an attorney for the landowners.

Tony Palmer, president of a TransCanada subsidiary that would oversee management of the pipeline if it's built, said the company won't commit to removing the Keystone XL at the end of its lifetime, nor will the company agree to set aside money in advance in case removal is required.

He did, however, dismiss a pair of landowners' commonly held fears about the pipeline: that it might eventually be used to carry water from the Ogallala Aquifer, and that TransCanada would avoid paying taxes on the pipeline by receiving state tax incentives.

Neither is true, Palmer said.

The questioning grew heated at times, with Domina and partner Brian Jorde pushing back against restrictions on what kinds of questions they were allowed to ask.

TransCanada lawyer James G. Powers of Omaha repeatedly objected to their questions as irrelevant or outside the scope of the Public Service Commission's review as allowed by state law.

Retired Judge Karen Flowers, who is presiding over the weeklong hearing under contract with the PSC, asked the attorneys more than once to stop speaking over each other.

“Let’s all try and be polite to one another," she said.

The PSC is tasked with determining whether the Keystone XL is in the public interest, but it is prohibited from taking pipeline safety into consideration. The $8 billion pipeline would stretch 1,179 miles from Hardisty, Alberta, to Steele City, Nebraska.

About 50 people attended Monday's hearing, leaving hundreds of empty seats in the two hotel ballrooms reserved for the week.

Everyone who testified Monday had already submitted written testimony in support of TransCanada's application seeking approval of the Keystone XL route. The hearing offered attorneys for intervening landowners, environmental groups, Native American tribes and labor unions, as well as members of the Public Service Commission, a chance to cross-examine TransCanada's witnesses.

Most of that time was devoted to questioning by Domina and Jorde.

The pair challenged TransCanada and its supporters on whether they can or would uphold their pledges to protect the landowners' property and the state's natural resources.

"This is not a paper that would be submitted for peer review is it?” Domina asked Goss.

Goss said his paper was written for a broader audience but used sound research methodologies.

Sandra Barnett, a TransCanada environmental specialist, acknowledged that building the pipeline could lead to soil erosion, compression or contamination.

"If those things occurred, they would not serve the public interest," she said.

Palmer, the TransCanada executive, acknowledged under questioning by Domina that the company has yet to make a final investment decision on the Keystone XL.

But outside the hearing, state Sen. Jim Smith of Papillion said he received a personal assurance from TransCanada CEO Russ Girling in a phone call Friday that the company is committed to building the pipeline.

"That's the business they're in," Smith said. "It makes no sense for them to give up on this project."

Highlights from the hearing

Monday was the first day of a weeklong hearing on whether the Keystone XL oil pipeline is in the public interest.

Most of day one was consumed by attorneys for landowners opposed to the pipeline questioning TransCanada officials on their plans.

While TransCanada executives have said the pipeline isn't a done deal, state Sen. Jim Smith of Papillion said he received a personal assurance from the company's CEO that it is committed to the project.

The hearing is expected to continue all week.

Check out photos from Sunday's Keystone XL demonstration in Lincoln.

Keystone XL is headed for another dramatic showdown. Here's what to expect.

Much has changed in 22 months.

TransCanada may decide not to build Keystone XL

TransCanada is still working to lock in more customers before it commits to building the controversial Keystone XL oil pipeline, a company exe…

HARTINGTON — Authorities say a northeast Nebraska man was killed when he was struck by a vehicle while walking across a highway.

Nothing binds the Keystone XL pipeline to its proposed route through Nebraska, TransCanada officials acknowledged Tuesday under sometimes-furi…

Bob Allpress figures just about every bird species that migrates through Nebraska flies past his ranch along the Keya Paha River.

BILLINGS, Mont. — Attorneys for the Trump administration said a federal judge has no authority to second-guess a presidential permit for the K…

Decision on Keystone XL pipeline to be announced Monday

The Nebraska Public Service Commission will announce its decision on the Keystone XL oil pipeline next week.

Byron and Diana Steskal, who own land in the proposed path of the Keystone XL Pipeline, listen during a Nebraska Public Service Commission hearing on the pipeline application Monday at the Lincoln Marriott Cornhusker.

Art and Helen Tanderup (from left) Earl and Beverly Miller and Susan Dunavan, all of whom own land in the path of the proposed Keystone XL pipeline, listen during a Nebraska Public Service Commission hearing on the pipeline application Monday at the Lincoln Marriott Cornhusker Hotel.