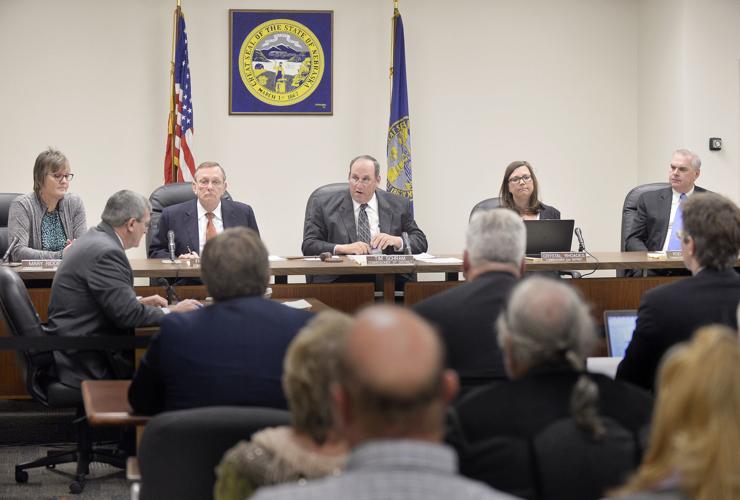 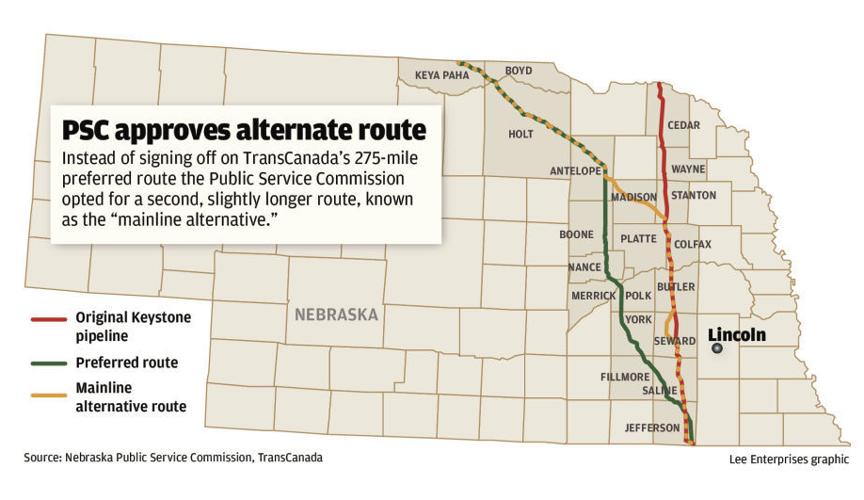 The Nebraska Public Service Commission voted unanimously Tuesday to deny TransCanada's motion to amend its application to the alternative route through the state for its proposed Keystone XL pipeline.

The decision did little to settle the battle between those working to get the pipeline built and those seeking to block it.

Those against it hope an appeal, which could result in TransCanada needing to restart the application process, will cause the company to rethink and shelve the project altogether.

Omaha attorney David Domina, who represents landowners who oppose the pipeline, said in a lot of ways it was "the best possible outcome" of the proceedings.

"We got today exactly what we wanted," he said.

Commissioners approved the pipeline last month, but not the company's preferred route through Nebraska, the one for which it had applied.

"What that means is that TransCanda is stuck with a 3-2 vote that approved a route that the company never applied for," Domina said Tuesday.

At a hearing a week ago, TransCanada's attorney, James Powers of Omaha, told commissioners they could resolve any questions over whether they overstepped jurisdiction or deprived landowners and other groups due process by allowing TransCanada to amend its application to the alternative route.

Then, the commission could issue a new final order.

But Tuesday, the Public Service Commission voted against the move, setting up an all-but-certain legal fight before the Nebraska Supreme Court that will delay the project several months, possibly a year.

And, if an appeals court finds an issue with the PSC's decision to approve an alternative route, TransCanada could find itself back at square one.

Robynn Tysver, a spokeswoman for the company, said it is going to take some time to review Tuesday's decision and determine the appropriate next step.

"Keystone XL remains a viable project with strong commercial support and we remain committed to this project," she wrote in an email. "It is important to remember that this project enjoys widespread support within the U.S. and Canadian federal governments, as well as state officials in Montana, South Dakota and Nebraska. President Trump and his administration continue to actively support Keystone XL and we expect to secure final federal permits in early 2018."

Bold Nebraska founder Jane Kleeb said TransCanada knows it's on shaky ground with the route that was approved by the PSC, but never approved by the U.S. State Department, which puts the federal permit in question.

"So now the route that TransCanada did not want — which still crosses the Ogallala aquifer and fragile Sandhills — is the route that they're technically stuck with," she said in an email.

Outside the hearing room, Ken Winston of Lincoln, attorney for the Sierra Club, said the fact that TransCanada didn't get its preferred route means now there are new landowners, environmental issues and legal issues that need to be addressed.

"It (the pipeline) never was a good idea, and it's getting to be a worse idea. We certainly hope that they would reach that conclusion, that this is not in their best interest," he said of TransCanada.

Winston said it's the Sierra Club's position that TransCanada's application should be denied on its face.

"We're moving toward much more efficient energy usage," he said. "Pipelines are no longer needed. It's a bad idea to continue to invest in fossil fuel infrastructure."

Winston said the Sierra Club has been fighting the Keystone XL from the beginning "and we will continue to fight it until it is finally stopped.”

TransCanada's 275-mile preferred route was the focus of a court-style hearing in August, but on Nov. 20, the PSC opted for a slightly longer route known as the "mainline alternative."

The pipeline would move Canadian oil bound for the U.S. Gulf Coast from Hardisty, Alberta, to a terminus at Steele City, Nebraska.

In Seward County, living with one pipeline, bracing for another

He never wanted a pipeline pulsing beneath his fields and farmyard southwest of Seward.

If TransCanada still wants to build the Keystone XL pipeline on its newly approved route through Nebraska, the company might have to go throug…

Nebraska regulators have approved TransCanada’s controversial Keystone XL pipeline, but not its preferred route through this state — raising q…

OMAHA — Federal authorities say two motel managers enslaved an Indian immigrant for more than a year, forcing him to work without pay and abus…

BILLINGS, Mont. — Federal officials must go back and review documents related to the disputed Keystone XL oil pipeline, under a Wednesday cour…

TransCanada will not have to pay $354,000 in attorney fees in cases where Nebraska landowners fought the company's attempts to use eminent dom…