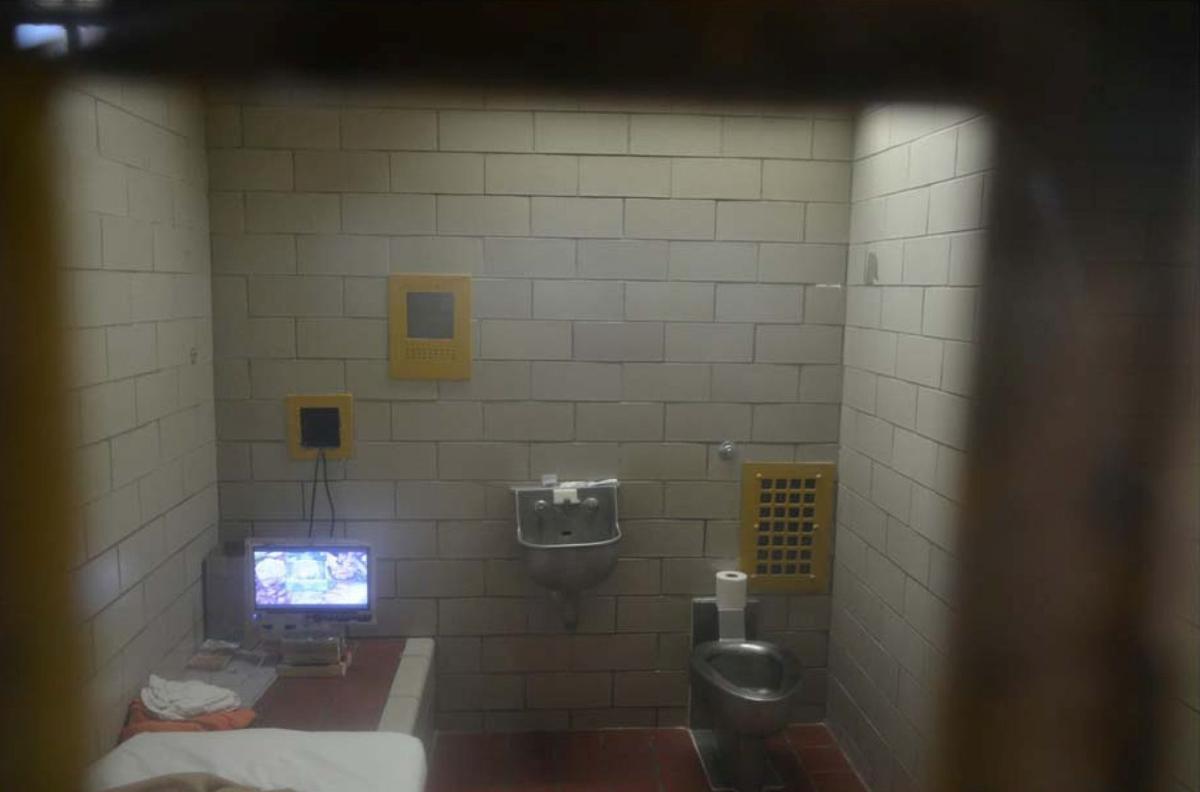 A photo taken at the Nebraska State Penitentiary by one of the experts hired by the ACLU to report on conditions at prisons, shows a windowless cell in what is called the "South Forty." The small top-most rectangle on the back wall is the hatch through which mental health and medical consultations are done. 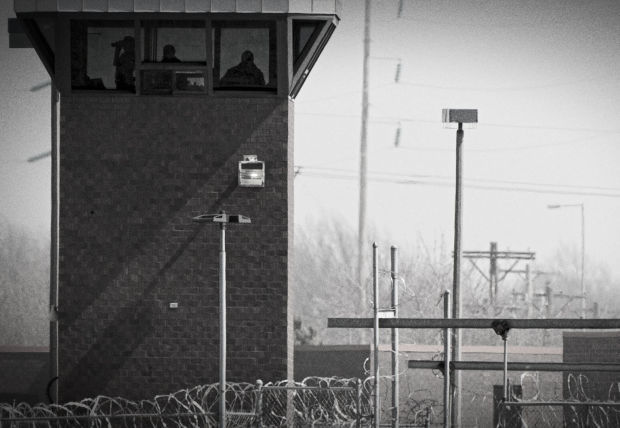 ACLU of Nebraska on Tuesday filed a motion in federal court for class-action status of a lawsuit on behalf of the thousands of men and women in the state's prisons.

It's been 18 months since 11 Nebraska prisoners sued the state Department of Correctional Services over conditions and crowding they say endanger the health, safety and lives of prisoners and staff on a daily basis.

Tuesday, the ACLU of Nebraska, which represents the prisoners, took a step to increase the reach of the complaint by filing a motion in federal court for class-action status on behalf of the thousands of men and women in the state's prisons.

To do that, the organization enlisted at least six experts with experience in treatment of prisoners with mental health, medical and dental needs and their disability rights.

One of those, Craig Haney, a social psychologist and noted expert on the psychological impact of imprisonment and prison isolation, said in his filing that Nebraska inmates subjected to excessive and inappropriate solitary confinement — especially those with mental illness — face significant risk of psychological harm.

Nebraska prisons have a far higher suicide rate than other state prison systems, he said, and records show multiple suicide attempts at the prisons in recent years.

Nabarro suffered from depression and an adjustment disorder, Haney said, and had not been seen by mental health providers for 40 days prior to his death. On a request to prison officials for aid, Nabarro had written: "I can't stand it any longer. Nobody helps."

The experts who documented their observations after interviewing prisoners and staff, touring facilities and reading documents and records, detailed in hundreds of pages problems they said extended far beyond just those 11 inmates who had filed the lawsuit.

The problems included bad policies and practices of the department, crowding, lack of appropriate access to medical, mental health and dental care, and failure to comply with the Americans with Disabilities Act.

David Fathi, director of the American Civil Liberties Union National Prison Project, said the class certification is necessary, in part, for efficiency and because prisoners come and go from custody and can't be involved in the complaint once they have been released.

"Our burden on the motion for class certification is to show that there are common issues in their case and that we're bringing a case that's not about the situation of individual people, but about statewide policies and practices that put everybody at risk of harm," Fathi said.

In addition to a general class of complainants, the lawsuit denotes subclasses for those in solitary confinement or those who have disabilities. The affidavits brought by the experts are "quite scathing," Fathi said.

"This case is an attempt to fix a profoundly broken prison system," he said. "This is a system that is in perpetual crisis, that poses an imminent risk of injury or death, not only to prisoners but to people who work in the prisons."

"It is important to remember that these remain allegations and the Attorney General’s Office looks forward to showing the court the quality of care provided at NDCS," he said.

The experts gave examples of what they observed as dangerous conditions:

* While all restrictive housing units appear capable of having harmful impacts on prisoners, Haney said, the "South Forty" control unit at the State Penitentiary is more toxic than others. He described conditions in the unit as shocking and the plight of many of those prisoners are "truly dire." The cells are small, dirty, essentially windowless and infested with insects and rodents. Staff must navigate through a utility chase, or "tunnel," between units and peer through an opening in the rear of individual cells to communicate with prisoners and assess their health needs.

Haney interviewed several dozen prisoners at multiple facilities, some who spent months, even years, in restricted housing and who described enforced idleness and inactivity, oppressive security and surveillance and starkly deprived conditions that can create cognitive, emotional and behavioral impairments. Those damages can be permanent and life-threatening, he said.

* Dentist Jay D. Shulman reported allegations of inadequate policies, procedures and staffing in the dental department that result in consistently inadequate care. There is a one-year quarantine during which prisoners are not eligible to receive treatment for dental disease until the conditions cause pain. There is a two-year restriction from receiving dentures, even for those who have pain and discomfort in chewing. An available waiver process is "highly problematic," he said, because the basis for approving such a waiver is not stated.

* Eldon Vail, formerly with the Washington State Department of Corrections, described the "two-headed monster" of overcrowding and understaffing that leads to over-reliance on solitary confinement. In spite of a stated reform of restricted housing policies, the practice has increased rather than decreased, he said.

And the practice of putting two prisoners together in restricted housing cells is dangerous, he said, as shown by the murder of Terry Berry by his cellmate, Patrick Schroeder. Vail said Chief of Operations Diane Sabatka-Rine has said she didn't believe double-celling, in and of itself, impacts safety or the mental well-being of individuals. Corrections Director Scott Frakes said double-bunking in restrictive housing can be as safe as in general population.

* Dr. Pablo Stewart, a psychiatrist, declared in his filing the systems for prescribing and adjusting medication, and for detecting and treating dangerous side effects of powerful psychotropic medication, are not functioning at the level needed to prevent serious harm and death. Prisoners taking powerful psychotropic drugs are not properly monitored for side effects, he said.

* Dr. Marc Stern found what he called improper use of nursing staff; inappropriate use of inmate "porters," who provide direct clinical care and are given access to other prisoners’ confidential medical records; poor clinical decision-making and practice by health care professionals; and failure to have a reliable system in place to ensure medical orders are followed.

Poor decisions could in some cases be life-threatening, Stern said. One patient at the women's correctional center at York who was recommended for additional X-rays for an abnormal and concerning mammogram didn't get the followup care for six months, at which time she was diagnosed with breast cancer.

* Margo Schlanger, an expert in law, policies and procedures affecting prisoners with disabilities, reported the department has no written policies governing the provision of assistive devices beyond a cursory reference they will be provided subject to “medical necessity, safety, and security." The department does not inform prisoners of their rights under the Americans with Disabilities Act or about how to access services, she said.

ACLU of Nebraska experts filed opinions and observations on the condition of Nebraska prisons after touring corrections facilities, interviewing prisoners and staff, reviewing documents and prisoner records. Several have served as expert witnesses in similar cases.

* Craig Haney, psychology professor at the University of California, Santa Cruz, specialist in psychology and the law, the psychological effects of imprisonment and the nature and consequences of solitary or isolated confinement.

* Jay D. Shulman, a dentist with 47 years' experience in correctional dentistry with clinical, management and academic experience. He has had careers in the military and dental education and is certified by the American Board of Dental Public Health.

* Eldon Vail, a former correctional administrator with 35 years of experience working in and administering adult institutions. He served seven years as the deputy secretary for the Washington State Department of Corrections, responsible for the operation of prisons and community corrections. He came out of retirement in 2007 to serve as Secretary of the Department of Corrections there for four years.

* Dr. Pablo Stewart, board-certified psychiatrist and until last June a professor in the Department of Psychiatry, University of California, San Francisco, and now at the University of Hawaii. He has more than 30 years experience in correctional mental health care, including as an expert in class-action cases challenging the provision of mental health care to prisoners.

* Dr. Marc Stern, a board certified internist specializing in correctional health care. He has managed health care operations and practiced health care in multiple correctional settings. Most recently, he was the assistant secretary of health care for the Washington State Department of Corrections.

* Margo Schlanger, University of Michigan law professor who served two years as officer of civil rights and civil liberties at the U.S. Department of Homeland Security. She founded and served as director of the Civil Rights Litigation Clearinghouse. And she teaches and advises forensic psychiatrists in training.

Senators are making another run at cracking the prison overcrowding problems in Nebraska with a stack of bills being introduced this week.

Nebraska's Department of Correctional Services and Board of Parole on Monday asked the U.S. District Court of Nebraska to partially dismiss a …

Frakes, Lathrop at odds over need for benchmarks to reduce prison overcrowding

Judiciary Committee Chairman Steve Lathrop, who has expressed abundant concern about the condition of the state's prisons since returning to t…

Prison reform package of bills, including cellphones in prisons, goes to Legislature for debate

A prison reform bill advanced Friday from the Judiciary Committee, with six measures gathered into one omnibus bill that would address such is…

The state answered an ACLU of Nebraska legal request for class-action status of its lawsuit against Nebraska prisons this week, saying no plai…

As a federal lawsuit filed by the ACLU of Nebraska against the Nebraska Department of Correctional Services winds through the courts, the ACLU…

A photo taken at the Nebraska State Penitentiary by one of the experts hired by the ACLU to report on conditions at prisons, shows a windowless cell in what is called the "South Forty." The small top-most rectangle on the back wall is the hatch through which mental health and medical consultations are done.

ACLU of Nebraska on Tuesday filed a motion in federal court for class-action status of a lawsuit on behalf of the thousands of men and women in the state's prisons.