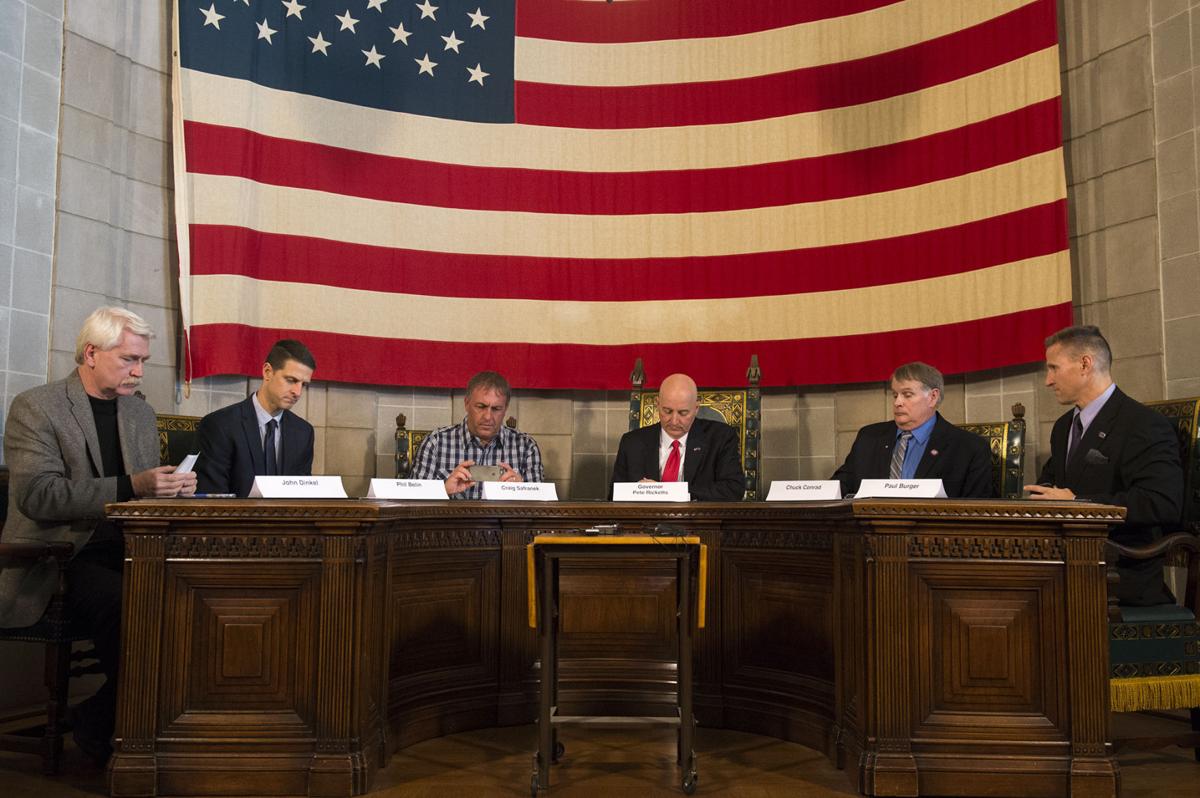 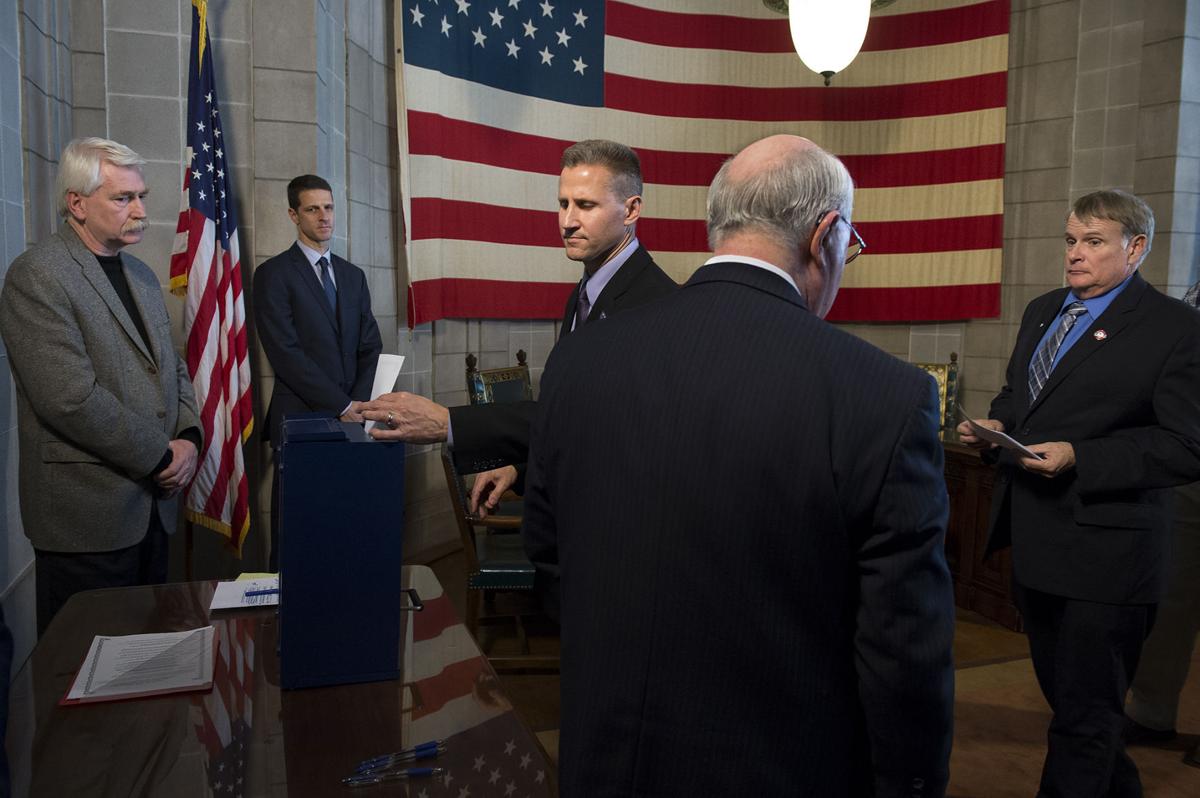 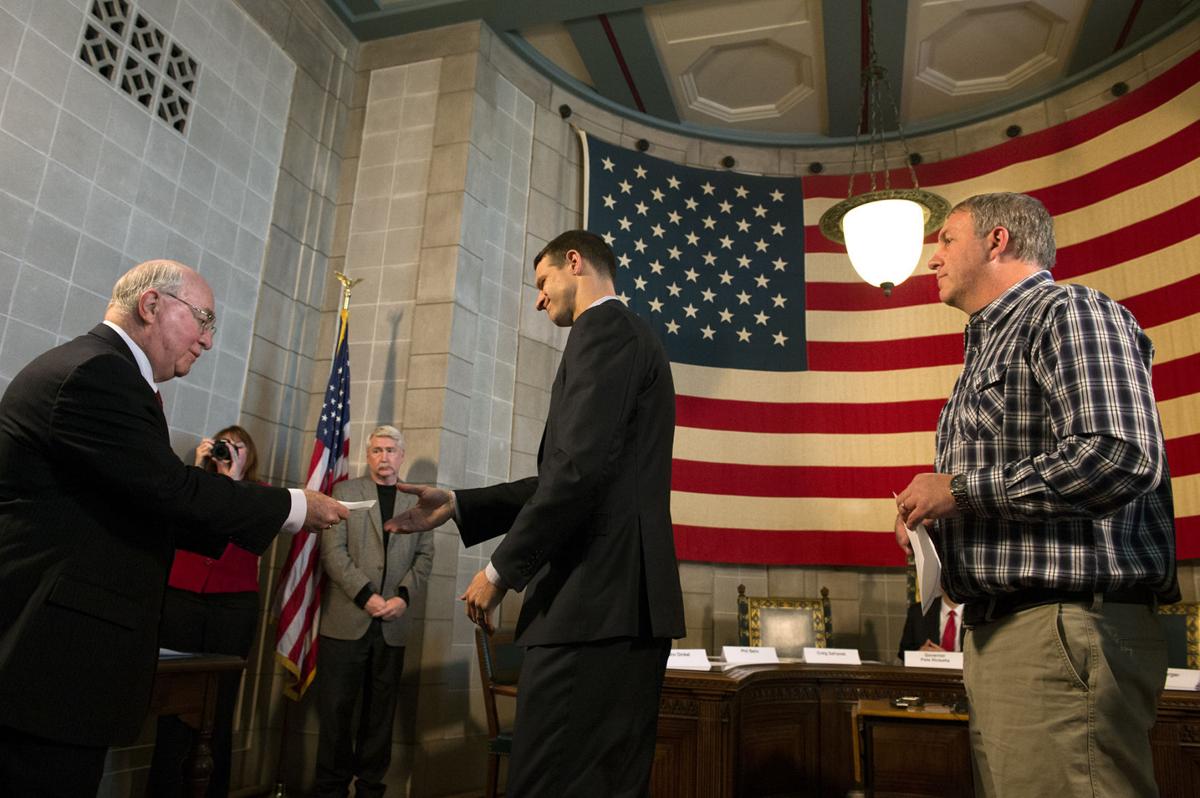 Nebraska Secretary of State John Gale (left) checks the ballot of presidential elector Phil Belin as fellow elector Craig Safranek waits to cast his ballot for vice president on Monday at the Capitol.

Donald Trump had nothing to fear, here or across the country.

As expected, the five Electoral College members from Nebraska cast ballots for Trump on Monday, joining 299 counterparts in other states to help secure victory for the nation's president-elect.

The procedural step — in Nebraska, electors are bound by law based on the public vote — ended an unusually tumultuous post-election period in which electors reported a deluge of letters, emails and phone calls from people urging them to ditch Trump.

Those efforts were futile. Only a handful of Republican electors nationwide supported candidates other than Trump, the party's nominee.

"I think he's doing a fantastic job," said John Dinkel of Norfolk, the elector for Nebraska's 1st Congressional District, which includes Lincoln. "I just hope and pray that his detractors will give him a chance, and that for the sake of America that they will come around."

Earlier, about 40 protesters had gathered in the Capitol Rotunda in opposition to Trump, with signs that said "Don't Let Russia Trump America" and "Elect the Real Winner." Some later crowded into the governor's hearing room during a news conference on an unrelated topic.

Five people spoke during a public comment period once the Electoral College meeting began; all urged the electors to delay the vote or support someone else for president.

"Anyone else," said Korynne Bolt of Lincoln.

Bolt's brother has cancer, and she fears his health insurance coverage might get worse or disappear altogether once Trump becomes president, should he use the Oval Office to approve a bill to repeal Obamacare.

"This is not a matter of policy or party lines, it's very personal," she said.

Others asked electors to consider developments since the election, raising concerns about Trump's cabinet picks and Russian influence on the vote. One noted that Democrat Hillary Clinton, not Trump, had won the nationwide popular vote.

Mark Loscutoff of Omaha said he hoped to change electors' minds, however, "If I had changed any minds I would have been shocked."

Gov. Pete Ricketts presided as, one by one, electors cast ballots for Trump and then for Vice President-elect Mike Pence. The votes were verified by Secretary of State John Gale.

Elector Craig Safranek of Merna said later that he was "just representing the people. They voted for Trump."

Sharon and Joe Conrad sat in the front row while their son, elector Chuck Conrad of Hastings, cast his ballot for Trump.

"I think it's quite an honor for him," said Sharon Conrad, 79. She hoped the vote would bring an end to what she called "the B.S." — stacks of letters, sometimes hundreds in a single day, mostly from other states, which kept her son's mail carrier busy in recent weeks.

"Between that and Christmas cards it's been quite the sorting process," said Marie Belin, the wife of another elector, Phil Belin of Omaha.

"It's been an education," Marie Belin said of the election. "We've been teaching them about the Constitution, so it's fun to see this Article in real life."

Trump needed 270 electoral votes to win. He got 304, including all five awarded by Nebraska because he won the statewide popular vote and claimed a majority in all three of the state's congressional districts.

Dinkel, the elector from Norfolk, said he would have supported Trump even without the law. He supported Trump after Sen. Marco Rubio dropped out of the race in March, and cast a vote for Trump at the Republican National Convention in July.

He plans to attend Trump's inauguration Jan. 20 having aided the president-elect again.

A couple of weeks to go before the 2017 Legislature begins a long winter's journey that won't be completed until a warm morning in early June.

Congressman-elect Don Bacon says he'll "not be a blank check for anybody or any party" when he succeeds Rep. Brad Ashford in the House next mo…

The number of people gathered at the west steps of the Nebraska State Capitol Sunday afternoon climbed down to about 30 people, after having a…

Nebraska Secretary of State John Gale (left) checks the ballot of presidential elector Phil Belin as fellow elector Craig Safranek waits to cast his ballot for vice president on Monday at the Capitol.