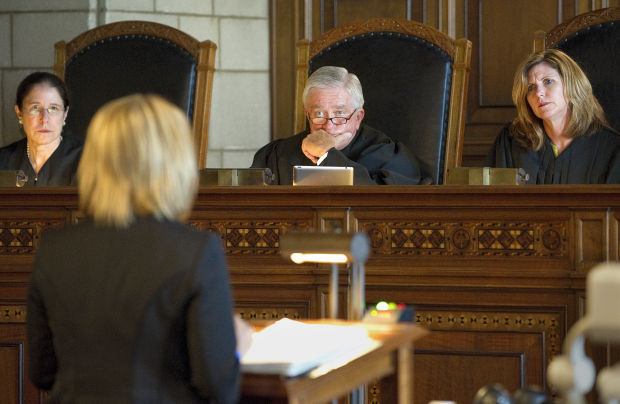 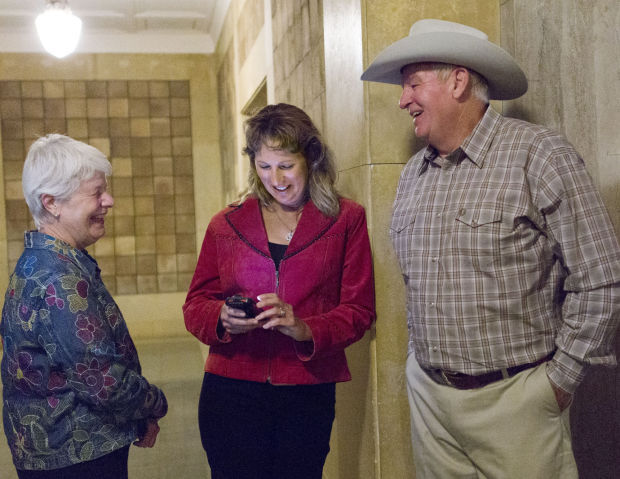 Susan Dunavan (left), Susan Straka and Randy Thompson stand outside the Nebraska Supreme Court on Friday. The three landowners filed suit challenging the constitutionality of the route of the Keystone XL pipeline through the state. 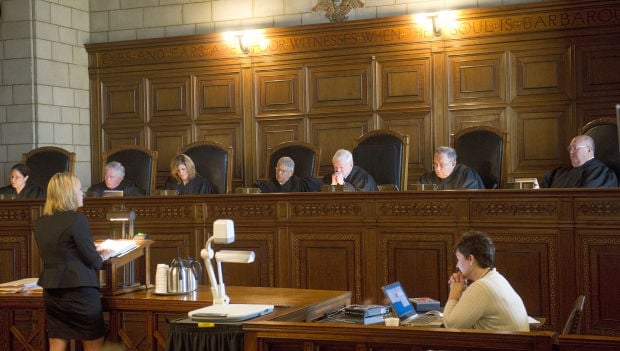 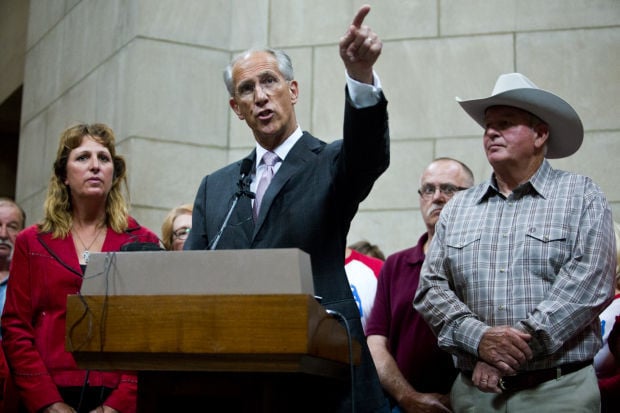 Attorney Dave Domina gestures as he speaks at a news conference in Lincoln. 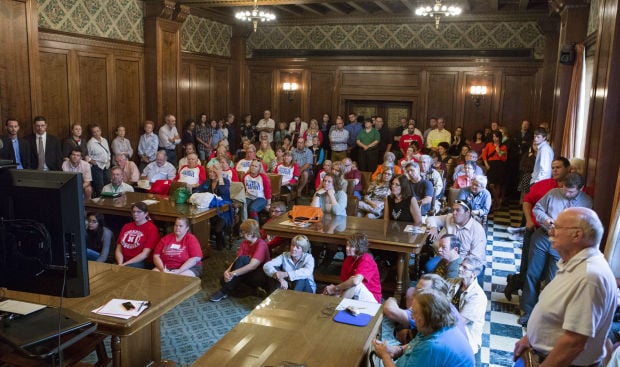 A crowd watches arguments before the Nebraska Supreme Court in a room down the hall from the courtroom. 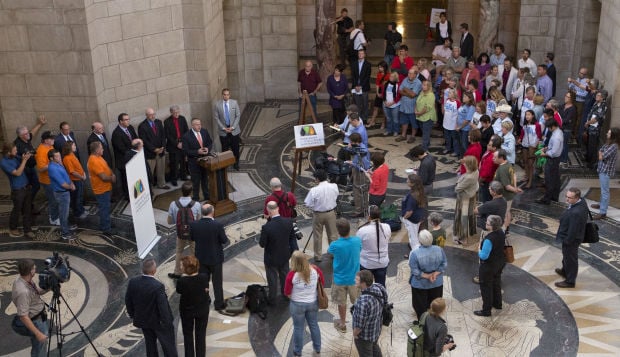 Before the Nebraska Supreme Court heard arguments challenging the state's major pipeline siting bill, pro-Keystone XL pipeline supporters held a press conference in the rotunda of the Capitol on Friday.

Nebraska Supreme Court judges peppered attorneys with questions Friday during 30 minutes of oral arguments on a constitutional challenge to a 2012 statute giving the governor authority to approve the path of the proposed Keystone XL pipeline through Nebraska.

The case has halted the presidential permitting process for the $5.4 billion pipeline, as opponents and proponents await word from the seven judges on whether a decision by a lower court declaring unconstitutional the 2012 statute (LB1161) that gave the governor authority to approve the route should stand.

Deputy Attorney General Katherine Spohn, who argued the state’s appeal, had barely gotten through her introduction and turned to the merits of the case when the first question came.

“Just a minute,” Judge William Connolly said. “On the standing, didn't we in Cunningham versus Exon carve out an exception to the standing rule if it concerns a matter of great concern?”

Spohn agreed the high court had previously allowed taxpayers to challenge state statutes but said that shouldn't apply in this case.

The state’s appeal of Thompson v. Heineman hinges on two issues, including the standing of the three landowners who brought the suit.

Spohn argued that Randy Thompson and the other landowners lack the legal right to challenge the law.

On the other side, the issue is whether the legislation violated the state constitution by allowing TransCanada, the company developing the Keystone XL pipeline, to bypass the state’s Public Service Commission and have its route reviewed by the Nebraska Department of Environmental Quality and approved by Gov. Dave Heineman.

Those two issues dominated the oral arguments before the court. Judges barely touched on additional topics other than to ask the landowners’ attorney, Dave Domina, which of his arguments that failed to sway Lancaster County District Judge Stephanie Stacy he believed to be the strongest.

His clients, Randy Thompson, Susan Straka and Susan Dunavan, watched from the back of a packed courtroom while more than 100 other pipeline opponents filled an overflow room or stood in a hallway of the State Capitol.

During Friday's hearing, judges almost immediately focused on the issue of standing.

Domina, in a news conference following the hearing, said their questions showed that the judges are leaning toward upholding his clients' right to challenge.

His clients, he said, meet the requirements of traditional standing as landowners whose property was or is in the path of the pipeline route. Since TransCanada agreed to move the route during negotiations on the state’s Major Oil Pipeline Siting Act, only Dunavan’s 80 acres of grassland prairie in York County are believed to still be on the route.

The landowners also qualify to bring suit under an exemption to traditional standing that allows taxpayers to challenge questionable laws, Domina said.

Meeting separately with reporters, Nebraska Attorney General Jon Bruning downplayed the issue of standing. Even if the judges find these landowners don’t meet the legal requirements to bring the lawsuit, he said, opponents of the pipeline will find someone else to bring a new suit.

“The crux of this case is the Legislature’s decision to define common carriers, as to pipelines, as intrastate in nature,” Bruning said. “That is really what this comes down to and what we hope the Supreme Court will consider.”

By definition, common carriers move people or things for a price, like a taxicab or a train. The Nebraska Constitution assigns regulation of common carriers to the five-member Nebraska Public Service Commission, which is elected by districts.

In appealing to the Supreme Court, the state argued that Stacy erred when she ruled, based on past precedent, that pipelines are common carriers and the state constitution says only the Legislature and Public Service Commission can regulate them.

Spohn pointed specifically to a 1963 law that defines common carriers relating to pipelines as only operating within the state’s boundaries. The Keystone XL will carry oil across several states, so turning over approval of their routes to the governor doesn’t violate the state constitution, she said.

It’s up to the United States Congress to regulate commerce between states, Spohn argued.

Domina, in turn, argued that federal authorities regulate only pipeline safety and that routing of pipelines is left to the states.

In Nebraska, he said, that authority belongs with the Public Service Commission, which has a process of judicial review built in and requires gathering evidence and proof of meeting legal requirements before a permit is granted.

“The process is thoughtful and reflective and evidence-driven and not political,” Domina said. “The opposite is true of the gubernatorial route -- no standards, no hearing, no oath, no required findings, no judicial review. Absolutely no due process.”

TransCanada needs a presidential permit, which it first applied for six years ago, to build across the United State’s northern border. The U.S. State Department has put the permitting process on hold, saying federal officials need to know whether the Nebraska route is good before it can proceed.

The state Supreme Court sets its own schedule for deciding cases, but watchers of the court don’t expect a ruling until after the November elections, possibly even next year.

Supporters of the Keystone XL said the northern leg of the 36-inch pipeline — from Hardisty, Alberta, to Steele City on the Nebraska-Kansas border — will be built regardless of the outcome of the case. The Supreme Court decision will simply determine whether it’s sooner or later.

“TransCanada has remained steadfast in saying that they’re going to see this project through, and they’re going to get the construction done,” said Michael Whatley, vice president of the energy industry mouthpiece Consumer Energy Alliance and a partner in the Washington, D.C., lobbying firm HBW Resources.

TransCanada spokesman Shawn Howard said the company remains focused on the final stage of the presidential permit review and the central question it addresses: whether the Keystone XL pipeline is in America’s national interest.

“We continue to believe that it is and a strong majority of Americans want to see Keystone XL built, too. Keystone XL will help improve American energy security, put more than 9,000 American laborers and tradespeople to work, modernize America's energy infrastructure and transport a critical and needed product to U.S. refineries that are actively looking for this oil to create products we rely on every day,” Howard said.

Supporters say the pipeline will bring with it new jobs, additional property tax dollars and crude oil from a friendly trading partner. Labor unions have been strong supporters of the project.

“This is literally going to put together, immediately, 1,000 workers. Union workers, by the way, getting paid top dollar working seven days a week, 12 hours a day. It’s going to be a tremendous economic boom for the building and construction trades working on that project,” said Terry Moore, president of the Omaha Federation of Labor, AFL-CIO.

Every delay means another day where 830,000 barrels of crude oil, mostly from Canada’s tar sands and a little from the Bakken Shale in Montana, are not flowing through the pipe to refineries along the U.S. Gulf Coast and making the United States more energy secure, Moore said.

And, he said, the environmental impact study of the Keystone XL released by the U.S. State Department earlier this year shows transporting oil by pipeline is safer and more efficient than rail, barge or truck.

Jane Kleeb, head of Bold Nebraska, pledged she and a broad coalition of property rights, environmental and Indian activists would fight the project at every step and every turn.

“We have more than 100 landowners who will never negotiate with TransCanada,” Kleeb said.

Opponents of the pipeline say its construction would threaten groundwater, as well as accelerate climate change.

Many landowners have said the terms being offered in easements don’t pass muster and want provisions added to protect their rights and liabilities, as well as require TransCanada to remove the pipe once it has outlived its usefulness.

About 75 Nebraskans, as well as people from elsewhere in the Midwest, congregated in Lincoln Monday night to participate in a Keystone XL pipe…

Shannon Graves sat before the York County Board of Commissioners and held up a glossy postcard, the kind that tends to fill up mailboxes durin…

Check out the scene inside and out of the courtroom Friday during oral arguments.

The nearly six-year debate over development of the Keystone XL pipeline reaches another crossroads on Friday.

A look at the key dates in the project to build the Keystone XL pipeline.

Putting the Bold in Nebraska: Pipeline gave progressive group a cause

When Jane Kleeb started the small advocacy group she named Bold Nebraska in March 2010, the Southern Florida transplant knew nothing of the Keystone XL pipeline or the Canadian company that wants to build it across the American heartland.

Susan Dunavan (left), Susan Straka and Randy Thompson stand outside the Nebraska Supreme Court on Friday. The three landowners filed suit challenging the constitutionality of the route of the Keystone XL pipeline through the state.

Attorney Dave Domina gestures as he speaks at a news conference in Lincoln.

A crowd watches arguments before the Nebraska Supreme Court in a room down the hall from the courtroom.

Before the Nebraska Supreme Court heard arguments challenging the state's major pipeline siting bill, pro-Keystone XL pipeline supporters held a press conference in the rotunda of the Capitol on Friday.