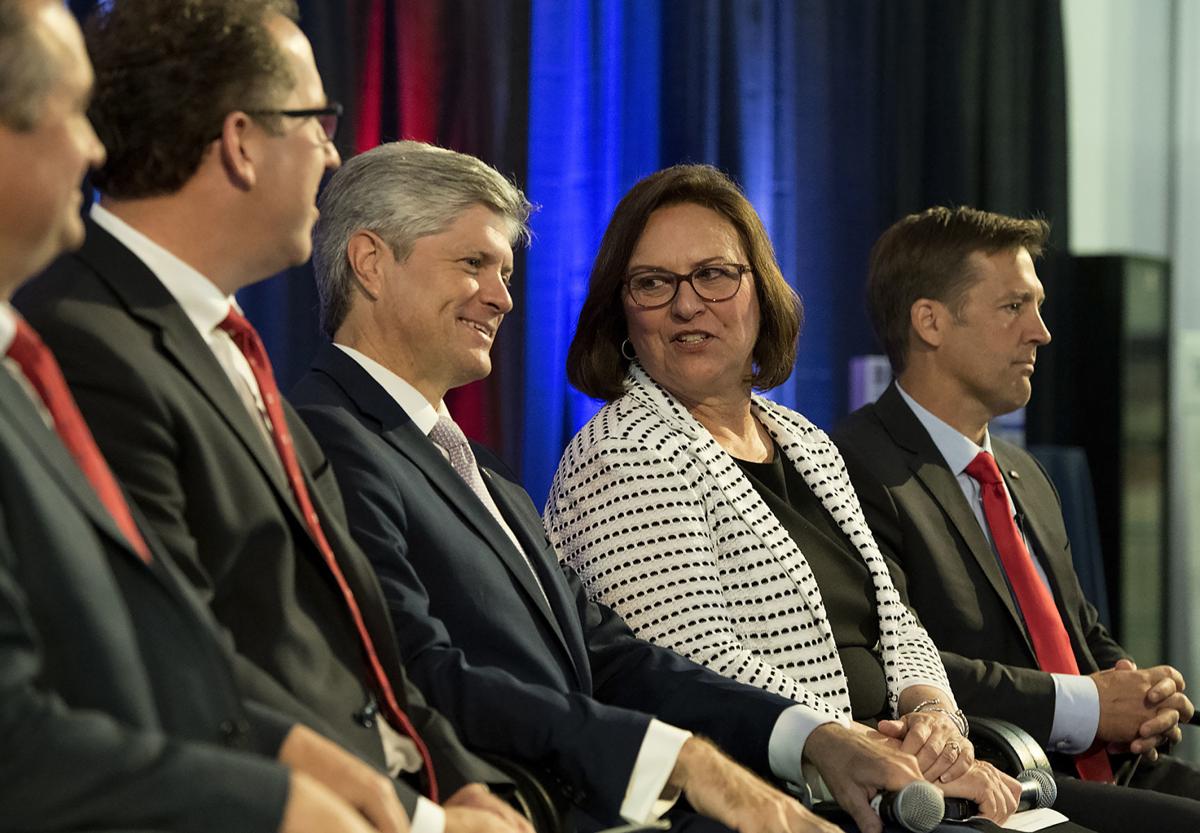 Nebraska Reps. Don Bacon, Adrian Smith and Jeff Fortenberry and Sens. Deb Fischer and Ben Sasse (from left) await their turns to speak at the Federal Legislative Summit on Thursday at the Strategic Air Command and Aerospace Museum. 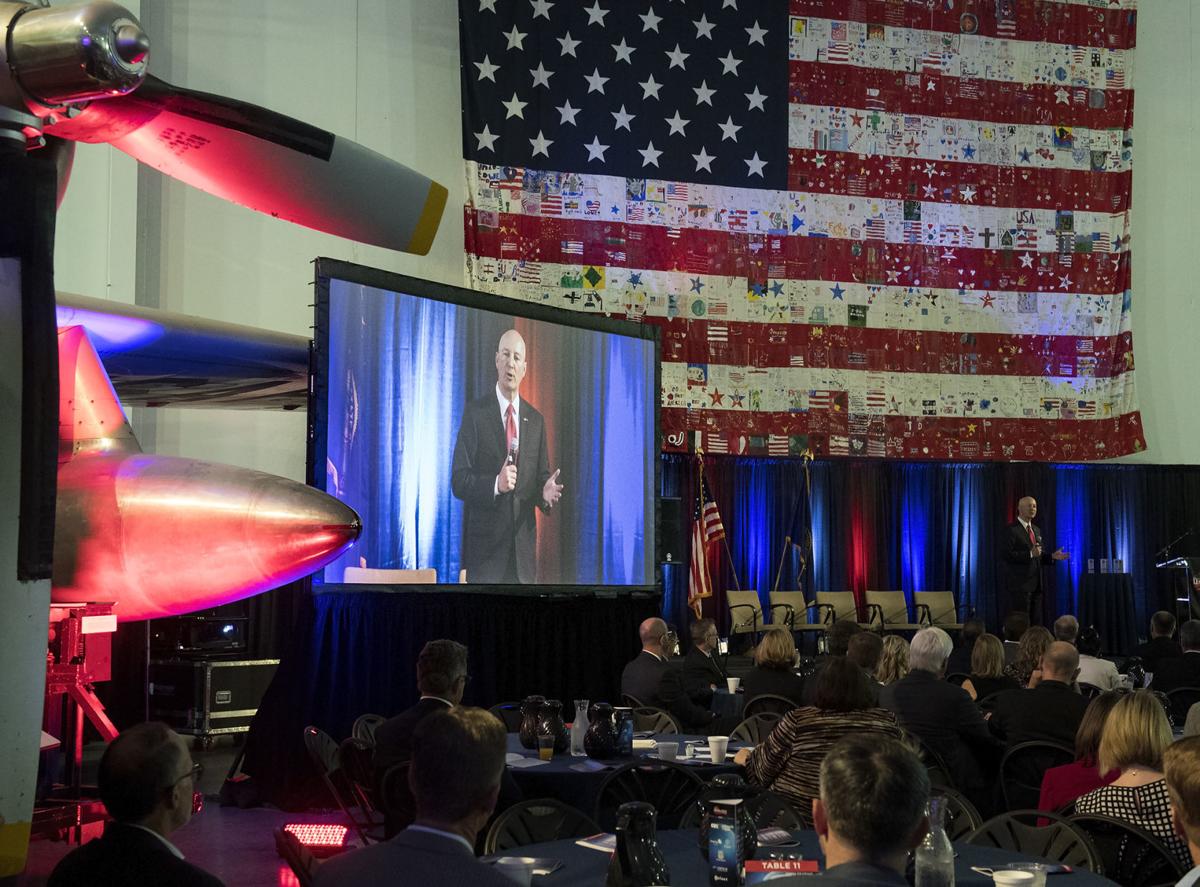 Nebraska Gov. Pete Ricketts speaks at the Federal Legislative Summit on Thursday at the Strategic Air Command and Aerospace Museum. 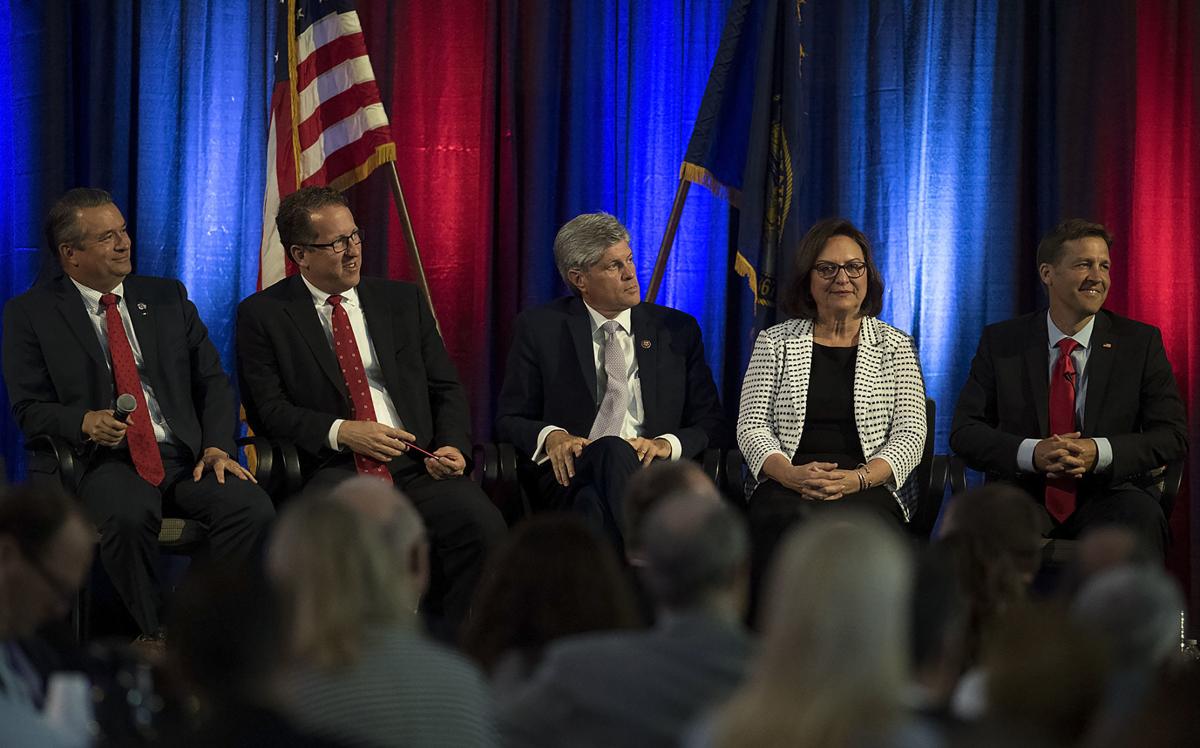 Reps. Don Bacon, Adrian Smith and Jeff Fortenberry and Sens. Deb Fischer and Ben Sasse (from left) await their turns to speak at the Federal Legislative Summit on Thursday at the Strategic Air Command and Aerospace Museum.

ASHLAND — Trade was the topic most on the Nebraska congressional delegation's mind Thursday as its five members huddled with several hundred business and civic leaders at the annual Chamber of Commerce legislative summit.

Gov. Pete Ricketts kicked off the event at the Strategic Air Command and Aerospace Museum with criticism that "Democrats in Congress are dragging their heels" in delaying ratification of the new United States-Mexico-Canada trade agreement (USMCA) negotiated by the Trump administration.

The new pact, written at the president's insistence to replace the North American Free Trade Agreement, promises to be "a great deal," the governor said, and it "needs to get locked down."

Following the governor's remarks, Sen. Deb Fischer said that is a top priority and "we need to get (it) done."

"We shouldn't let politics get in the way," Rep. Don Bacon said.

Rep. Adrian Smith said while it's important to seal the USMCA deal, he's also "excited that a new agreement with Japan is moving forward."

The backdrop for the emphasis on new trade agreements includes President Donald Trump's withdrawal from the Trans-Pacific Partnership negotiated by the Obama administration, a pact that included Japan, Mexico and Canada, along with his scuttling of the NAFTA accord.

Last December, the Nebraska Farm Bureau issued a report that the blow-back from U.S. tariffs imposed by the Trump administration as part of the emerging trade war cost Nebraska farmers a billion dollars in farm income during the year.

"I'm not a fan of tariffs," Smith said during Thursday's event.

Ricketts noted that he will continue his series of gubernatorial trade missions overseas, with journeys to Japan, Vietnam and Germany on his schedule.

During his remarks. Sen. Ben Sasse pointed to the significance of a parade of new federal judges nominated by Trump and approved by the Senate.

"Judges matter a lot," he said, in helping determine "what limited government means."

And "President Trump has done an amazing job with the kind of people he has nominated," Sasse said.

Forty-three new U.S. Circuit Court judges have been confirmed by the Senate along with two new U.S. Supreme Court judges, he said.

Sasse has played an active role in that process as a member of the Senate Judiciary Committee.

Addressing the most recent outbreak of gun violence in America, he said that "obviously we have a Lone Ranger shooter problem" and some of it can be attributed to mental illness that might be addressed through so-called red flag legislation that authorizes courts to temporarily confiscate firearms from people who are deemed to be a danger.

Sasse described that kind of action as "a guard rail."

Fortenberry is a member of the House Appropriations Committee.

The answer is no.

Sen. John McCollister of Omaha, a Republican, has called out his party for "enabling white supremacy in our country" and called upon Republica…

GILTNER — Sen. Ben Sasse is in the organic cornfield, cutting weeds with a machete, sweating in the humid late afternoon under puffy white clo…

Sen. Ben Sasse on Tuesday urged Attorney General William Barr to direct the Department of Justice to "rip up" a 2008 non-prosecution agreement…

Japan-U.S. trade deal will be good for Nebraska, officials say

Nebraska officials cheered the news that the U.S. and Japan have reached a deal in principle on trade.

LACONA, Iowa (AP) — When President Donald Trump levied tariffs on China that scrambled global markets, farmer Randy Miller was willing to absorb the financial hit. Even as the soybeans in his fields about an hour south of Des Moines became less valuable, Miller saw long-term promise in Trump's efforts to rebalance America's trade relationship with Beijing.

Ricketts says leader of Vietnam will come to Nebraska

Prime Minister Nguyen Xuan Phuc of Vietnam has accepted Gov. Pete Ricketts' invitation to come to Nebraska, the governor said Friday, and that…

Nebraska Reps. Don Bacon, Adrian Smith and Jeff Fortenberry and Sens. Deb Fischer and Ben Sasse (from left) await their turns to speak at the Federal Legislative Summit on Thursday at the Strategic Air Command and Aerospace Museum.

Nebraska Gov. Pete Ricketts speaks at the Federal Legislative Summit on Thursday at the Strategic Air Command and Aerospace Museum.

Reps. Don Bacon, Adrian Smith and Jeff Fortenberry and Sens. Deb Fischer and Ben Sasse (from left) await their turns to speak at the Federal Legislative Summit on Thursday at the Strategic Air Command and Aerospace Museum.