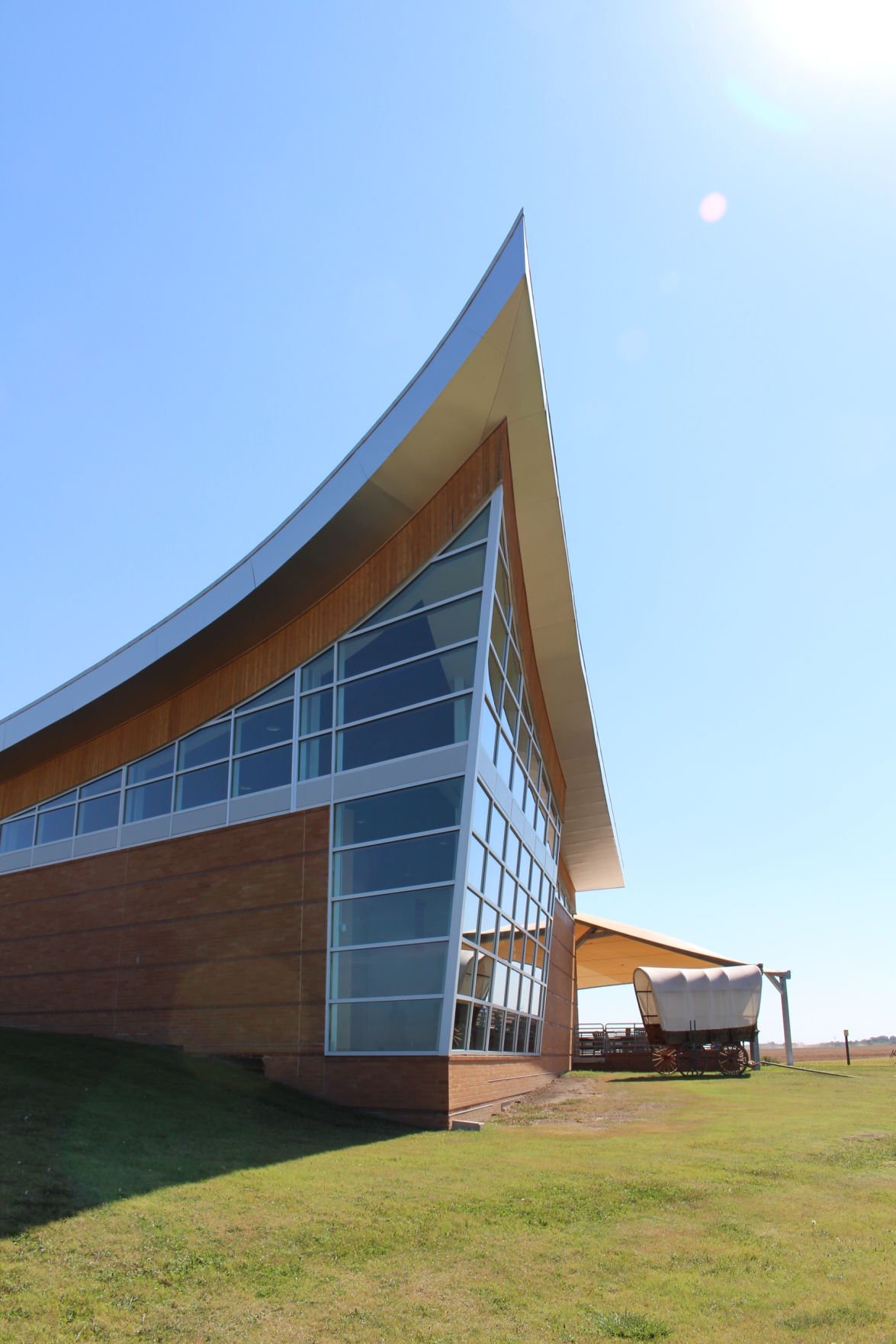 Homestead National Monument and the Beatrice area are expecting tens of thousands of visitors for the Aug. 21 total solar eclipse. 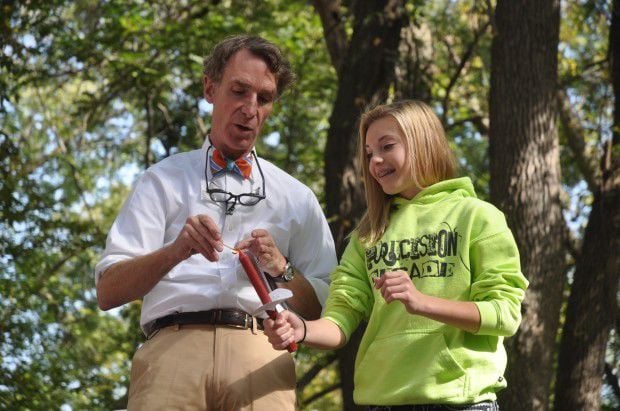 Bill Nye lights a candle for Maddie Pieper during an experiment Sunday afternoon, Sept. 23, 2012, at the Homestead National Monument in Beatrice. Nye spoke to an audience of more than 1,000 about sustainability and climate change.

BEATRICE — President Abraham Lincoln’s signature scrawled across the Homestead Act of 1862 drew 38,000 people to the national park dedicated to the federal land giveaway when the document went on display in 2012.

Those record-breaking figures at Homestead National Monument could soon be eclipsed — so to speak — by the total solar eclipse that will black out the skies on Aug. 21, potentially drawing tens of thousands of people to the Beatrice area.

Near the path of totality's center line, the total solar eclipse near Beatrice will span more than 2½ minutes.

“There’s a lot of excitement here, and the staff has been working very hard and very diligently to get the park ready,” said Superintendent Mark Engler.

Events on Eclipse Weekend begin at 10 a.m. Saturday, Aug. 19, with storyteller Ryan Paul, who will trace "Native American Starlore," or the stories tribes told to explain the constellations.

Since Homestead has been designated an official NASA viewing site, NASA scientists will be on hand to discuss the Solar Probe Plus spacecraft set to be launched in 2018, science laboratories in space, exoplanet studies and the GLOBE Observer, a citizen-scientist initiative to track climate change.

On Eclipse Day, activities begin at 8 a.m. with music by Chris Sayre and the String Beans before “First Contact” is announced at 11:30 a.m., prompting visitors to find their preferred viewing areas.

Bill Nye “The Science Guy," the CEO of the Planetary Society, and Amy Mainzer of the PBS Kids’ show "Ready Jet Go!" will explain the phases of the eclipse before they announce “glasses on” at 1 p.m., just in time for the 1:02 p.m. beginning of totality.

NASA TV will be broadcasting live from a point near the Heritage Center throughout the day.

Rangers will mark areas targeted for a controlled burn this fall where astronomers can set up telescopes and visitors can stake out a spot to watch the cosmic event.

Farming demonstration areas at the Education Center on the banks of Cub Creek on the park’s west side and the Heritage Center overlooking the park’s eastern border will also be cleared and made available for visitors.

Engler said one amateur astronomer requested enough room for his telescope that requires the viewer to scale a 12-foot ladder.

Other space closer to Nebraska 4, which cuts through the park from the southeast to the northwest, may also serve as viewing grounds, Engler said. Homestead is working with the Nebraska Department of Transportation to open those areas.

When the moon moves in front of the sun, however, and the shadow approaches at 1,500 miles per hour, Engler said Homestead plans to let the spectacle speak for itself.

"Basically, we're going to go silent with our programming during totality," he said.

Getting to the park

A free shuttle service will operate from 10 a.m. to 10 p.m. on Saturday and Sunday of Eclipse Weekend between Homestead and three sites in Beatrice.

Park visitors who plan to use the shuttle should park near the Gage County Fairgrounds at 321 Logan St.; Aunt Mary’s Café at 111 S. Eighth St.; and Jim’s Carpet at 308 Court St. and follow signs and directions to the pick-up and drop-off points.

The pick-up and drop-off sites will expand to a number of area hotels, as well as the Beatrice Municipal Airport on Monday, Engler said.

Homestead will close the Heritage Center parking lot at 6 a.m. on Eclipse Day.

Parking will be available on the gravel roads surrounding Homestead: Southwest 75th Road, Southwest 89th Road and West Hoyt Road. Signs and staff will direct vehicles to the parking areas.

Engler said Homestead will be staffed 24 hours a day for Eclipse Weekend — a first for the park in his tenure — both to accommodate extended hours and to assist visitors.

Motorists backed up on U.S. 77 driving south into town might witness another rare event: Beatrice Municipal Airport is expecting as many as 200 planes to arrive for the event from all over the country.

People who arrive a few days early have a dwindling set of options.

Hotels in Beatrice have been sold-out for months for Eclipse Weekend, but city officials won’t turn away those who don’t mind roughing it.

Camping spots with hookups at Chautauqua Park and Riverside Park, both nestled along the Big Blue River, will be available on a first-come, first-served basis.

But to accommodate an influx of people — outside estimates range wildly from 10,000 to 100,000 people expected to converge on the area — Beatrice will also open up other green space for dry camping free of charge.

"If someone wants to put a tent up in Chautauqua Park, we’re not going to chase them out,” said Tobias Tempelmeyer, city administrator. “We get to keep them in town, so that’s the win we get.”

Beatrice police and firefighters, as well as other city workers, will be posted at sites around the city of 12,500 people to answer questions and direct traffic.

Planning for the once-in-a-lifetime event lasting 2 minutes and 34 seconds began more than three years ago.

Lora Young, executive director of the Beatrice Area Chamber of Commerce, has traveled across the country promoting Beatrice's vantage point for the experience.

"It will be great weather, because that's what the Chamber of Commerce promises," she said.

Plant-based chIcken nuggets come to the US market

Plant-based chIcken nuggets come to the US market

Navy ship is treated to a light show from Mother Nature

Navy ship is treated to a light show from Mother Nature

Countdown to Totality: Your updating guide to the Aug. 21 total solar eclipse

While most people will be on the ground looking up Aug. 21 at the first total solar eclipse to cross the U.S. in nearly a century, Austin Aren…

If the first day of fall classes at the University of Nebraska-Lincoln weren't hectic enough for the 25,000-plus students on campus, the first…

City Hall: No room in our inns for the eclipse

The state of Nebraska is going to grow by several hundred thousand people on Eclipse Monday by all estimates. And some of these visitors have …

Nebraska’s only astronaut, who spent a good chunk of his childhood in his backyard aiming a Sears Roebuck telescope into the night sky, is com…

They're made of cardboard. They cost a dollar, maybe two. And they'll keep your eyeballs from feeling like they've been rubbed with sandpaper.

Celestial stops: Where to watch the 2017 eclipse in Nebraska

For one day, Lincoln could be the largest city in Nebraska that matters.

Nebraska is three weeks from what could be its biggest-ever tourism event.

A local bicycling group is inviting riders of all levels to participate in a two-wheeled trek south of Lincoln for the Aug. 21 total solar eclipse.

Draw a line with a felt-tip marker from Portland, Oregon, to Atlanta, Bill Nye the Science Guy said, and you’ve basically recreated the path u…

Homestead National Monument and the Beatrice area are expecting tens of thousands of visitors for the Aug. 21 total solar eclipse.

Bill Nye lights a candle for Maddie Pieper during an experiment Sunday afternoon, Sept. 23, 2012, at the Homestead National Monument in Beatrice. Nye spoke to an audience of more than 1,000 about sustainability and climate change.