The Nebraska State Patrol says it is continuing a review of its evidence handling and storage procedures following a security breach that resulted in $1.2 million in drugs being taken from an evidence facility.

The patrol is not commenting on what specific steps it is taking, however, and has used an exemption for law enforcement agencies in the Nebraska Public Records Statutes to keep its current policy from being made available to the public.

The Journal Star requested a copy of the patrol's policy or training materials for evidence technicians in September following the arrest of Anna Idigima, a former employee accused of taking narcotics from an evidence storage facility.

State Patrol Col. John Bolduc, in an interview with the Journal Star, said Idigima abused a position of trust and was the only person who could have removed more than 150 pounds of marijuana, 19 pounds of cocaine and 10 pounds of fentanyl.

But the patrol has declined to say how the employee with 14 years of experience allegedly took the drugs from the Troop H evidence storage building in Lincoln, and has maintained its evidence-auditing and storage protocols continued to meet standards set by the Commission on Accreditation for Law Enforcement Agencies.

On Sept. 28, the Journal Star requested a copy of the patrol’s policy for handling evidence, as well as evidence audits and quarterly checks of the Troop H evidence locker dating to 2015.

The patrol provided a heavily redacted policy document — 20 of 21 pages were fully blacked out — and declined to provide the annual evidence audit and quarterly checks, citing an exemption for law enforcement agencies from the public-records laws.

The newspaper appealed the decision to the Nebraska Attorney General’s Office on Oct. 4. In an Oct. 20 response, the attorney general said the denial complied with state statute.

The disposition letter, signed by Assistant Attorney General Leslie Donley, said the office “initially questioned” whether the audits could be withheld under the exemption cited by the patrol.

Jessi Forch, an attorney at the patrol, acknowledged in a written response the evidence audits were different from the “normal investigative records” law enforcement agencies typically claim as an exemption, while arguing they were now related to Idigima’s alleged theft from the patrol’s evidence facilities.

Donley said the evidence audits, which aren't created in relation to any particular case or investigation, didn't appear to fit within the exemption.

“Rather, it appeared to us that annual audits of the evidence facility were conducted by the agency as a matter of routine and oversight," Donley wrote.

But a probe into the alleged theft by the Lincoln Police Department, and a claim by Lancaster County Attorney Pat Condon to the attorney general's office that the audits are part of a criminal investigation, created “appropriate” circumstances for the patrol to withhold them under state law, Donley said.

Along with denying a request to provide the evidence audits, the patrol also declined to provide a copy of its evidence-handling policies.

“The establishment and maintenance of correct in-custody property handling procedures are very important to the successful prosecution of cases in the judicial system and for safeguarding the property of innocent victims,” the policy’s introduction states.

Along with providing specific guidelines for handling evidence and property, the policy also establishes procedures for the temporary and permanent storage, and outlines procedures for inspecting those facilities, according to an unredacted portion shared with the Journal Star.

But following the introduction, the next 20 pages provided by the patrol in response to the Journal Star’s public-records request were entirely redacted.

In an explanation to the newspaper, as required by law, the patrol said the policy was deemed “strategic or tactical information used in law enforcement training,” one of about two dozen exemptions to the public-records statutes created by the Legislature.

The patrol previously used the same exemption in 2020 when the Journal Star requested a copy of its policies for using tear gas, foam bullets and other nonlethal munitions — something the Lincoln Police Department and Omaha Police Department make available online.

In its letter, the attorney general’s office said while it didn’t view the evidence handling and storage policies as “tactical,” it said they could be considered “highly strategic as to the disposition of evidence and seized items.”

The policy outlines the types of evidence storage locations, types of safes and boxes used, the duration seized items are held, procedures for storing high-value items and the methods for transporting and destroying items, the attorney general’s office explained.

Lt. Cory Townsend, who oversees the patrol’s policy and accreditation procedures within the Professional Standards Division, told the attorney general in a statement making that information public could “undermine law enforcement operations.”

For example, the policy sets forth how evidence technicians handle large amounts of cash, and how deposits are made and at which bank, Townsend said, information that could be useful to individuals wishing to steal that money.

“Consequently, we believe that the redacted information appears to fall within the language of the exception and that the NSP has a sufficient statutory basis to continue to withhold it,” Donley wrote.

John Bender, associate dean of the University of Nebraska-Lincoln’s College of Journalism and Mass Communications, said the arguments put forward by the patrol in withholding the audit documents and heavily redacting its policy document were plausible.

“The audits may well relate to the prosecution of Anna Idigima,” Bender wrote in an email. “And there may be information in the policy that, if disclosed, could compromise patrol operations or officers. The example about the handling of large sums of money fits that criterion.”

But Bender said it seemed excessive to redact nearly the full document: “It seems hard to believe that all of it is of such strategic or tactical importance.”

“The Nebraska exemption can be invoked by a wide range of state agencies beyond just the traditional law enforcement ones, and it is not limited in duration,” he explained. “Conceivably, the records could be sealed forever.”

Cody Thomas, public relations director for the patrol, said the agency would not release any materials that may be part of an ongoing investigation into the alleged theft from its evidence locker, even as more than 60 drug cases and convictions have been dismissed by prosecutors.

“NSP will not do anything that may compromise the ongoing investigation and prosecution in this case,” Thomas wrote in an email. “NSP works closely with county attorneys throughout the state on thousands of cases each year. We trust the judgment of the county attorneys to handle those cases.”

He added the patrol is continuing an examination of its procedures and implementing changes.

As far as finding out what those changes are, the state’s broad exemptions from the public-records laws afforded to law enforcement agencies may keep those out of the public eye.

“About the only way to test that is to sue,” Bender said, “and there’s no guarantee you’ll get what you want.” 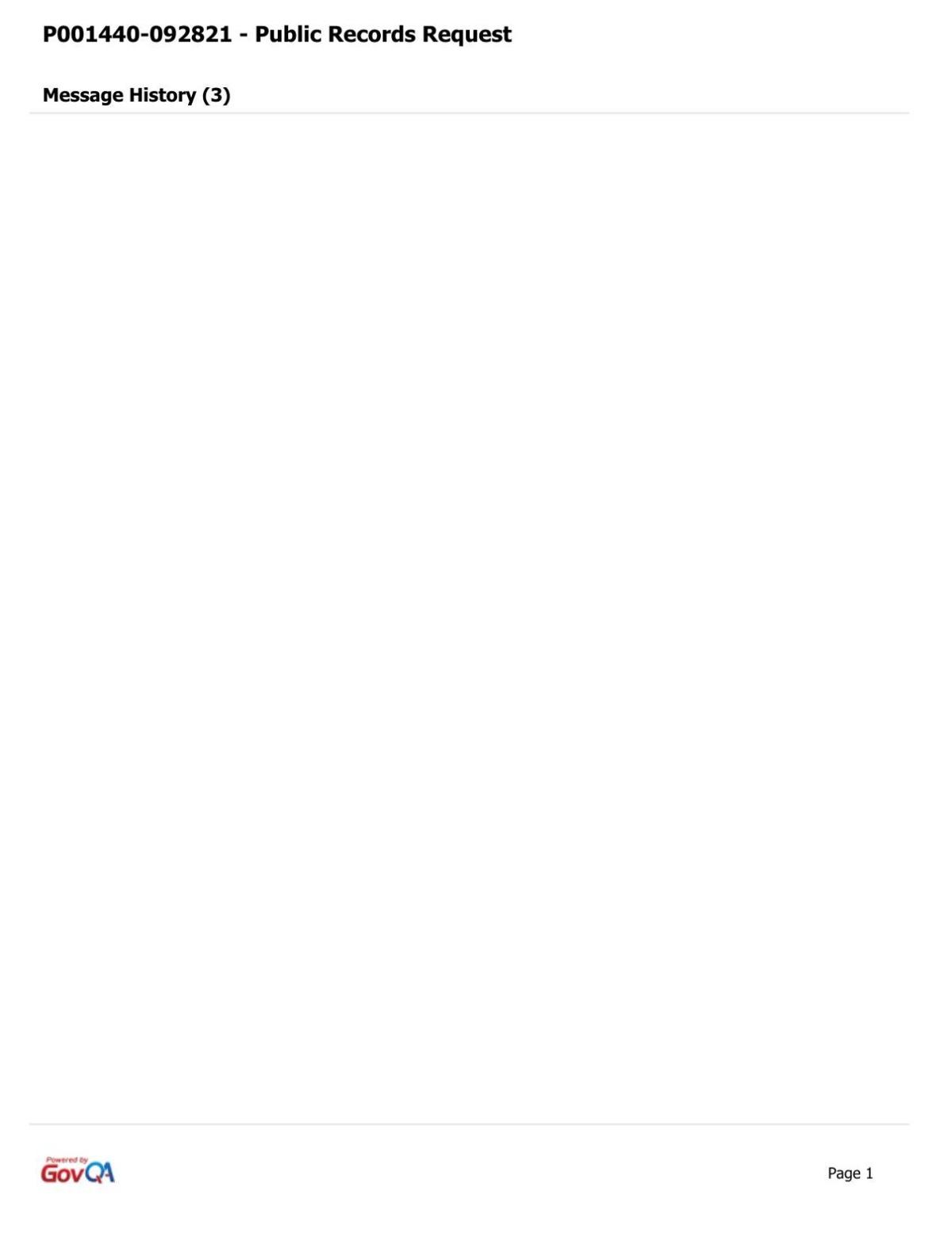 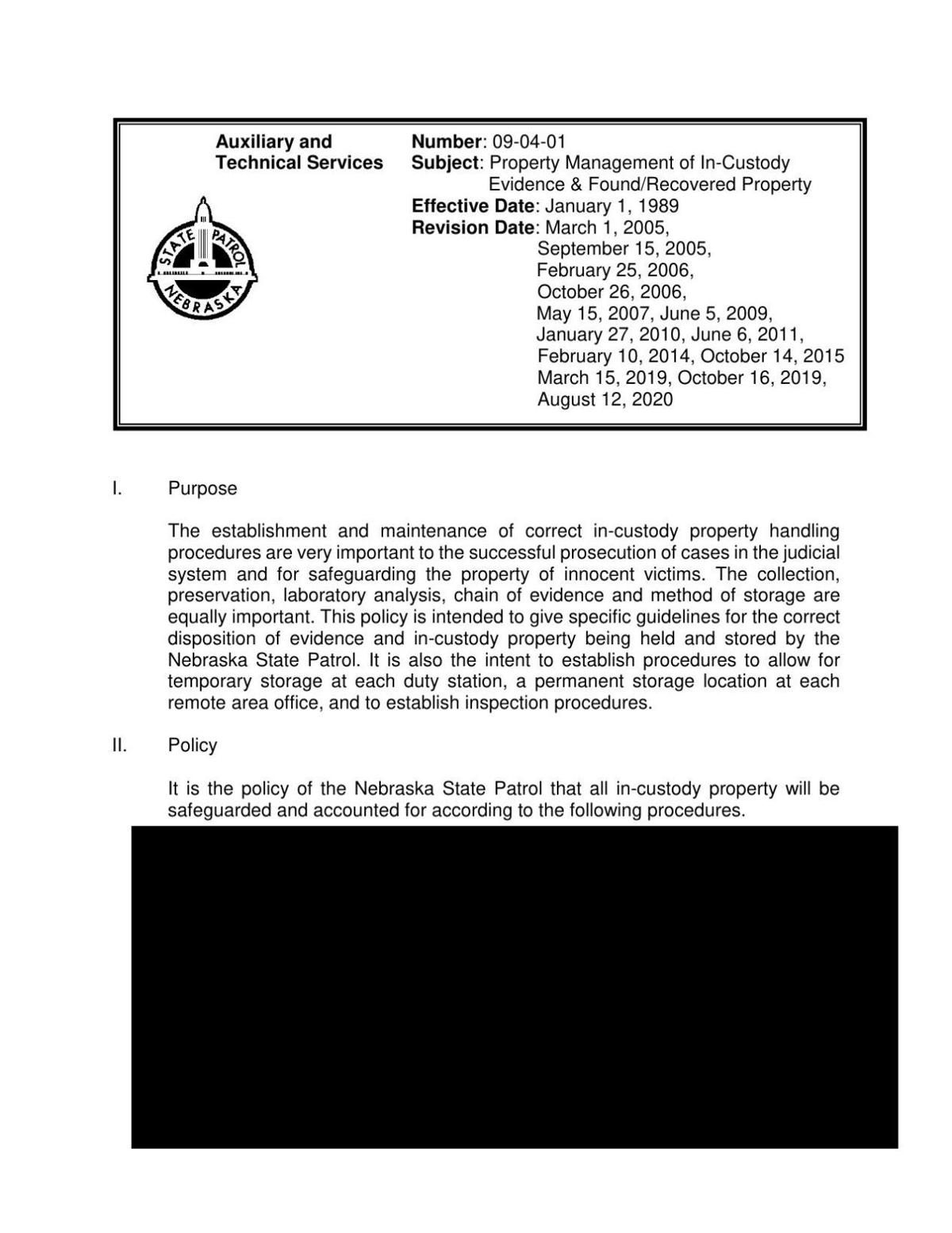 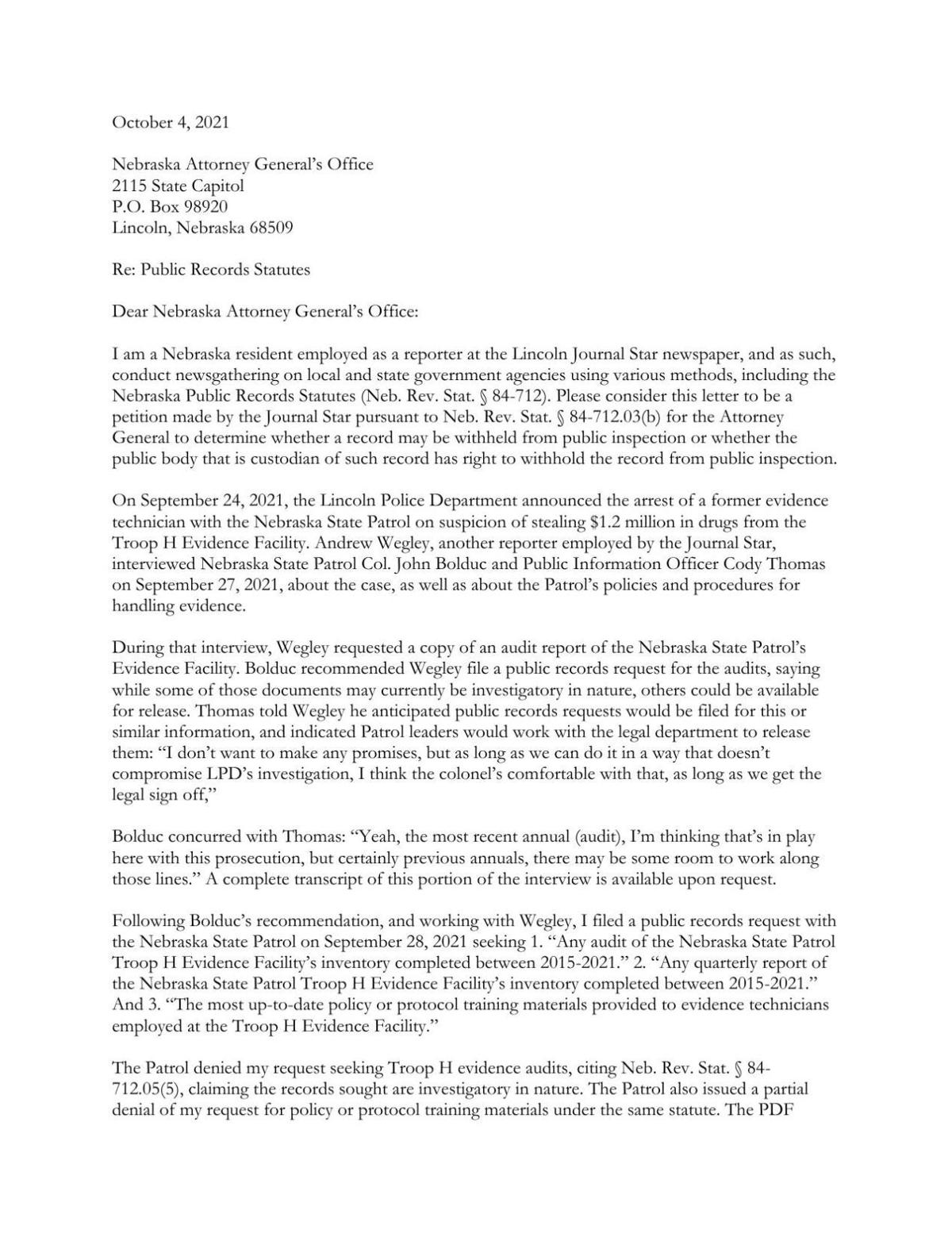 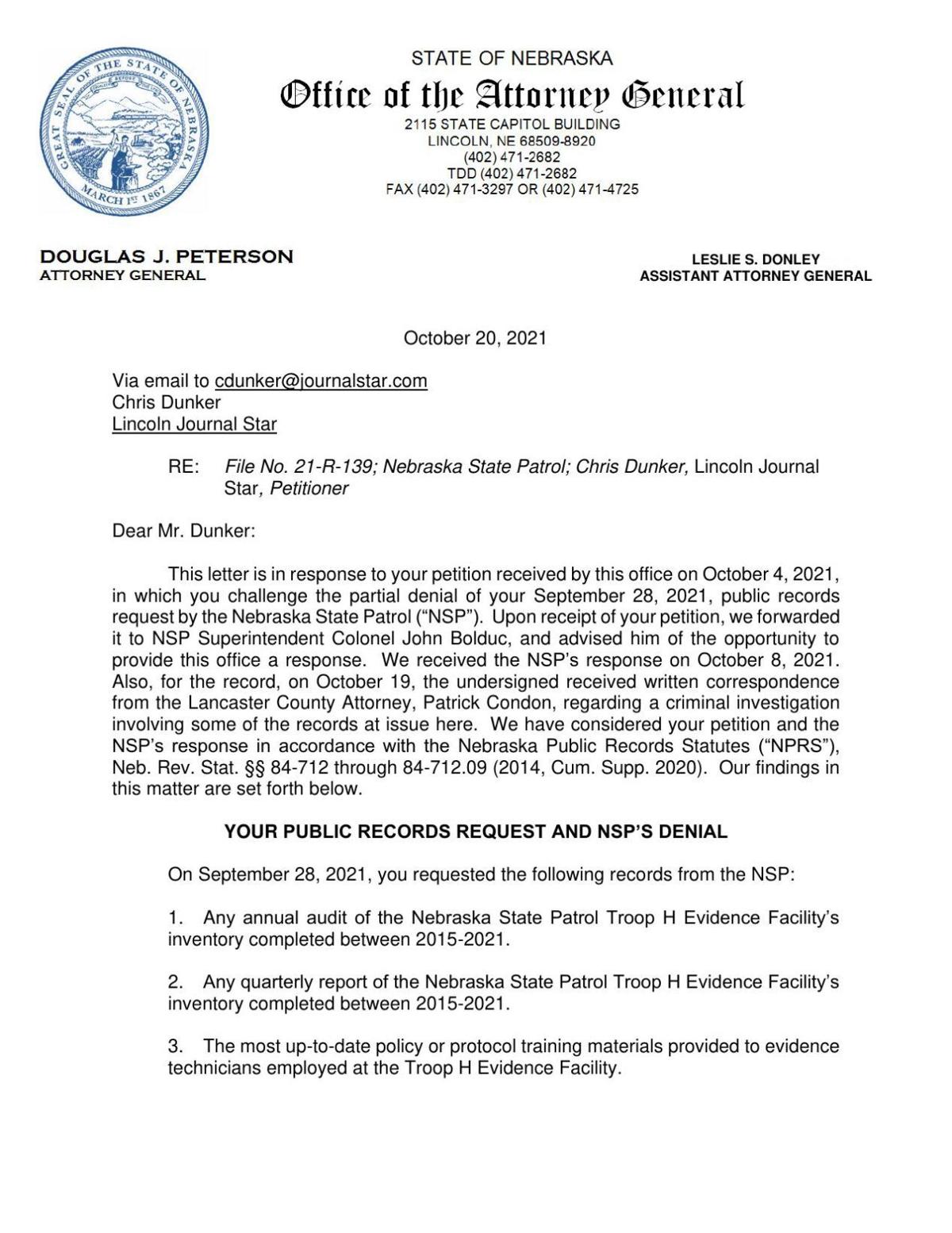 Under state law, every defendant has the right to ask for retesting or independent testing of seized drugs. If they no longer have the drugs, a case could be affected, one Nebraska defense attorney said.

A former patrol evidence technician and the owner of a Lincoln restaurant were arrested in the theft of more than $1.2 million worth of narcotics, including $329,800 worth of cocaine, according to the State Patrol.

Former state Sen. Ernie Chambers cut the ribbon on a North Omaha museum that will be named for him and saw his name unveiled on a commemorative street sign.

Dashcam video shows the then-trooper rush the man — who had led law enforcement on an hourlong chase — and strike him on the side of the head with the butt of his rifle.

"The phone calls include Ms. Idigima and Mr. Weaver discussing the case, witnesses and video evidence of their pending charges," according to the petition for action on conditions of pretrial release. 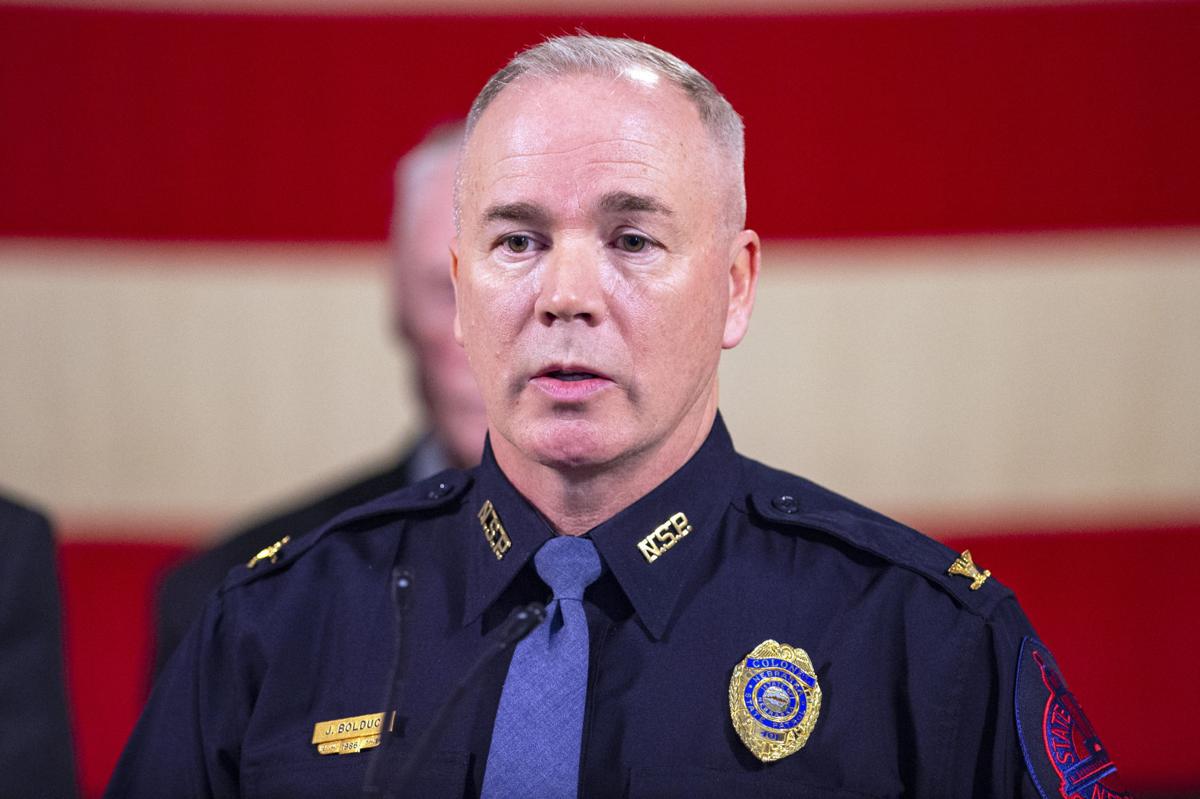 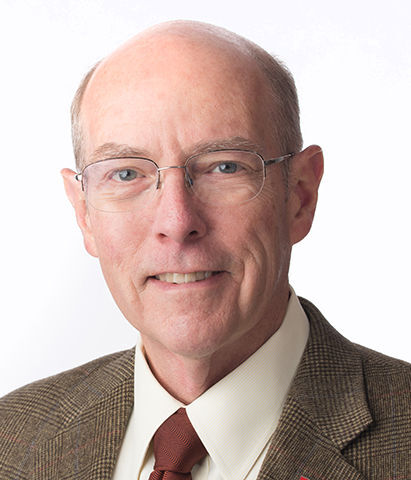 John Bender, associate dean of the University of Nebraska-Lincoln’s College of Journalism and Mass Communications