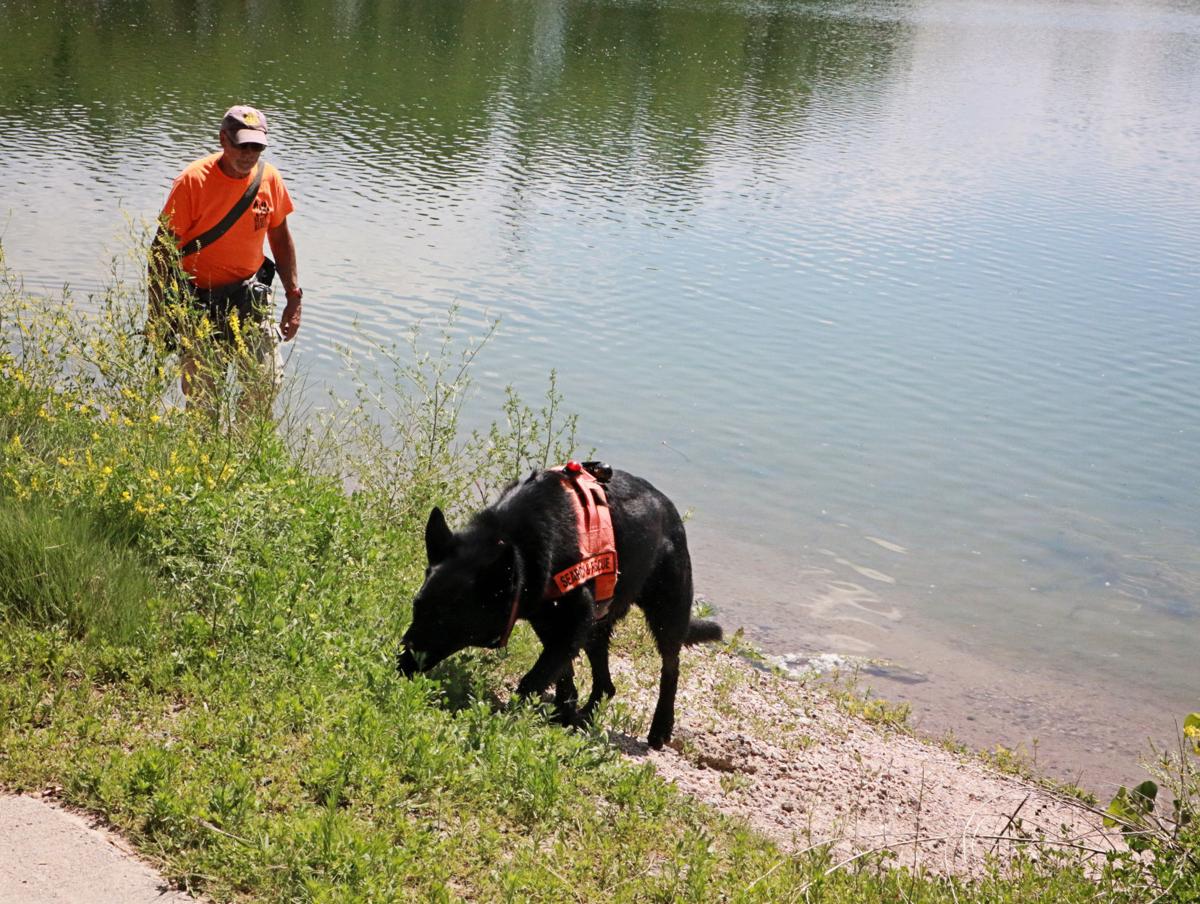 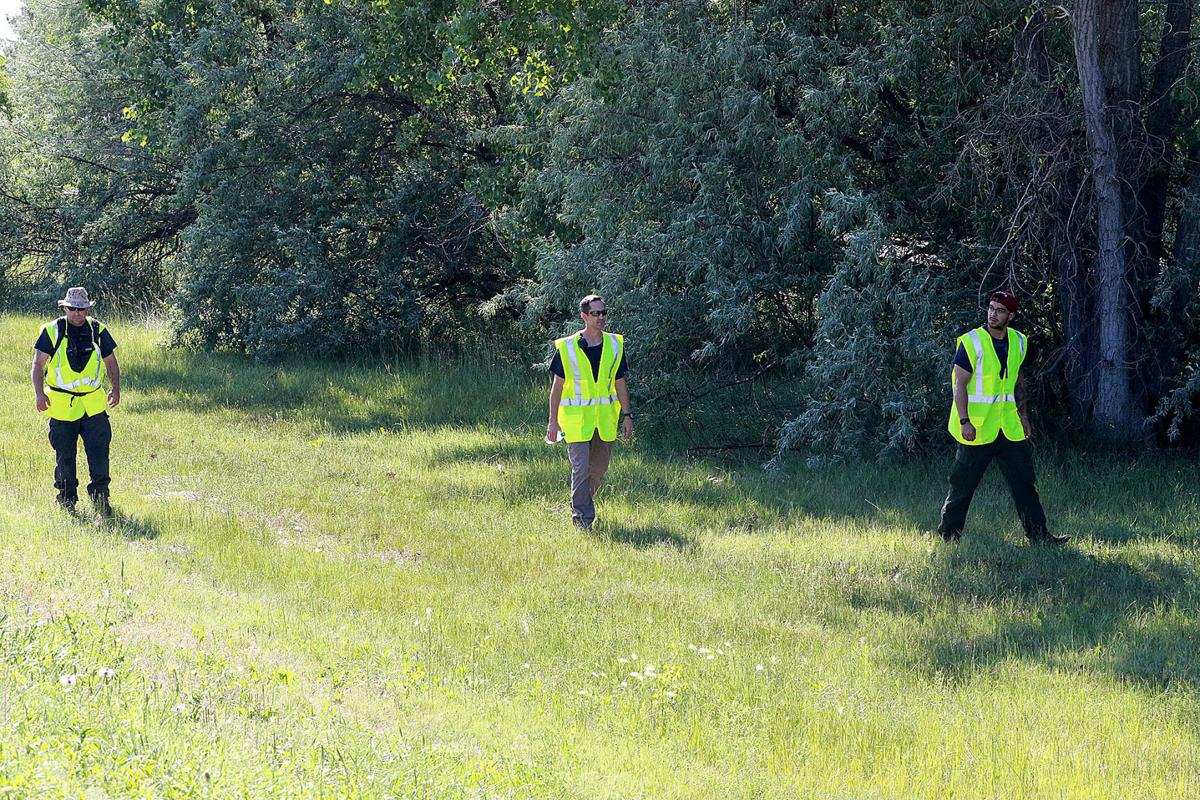 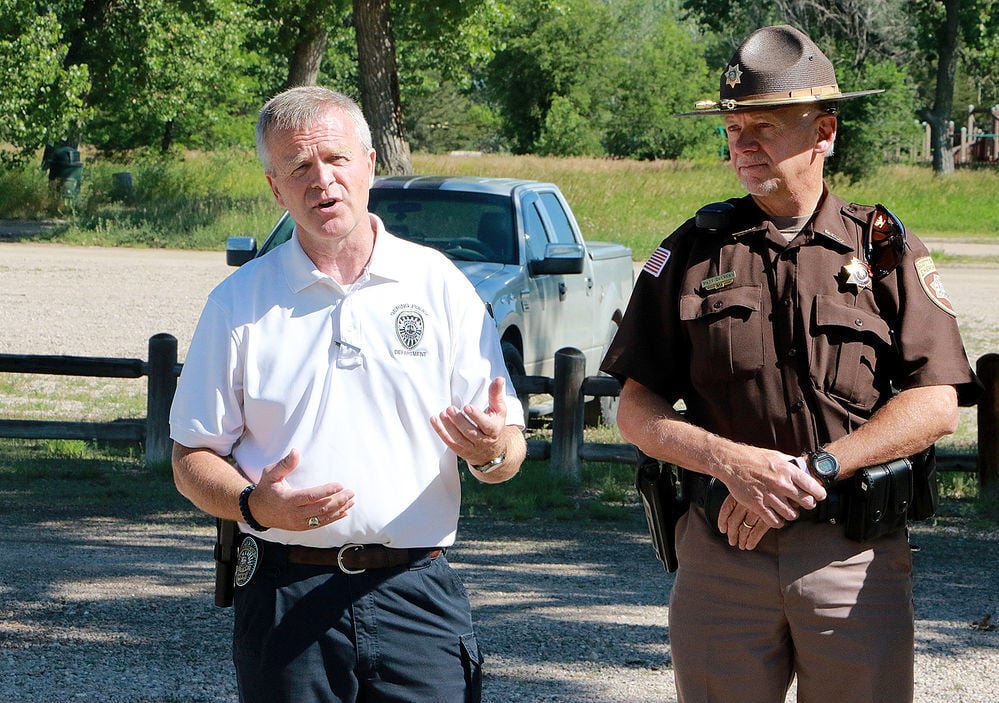 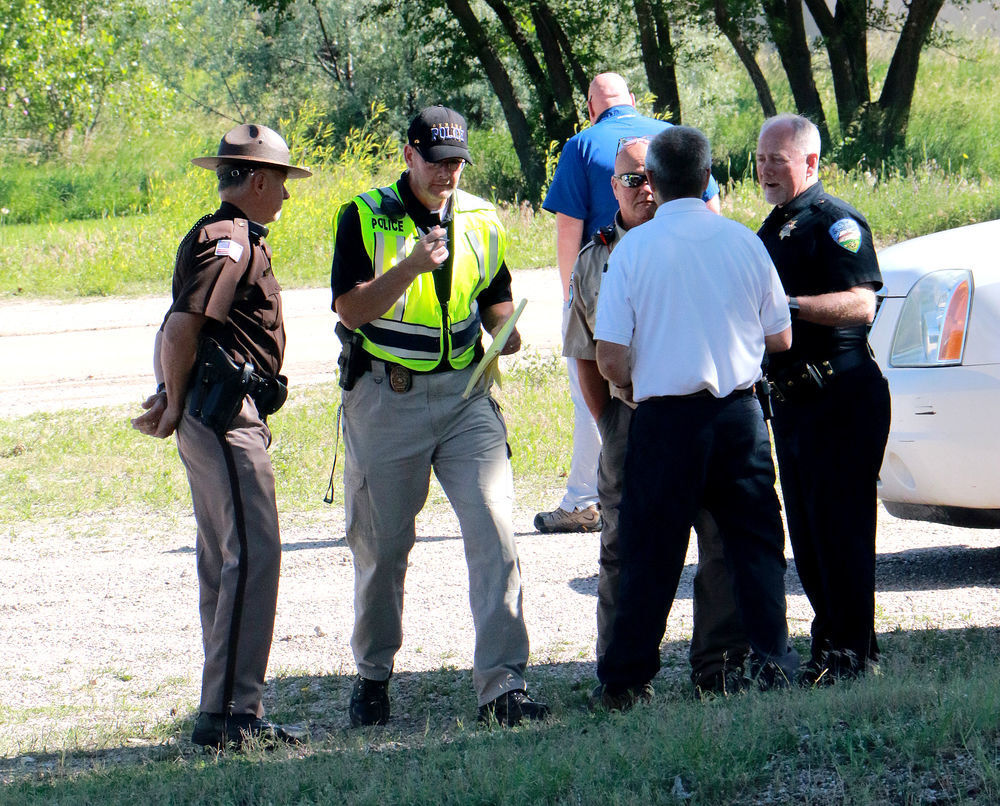 Area law enforcement and CERT personnel hold a brief meeting prior to a media press conference Tuesday morning about missing man Chance Englebert. Several agencies are helping with the search. 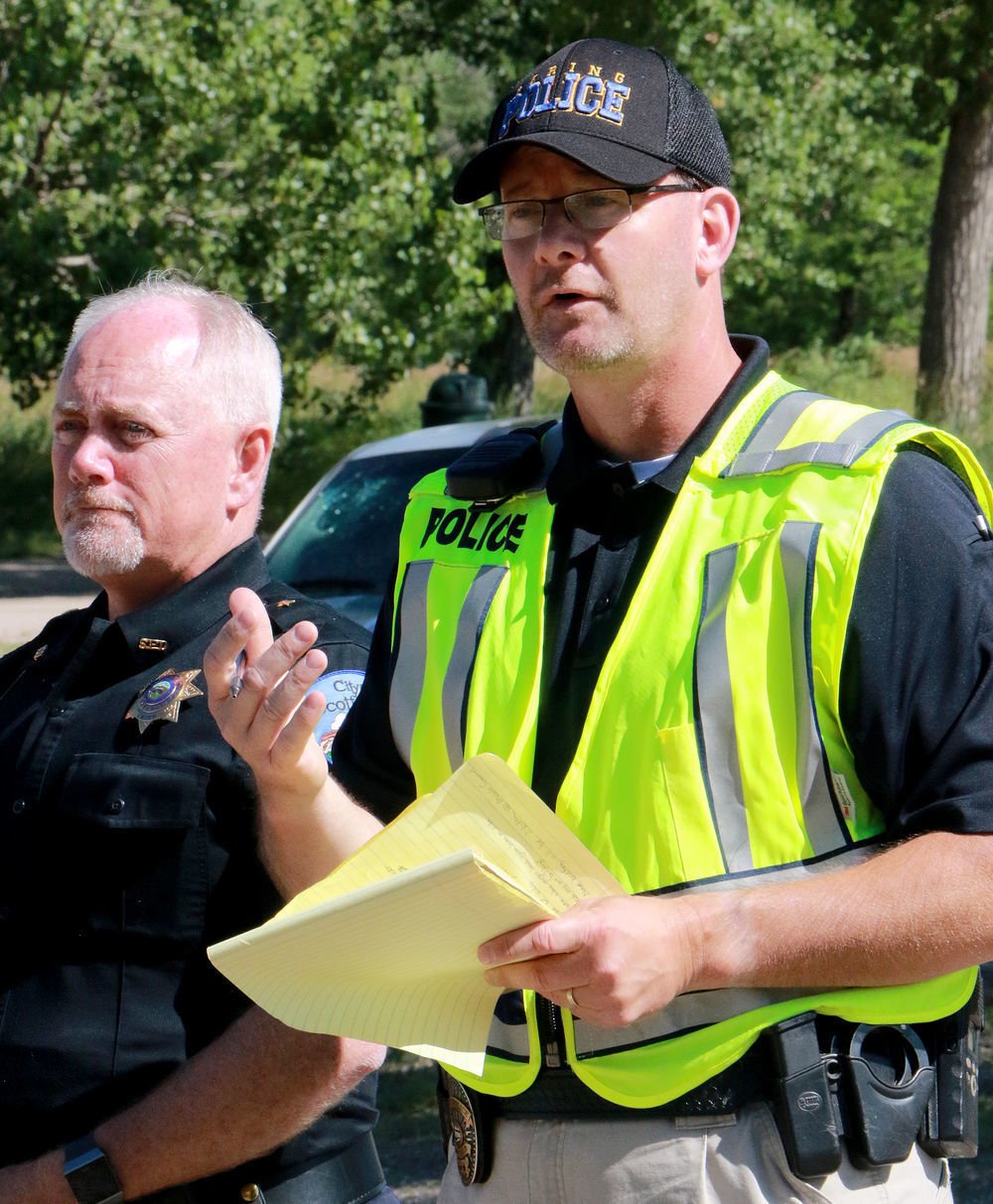 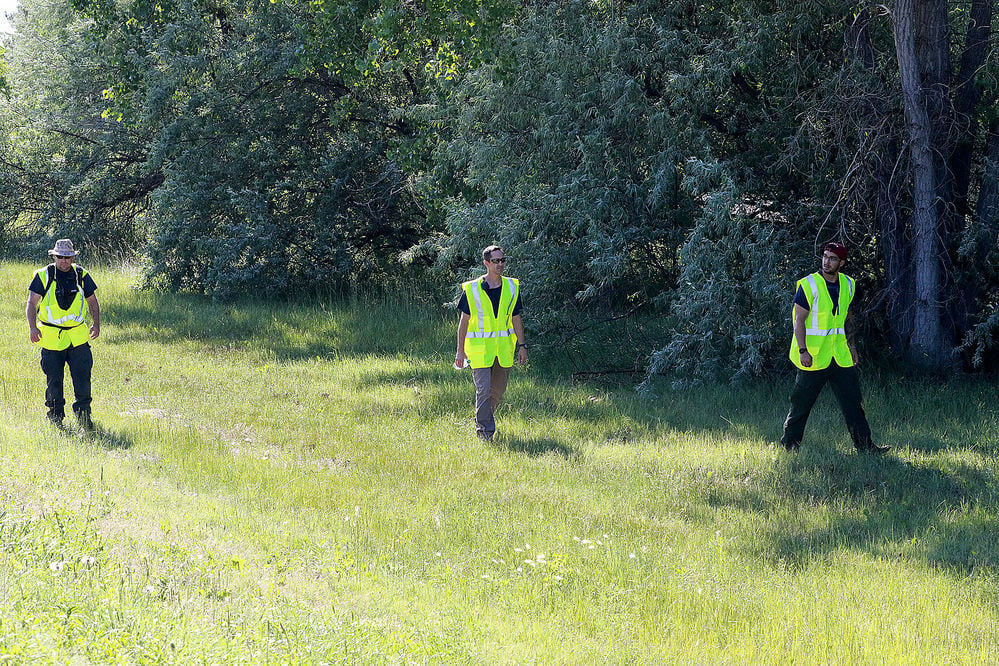 SCOTTSBLUFF — Gering Police continue to ask for the public’s help with gathering video and information as officials from more than 16 agencies are search for a Wyoming man who has been missing since Saturday.

Chance Englebert, of Moorcroft, Wyoming, had been reported missing over the weekend. His wife, Baylee Englebert, told the Star-Herald that her husband had last been seen on Saturday, at about 7:30 p.m. He had left the home after becoming upset, she said.

Since then, family or friends had not heard from Englebert since Saturday night. Authorities spent Monday searching for the man and those searches resumed on Tuesday morning. In press conferences Tuesday, Gering Police Capt. Jason Rogers said more than 50 people were involved in search efforts.

On Tuesday, searchers focusing on conducting a coordinated search in the southwest part of Scottsbluff and some adjacent rural areas. Each search team is tasked with searching assigned grids and “they are going to go until they have exhausted all those areas they have been assigned,” Rogers said. By 3:30 p.m., searches had concluded for the day and would resume on Wednesday.

The public can assist by contacting police if they have any information that can assist police, Rogers reiterated Tuesday afternoon.

“We are also asking any property owners to check any of their outbuildings, any buildings on their property where someone may have ducked into to get out of the weather or to take shelter.”

Rogers said police have not recovered any items belonging to Englebert.

Goshen County Search and Rescue has been among the agencies involved in the search.

Jerry Numon of Goshen Search and Rescue worked with his K-9 Pax around Terry’s Lake Tuesday afternoon along with other rescue personnel as they searched for Englebert. Numon said Pax is a trained human remains detection (HRD) dog. Pax is searching for the human scent and if he alerts on the scent, he will lie down and bark.

“A cadaver is made up of 480 to 490 scents from different types of molecules,” said Numon. “Humans are the only ones that have that. He’s (Pax) been trained on over 40 different animals in heat and out in the wild.”

Numon added that they are working along bodies of water looking for a cadaver.

“The minute that you die, the oils start to leave your body and they will come up and float and attach on the leaves and trees,” he said.

As of Tuesday afternoon, Rogers reports that the last known sighting of Englebert was captured on video surveillance at about 7:51 p.m. Englebert’s wife had told the Star-Herald that the last time anyone reported talking to him was at 8:45 p.m.

Investigators from each agency are running down video surveillance in the communities and reviewing it. Gering Police Chief George Holthus said Englebert had been observed on video surveillance of a Gering business on Tenth Street about 7:49 p.m., walking northbound, Saturday. By the afternoon, police had acquired video that showed Englebert in the area of Martha Road. It is the last known spot where Englebert was seen.

Holthus said that locations of the searches were decided based on cellular data and that authorities are continuing to drill down on that data. Englebert’s cell phone has not had service since Saturday night.

A poster circulating on Facebook Monday night reported Englebert had been seen on video surveillance at Western Travel Terminal at about 10 p.m. Saturday night, but Rogers said he couldn’t confirm that. The same poster has been circulating in the community, offering a reward, but Rogers said that his agency has not been involved in facilitating any award that may be offered.

It is undetermined at this point how long law enforcement and other agencies will continue searching for Englebert. Rogers said some locations have been determined to search Wednesday, and depending on the results of those searches, officials will come together afterward to decide how long search efforts will continue.

Anyne with information in Englebert's disappearance can contact the Gering Police Department, 308-436-5089.

Area law enforcement and CERT personnel hold a brief meeting prior to a media press conference Tuesday morning about missing man Chance Englebert. Several agencies are helping with the search. 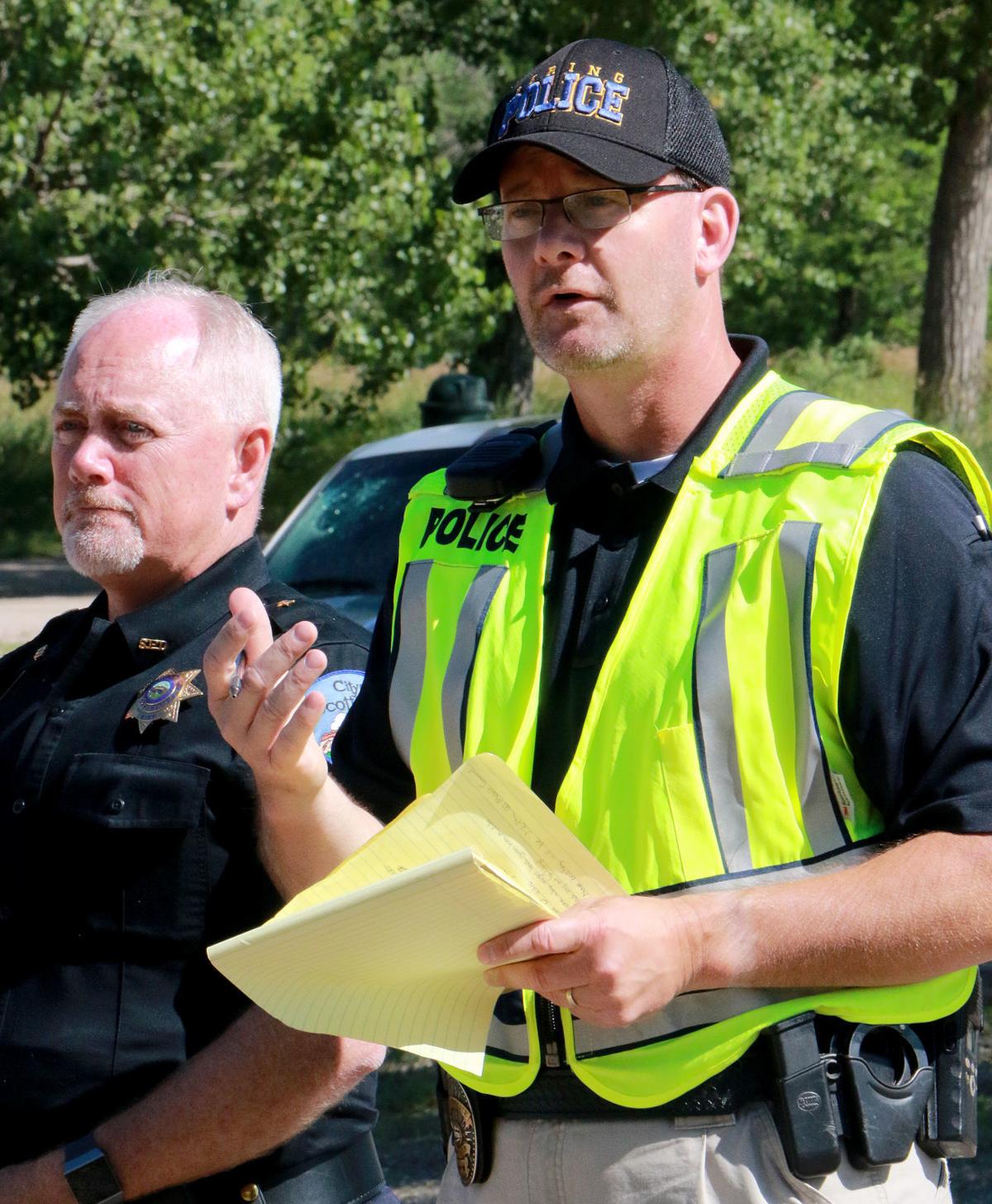 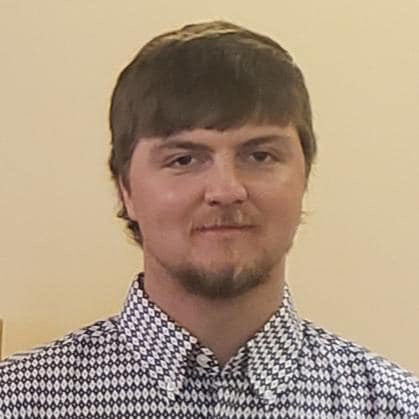