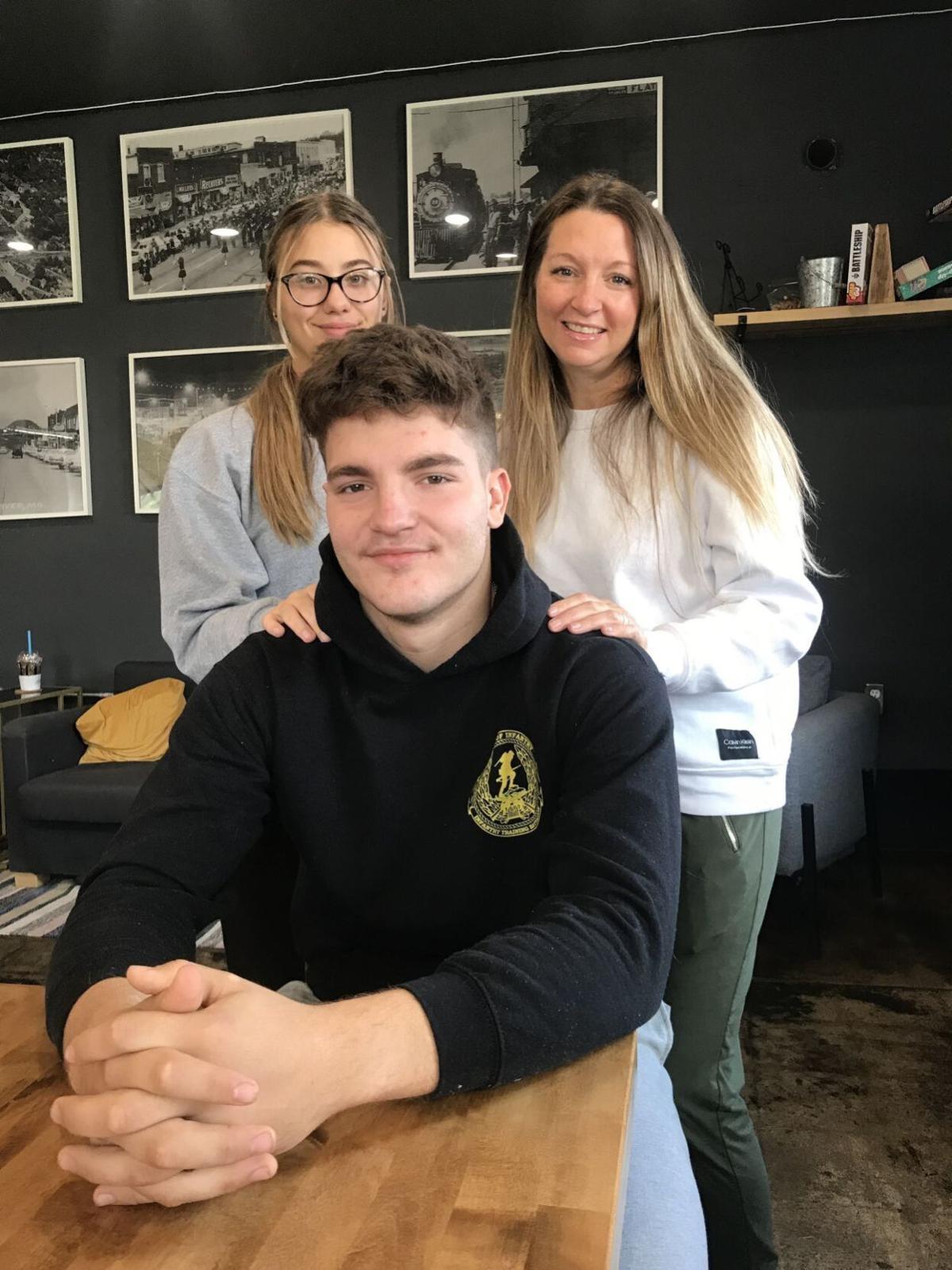 Kaitlyn, Ben and Sarah Dunlap reminisce at RaeCole's coffee shop in Park Hills about the viral video, Ben's 29 days home from his service to the Marine Corps, and about his and Kaitlyn's engagement on Friday and marriage on Monday. 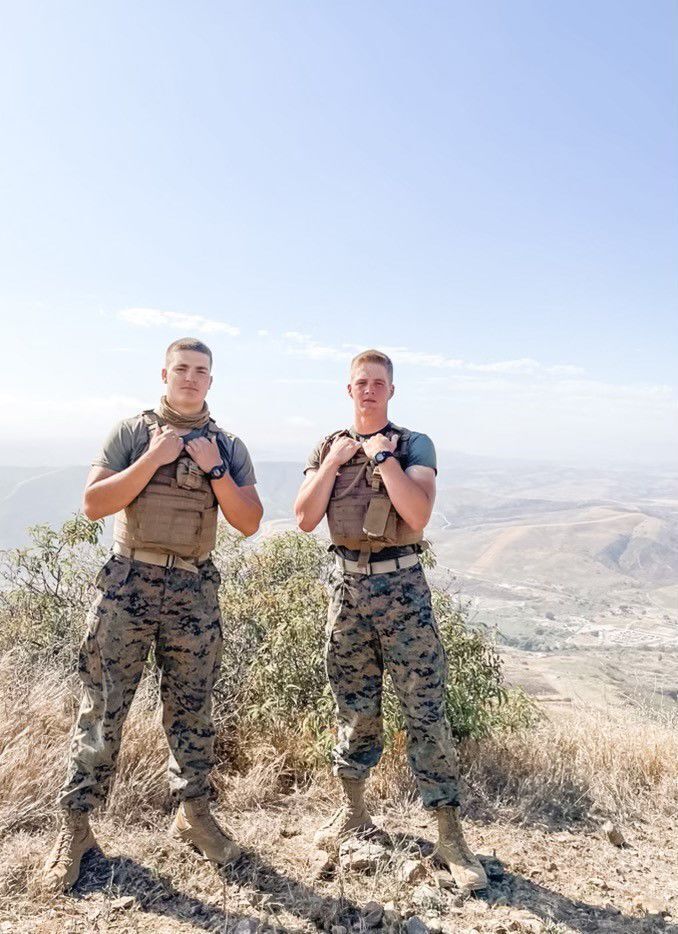 Ben and a fellow Marine go through training exercises in California.

A squeal of delighted surprise can be heard at the top of a video that’s gone viral, featuring a Bonne Terre mom being welcomed home by her 10-days-early son, a Marine.

With help from the Bonne Terre Chamber of Commerce’s Leigha Head and Amy Proffer of A1 Home Care, the people in the video that was released a month ago have been identified.

Sarah Dunlap, who with her husband Brian lives in Terre Du Lac, said she’d expected her son, Ben, home from infantry training on Sept. 18, but family had conspired to conceal his real arrival, Sept. 8, for the surprise.

“They did a good job, he and his sister (Morgan Stegall) planned it, and Kaitlyn (his then-fiancee). They had me completely fooled,” Sarah said Wednesday. “The video captured it, I had no clue he was coming that week.”

The video that’s been uploaded and seen on TikTok and YouTube hundreds of thousands of times shows Ben, who graduated from in 2020, sitting on the living room couch as the door to the garage opens and his mom, Sarah Dunlap, pauses silently and briefly in the doorway. She then squeals with surprise and briefly disappears back into the garage, as her son rises from the couch, comes forward and they hug.

“I had been told, let’s meet for lunch. I said, well let’s meet at the restaurant, it’s right up the road. But they said no, no, let’s just meet at the house first. I was like, fine, we’ll meet there,” Sarah remembered. “And there he is, sitting on the couch nonchalantly, and he kind of waves at me.

"I had trash in my hand (coming in from the garage), so I turned around and set it on the dryer and came back in,” she said with a laugh. “Oh, my gosh, it was such a genuine reaction, the screaming. I was completely overwhelmed, I didn’t even know what I said. It was great.”

Part of what she said toward the end of the 47-second video, in between hugs with her son, was a quick “Your baby’s in the car,” to her daughter, Morgan, who promptly moves toward the garage, getting a pat on her rear from Sarah as she sets out to retrieve her daughter Ida.

“I had brought that handful of stuff in and was going back for her (Ida) when I saw Ben!” Sarah said. “Morgan said she was waiting patiently in her car seat like, ‘Nana, are you coming back?’”

The video was eventually uploaded to TikTok by Morgan that evening, although everyone in the living room was armed with cameras.

“We all had video so we could get every angle,” said Kaitlyn. “And it’s exploded. The first week she uploaded it, she had a ton of people messaging her, wanting to buy the rights to the video.”

Anyone who watches it might notice a West County Bulldogs hat on the wall rack. While Ben is a 2020 North County graduate, the family moved to the West County School District part of Terre Du Lac around the last part of his senior year. It’s the district his younger brothers, Hudsen and Musse, attend.

Sarah indicated she’s thankful the house was camera-ready, and Ben-ready.

“My mother-in-law lives with us, and she had taken off work, I didn’t know that, and my daughter was there, my two nieces. They kind of helped get the house ready,” Sarah said. “I hadn’t done anything! I thought he was coming the next week, so I hadn’t cleaned or grocery-shopped for it, gotten his room ready, and I wanted to do all those things.

"Morgan knew that I would have wanted that all done before he got home. So after I was hugging him, my next thought was, ‘Ohmigosh, I wanted to do all those things,’ and Morgan told me, ‘It’s OK, we did it.’”

Sarah, Ben and Kaitlyn met for a coffee at RaeCole’s in Park Hills on Wednesday and marveled at how quickly Ben’s time at home, 29 days, had gone.

“That’s where the trick came in, because I didn’t know it was going to be 29 days,” Sarah said. “I guess I really didn’t realize how much I missed him. Nine months is a super-long time to be away. It’s crazy. We’ve had the best month, but it’s gone by so fast.”

It’s been fast – and eventful.

Ben and Kaitlyn, who have been dating for a couple of years, were married by a Justice of the Peace on Monday. The time they’ve spend together will have been a rare commodity since, in two weeks, Kaitlyn, who graduated from North County in 2019, will also be getting her own military experience as she enters the Air Force in about two weeks.

She said she wants to be a mechanic who works on aircraft.

Ben is working toward becoming a rifleman. His senior year at North County he wasn’t sure what he wanted to do. He liked physical exercise, he was a football player. He wondered about finding a union job.

“At first my buddy was going to enlist. He wound up not going, but just talking to him, he was telling me everything about it, and I didn’t know what I wanted to do,” Ben said. “What he was telling me sounded like something I’d be good at and interested in.”

He started basic training at Marine Corps Recruit Depot in San Diego in January, which lasted for three months. Then he started School of Infantry training at Camp Pendleton in Oceanside, California. After his 29 days at home, he’s heading to 29 Palms, California, a Marine base in the desert about three hours from the ocean and an hour from Palm Springs.

Sarah indicated her son is full of surprises — his choice to join the Marines was a bit of a surprise, as well. It wasn’t that he chose the military, it was the branch.

“His dad was Navy for eight years, Ben was actually born in San Diego,” she said. “His grandpa was Navy, his great-grandpa was Navy. So the Dunlaps are Navy men, they’re sailors. So when he came to us, I guess it was March of 2020, saying he was really wanting to enlist in the Marines, I wasn’t expecting it.”

Kaitlyn said, “You know why? Because that was the toughest branch.”

Ben agreed. “Marines are the hardest branch, that’s why I wanted to try it, to challenge myself,” he said.

While it’s been good to be home, he said, so far, he’s loved his experience in the Marine Corps.

“It’s going really great. I’m doing my best out there, and they recognize accomplishments, so it’s pretty easy to stay motivated and work as hard as I can,” he said. “The guys I’ve met there — it’s crazy, I feel like I’ve known them for 10 years already but it’s not even been a year. I’m already going to be a best man at a guy’s wedding. It’s a brotherhood.”

Sarah Haas is the assistant editor for the Daily Journal. She can be reached at 573-518-3617 or at shaas@dailyjournalonline.com.

It wasn't clear if the determination might lead to additional charges against Brian Laundrie, who is considered a person of interest in her disappearance and remains unaccounted for.

""They set out to do it, and they did it," the superintendent said. "It has no place in high school athletics."

Millions of retirees on Social Security will get a 5.9% boost in benefits for 2022, the biggest cost-of-living adjustment in 39 years.

Police: Woman raped on Pennsylvania train as bystanders did nothing

A woman was raped by a stranger on a Philadelphia area train in the presence of other riders who a police official said "should have done something."

U.S. health advisers said Thursday that some Americans who received Moderna's COVID-19 vaccine should get a half-dose booster to bolster protection against the virus.

Advice shifting on aspirin use for preventing heart attacks

ALTAMONTE SPRINGS, Fla. (AP) — Police in central Florida have arrested the father of a toddler who found a loaded handgun in his “Paw Patrol" backpack and fatally shot his mother while she was on a Zoom call for work.

Kaitlyn, Ben and Sarah Dunlap reminisce at RaeCole's coffee shop in Park Hills about the viral video, Ben's 29 days home from his service to the Marine Corps, and about his and Kaitlyn's engagement on Friday and marriage on Monday. 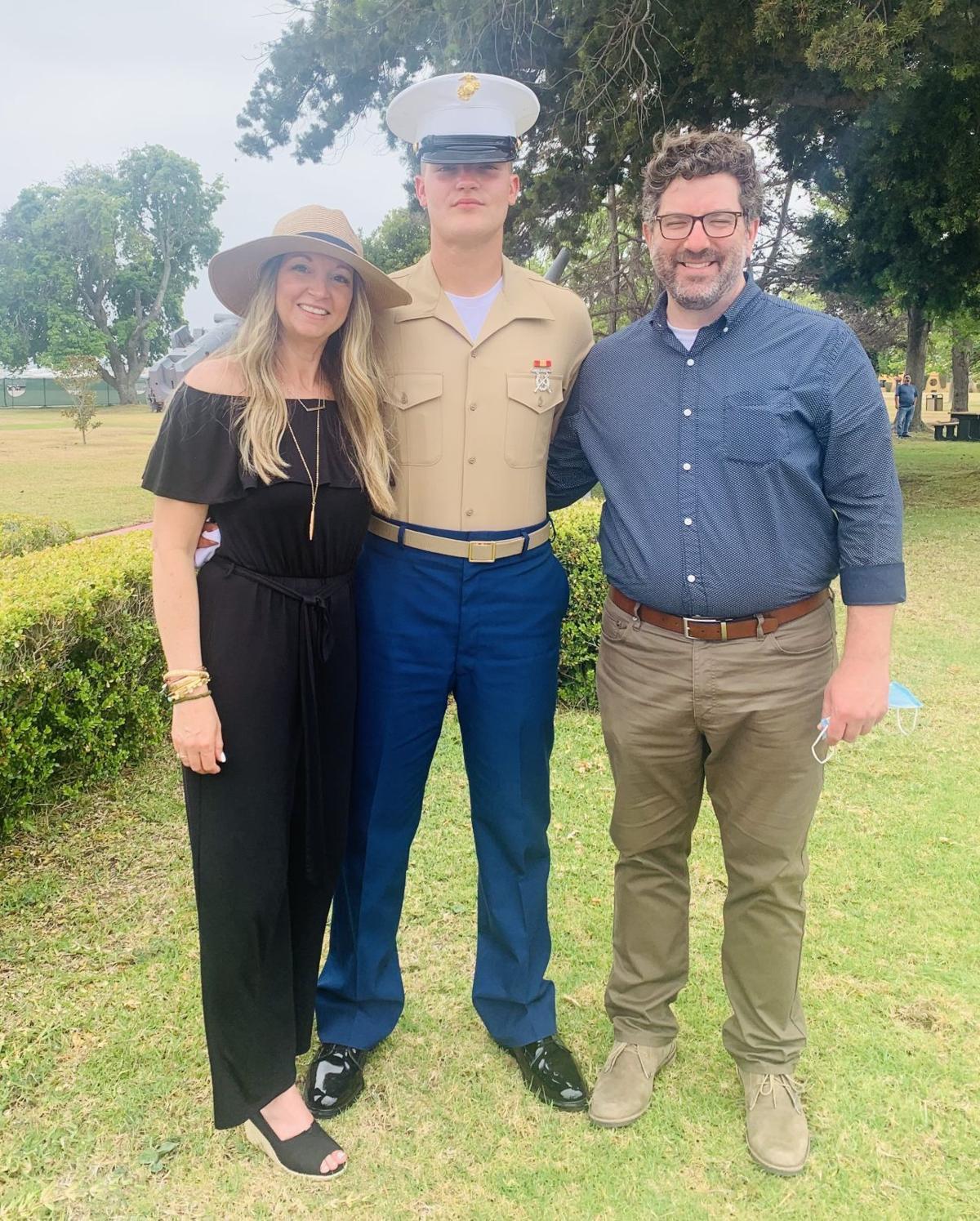 Ben Dunlap, center, poses with his mom Sarah and dad Brian at graduation from his training in the Marine Corps.

Ben and a fellow Marine go through training exercises in California. 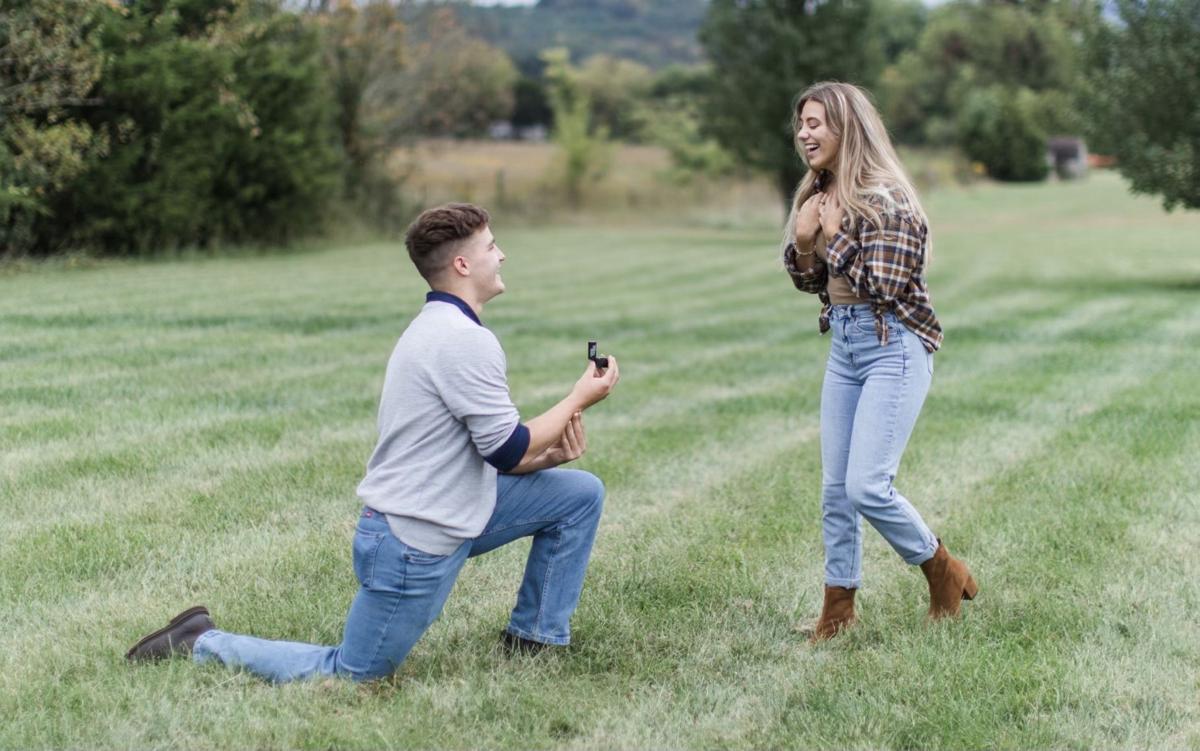 It's been an eventful 29 days' leave from service in the Marine Corps for Ben Dunlap, whose surprise reunion video with his mom went viral, he got engaged to Kaitlyn, right, on Friday and they married before a Justice of the Peace on Monday. He shipped out Thursday. Kaitlyn is set to enter the Air Force on Oct. 19.