Across the country, there's frustration brewing over the ever-presence of tipping.

NEW YORK (AP) — Across the country, there's a silent frustration brewing about an age-old practice that many say is getting out of hand: tipping.

Some fed-up consumers are posting rants on social media complaining about tip requests at drive-thrus, while others say they're tired of being asked to leave a gratuity for a muffin or a simple cup of coffee at their neighborhood bakery. What's next, they wonder — are we going to be tipping our mail carriers and dentists, too?

As more businesses adopt digital payment methods, customers are automatically being prompted to leave a gratuity — many times as high as 30% — at places they normally wouldn't. And some say it has become more frustrating as the price of items has skyrocketed due to inflation, which eased to 6.5% in December but still remains painfully high.

"Suddenly, these screens are at every establishment we encounter. They're popping up online as well for online orders. And I fear that there is no end," said etiquette expert Thomas Farley, who considers the whole thing somewhat of "an invasion."

Unlike tip jars that shoppers can easily ignore if they don't have spare change, experts say the digital requests can produce social pressure and are more difficult to bypass. And your generosity, or lack thereof, can be laid bare for anyone close enough to glance at the screen — including the workers themselves.

Dylan Schenker is one of them. The 38-year-old earns about $400 a month in tips, which provides a helpful supplement to his $15 hourly wage as a barista at Philadelphia café located inside a restaurant. Most of those tips come from consumers who order coffee drinks or interact with the café for other things, such as carryout orders. The gratuity helps cover his monthly rent and eases some of his burdens while he attends graduate school and juggles his job.

Schenker says it's hard to sympathize with consumers who are able to afford pricey coffee drinks but complain about tipping. And he often feels demoralized when people don't leave behind anything extra — especially if they're regulars.

"Tipping is about making sure the people who are performing that service for you are getting paid what they're owed," said Schenker, who's been working in the service industry for roughly 18 years.

Traditionally, consumers have taken pride in being good tippers at places like restaurants, which typically pay their workers lower than the minimum wage in expectation they'll make up the difference in tips. But academics who study the topic say many consumers are now feeling irritated by automatic tip requests at coffee shops and other counter service eateries where tipping has not typically been expected, workers make at least the minimum wage and service is usually limited.

"People do not like unsolicited advice," said Ismail Karabas, a marketing professor at Murray State University who studies tipping. "They don't like to be asked for things, especially at the wrong time."

Some of the requests can also come from odd places. Clarissa Moore, a 35-year-old who works as a supervisor at a utility company in Pennsylvania, said even her mortgage company has been asking for tips lately. Typically, she's happy to leave a gratuity at restaurants, and sometimes at coffee shops and other fast-food places when the service is good. But, Moore said she believes consumers shouldn't be asked to tip nearly everywhere they go — and it shouldn't be something that's expected of them.

Digital payment methods have been around for a number of years, though experts say the pandemic has accelerated the trend towards more tipping. Michael Lynn, a consumer behavior professor at Cornell University, said consumers were more generous with tips during the early days of the pandemic in an effort to show support for restaurants and other businesses that were hard hit by COVID-19. Many people genuinely wanted to help out and felt sympathetic to workers who held jobs that put them more at risk of catching the virus, Lynn said.

Tips at full-service restaurants grew by 25.3% in the third quarter of 2022, while gratuities at quick or counter service restaurants went up 16.7% compared to the same time in 2021, according to Square, one of the biggest companies operating digital payment methods. Data provided by the company shows continuous growth for the same period since 2019.

As tip requests have become more common, some businesses are advertising it in their job postings to lure in more workers even though the extra money isn't always guaranteed.

In December, Starbucks rolled out a new tipping option on credit and debit card transactions at its stores, something a group organizing the company's hourly workers had called for. Since then, a Starbucks spokesperson said nearly half of credit and debit card transactions have included a gratuity, which — along with tips received through cash and the Starbucks app — are distributed based on the number of hours a barista worked on the days the tips were received.

Karabas, the Murray State professor, says some customers, like those who've worked in the service industry in the past, want to tip workers at quick service businesses and wouldn't be irritated by the automatic requests. But for others, research shows they might be less likely to come back to a particular business if they are feeling irritated by the requests, he said.

The final tab might also impact how customers react. Karabas said in the research he did with other academics, they manipulated the payment amounts and found that when the check was high, consumers no longer felt as irritated by the tip requests. That suggests the best time for a coffee shop to ask for that 20% tip, for example, might be on four or five orders of coffee, not a small cup that costs $4.

Some consumers might continue to shrug off the tip requests regardless of the amount.

"If you work for a company, it's that company's job to pay you for doing work for them," said Mike Janavey, a footwear and clothing designer who lives in New York City. "They're not supposed to be juicing consumers that are already spending money there to pay their employees."

Schenker, the Philadelphia barista, agrees — to a certain extent.

"The onus should absolutely be on the owners, but that doesn't change overnight," he said. "And this is the best thing we have right now."

50 most popular chain restaurants in America

50 most popular chain restaurants in America

From the announcement of the Oscar nominees, to coverage of the tragedies that unfolded in California, here are the top national stories from …

Is tipping out of control? Many consumers say yes

Across the country, there's frustration brewing over the ever-presence of tipping. 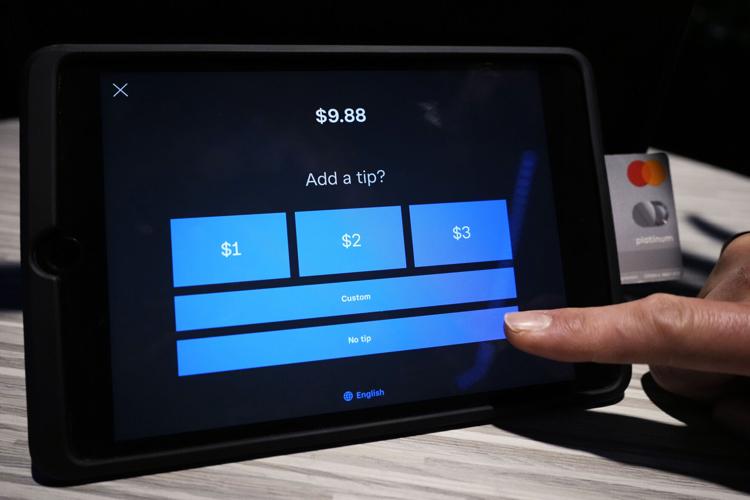 A tipping option is displayed on a card reader tablet at the X-Golf indoor golf in Glenview, Ill., Tuesday, Jan. 10, 2023. 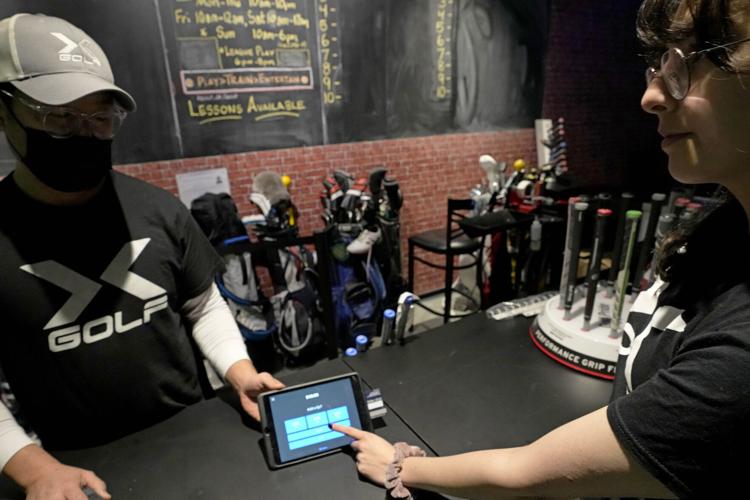 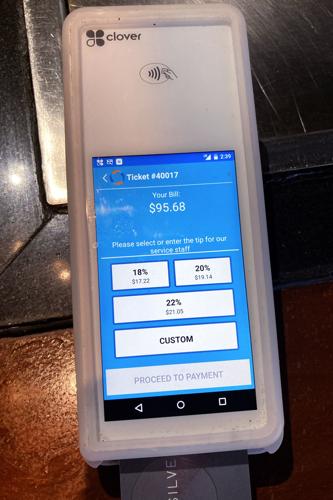 A tipping option is displayed on a card reader at a restaurant in Schaumburg, Ill., Tuesday, Jan. 10, 2023.