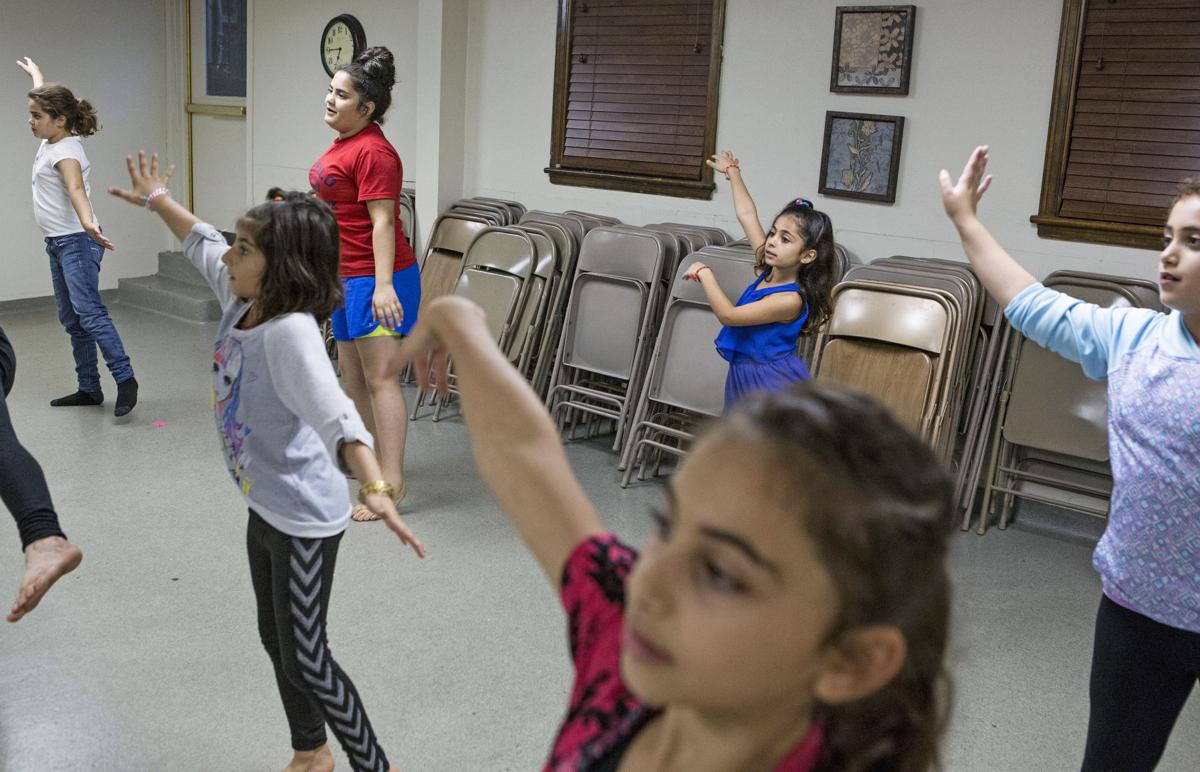 Yazidi girls go through a dance routine during a class at St. Matthew's Episcopal Church. 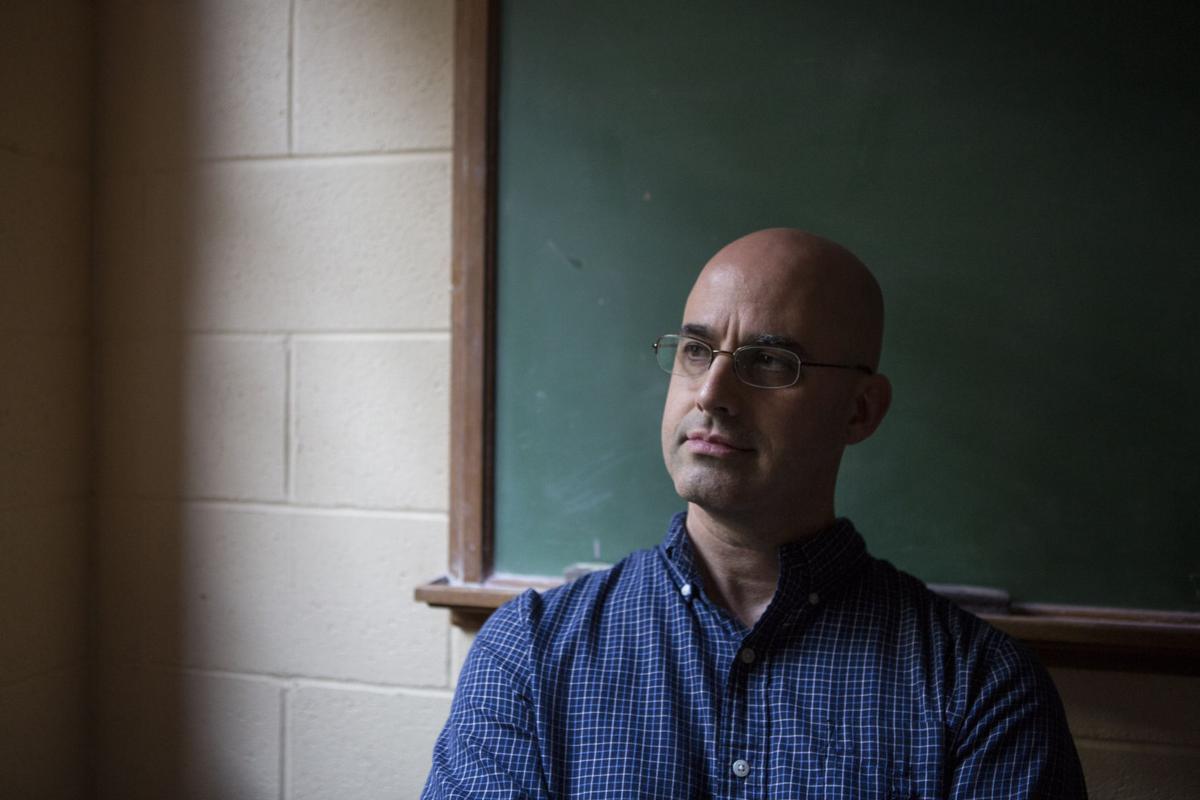 Tim Sandberg has been teaching English to Yazidi refugees since March as part of the Grandma Project at St. Matthew’s Episcopal Church. "What I like most ... is their attitude and sense of humor," he said. 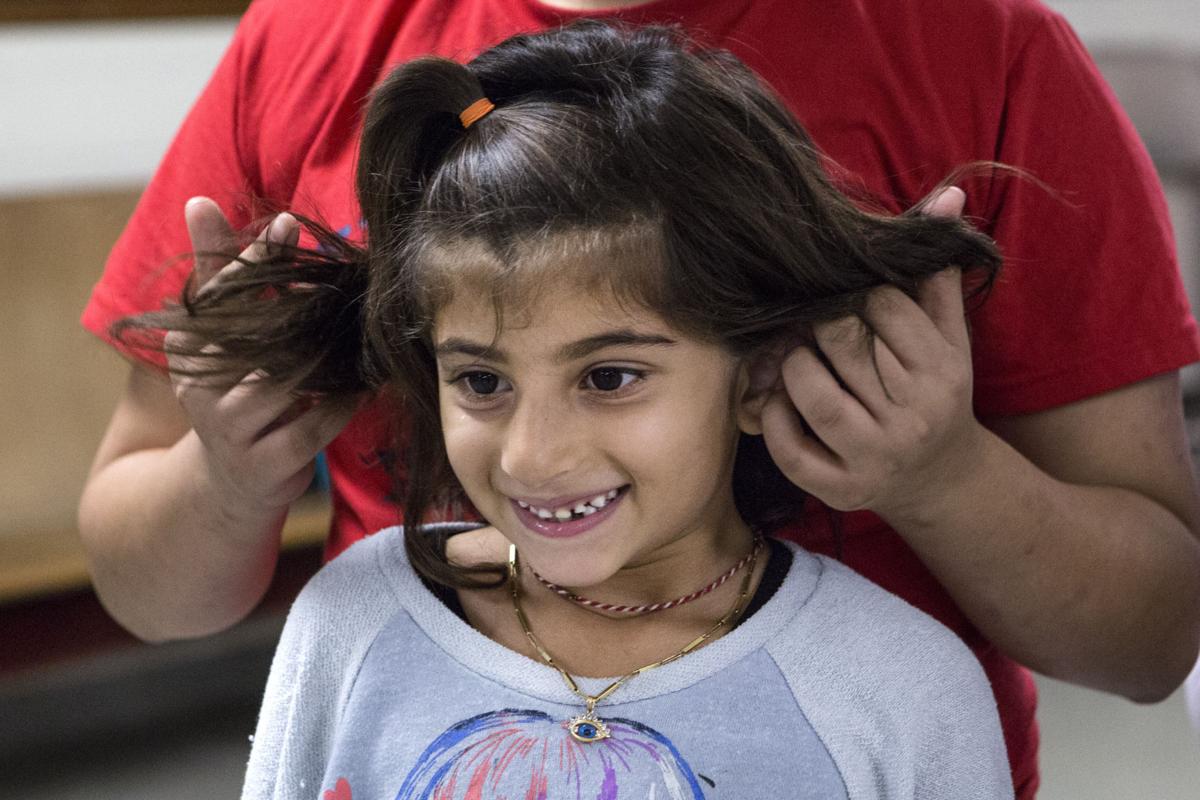 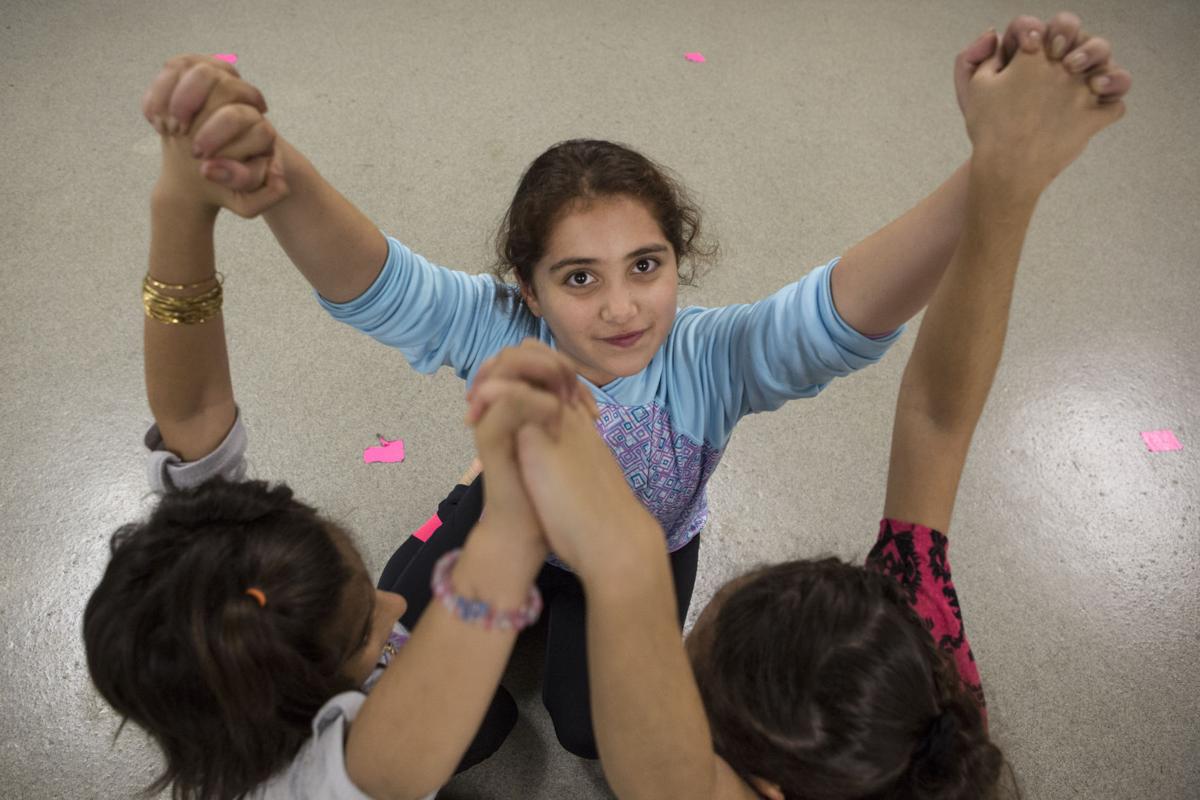 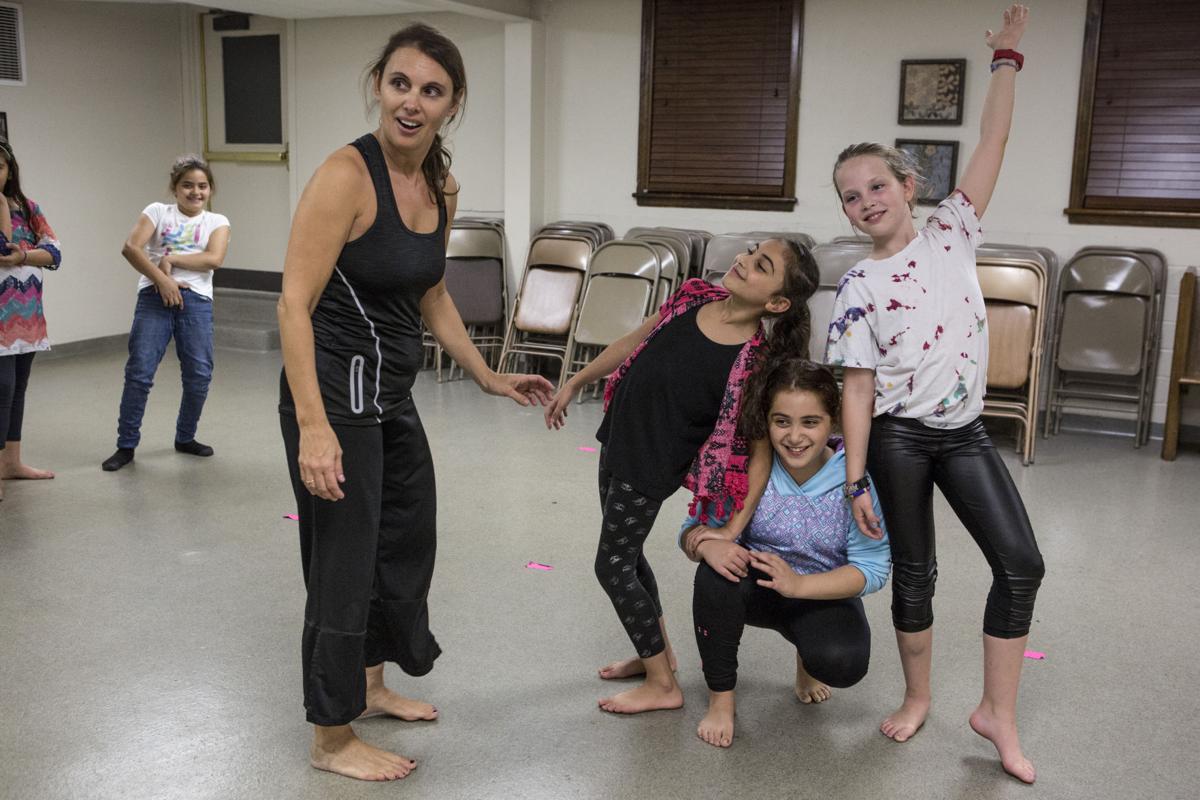 This week it’s dolma, a pan-fried grape leaf stuffed with meat and rice and rolled into something resembling an egg roll, and, like all good potlucks, left warm in a Tupperware container to be dished onto paper plates.

Over the past few months, the aromas of traditional Yazidi fare have been a familiar scent wafting down the hallways of a Christian church in Lincoln.

St. Matthew’s Episcopal, tucked away at 2325 S. 24th St. in the Country Club neighborhood, has hosted Yazidi women and youth for English and dance classes four days a week.

The classes are designed to connect the religious minority targeted by Islamic State extremists in Iraq both to their heritage and culture as well as their new lives in Lincoln.

“This helps them feel home,” said Gulie Khalaf, who through the advocacy group Yezidis International has organized the classes with volunteers from the church.

“The home they used to know is literally in pieces,” she said. “Now this is their home, and it’s a place they can call their home and truly feel it.”

On Wednesdays, as many as eight Yazidi women, some recent arrivals after fleeing the self-declared Islamic State in Iraq, learn English, poring over workbooks with the help of a few dedicated tutors.

The classes start with taking attendance and progress through a warm-up activity led by Tim Sandberg, an education coordinator and senior programs manager at Lincoln’s Asian Community and Cultural Center. Then, the Yazidi women break into groups based on their level of fluency.

After a break during which students and teachers alike enjoy the dolma, one group works to master the basics of English -- the ABCs, the sounds each letter makes and how to string them together into basic words -- while another practices reading fluency and comprehension.

Ultimately, the class aims to give the women tools to navigate their new world, Khalaf said.

They hope to learn little things like recognizing a child’s name on a letter sent home from school or being able to give out an address or phone number and tougher skills like scanning grocery ads.

“We feel like we are mute,” said one woman who asked to be called Laylo for this story. “We cannot communicate with anyone around us.”

Very few Yazidi women went to school in Iraq, making the prospects for getting an education -- especially for those who are now in their 60s and 70s -- intimidating, the women said.

The cultural barrier still exists, but it is being dismantled by their motivation to be independent in a new country, speak to their doctors individually, ask for directions.

Another woman who asked to be referred to as Zaray said being able to say hi to neighbors or respond would help her life.

Their progress has been evident, Khalaf said.

“When they first came, they were almost frightened,” she said. “Now it’s like they own the place. They are smiling and talking to each other and asking the mentors how they are doing.”

The teachers who volunteer have seen each woman’s confidence grow, too.

“They take a lot of pride in completing their work,” said Linda Rabbe, a volunteer and parish member at St. Matthew's. “We introduced writing to them just as a kind of happenstance and they absolutely love it.”

Papers with letters scrawled across them litter notebooks, while pages of activities are filled with answers.

Khalaf said the Grandma Project, as it's called, was originally slated to span eight weeks, but after six months shows no signs of slowing down.

“It just kept going, and it’s part of the week now,” said Meredith McGowan, a retired librarian who volunteers at the church. “It’s something we look forward to and they look forward to.”

Cathy Mueller, a retired English-language learner teacher for Lincoln Public Schools, teaches one group of the women, while Sawsan Elias, a Yazidi nursing student at Southeast Community College, quizzes them on their English while she drives them to class.

“It’s really fun to work with the grandmas,” she said. “I’m looking for more grandmas so we can have a bigger class.”

There are other programs in the Yazidi community and more to come.

On Thursday nights and Saturday mornings, Yazidi kids 6 to 13 have been working on a dance routine in the church basement that reflects Yazidi culture and heritage, Khalaf said.

“They are learning to express themselves and who they are through dance,” she said.

Yezidis International is working on a video for the group’s website.

The unofficial Yazidi headquarters in Lincoln -- St. Matthew’s -- has been happy to oblige the blossoming community in Lincoln, which Khalaf estimated at nearly 1,300 people.

Associate Pastor Steve Lahey said the church recognized an opportunity to fulfill its mission of helping those in need by lending time and talent after nearly a century of keeping to itself.

“What’s the purpose of having a church with gifts if you don’t share them?” he asked.

Lahey said the church is open to the Yazidis to use as they will, including everything from the education and dance classes to worship if they so choose.

The church remains sensitive to the Yazidis, who practice a religion that was 1,000 years old when Jesus walked the earth, Lahey said.

“To push them into something they are not ready for is just wrong,” Lahey said. “All we want to do is allow them to move from within, but the end goal is to have them interested in using our space for worship.”

As more arrive -- Khalaf estimates as many as 3,000 could call Nebraska home in the next few years -- the need for teachers and volunteers will grow, especially for those who have worked with English-language learners or in special education.

“We are really hoping to empower the Yazidis here in the community through education, college prep courses and getting their driver’s licenses,” she said.

One Yazidi woman, a friend of the students studying English at the church, recently passed the Nebraska’s driver license exam, Khalaf said.

“She was the talk of the community.”

Film about China defeating the U.S. set to be highest grossing in Chinese history

This is how decisions light up in the brain

This is how decisions light up in the brain

Nadia Murad took a deep breath and chose her words carefully before pleading to the Yazidi community living in Lincoln.

The Certificate of Appreciation which Raad Mhmdah keeps as a cherished keepsake is dog-eared, bent but not creased, and has an American flag l…

Fleeing ahead of Islamic militants, Jamal Aldakhi escaped the Yazidi enclave of Khana Sor with nothing but the clothes he was wearing.

Wise beyond her years, 'director for a day' brings new program to Children's Museum

Tuesday was supposed to be a joyful day overflowing with happiness, a day for one Yazidi family to reunite after five long years overcoming in…

Planners say no to change sought after Yazidi cemetery planned

Should someone who owns land in the county be able to put a cemetery on it? A dog kennel? An airstrip?

Yazidi girls go through a dance routine during a class at St. Matthew's Episcopal Church.

Tim Sandberg has been teaching English to Yazidi refugees since March as part of the Grandma Project at St. Matthew’s Episcopal Church. "What I like most ... is their attitude and sense of humor," he said.