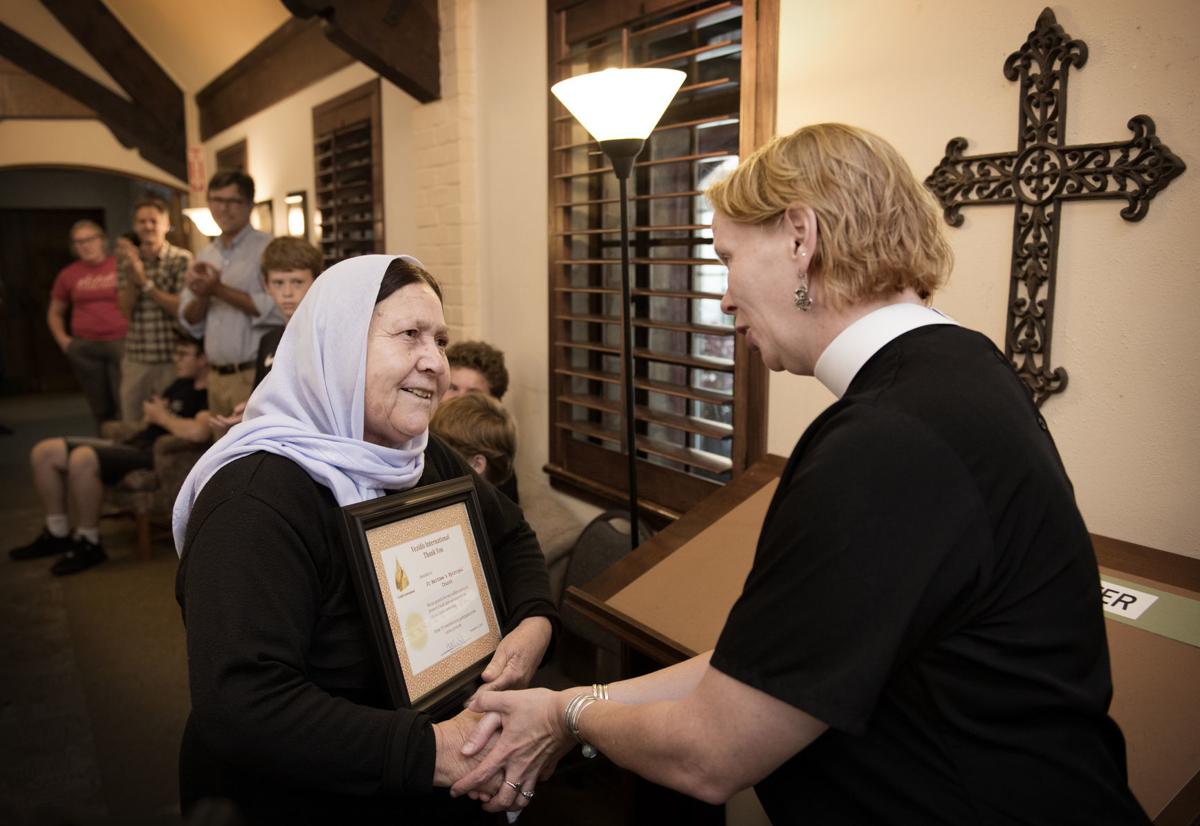 The Rev. Amanda Gott (right) greets Saifi Alkhalty, who presented St. Matthew's Episcopal Church with a certificate of appreciation for taking in members of the Yazidi community. 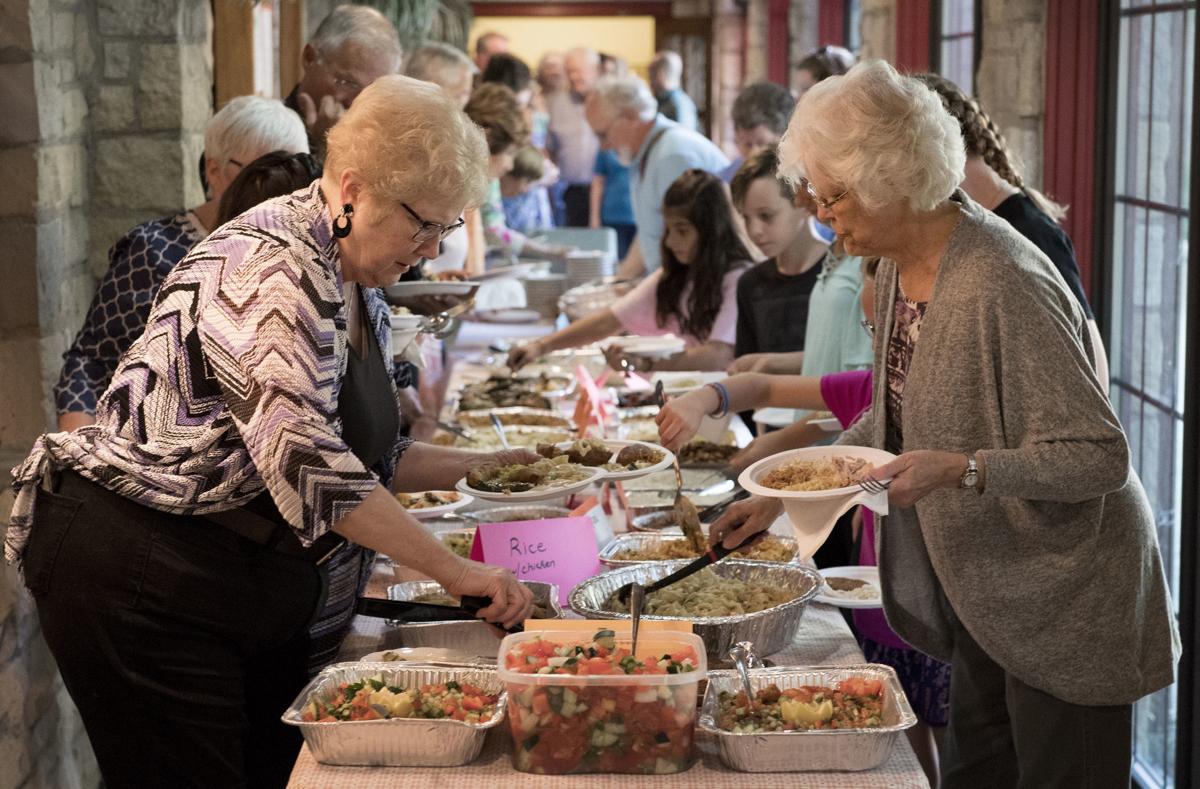 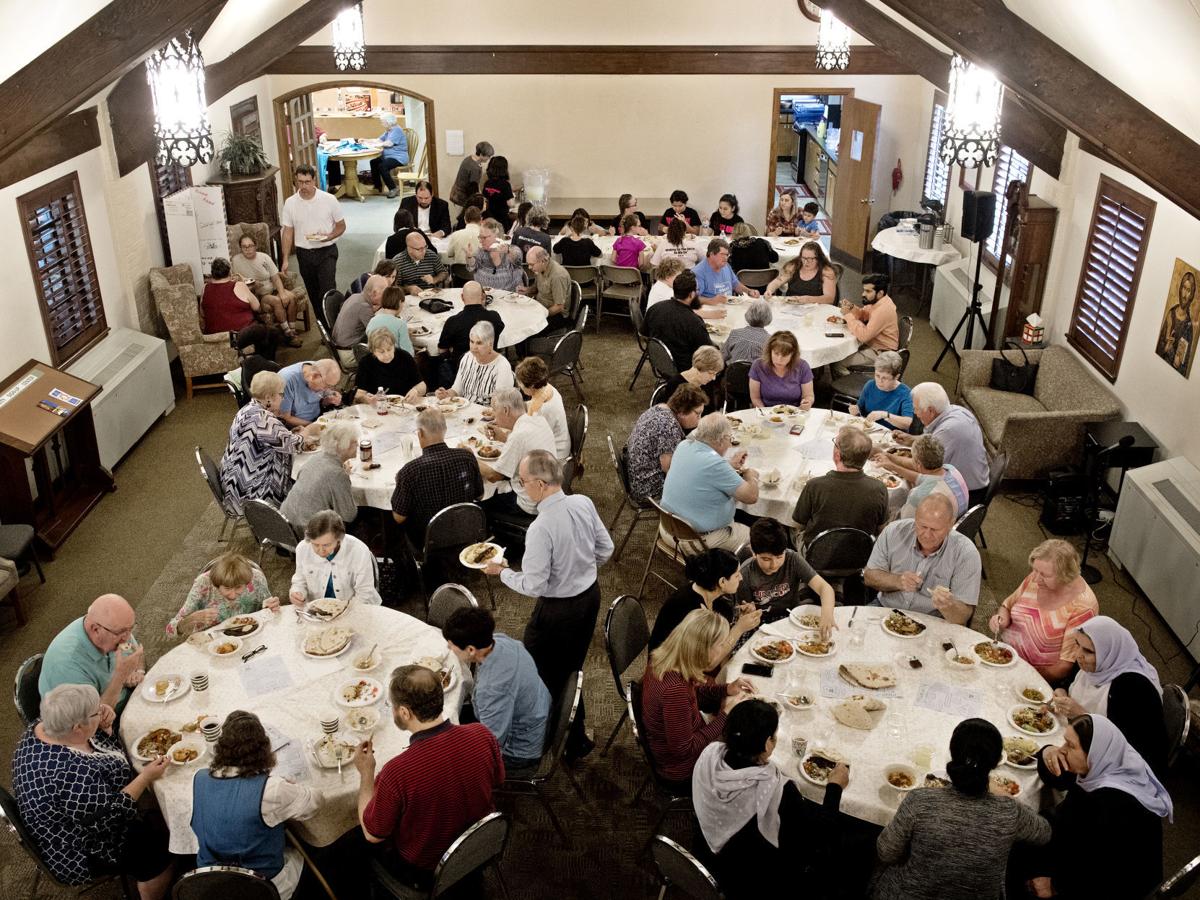 Members of the Lincoln and Yazidi community came together Wednesday during a "thank you" dinner at St. Matthew's Episcopal Church.

Zozan Hskan fled to Sinjar Mountain in northern Iraq with thousands of other Yazidis more than four years ago, witnessing the death and destruction at the hands of the so-called Islamic State along the way.

Hskan's story echoes thousands of other Yazidis who escaped the genocidal campaign by IS against the practitioners of an ancient faith predating both Christianity and Islam, but it's also uniquely hers.

She seized the brief opportunity to slip into Kurdistan, where she was herded into a camp for "internally displaced people," reuniting with her husband and children in the process.

Later, Hskan risked a return to Iraq with her husband, who had worked as interpreter for the U.S. Army like so many other Yazidis, so the family would not have to restart their visa application.

And like hundreds of others who escaped execution or slavery imposed by IS beginning in 2014, Hskan landed in Lincoln just over a year-and-a-half ago, then the newest in what is the largest community of Yazidis in the U.S.

"I'm very happy I live in America, in Lincoln," Hskan said Wednesday night at St. Matthew's Episcopal Church. "I love it here, it's very good for the Yazidi people."

A big part of the "good for the Yazidi people" has been St. Matthew's, which has served as a school and an unofficial Yazidi community center for nearly three years.

The Yazidis offered their thanks to St. Matthew's on Wednesday evening, cooking a spread of Middle Eastern staples for nearly 60 members of the congregation and presenting a certificate of appreciation to the church.

Gulie Khalaf told Wednesday's gathering the celebration was one of resilience, recognition for the hard work and determination shown by the Yazidi women who take part in the "Grandma Project" at the church, which connects them with tutors to learn English two nights a week.

Even without any previous literacy skills, the women have gained reading skills, while at least one is reading at a fourth-grade proficiency, Khalaf said. They've also learned to use a computer, made connections to community partners like Lincoln Public Schools and the Lincoln-Lancaster Health Department, and even earned driver's licenses.

Wednesday's celebration was also one of friendship, including among the Yazidi women, many of whom did not know each other before settling in Lincoln.

Khalaf joked that none of the women knew how to write letters or numbers before starting classes, but newly formed friendships pushed them.

"Next thing you know, they are writing their (phone) numbers and passing them out," she said.

More broadly, the friendships between the Yazidi community and the Christian church, which has stood at 2325 S. 24th St. in the Country Club Neighborhood since 1927, was worth celebrating, Khalaf said.

St. Matthew's opened its doors to the Yazidis, giving them a place to safely gather, without expectations or pressure to convert to their religion.

It was simply an opportunity to lend aid to a people in need, said Amanda Gott, head pastor at St. Matthew's.

"When people who have been through unspeakable horrors come to you and say, 'Can we come into your building and use it to help people rebuild hope,' there's only one right answer," Gott said.

The Yazidi community has become an important part of St. Matthew's life as a congregation, she added, deepening as meaningful relationships have been built.

Richard Quinn, a retired professor of English at Nebraska Wesleyan University who now volunteers as a tutor for the Grandma Project, said the experience has broadened his perspective on the world.

"Their world was destroyed and they are making a world here, and I've come to respect them for their resilience," Quinn said.

When the Yazidis were learning some of the oddities of the English language — that "gh" and "ph" can both make an "f" sound, for example — Quinn said the woman he tutors, Queseema Ali, picked it up right away.

"She said, 'Oh, I know that — pharmacy,'" he said. "It's hard to move into another culture without speaking the language, but I've been impressed."

Before the Grandma Project, Quinn said he was unfamiliar with the Yazidi religion and culture, but Ali has taught him what a thoughtful, intelligent and fun people they are.

Ali said she never expected to find a community like St. Matthew's: "They've been so good to us."

MALCOLM — At the base of a hill on the edge of a 20-acre field covered by low weeds, 250 people gathered under and around white tents to celeb…

All aboard: Boomer mom from Lincoln, millennial son ride the rails

The Hope Venture helps the disadvantaged living in India, Kenya and Uganda

As a teacher and a mother to four boys, Cynci Petersen couldn’t ignore the poverty she witnessed when she traveled to India, Kenya and Uganda …

It was a routine patrol for Iraqi police and their U.S. 10th Special Forces Group attachment to enforce a nighttime curfew west of Mosul in Se…

President Donald Trump's announcement late Sunday that the U.S. would withdraw its forces from Syria could be devastating for the region and t…

The Rev. Amanda Gott (right) greets Saifi Alkhalty, who presented St. Matthew's Episcopal Church with a certificate of appreciation for taking in members of the Yazidi community.

Members of the Lincoln and Yazidi community came together Wednesday during a "thank you" dinner at St. Matthew's Episcopal Church.