Wild woods: House in the country swallowed by city, trees and time
View Comments
Share this
{{featured_button_text}}
1 of 6 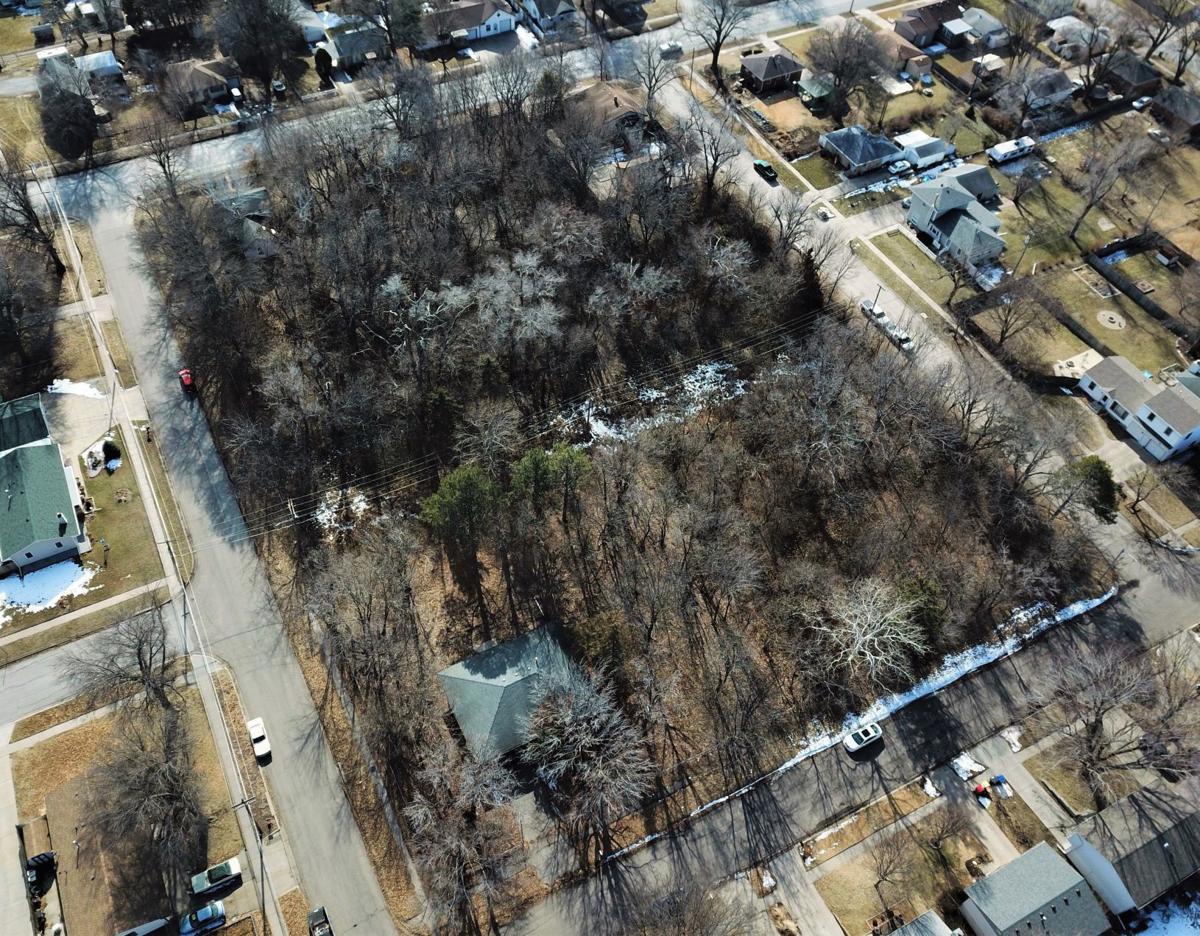 An overgrown block near 48th and Holdrege streets has been drawing complaints for decades. This photo looks south over the property, with Holdrege Street across the top. 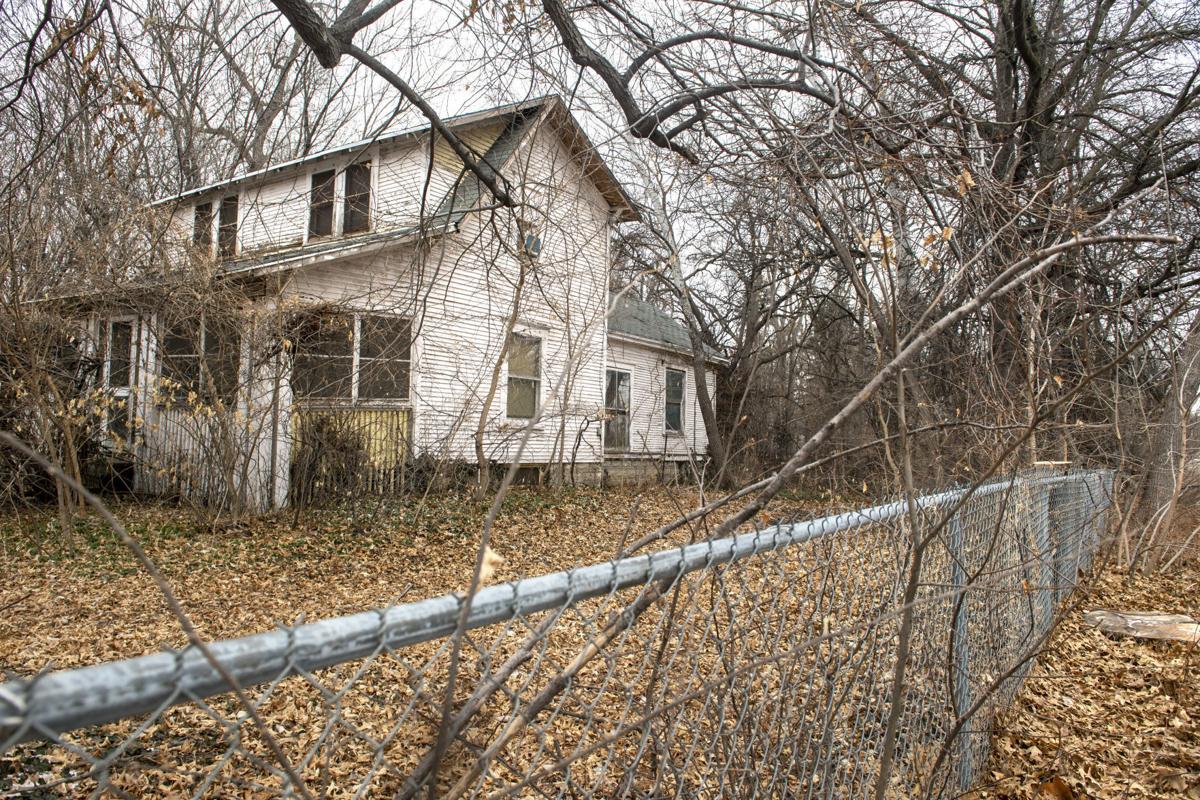 The overgrown trees around a house on the corner of 52nd and Holdrege streets. 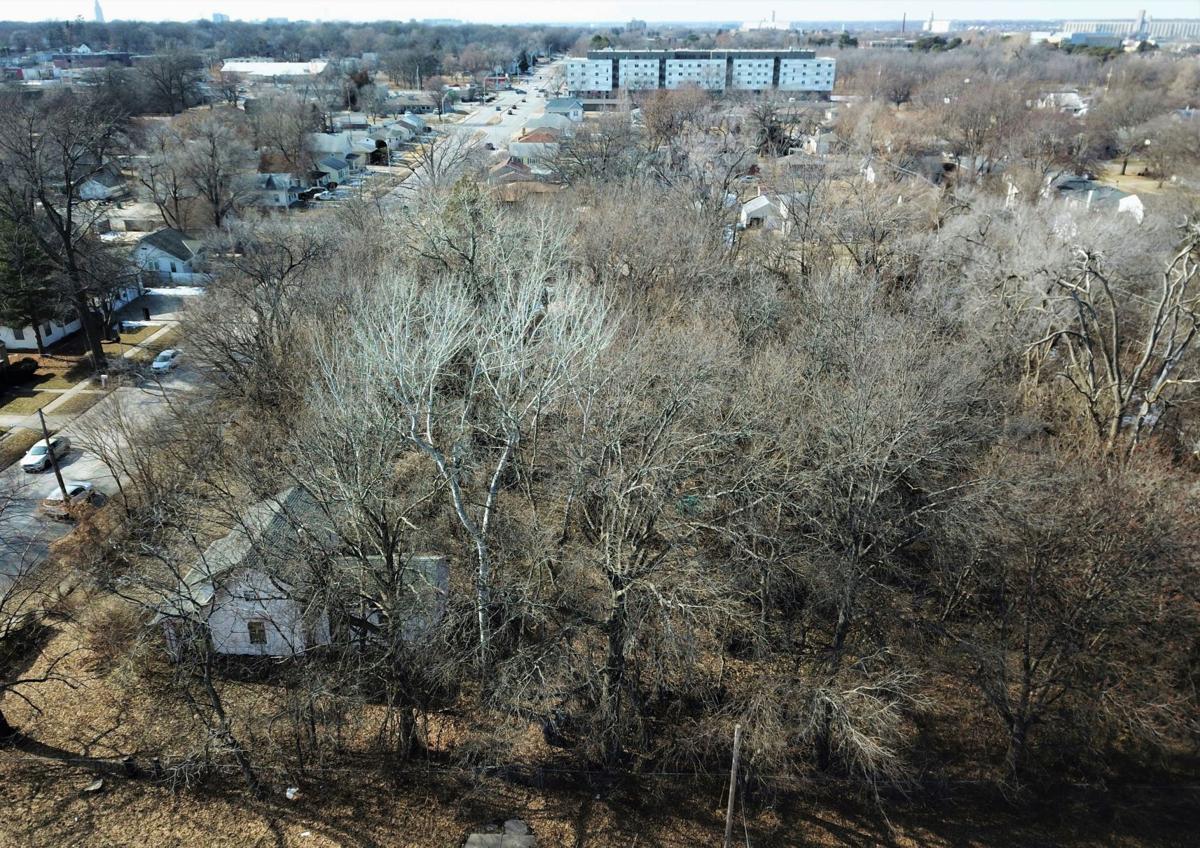 The property looking west toward 48th Street. At the top of the photo, a few blocks away, is the Square at Forty-Eight apartment complex, which was completed in 2017. 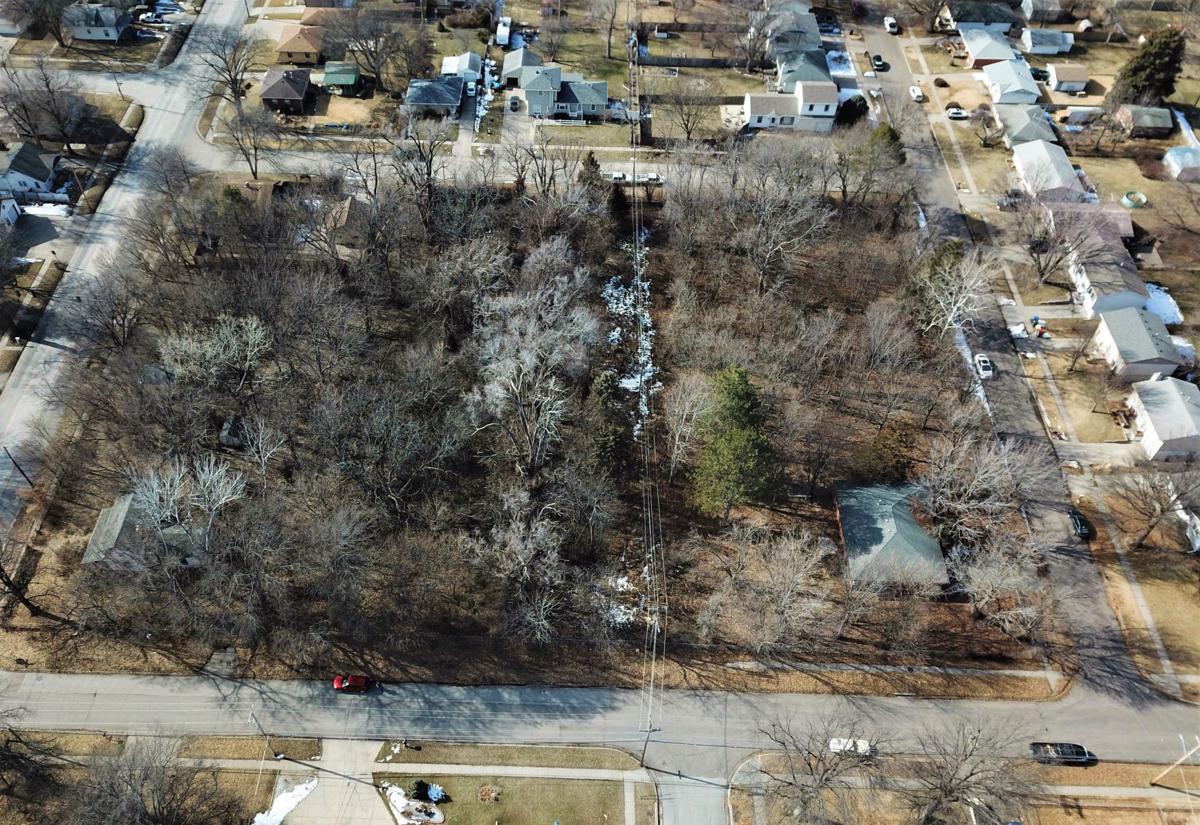 The property looking west, with 52nd Street across the bottom and Holdrege Street on the left. 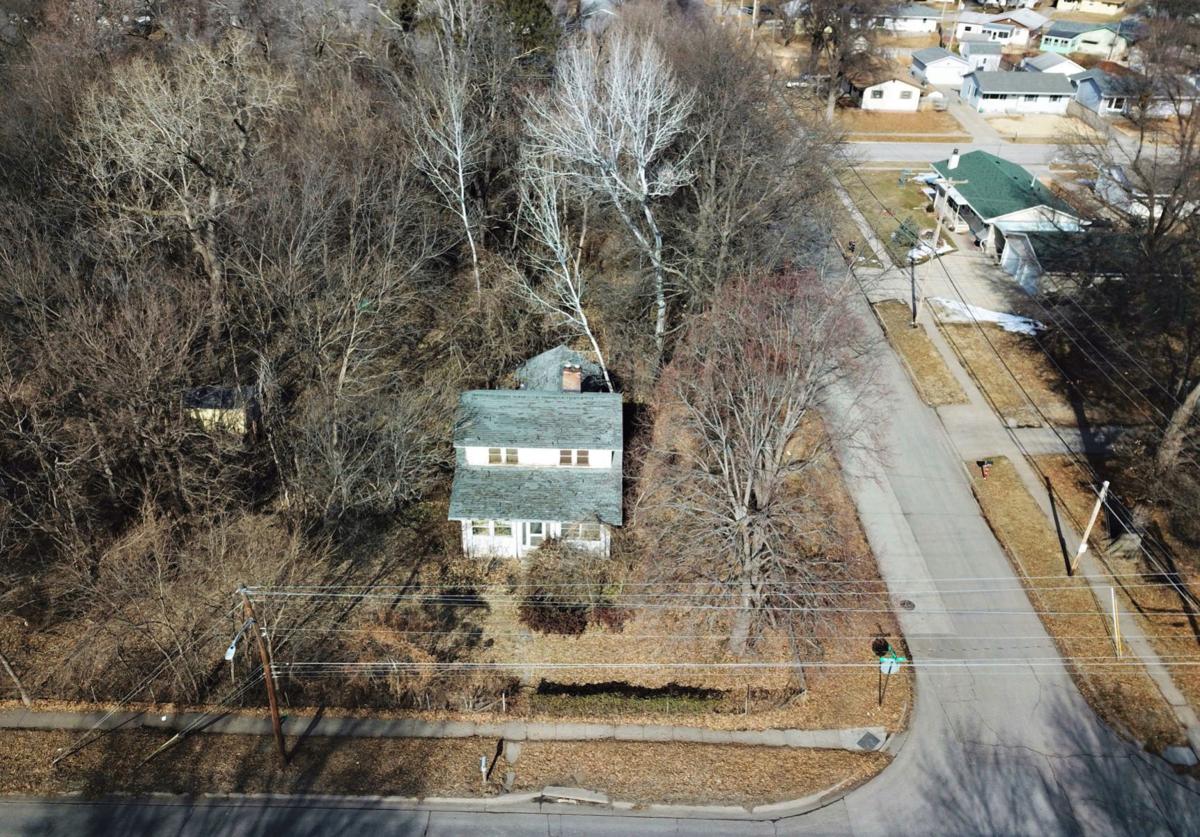 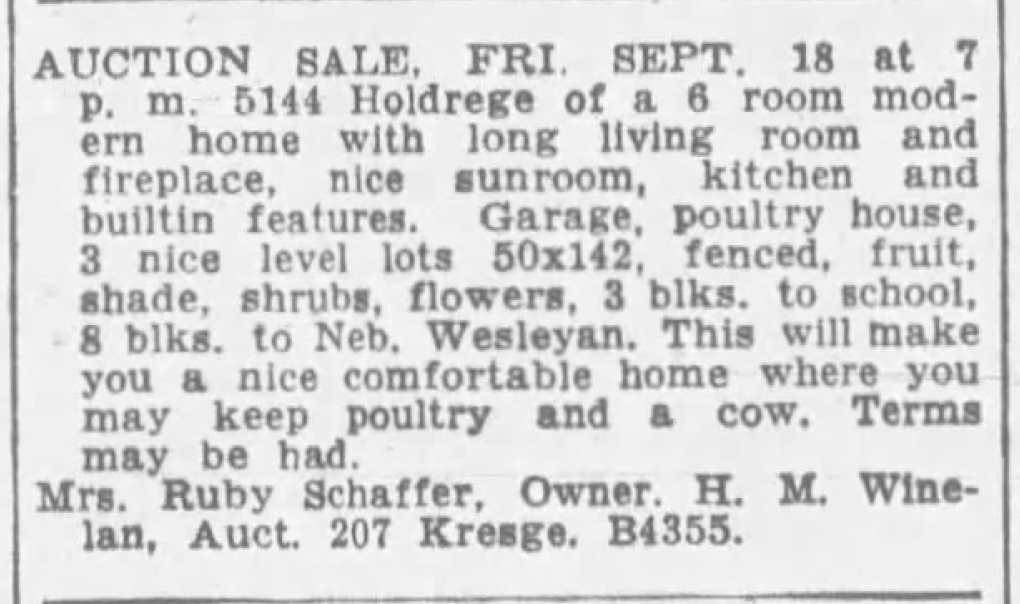 This 1936 clipping from the Lincoln Sunday Journal and Star advertises the property at 5144 Holdrege Street.

The block at 51st and Holdrege streets wasn’t always an urban jungle, hiding a pair of houses behind a tangle of trees and keeping city inspectors busy for nearly 40 years.

An auction notice in the paper described 5144 Holdrege as modern, with six bedrooms, a sunroom and built-ins, on three level lots just blocks from a school.

“This will make you a nice comfortable home where you may keep poultry and a cow,” the advertisement concluded. “Terms may be had.”

John Worrest bought the property for his wife.

He was a city boy, born in Philadelphia, who started work at Cushman Motor Works as an apprentice machinist and retired 50 years later as a divisional superintendent.

“He liked machinery better than horses,” said his youngest son, James. “But my mother was a farm girl.”

Olga Sterner was born in Bradshaw and became a nurse at the Bryan School. But her passion was plants. The house with the big yard was for her, for her gardens, as was the rest of the land they would buy on the edge of the city. Almost that entire city block, and then more nearby.

For decades, she was a perennial winner in the Garden Club of Lincoln and Cornhusker Rose Society shows, collecting first-place ribbons for her long-spurred aquilegia, French-double lilacs, medium-red roses, flowering trees.

She earned her nursery license. She served as garden director at Riley Elementary School. She raised chickens and geese.

“She liked to get out,” James Worrest said. “My father ran a tractor to dig up the land to make her happy.”

Their youngest son used to stand in the shadow of a big steel sign along Holdrege, when it was still gravel, selling his mother’s sweet corn and peonies.

John Worrest died in 1970, Olga in 1993. Their oldest son, Allan, would end up in the old house on Holdrege, James in a house behind him on Aylesworth Avenue.

And then the trees took over, growing into the space between them, and the space all around them, and they kept growing. Filling their mother’s gardens, shielding their homes from the street.

“He (Allan) doesn’t want to take care of it, and I never took care of it. And that takes care of that.”

The first warning came in 1983, as a legal notice in the newspaper: The property’s bushes posed a sight obstruction for vehicles. Clean it up or the city will.

Another published in 1985, and eight more complaints were made to the city since 1996, most of them from neighbors complaining about the overgrown appearance of the property, but most of them unenforceable under city code.

“Unfortunately, a lot of times people file complaints because they look at it as a beautification code, and it’s not,” said Sean Stewart, the city’s chief housing inspector. “It’s a property maintenance code. Overgrowth is not necessarily detrimental to a building or a lot.”

And cases such as this are subjective, he said: How do you distinguish a weed tree from one purposely planted?

The county weed control authority does, and it’s familiar with the block, dispatched to complaints against the brothers’ Holdrege and Aylesworth addresses as recently as August.

But neither visit required the authority to take enforcement action — meaning either the brothers resolved the problem, or the inspector found no violations, it said.

Still, the complaints kept piling up:

“This property is an eyesore to the neighborhood and dangerous to the environment.”

And: “I have complained about this house for two years. Why do we have to put up with it for so long?”

Diane Mayes has no complaints. Since 2003, she’s shared the block with the brothers — her house on its southwest corner is the only parcel they don’t own, free of front-yard trees and clearly visible from the street.

“I don’t know much about them; they keep to themselves,” she said. “They occasionally have a tree trimmer come out and take a tree down, but not too many.”

One of “the boys” used to blow the snow from her sidewalk, and she appreciated that.

Early on, she would get animals in her yard, she said. Raccoons, rabbits, even a deer once.

“But they don’t bother me now that I got a big fence up.”

In court, and on the market

In 2017, Stewart fielded a report that stood out among all the complaints of overgrown bushes and unsightly trees:

“Paint peeling off half of house … looks deserted.”

That could be enforceable, and the housing inspector took a look. He found deteriorating paint, rotting soffit and fascia, a hole in the roof.

He sent a notice of violation, with a deadline to get the house up to code. Nothing happened, so he sent another.

The brothers told him they were trying to sell the property, so Stewart was patient, giving them until July 2018.

“I gave them an ample amount of time,” he said.

Another year passed without repairs, so he forwarded the case to the city attorney’s office, which charged the brothers in October for inadequate maintenance of a building. They are scheduled to appear in court next month.

But they can go further. Ultimately, the city could seek an injunction, allowing it to repair the house and place a lien against the property and, after that, foreclose.

It might not reach that point. Last month, a for-sale sign appeared on the edge of the property.

The brothers decided to let go of a little more than 2 acres, including the old house on Holdrege, for $549,000. They plan to keep three lots on the Aylesworth side.

It’s time, James Worrest said. The brothers grew old in their childhood home, the city grew up around it, the trees grew out of control.

He knows they draw complaints, but it’s not so bad. The block isn’t full of animals, he said, and he’s never seen deer.

“But the buzzards like them. They like to roost up there; it’s fun to watch them fly. We don’t give them a hard time.”

It’s an unusual property to sell, said Jim Austin, an agent with Home Real Estate. That much land in the middle of the city, that many trees.

Still, he said, he’s had plenty of calls. “It’s going to be a project. It will take a special person to come in and do it, but I’m sure someone will.”

One block of E Street, two problem properties — and a nonprofit's plan to offer affordable housing

Gutted to the studs, with holes in the roof above, a collapsed basement below and squatter trash strewn all over, the house at 1120 E St. seem…

Lincoln neighborhood leaders have sounded the alarm about a state proposal seeking to allow duplexes, cottage clusters, town houses, triplexes and quadplexes in residential areas that have limited them locally.

'It's eerie' — Lincoln East grad living under quarantine in China

They talk to their son at least every other day now, sometimes daily, narrowing the 7,000 miles between their home on Cooper Court and his apa…

During an eight-day expedition, a 65-year-old Lincoln woman recently climbed to the top of Africa's highest mountain.

An overgrown block near 48th and Holdrege streets has been drawing complaints for decades. This photo looks south over the property, with Holdrege Street across the top.

The overgrown trees around a house on the corner of 52nd and Holdrege streets.

The property looking west toward 48th Street. At the top of the photo, a few blocks away, is the Square at Forty-Eight apartment complex, which was completed in 2017.

The property looking west, with 52nd Street across the bottom and Holdrege Street on the left.

This 1936 clipping from the Lincoln Sunday Journal and Star advertises the property at 5144 Holdrege Street.