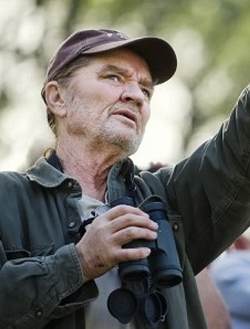 This past spring marked Dave Titterington’s ninth year co-teaching an Osher Lifelong Learning Institute class through the University of Nebraska-Lincoln. Here he leads students on a bird walk. 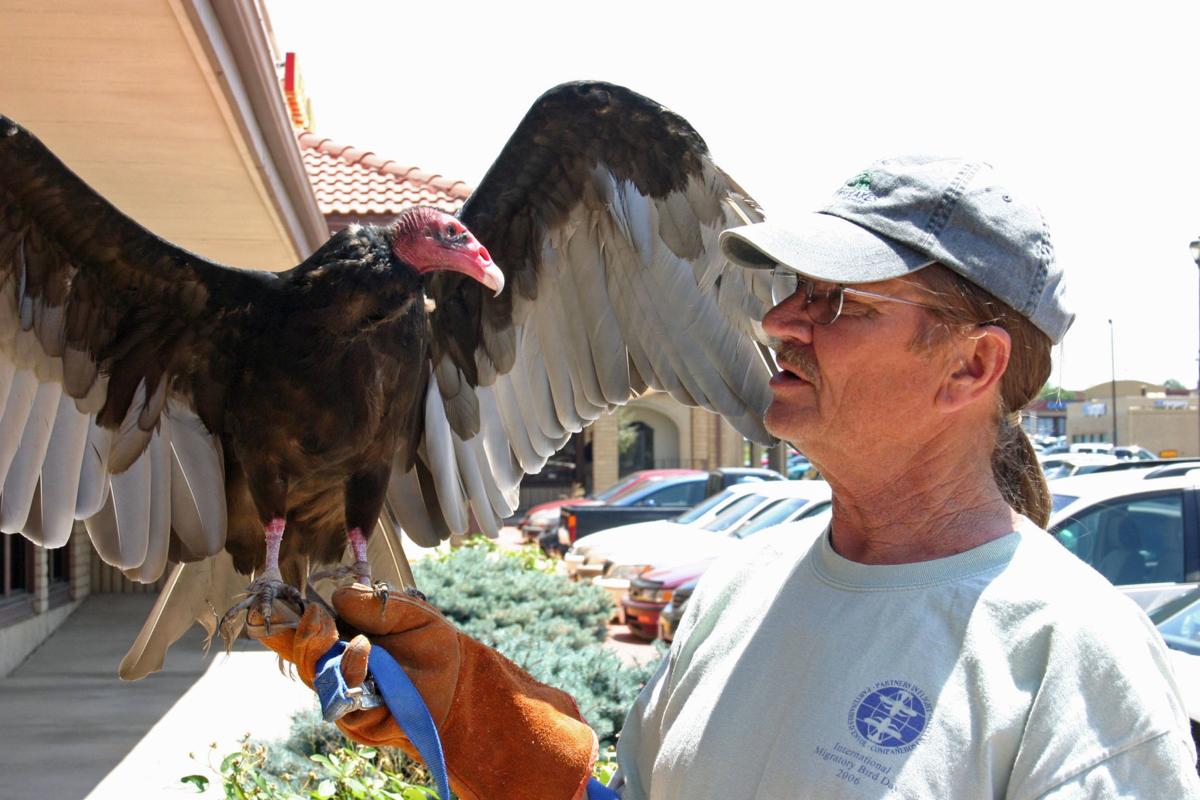 Wild Bird Habitat store owner Dave Titterington handles a turkey vulture during a presentation. He is a rescuer for Raptor Recovery Nebraska in Elmwood, and his business has raised more than $14,000 for the organization. 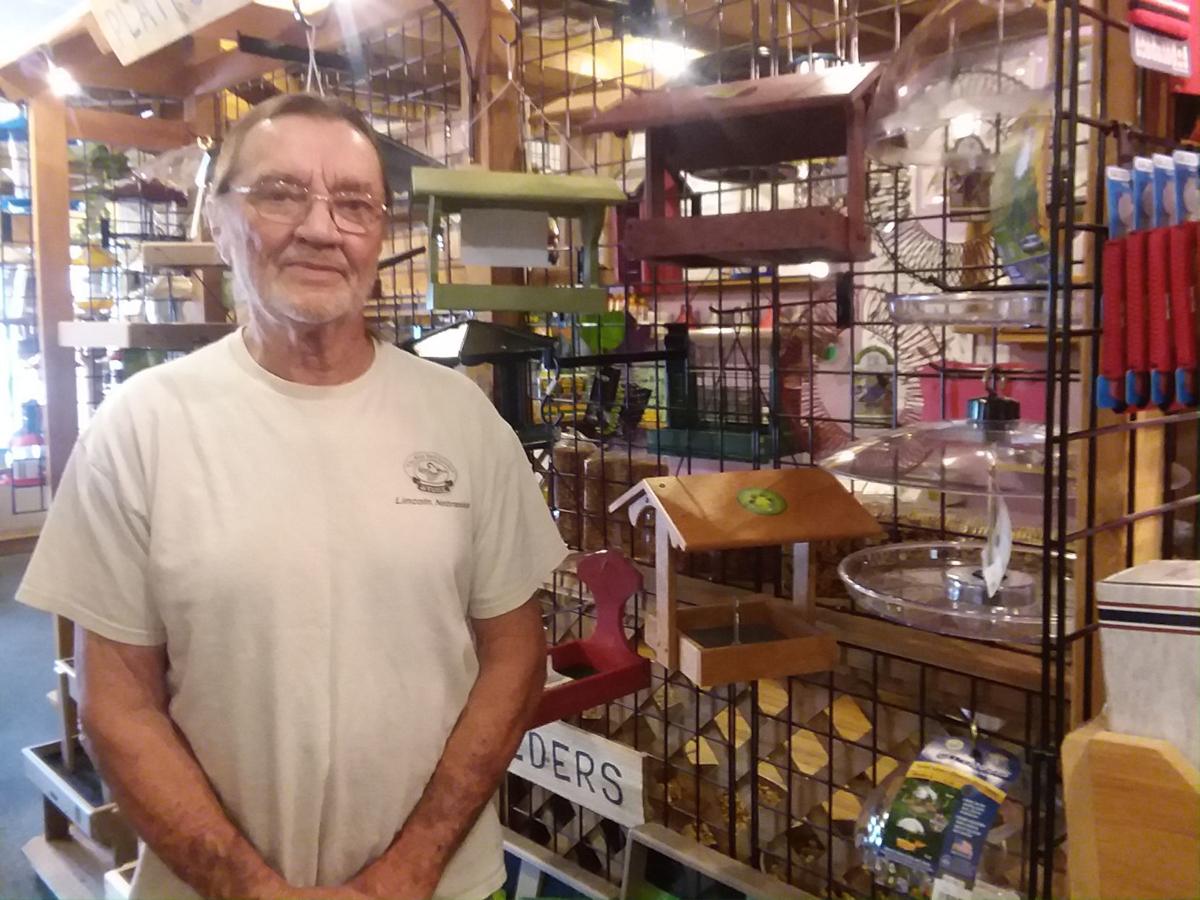 For Dave Titterington, pictured here at his south Wild Bird Habitat store, birding is not just a business, it’s a way of life.

A recycled pop bottle bird feeder he constructed with his youngest daughter at a Girl Scout outing drew Dave Titterington to birding.

Not wanting to disappoint April, he hung the feeder in their yard and started to take notice of different bird species, like house finches and chickadees. Six years later an unfruitful search for bird seed prompted him to open his own store. Titterington, 68, found that local nurseries and hardware stores focused on bird seed sales primarily in the winter months.

But he wanted to buy it year-round and figured he wasn’t the only one. So he opened Wild Bird Habitat in north Lincoln in 1993, then added a south location in 1994. Between the two stores he sells an average of 14,000 pounds of bird seed a week.

Titterington’s interest in birds extends beyond retail to education and conservation. Early on Titterington acquired most of his knowledge about birding from books, his customers and a product distributor in Cedar Rapids, Iowa. Later he worked alongside Pioneers Park Nature Center staff members Peg Fletcher and bird banding expert Irene Alexander.

For 10 years he chaired the Nebraska Birding Trails Committee, a group he helped found to promote Nebraska birding. In 2006 he was honored with the Howard Wiegers Outstanding Wildlife Conservation Award.

His impact has been felt at the community and state levels, as he’s worked with the city, natural resources districts, Nebraska Game and Parks Commission and state Division of Travel and Tourism. He also has collaborated with the School of Natural Resources at the University of Nebraska-Lincoln.

“It generates a tremendous amount of economic development,” Titterington said of the birding industry, which generates between $70 and $80 billion a year and is believed to be the second-largest outdoor activity in the United States behind gardening.

While running his stores, Titterington spent 11 years as a teacher and naturalist at the Pioneers Park Nature Center, assisting with tours, land management and animal care. In 2002 he received the Edna Shields Sharing Nature with Children Award for his work there.

Fletcher, who trained new guides, said Titterington was able to relate well to children, get their attention and share his excitement.

“It just comes naturally,” she said. “It just flows out of him. He was amazing, and he was amazing because he loved what he was doing."

Even though Titterington is no longer on staff at the Nature Center, his stores continue to support its programs and special projects, like the Irene and George Alexander Bird Garden. Titterington organized and co-funded installing wildlife plantings, bird feeders and a pondless waterfall.

Since 1997 he has guided a Mother’s Day Bird Walk at the park. This past May he spotted 52 bird species during the 45-minute tour. He also led sandhill crane tours for the Nature Center for several years.

Raptor rescue got added to his list of interests along the way. Titterington and his wife, Linda, often pick up injured birds and take them to the Raptor Recovery Center in Elmwood. His business has raised more than $14,000 for the organization, and Wild Bird Habitat has also donated thousands of dollars of bird-watching equipment to the Nature Center and Scouting groups.

In 2009 Titterington was approached by longtime customer Dan Wheeler to co-teach an All About Birds course through the Osher Lifetlong Learning Institute at the University of Nebraska-Lincoln. Each spring Titterington spends six weeks educating older adults and taking them on guided bird tours, including a trip to Fletcher’s acreage east of Lincoln.

“I value him tremendously, not only as a friend but as a community resource,” Wheeler said. “He really reaches out to try to inform people.”

The business was awarded best retailer of the year at the 2015 Wild Bird Expo for its efforts to advance the hobby of birding and the birding industry by educating customers, merchandising and marketing wild bird products and impacting the community with an appreciation for birds and nature.

”Probably half of what we do is education,” Titterington said.

Some of his favorite events to help with have included a program in Grand Island featuring Greg Miller, a top contestant for the annual bird sighting contest that the movie “The Big Year” is based on, and bringing “The Messenger,” a Canadian documentary about the loss of songbirds over the past 50 years, to the Ross Media Arts Center.

More recently Titterington’s oldest daughter, Katie, took over managing the stores so he can continue to do the outreach part, he said.

Outreach and education has grown his business and sparked interest from others wanting to open independent birding stores. Titterington has helped open stores in six different states and one Canadian province.

Hillcrest shoe repairman has a century's worth of stories to tell

Foch Clark is a man of many names.

A small, green plant that was almost certainly brewed in the last beer you drank is the focus of this year’s Pioneers Park Herbal Festival.

Make being stuck at home for the birds

You’re staying at home, hardly going anywhere except for essentials. There’s not a lot to do. Or is there?

This past spring marked Dave Titterington’s ninth year co-teaching an Osher Lifelong Learning Institute class through the University of Nebraska-Lincoln. Here he leads students on a bird walk.

Wild Bird Habitat store owner Dave Titterington handles a turkey vulture during a presentation. He is a rescuer for Raptor Recovery Nebraska in Elmwood, and his business has raised more than $14,000 for the organization.

For Dave Titterington, pictured here at his south Wild Bird Habitat store, birding is not just a business, it’s a way of life.