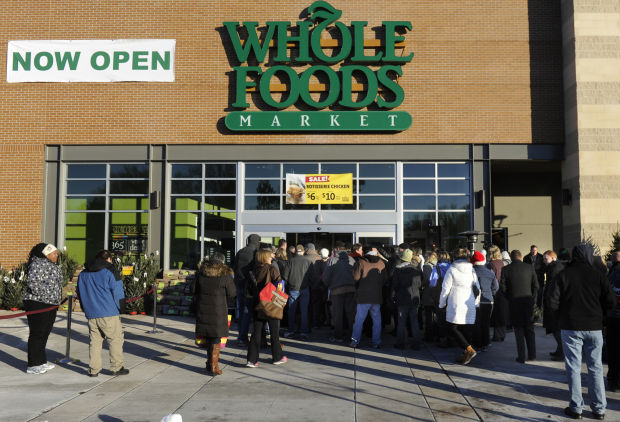 Whole Foods Market at 61st and O streets was one of the major new retailers to open in Lincoln in the second half of 2013. 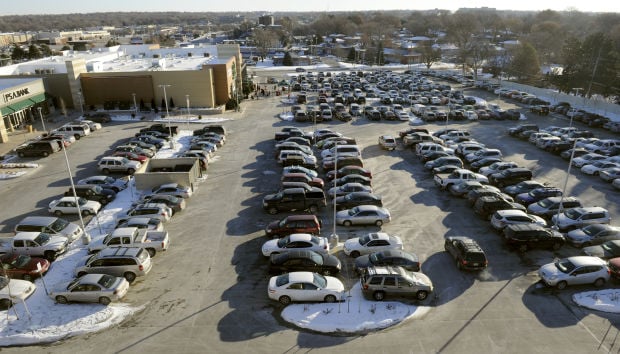 The parking lot outside Whole Foods Market was full when the store opened at 9 a.m. Wednesday, but spots had freed up within an hour.

Marlene Watermeier got up at 5 a.m. Wednesday to make sure she got to 60th and O streets by 8.

She's from Burr. And it was was brrrr — 8 degrees — when she got to Whole Foods Market's opening, which completes the mixed-use development now known as The District at O Street.

Lincoln Public Schools and five businesses now occupy the redeveloped site of the LPS district office that burned down in May 2011. Chipotle, Jos. A Bank, Massage Envy and Sleep Number Beds opened earlier this fall. LPS employees moved into the new district office in July.

More than 200 people who came for the Whole Foods opening overflowed parking spaces at the site, sending cars onto residential streets and to Gateway, where a shuttle offered shelter from the cold to cross the street to the new natural-foods store, where the Toasted Ponies played bluegrass from a toasty spot inside.

One neighbor complained about the music, and drivers hunted for coveted parking spots, but the mood was celebratory as public officials and first-day customers joined Whole Foods team members and property developers in a rush to get inside about 9 a.m.

"It almost reminded me of Black Friday," Watermeier said.

Property Manager Joe Polak of Pioneer Cos., who lives in Buffalo, N.Y., and is no stranger to the cold, acknowledged the public/retail/service mixed-use development is unusual in the real estate world.

"But it's a nice venture," he said. "I hope it leads to more of these projects."

He also offered reassurances that parking will suffice after traffic settles down from the Whole Foods opening. LPS and the developers said months ago they expected traffic and parking congestion when Whole Foods opened, and also expected it to ease.

The site has 467 parking spaces, and depending on the time and day, about 200 are reserved for LPS, 115 for Whole Foods.  After 5 p.m. and on holidays and weekends, it's open, Polak said. By midday Wednesday, he said he had no trouble finding a parking space.

Pioneer Cos. is a sibling to project developer Continuum Partners of Denver, whose CEO, Mark Falcone, also attended the opening.

"This allowed us to create something with more community benefit," he said.

"We worked very collaboratively together on the site layout and then each built our own buildings separately," Falcone said.

Wendy Birdsall, president of the Lincoln Chamber of Commerce, expressed satisfaction with the addition of another natural-foods specialty retailer to Lincoln.

"I don't know that we've ever had as many calls to the chamber as we had to bring Trader Joe's and Whole Foods to Lincoln," she said. "It's nice to add diversity to the marketplace."

She was familiar with Whole Foods from visiting her son in Columbus, Ohio, and said she likes it in particular for produce, meat and pasta.

"I've been waiting for this one to open for a long time," she said.

Pregnant panda! Watch as this giant panda gets an ultrasound

A tour through the new store the week before opening shows what this haven for foodies is doing to make people feel like spending money and time there.

Grocery store at 84th and O gets initial OK

On the day Whole Foods opened its first Lincoln store at 61st and O streets, the Lincoln-Lancaster County Planning Commission approved a plan …

Whole Foods Market at 61st and O streets was one of the major new retailers to open in Lincoln in the second half of 2013.

The parking lot outside Whole Foods Market was full when the store opened at 9 a.m. Wednesday, but spots had freed up within an hour.