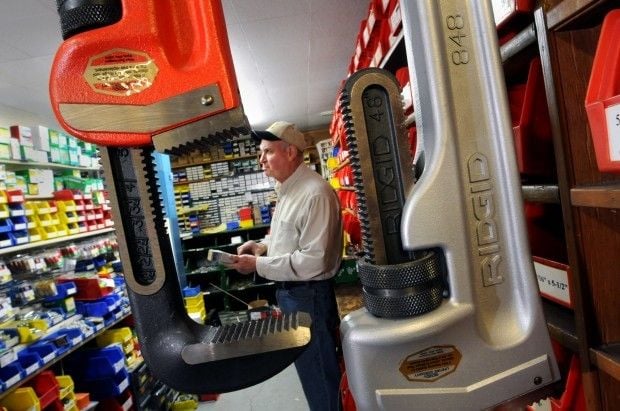 Wrenches large and small can be found throughout the store. Tom Meeske tries to have supplies that customers need on hand so he can complete every order in a timely manner. (ROBERT BECKER / Lincoln Journal Star) 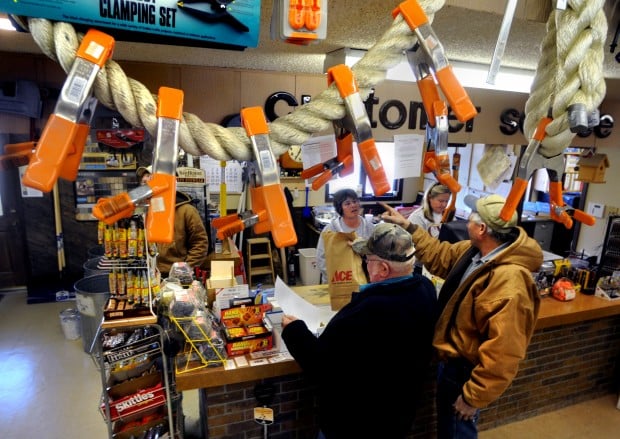 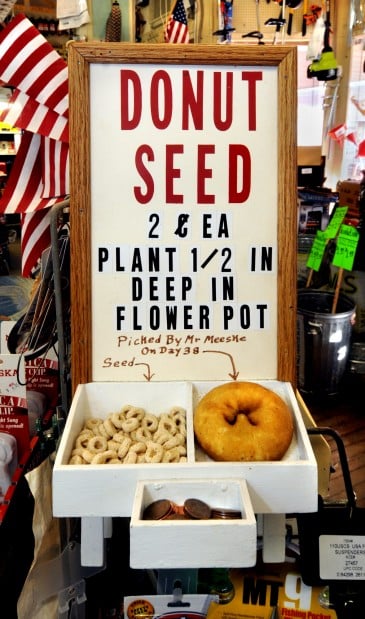 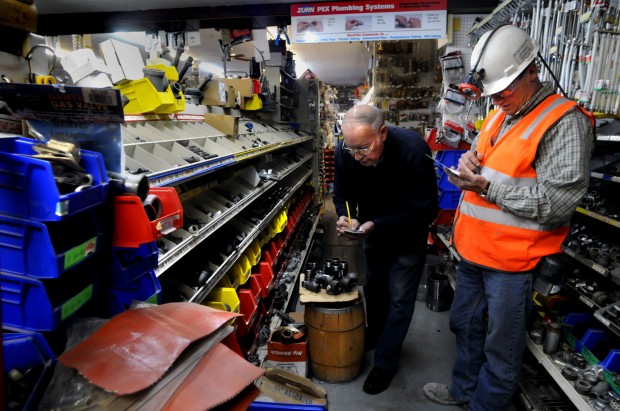 Gayle Meeske makes sure he gets everything on his Martin Marietta Materials customer's list. (ROBERT BECKER / Lincoln Journal Star) 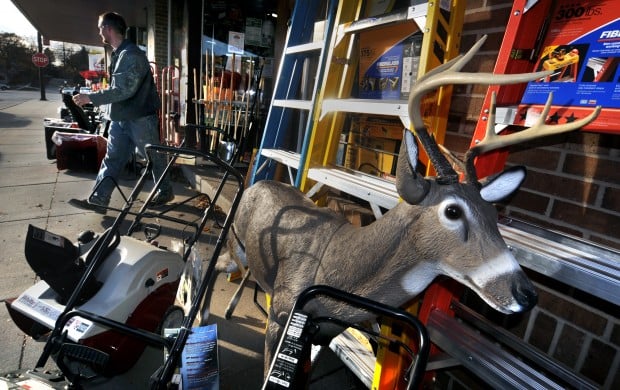 Customers have attributed the saying "if we don't have it, you don't need it" to Meeske Hardware. Outside the store's front entrance you see some items you might need, from ladders and snow blowers to lawn ornaments and shovels. The store mistakenly ordered a plastic deer several years ago and decided to try to sell it on a whim. It quickly sold, and they now sell several each fall. (ROBERT BECKER / Lincoln Journal Star) 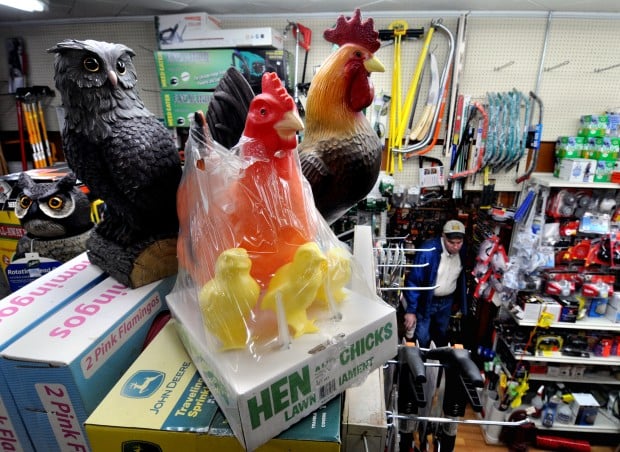 WEEPING WATER -- Ever needed a 5-foot pipe wrench? A log chain? Or a 12-inch bolt an inch-and-a-half in diameter?

They're in stock at Meeske's.

Ever see a cork cutter or Baxter wrench? How about a tomahawk greaser or undertaker's screwdriver?

They're on display at Meeske's.

It all started back in 1939, when Art Meeske moved to Weeping Water. The third of 12 children, he left the family farm in Wisner to open a hardware store.

His children grew up working alongside him in the downtown Weeping Water business. In 1972, sons Gayle and Tom bought the store from their father, and they provide -- as the sign out front says -- everything in hardware.

Most of their customers come from town, the rural areas of Cass County, the mining companies nearby.

"We try to keep something for everybody and change with the customer," Tom said. "As we've grown, we've bought a building next to a building, first to use it as a warehouse, then make it a part of the store. It's not very shoppable, but we've made it work."

They've expanded the main hardware store twice and used a building up the street as a warehouse before using it as a housewares and seasonal merchandise store. That building now also carries toys, sporting goods and clothing.

In addition, they bought Murray Building & Supply in 1999. The lumberyard, 15 miles away, also sells hardware, plumbing and electrical supplies.

Their reputation of inventory and service brings business from unexpected places.

"We have some customers in Denver and Florida who call for a few insecticide products," Gayle said. "They were regular customers when they lived in this area, and they know these bug sprays work."

A contractor drilling in Lincoln who recently broke his 5-foot pipe wrench shopped all over Lincoln and Omaha to get a repair, with no success. Then he called Meeske's.

"The boss's runner said he'd been in the area eight years ago and was impressed with the depth of merchandise when he stopped in back then," Gayle said. "So he called to see if we could help."

Opening earlier than usual the next morning, Meeske's sold the runner a new pipe wrench.

"A repair in Lincoln would have been a special order costing them $375 just for the top jaw," said Gayle Meeske. "We sold them a brand new wrench for $349. This gentleman had just remembered us from stopping in when working in the area eight years prior. I'm so glad he remembered us."

In addition to selling new tools, the Meeskes display old tools customers have given them over the years.

"Each tool has a personality," Gayle said. "They are ornate, so many were handmade for a personalized job. It's fascinating how they were used."

They have a tomahawk greaser, a turn-of-the-century buggy leaf spring lubricating tool.

Their Decatur Coffin Co. undertaker's screwdriver is a ratcheting tool with no gearing to go in reverse. Who needs to open a coffin?

They also have a cork cutter, cork press and cork cutter sharpener. All three came to the store from different sources at different times. In the past, corks were commonly used as stoppers in apothecary jars.

An old tool still in use at the front counter is an Automatic pencil sharpener that's more than 100 years old. Tom Meeske gave it to his brother for Gayle's 70th birthday.

"We have a show-and-tell in our hardware store," said Gayle Meeske. "We're proud of the heritage, the store has been real good to us, the town has been good to us."

Customers will say the Meeskes have been good to the community. Since 1939, they've supplied everything in hardware, and more.

Reach Robert Becker at 473-2630 or rbecker@journalstar.com.

The South Beltway has been discussed since the '60s. Now the $352 million project is less than two years from carrying cars and trucks.

One dead in SUV-dump truck crash in northeast Lincoln

Police do not suspect drugs or alcohol played a role, though they're still investigating the collision on Cornhusker Highway.

The man began making sexual comments that made the woman uncomfortable, so she started recording the encounter. Using the recorded audio and a description provided by the victim, LPD officers found the suspect.

Police responded to the 2200 block of North Cotner Boulevard at about 3:30 a.m. on a report of a fight in the parking lot, according to LPD Capt. Max Hubka. A witness at the scene said there were about 30 to 40 people involved.

While courses have not been finalized, some offerings will include classes in digital design, sports and event marketing, video production, web design, programming and entrepreneurship.

In court records, Lincoln police say they found the suspect having intercourse with a 15-year-old girl in a car parked at an school. Police seized his cellphone, and investigators said in an affidavit they found nine videos of child pornography.

The stranger also hit the employee in the head with a chair, causing an injury that required staples, Officer Luke Bonkiewicz said.

A total of 31 people applied to be Lincoln's newest police chief, a group the city has narrowed to eight finalists. Their names won't be made public until that list is narrowed to three or four.

97 years after his mother's birth, son says her world 'seemed more like fiction than fact'

Burt Smith sat down and wrote his list and he and his brother composed a life story in chapters. Birth. Pre-Teen Years. Marriage and War Years. The Farmer’s Wife. Move to Town. Retirement Years.

Wrenches large and small can be found throughout the store. Tom Meeske tries to have supplies that customers need on hand so he can complete every order in a timely manner. (ROBERT BECKER / Lincoln Journal Star)

Gayle Meeske makes sure he gets everything on his Martin Marietta Materials customer's list. (ROBERT BECKER / Lincoln Journal Star)

Customers have attributed the saying "if we don't have it, you don't need it" to Meeske Hardware. Outside the store's front entrance you see some items you might need, from ladders and snow blowers to lawn ornaments and shovels. The store mistakenly ordered a plastic deer several years ago and decided to try to sell it on a whim. It quickly sold, and they now sell several each fall. (ROBERT BECKER / Lincoln Journal Star)

As Tom Meeske heads to the side office, he is surrounded by items from floor to ceiling. (ROBERT BECKER / Lincoln Journal Star)
© Copyright 2021 The Lincoln Journal Star, 926 P Street Lincoln, NE | Terms of Use | Privacy Policy
Powered by BLOX Content Management System from TownNews.com.
You don't have any notifications.