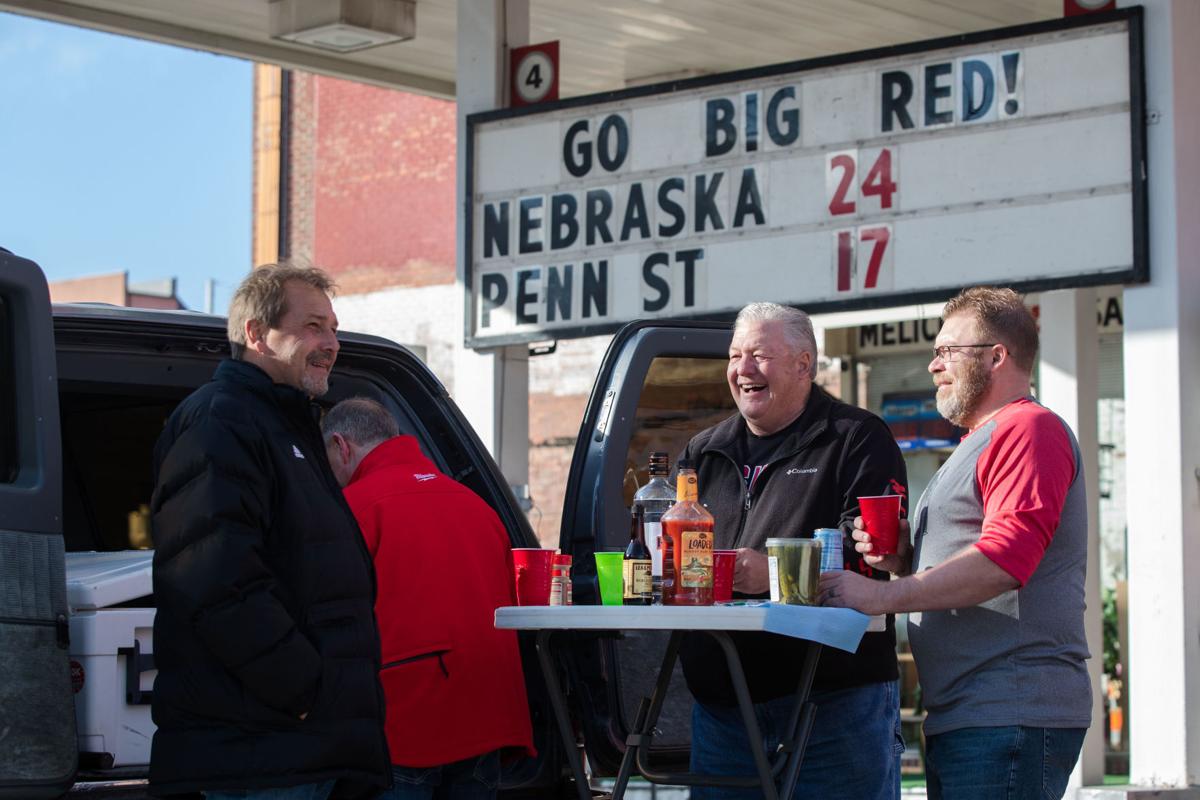 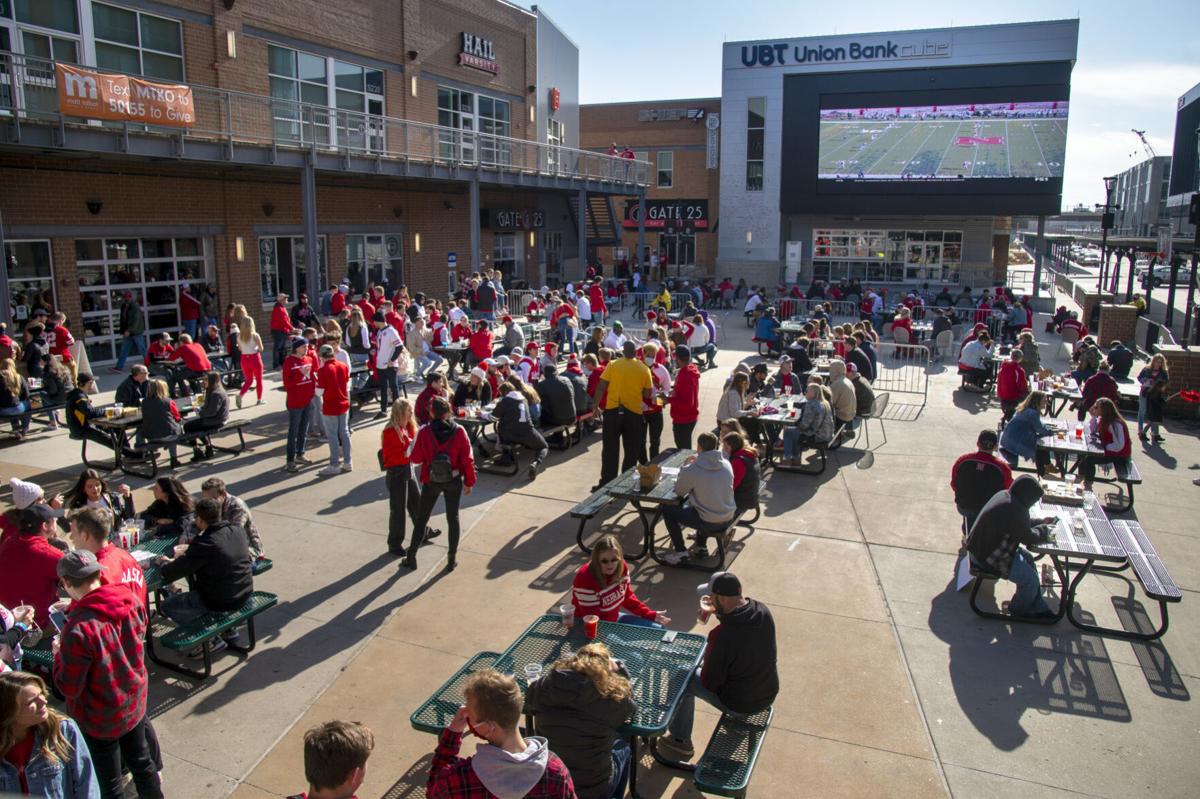 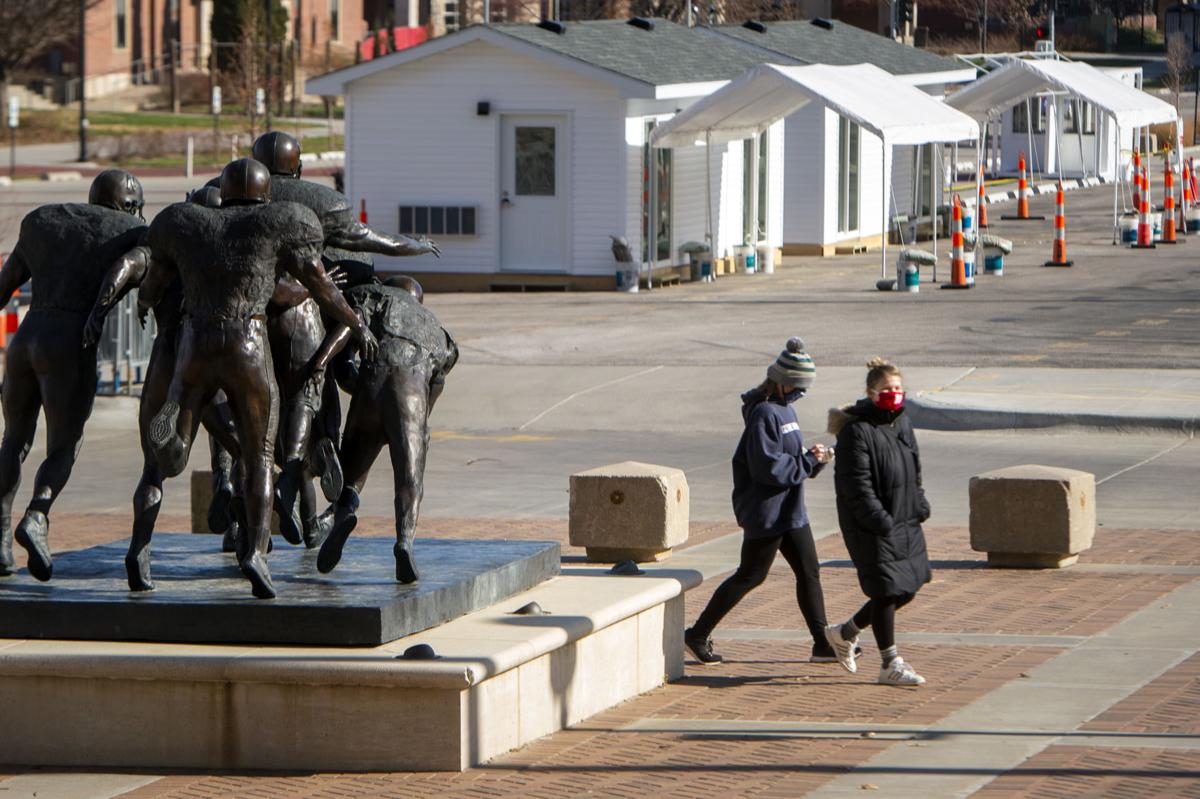 Kim Ehlers (left) of Norfolk and her daughter Elise Ehlers, a senior at the University of Nebraska-Lincoln, walk past the parking lot on the east side of Memorial Stadium on Saturday. The parking lot would normally be full of fans tailgating before a Nebraska game, but it is now home to a COVID-19 testing site.

The motorcade — three Lincoln police cruisers and a trio of team buses — idled quietly outside the Cornhusker Marriott on a gameday Saturday morning that was anything but typical.

Ordinarily, there would be dozens of red-clad faithful outside the hotel, greeting the Huskers as they boarded the buses for the 5-minute journey to Memorial Stadium.

On Saturday, there was no sendoff. The players and coaches walked out of the hotel without distraction. No one — not a single fan — showed up.

Meanwhile, the LPD escort was nothing more than ceremonial. The cruisers lit up their lights and blared their sirens, but there was no need for traffic control. The downtown traffic was light — more like an early Sunday morning than those days that have come to epitomize Lincoln and its fervor for the Nebraska football team.

"What does Nebraska have to offer but football?" asked Jordan Ramsey, who sat in the Railyard and watched the Huskers jump to a quick lead against Penn State in a game he would have rather been viewing in person less than a mile to the northeast.

But at least there's still football, he said.

It's different. Much different. The coronavirus caused a delay in the start of the football season and then precluded fans from going to the games and pushed the first gameday Saturday of 2020 into November.

A recent spike of COVID-19 cases in Nebraska — and Lincoln — has caused tightened statewide directed health measures, put in place by Gov. Pete Ricketts this week.

The Railyard limited its capacity to 300 people Saturday — a number it approached as kickoff neared.

Gate 25, also operating at reduced capacity, was turning away fans by the middle of the first quarter, and other restaurants, such as Lazlo's and Rodizio Grill, also had a steady flow of customers.

Where the ban on fans was most noticeable was on the streets. Missing was the steady stream of automobiles coming down I-180 into Lincoln and the heavy foot traffic that transforms the 2 square miles of downtown Lincoln into a festival each gameday.

The scene outside: A few bystanders outside the stadium, but little sign of a Big Ten clash going on

"This is sad — really sad," said Bruce Melichar, owner of Melichar 66 Sales and Service, a family-owned gas station on Ninth and P streets for 50 years. "It's hard to believe this is a gameday. On a normal Saturday, I'd have 40 cars on this lot."

Melichar might have had the only active tailgate party going in downtown Lincoln. As vehicles trickled past a couple of hours before kickoff, a card table was set up behind an SUV with all the fixings — including Worcestershire sauce and pickles — to make the perfect bloody mary.

When the game began, those at the station cozied up to one of the televisions situated near the gas pumps. They could have watched from the comfort of their own homes, but what fun would that have been?

"I just wanted to tailgate one time this year. I wasn't going to miss this today," said Loran Tejral, an auto parts dealer in Grand Island who has been tailgating outside Melichar's — a place well known for its billboard, which predicts the weekly score (always a Nebraska win, because "I like my windows," Melichar says.) — since 2006.

But while there was excitement that accompanies any gameday, the mood was also melancholy as Tejral, Melichar and Ed Sabata sipped their drinks.

They told stories of tailgates past: The drunken debauchery, the memorable games and the folks who come from all over — strangers who suddenly become lifelong friends — for a few hours about seven times a year.

The scene inside: 'Taking in the weirdness' as cardboard cutouts and a few family members watch NU's home opener

"This is my tailgate family and I miss them," Sabata said.

Maybe this is the reality of 2020. While football has trudged forward, the buildup to kickoff is not a necessity this year.

There is no pregame. No pregame traffic to wade through. No pregame mixers with friends. No pregame meal to eat — did anyone else miss the tantalizing smells of searing meat wafting through downtown Saturday? — before making your way inside the stadium.

"We're making the best of it," said Hannah Theodosopoulos, who also watched from the Railyard.

But the hope is that 2021 brings with it newfound optimism in both the Huskers and an end to a pandemic that has ravaged the world.

"Not having people here turns Lincoln into an average town on gamedays," he said.

Reporter Sadiyah Ali contributed to the reporting of this story.

Although the setting was different from previous homecoming ceremonies due to coronavirus restrictions, that didn't stop Cooper Grabenstein and Lauren Kubat from being crowned royalty Saturday.

Local health officials may impose further health restrictions, including a shutdown of bars and limit wedding receptions to 10 people, next week as they hone in on gatherings and try to prevent COVID-19 cases from overwhelming Lincoln hospitals.

‘Something new every day’: Lincoln restaurants prepare for Thanksgiving during COVID

With Thanksgiving in mind and the possibility of quite a few people cautiously opting out of gathering with family, some restaurateurs spent days whipping up Turkey Day meals for pickup.

Kim Ehlers (left) of Norfolk and her daughter Elise Ehlers, a senior at the University of Nebraska-Lincoln, walk past the parking lot on the east side of Memorial Stadium on Saturday. The parking lot would normally be full of fans tailgating before a Nebraska game, but it is now home to a COVID-19 testing site.