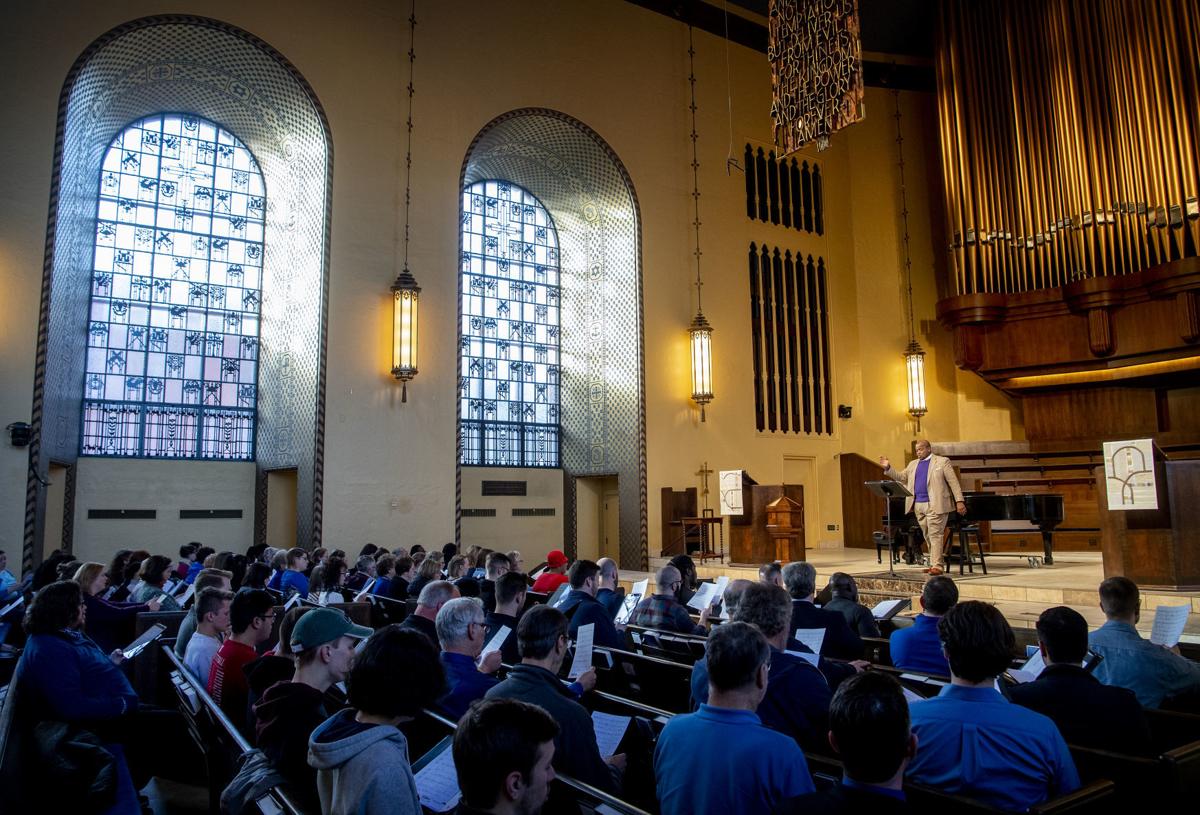 Dr. Everett McCorvey (right), the founder and music director of the American Spiritual Ensemble, leads members of the group and local church members in a rehearsal of "We Shall Overcome" on Jan. 18 in the sanctuary of First-Plymouth Church. 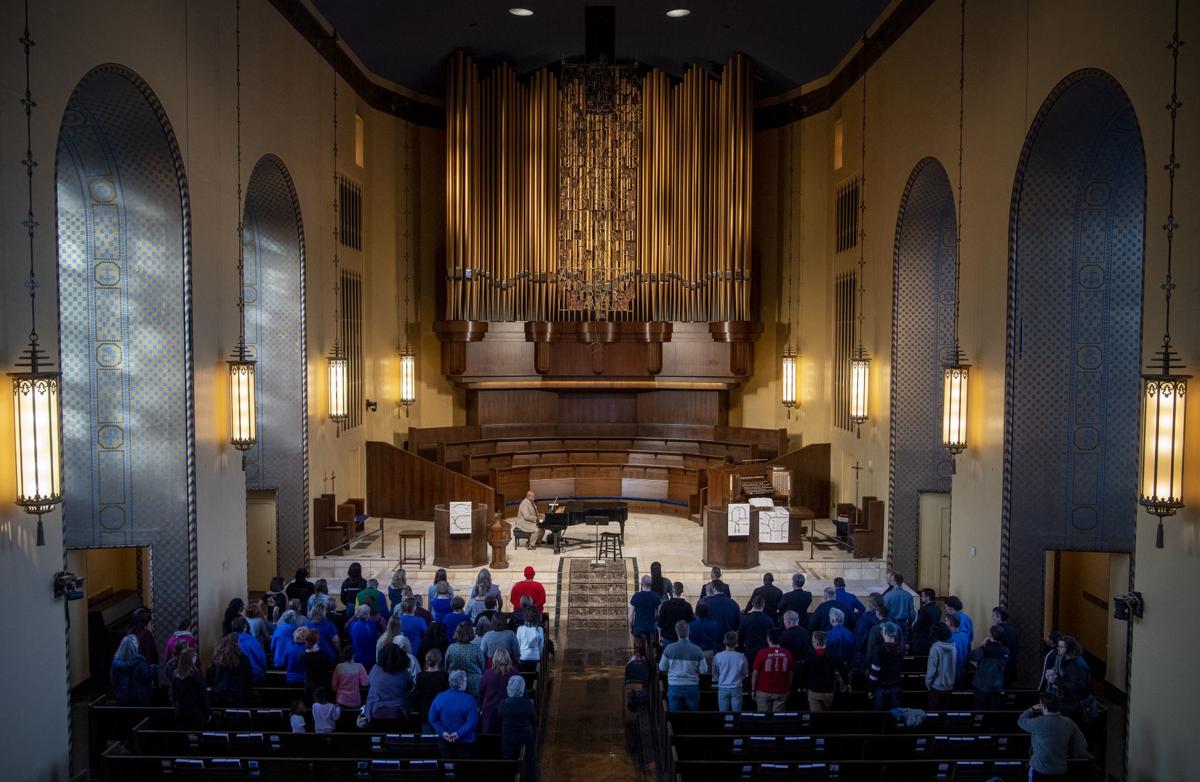 Dr. Everett McCorvey (at piano), the founder and music director of the American Spiritual Ensemble, leads members of the group and local church members in a vocal warm up Jan. 18 in the sanctuary of First-Plymouth Church.

When the concert appears online Sunday afternoon, viewers can watch at their leisure and opt to make a donation, too.

But the money won’t go to Abendmusik at First-Plymouth Church -- the longtime Lincoln nonprofit that hosted the American Spiritual Ensemble in January and is now offering a video version to the public.

Like every other organization that thrived on people coming together, they’d wrestled with how to proceed after COVID-19 hit.

And then artistic director Tom Trenney came up with an idea.

Cancel all in-person events for the rest of the year.

Forgo all income from ticket sales and ad revenue.

And give the online audience the option of contributing to a chosen nonprofit.

“This is a brave new world of artistic design for arts organizations,” Coley said. “It was like a light bulb turned on for us.”

The concert released Sunday at 4 p.m. will benefit the Malone Center. Viewers will hear the concert that coincided with Martin Luther King Jr. Day, featuring the renowned African-American ensemble in its first visit to Nebraska, the premiere of “Rise Shine!” by University of Nebraska-Lincoln music professor Marques Garrett and music performed by Malone Center youth.

The concert is also an education in the American Negro spiritual tradition which gave birth to jazz, blues, gospel and pop.

“There’s so much we can learn about how those songs came to be and the people who sang them,” Trenney told the Journal Star in January. “The music is going to lift up some of that message of light.”

The concert will include a short video highlighting the Malone Community Center and its mission and a link for donations.

“We wanted to highlight the incredible work of the Malone Center at this time of great social questioning and looking at injustices,” Coley said.

The pandemic-inspired revamped season is an extension of the trajectory the organization had already started, said James Keim, board president.

As part of its fall series, Abendmusik has offered a ticketless concert with donations benefiting a nonprofit. Proceeds from last year’s Messiah Sing went to Matt Talbot Kitchen.

The loss of community concerts has been disheartening, but they are looking at the online forum as a way to engage a wider audience, Keim said.

“An opportunity to create community and create hope,” he said. “That’s what I love about the arts.”

Abendmusik is fortunate to have a 50-year history, an endowment and strong support from the community, Coley said.

The entire season has yet to be set, he said, but July will feature Hymnfest and this fall, a silent film festival with piano and organ music befitting the genre, played by Trenney.

The board and staff are still finalizing a list of nonprofits to match with each concert, and the organization will continue to feature its regular advertisers at no cost to them.

“The local economy has taken a hit, so it seemed completely unfair to ask our current advertisers for more,” Coley said.

And they will forge ahead with an eye on spring and gathering together at First-Plymouth for music.

“We’re really pleased with what we’ve come up with,” Keim said. “But we’re really looking forward to being in the same space.”

Each month, Abendmusik at First-Plymouth will offer a concert on its website. The first concert will become available at 4 p.m. Sunday at abendmusik.org.

A Nebraska woman claims a county official from Kansas and his wife may have exposed her to COVID-19 at a hotel pool in Valentine.

“Resilient,” by Aileen Wiles, is in my view the piece that best captures the intent of the Lincoln Billboard Art Project, which last month placed artist-created billboards around the city.

Lancaster County had its 12th coronavirus-related death on Thursday.

These Fourth of July songs don't necessarily salute “baseball, hot dogs, apple pie and Chevrolet," but they're worth a listen anyway.

Holdrege mom just makes it to daughter's wedding: 'I'm sorry I'm late. I had to save a life.'

Walking her daughter down the aisle was the daunting part of the day for Jodi Damrow. Saving a life on the way to the wedding was no big deal.

A Lincoln High student wanted to do something positive and empowering for young black women like herself. And with the help of a generous photographer, she did just that.

Cindy Lange-Kubick: Mary Costello — 'I think she wrote a gratitude list every day'

Mary Costello, the 79-year-old co-founder of Matt Talbot Kitchen, died Sunday, leaving behind a large family and scores of others touched by her words and deeds.

Dr. Everett McCorvey (right), the founder and music director of the American Spiritual Ensemble, leads members of the group and local church members in a rehearsal of "We Shall Overcome" on Jan. 18 in the sanctuary of First-Plymouth Church.

Dr. Everett McCorvey (at piano), the founder and music director of the American Spiritual Ensemble, leads members of the group and local church members in a vocal warm up Jan. 18 in the sanctuary of First-Plymouth Church.