Monday Night Football: Scores and updates from Rams vs. 49ers

The 130-foot-by-130-foot floating playground at Louisville State Recreation Area was damaged by vandals Aug. 11, and will remain closed for the season. 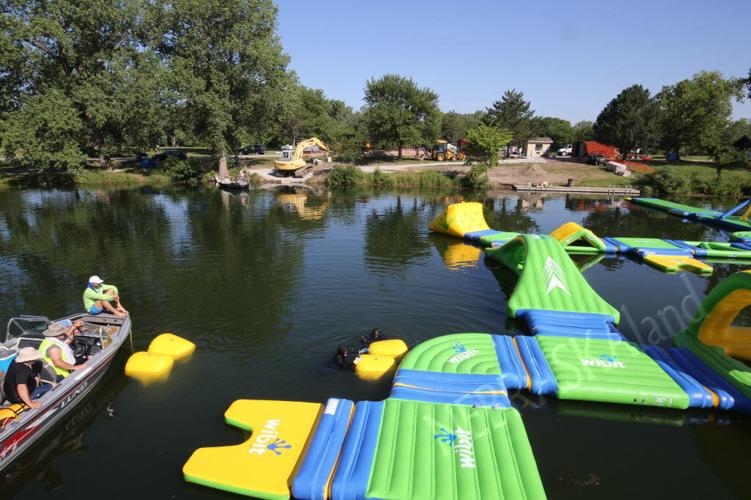 The floating playground at Louisville State Recreation Area has blown up since it opened four years ago.

The park offers three afternoon sessions — with 100 people maximum — on the platform of 70 inflatables.

“And I would say that 85% to 90% of the time, we have completely booked every session,” said Sherri Gross, who works at the park, about 40 miles northeast of Lincoln.

But the playground is closed for at least a week — maybe longer — after vandals punctured eight of the pieces Thursday night.

The park needs to find divers to unhook the damaged pieces from their anchors, 20 to 25 feet deep in Lake No. 2. Then the pieces need to be taken to the shop, dried, patched, inflated and reinstalled, Gross said.

Park officials hope to have the playground open again by next weekend, but that’s not a guarantee because of a short staffing issue, she said — some of the park’s temporary employees are returning to school.

The floating playground opened in 2018 as part of the Nebraska Game and Parks Commission’s $35 million Venture Parks initiative, designed to draw new visitors to state parks and recreation areas.

Monarch Blitz is asking for help to determine trends to save the iconic butterfly.

Cozy camping: Nine Nebraska state parks where you can find some peace and quiet

Many state parks are busy, with lots to see and do. But there are plenty of quieter ones, too, that typically aren't as packed with visitors.

Before it was vandalized, the floating playground was drawing up to 300 people a day.

This newly developed mosquito repellent might have you ditching the DEET

This newly developed mosquito repellent might have you ditching the DEET

The 130-foot-by-130-foot floating playground at Louisville State Recreation Area was damaged by vandals Aug. 11, and will remain closed for the season.