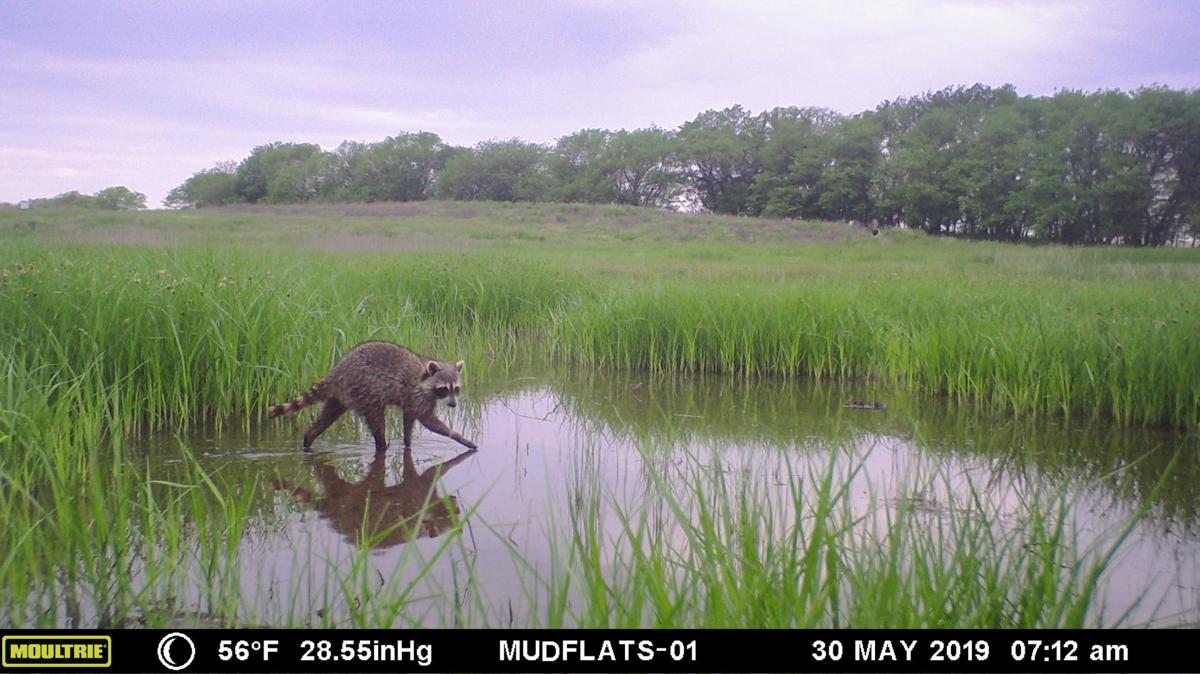 A trail cam caught a raccoon on the move at Marsh Wren Community Wetland. 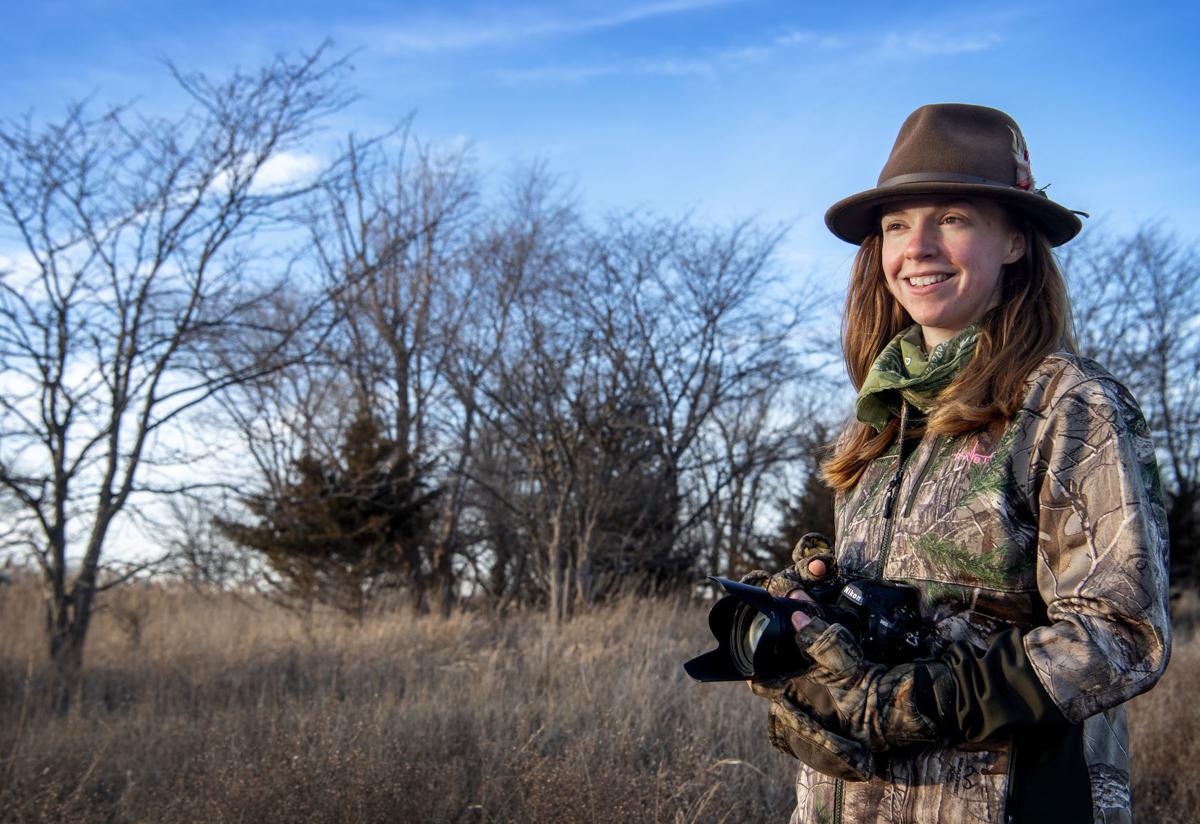 University of Nebraska-Lincoln grad student Brooke Talbott has been documenting the Marsh Wren wetland near Lincoln for the past three years. It’s undergoing restoration by the NRD, but it’s also under pressure from nearby residential development. Talbott uses blinds and trail cameras to document the wildlife. 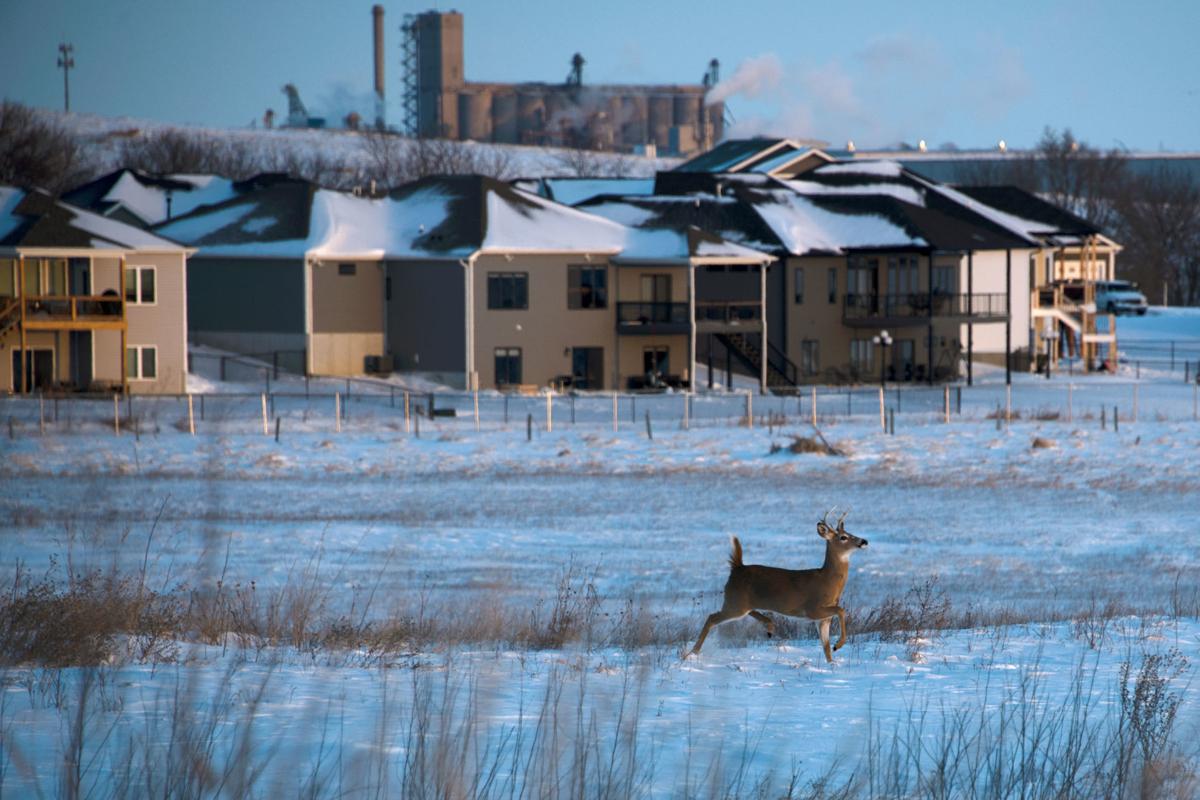 The city and country come together at Marsh Wren Community Wetland. 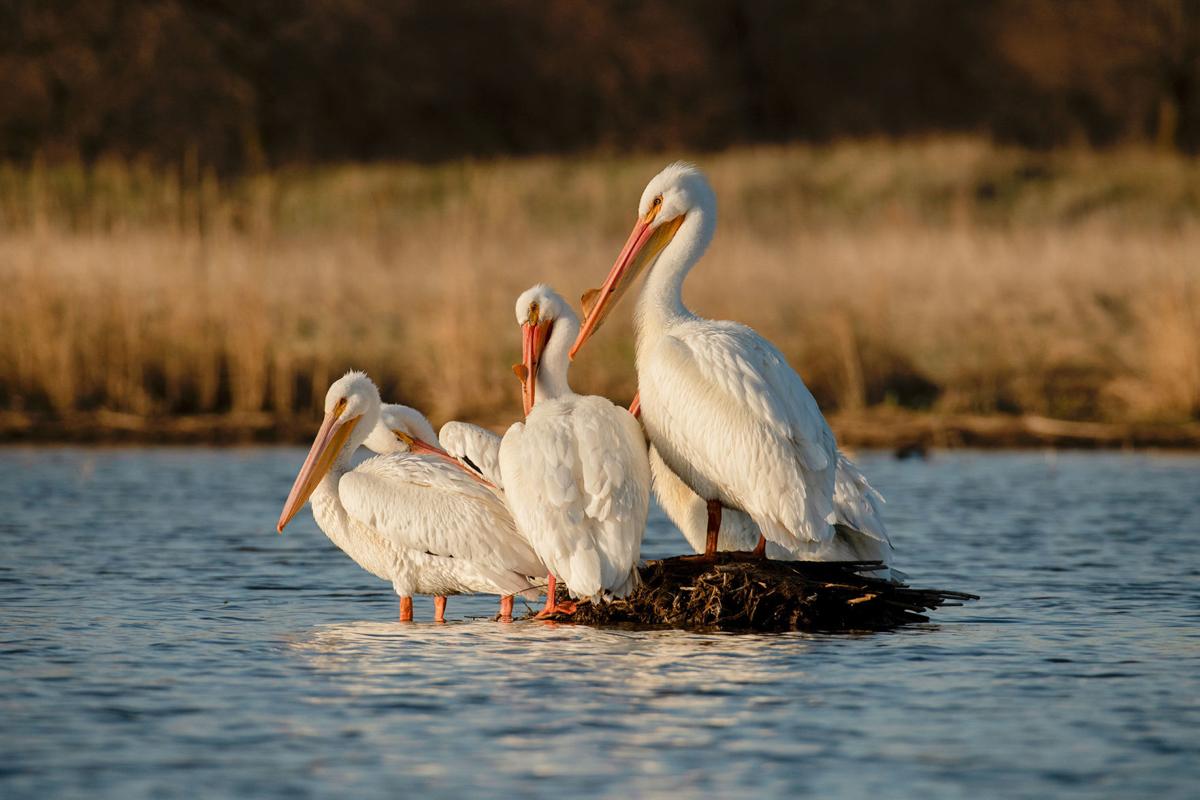 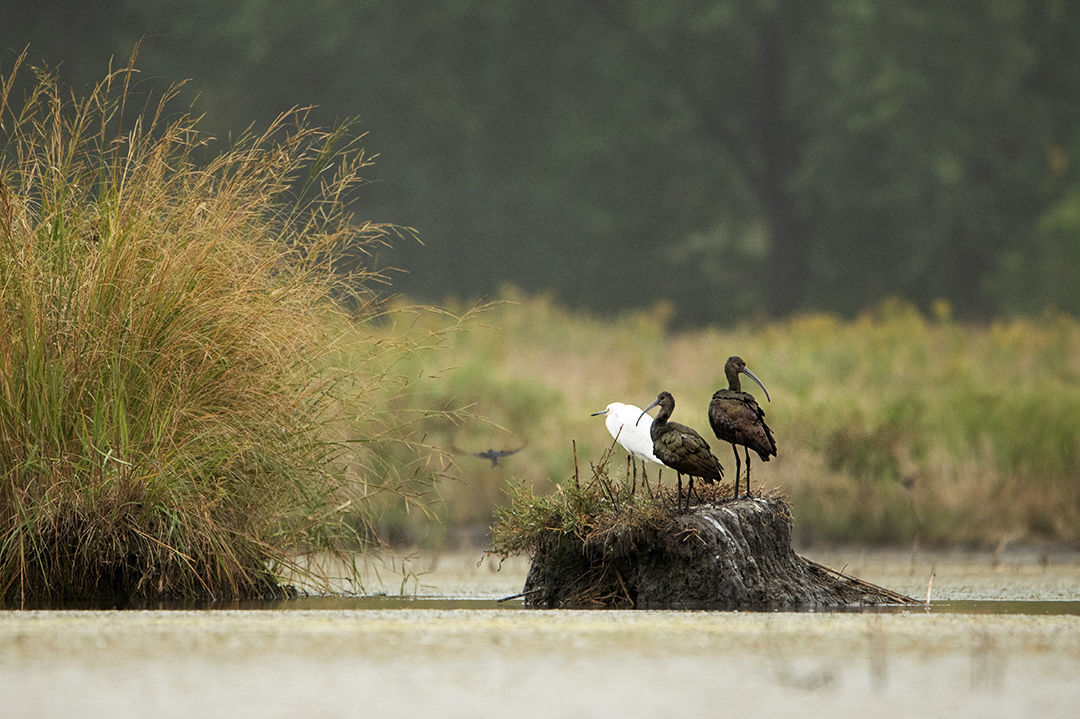 A snowy egret (white) and a pair of ibis share a piece of dry land at Marsh Wren Community Wetland. 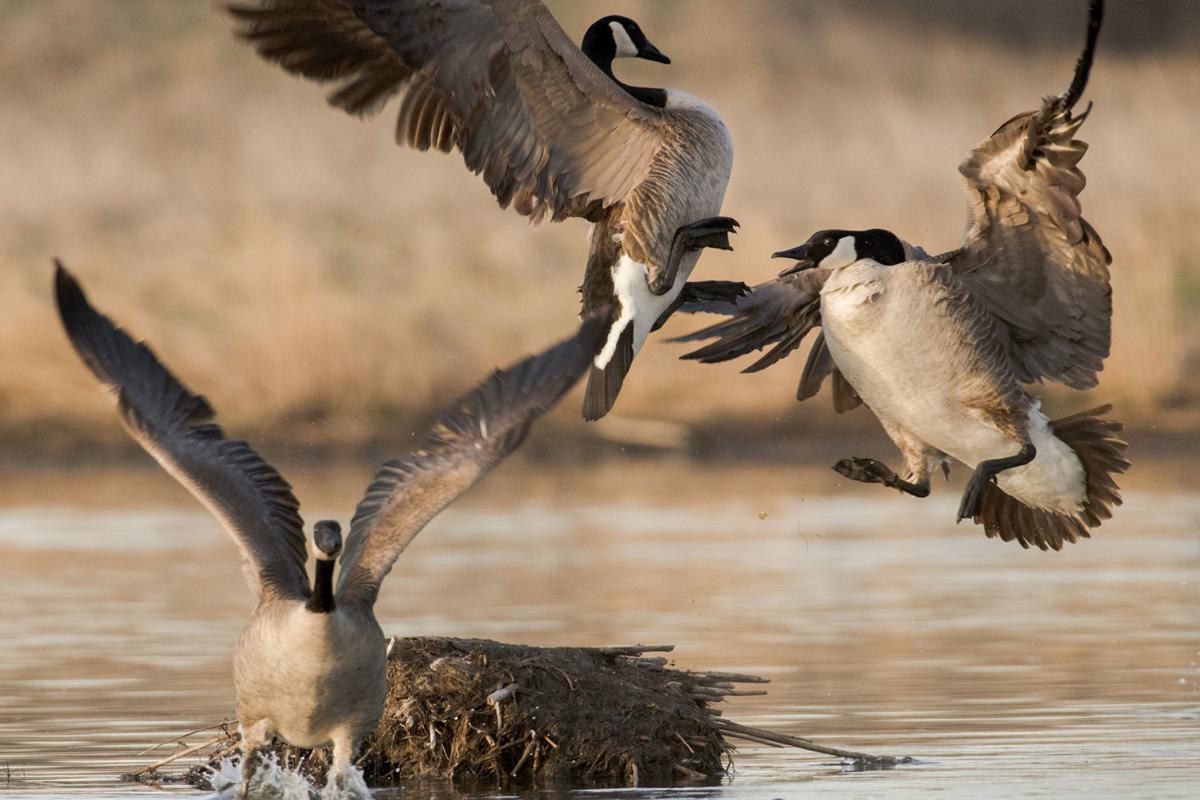 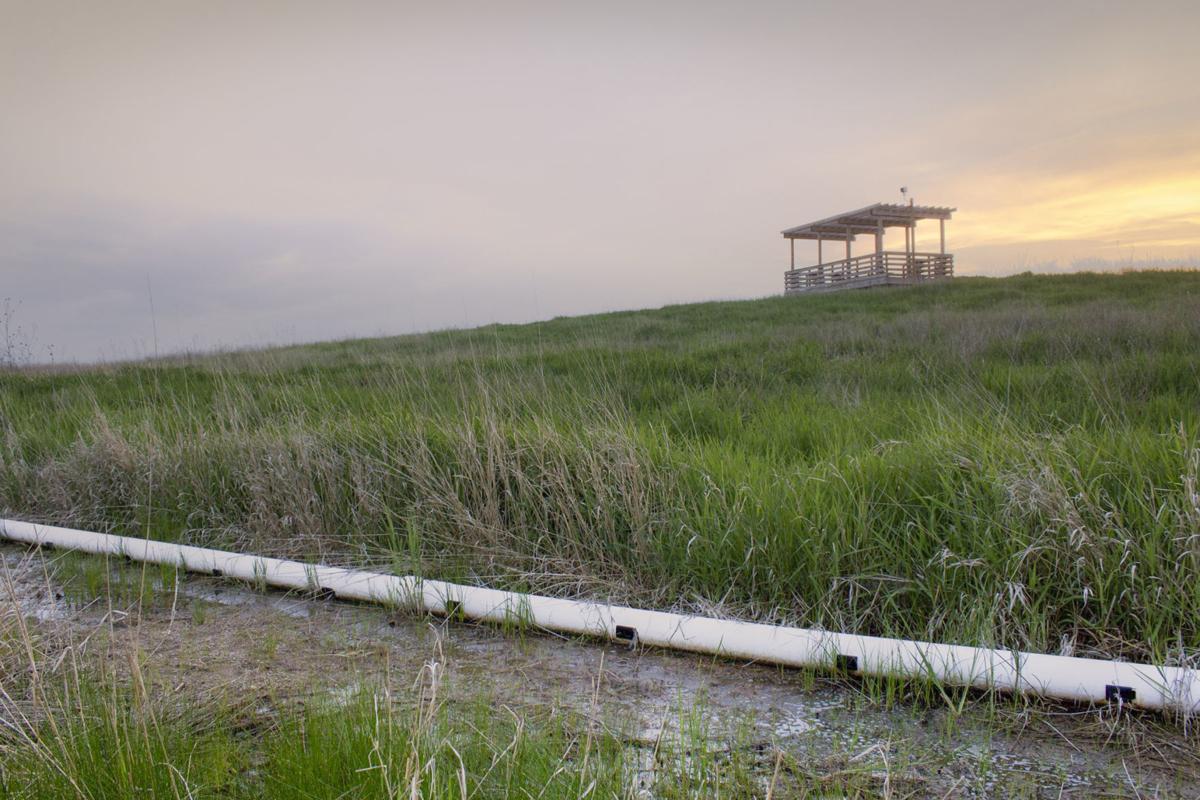 Saltwater irrigation is restoring the saline wetlands at Marsh Wren, on the north edge of Lincoln. 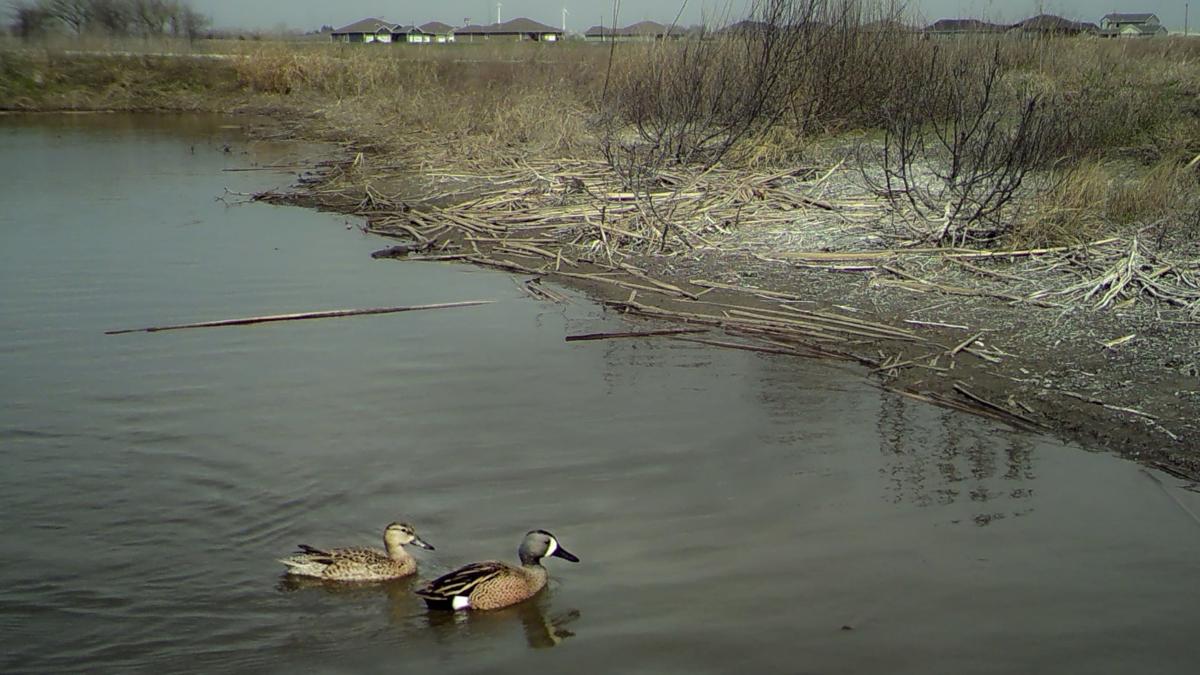 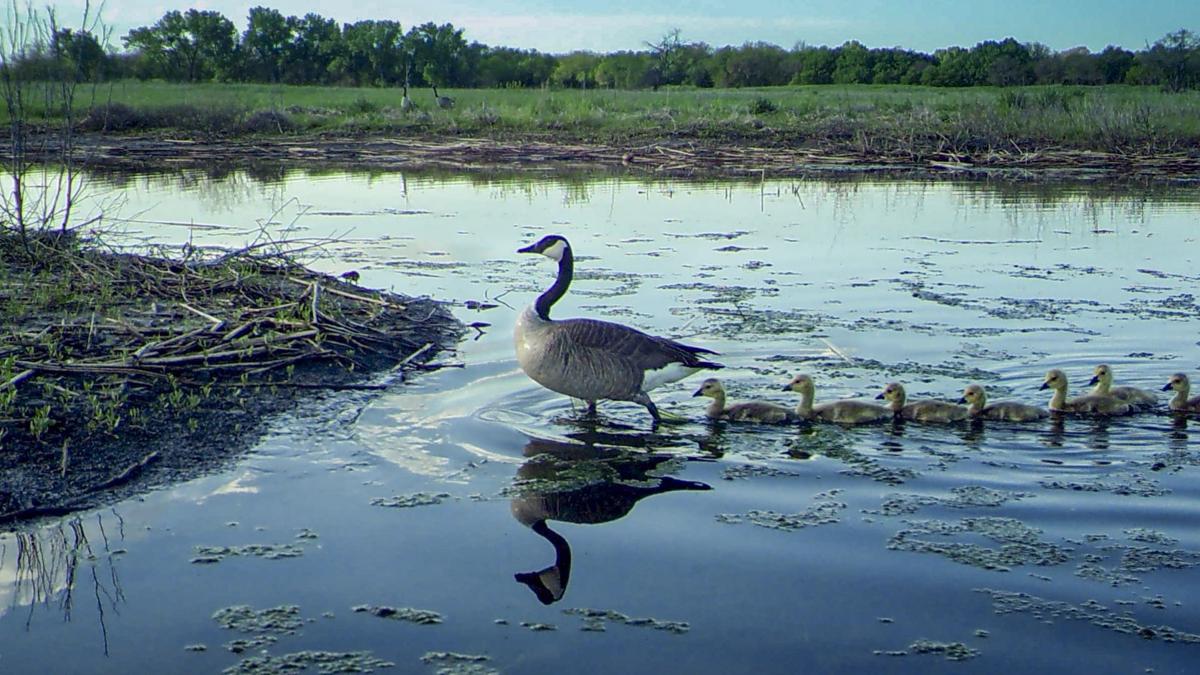 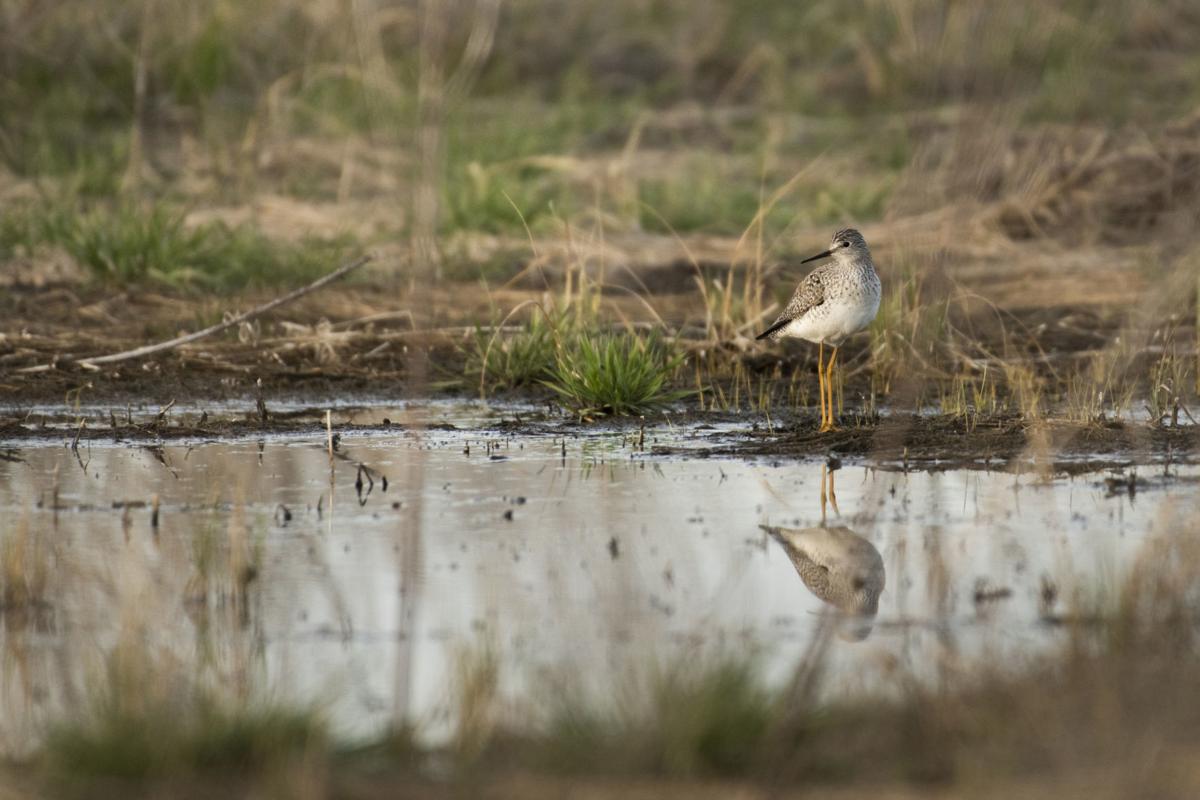 A lesser yellowlegs hangs out at Marsh Wren. 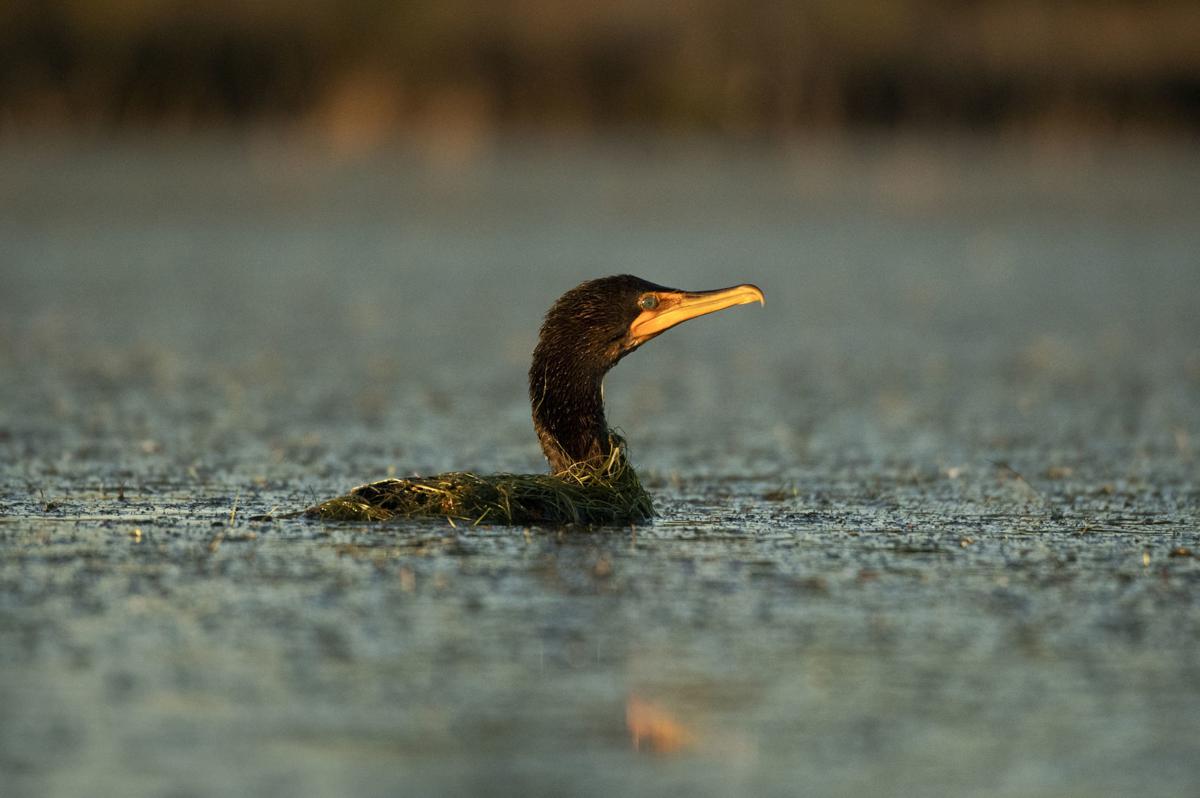 A double-crested cormorant swims in the pond at Marsh Wren Community Wetland.

She likes to get set up long before first light, while most of the nearby city is still sleeping.

Brooke Talbott unpacks her camera and climbs into her blind to wait — for two hours, three hours, sometimes four — and to watch, for something to stir at Marsh Wren, a 150-acre saline wetland along Salt Creek.

“I go out there and freeze my toes off,” she said. “But I come back with some really cool experiences.”

In three years, her cameras have captured coyotes and cormorants, mink and blue herons, opossums and pelicans. Skunks, snow geese, deer, ducks and an army of raccoons.

Bobcats are close, too. She’s found their scat and their tracks. “It’s the one I’ve been chasing. That’s the unicorn I want to see.”

Talbott returns to Marsh Wren week after week — her personal camera supported by 10 trail and time-lapse cameras — but it’s a short trip.

The graduate student barely has to leave the city limits.

Talbott’s time at Marsh Wren should give her a master’s degree at the end of next summer.

And it should give everyone else an invitation to a close-to-home oasis: She plans to turn all of her documentation of the wetland into a web-based interactive and educational map, designed to teach people about the area and inspire them to get out.

They won’t have to go far. Marsh Wren is near North 40th Street and Arbor Road, south of the interstate and in the shadow of a housing development.

“It’s very accessible,” she said. “It will be a really good place for people to get outside and learn.”

During her senior year at UNL, Talbott took a class offered by the organizers of the Platte Basin Timelapse project, which planted 60 cameras between the Platte River’s origins at the Continental Divide and its ending at the Missouri River, a 90,000-square-mile basin.

Talbott spent the semester focused on the Frank Shoemaker Marsh near 27th Street and Arbor Road, documenting the wetlands and its animals.

“I watched how that little place changed over time. I liked it so much I wanted to come back and make a degree out of it.”

She chose Marsh Wren for her graduate work, and her timing was good.

Lincoln owes its existence to the rare saline wetlands that used to pepper parts of what became Lancaster and Saunders counties.

“Saline wetlands are very unique,” said Dan Schulz of the Lower Platte South Natural Resources District. “Historically, Lincoln is where it’s at now because they were prospecting and mining these salt flats.”

Then, 20 years ago, the federal government declared the Salt Creek tiger beetle an endangered species, and public land managers started thinking even harder about the importance of the shrinking habitat.

That launched protection and preservation efforts by the Saline Wetlands Conservation Partnership, a partnership of the state Game and Parks Commission, the city of Lincoln, the natural resources district and nonprofits.

Among its projects? The recent restoration at Marsh Wren, a struggling saline wetland near the confluence of the Little Salt and Salt creeks.

The 150 acres were a mixture of school lands, a purchase of private property and a gift. Work started in 2016, and included a pair of wells to draw salty groundwater and irrigation pipe to soak the surface, and a broad habitat bench carved into the creek bank.

“We decided to do this in a big way, bigger than we’ve ever done before,” Schulz said.

The irrigated saltwater is slowly changing the landscape, returning it to what it used to be, killing invasive vegetation and attracting the plants it historically hosted.

Last summer, managers were thrilled to discover saltwort — a state endangered plant — growing near the water-distribution system. A sign they were doing something right.

“That was very exciting,” Schulz said.

And Talbott and her cameras have documented it all. “I’ve been involved since the beginning,” she said. “Before they started moving dirt around.”

It’s a photogenic place, the wetlands and pond providing a pit stop for migratory birds, the creeks serving as natural corridors for four-legged wildlife.

It could also be the most documented patch of land in the county. The Platte Timelapse Project’s five cameras have been snapping hourly photos for years, before the heavy equipment restructured the creek bank, before homes appeared on the horizon.

And even when Talbott isn’t crawling around with her camera, her five trail cams are capturing the action. One of them caught dozens of deer splashing across the creek. Another filmed a curious coyote coming nearly face-to-face with the lens.

She’s shot double-crested cormorants making their twice-annual visit, fishing in the pond and then drip-drying their wings on shore.

“It’s only 150 acres, but there’s still so many animals coming through there and depending on it,” she said.

And when the breeze hits the salt flats just right, she can imagine she’s standing near the ocean.

But her fieldwork is wrapping up. She’s analyzing and editing three years of documentation, getting ready to produce her interactive map called Wild Edges.

She wants to be a conservation storyteller, so she’s starting by telling Marsh Wren’s.

“The story I want to tell is that there’s really interesting and unique spaces that are really close to home. You don’t have to go five or six or eight or 20 hours out of your way to see something remarkable.”

While much of Nebraska was still fighting floodwaters and tallying tragedy, this soon-to-be-viral story was a refreshing surprise – sort of like a cold beer at the end of long, hard day.

Peter Salter's most memorable: Numb to it

Drew Wolfe would talk about his family’s flood-scarred farm, but only if we visited in person. I’m glad we did, because there was no way to appreciate the scale of the damage without seeing it. Even then, we needed a math professor to help calculate the volume of Platte River sand that had swallowed Wolfe’s 200-acre cornfield: 800,000 cubic yards, or enough to fill 67,000 dump trucks.

Most of Lincoln had likely never heard of the Goodyear Fitness Center, but the former elementary school served Havelock for decades, a meeting place where strangers became friends, a gym where retirees could take care of themselves and each other, and as a remnant of the factory that helped build the neighborhood.

This story spanned a century and much of the globe, from Germans from Russia meeting and marrying in Lincoln’s South Bottoms, to the attack on Pearl Harbor, to a team of scientists at Offutt Air Base trying to identify the mixed-up remains of 400 sailors and soldiers. But it’s also a story about pain and patience, and a Lincoln family that waited 67 years to be able to say goodbye.

This story hit close. I’ve had three recent heart procedures at the same hospital. The days before were already anxious and frightening, and I had nothing but the compassion of my co-workers. I couldn’t imagine the stress that would come with taunting, teasing and a toe tag.

Jim Walz took this video Wednesday evening on the west side of Holmes Lake Dam. A coyote was getting close to bikers several times.

The Sod House Museum, a longtime fixture along Interstate 80 at Gothenburg, went up for sale last year.

Signs of animal life are all around us, but they become more visible in winter, when a fresh snowfall can reveal the tracks of animals and bir…

Lincoln craft-makers pitch in to help Australia after wildfires

In response to recent devastating wildfires in Australia, several Lincolnites are doing their best to make a difference from halfway around th…

If you encounter a coyote, Animal Control says to look directly at the animal, raise your arms and shout or blow a whistle until it leaves.

A trail cam caught a raccoon on the move at Marsh Wren Community Wetland.

University of Nebraska-Lincoln grad student Brooke Talbott has been documenting the Marsh Wren wetland near Lincoln for the past three years. It’s undergoing restoration by the NRD, but it’s also under pressure from nearby residential development. Talbott uses blinds and trail cameras to document the wildlife.

The city and country come together at Marsh Wren Community Wetland. 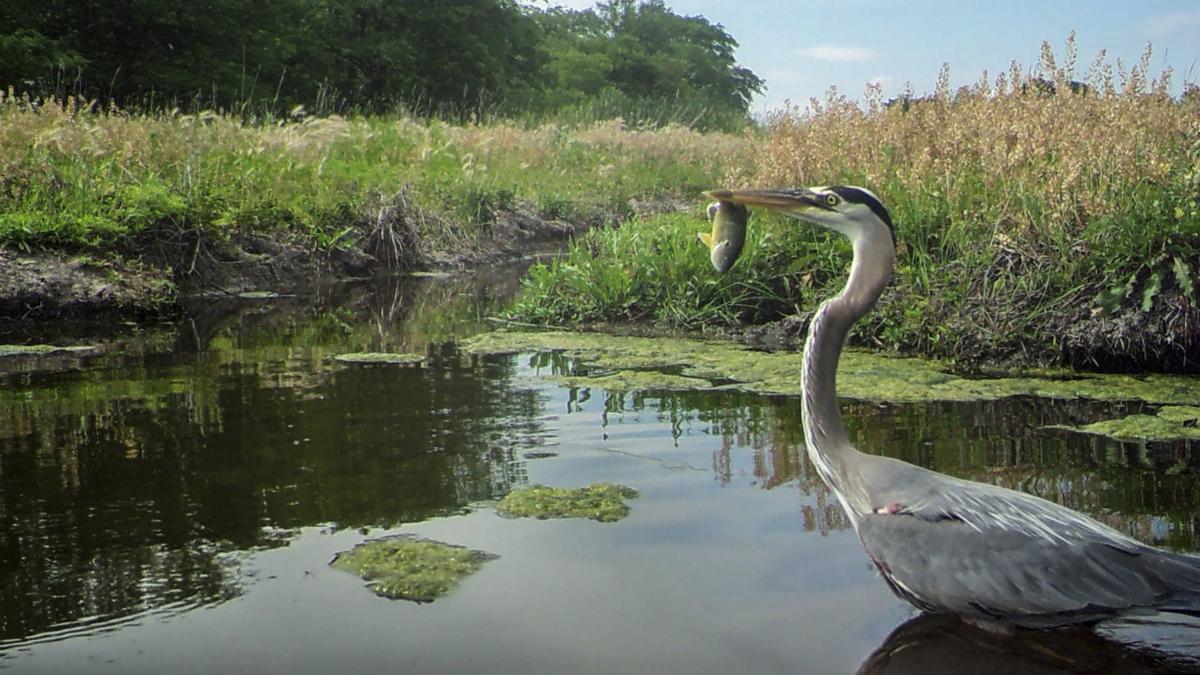 One of Brooke Talbott's trail cams caught a great blue heron getting ready for dinner. 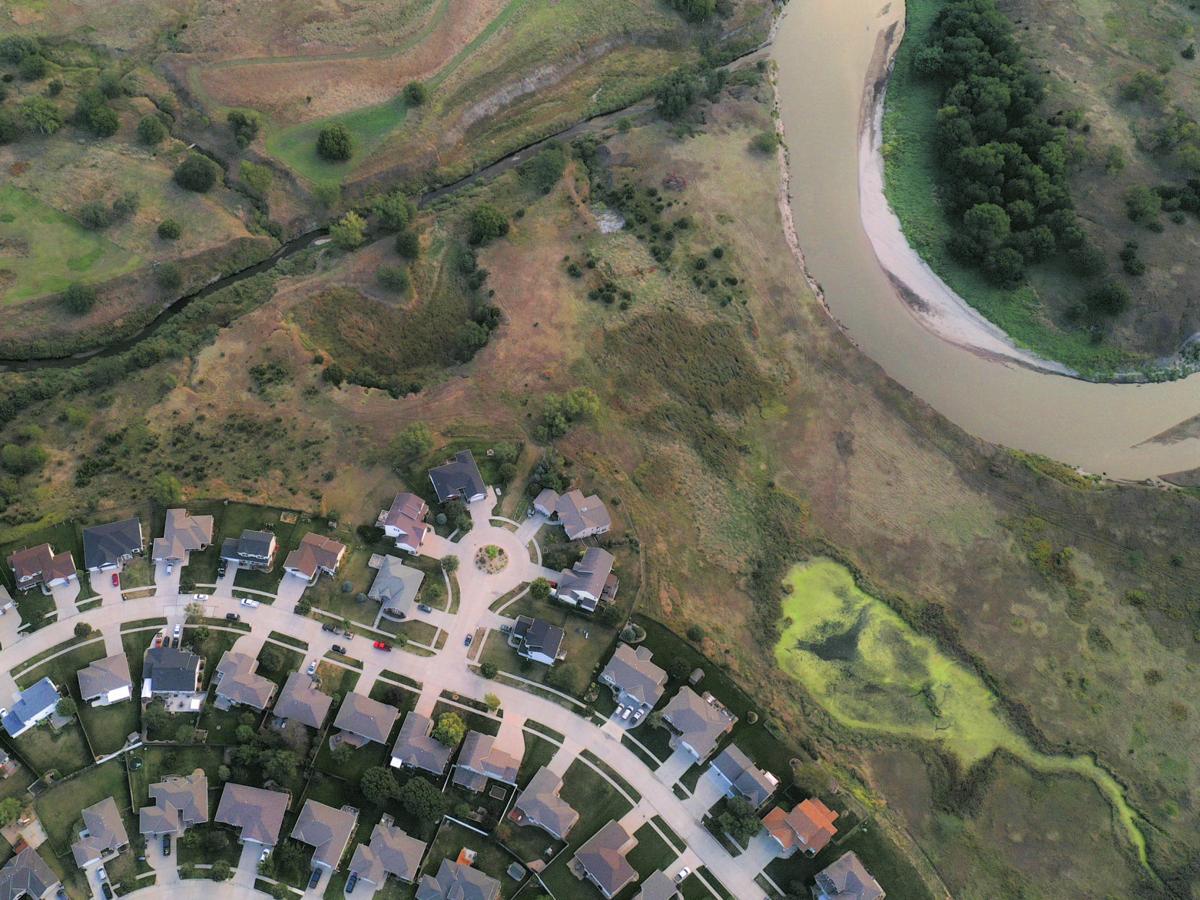 This drone image shows how close Marsh Wren is to a new housing development in northeast Lincoln. 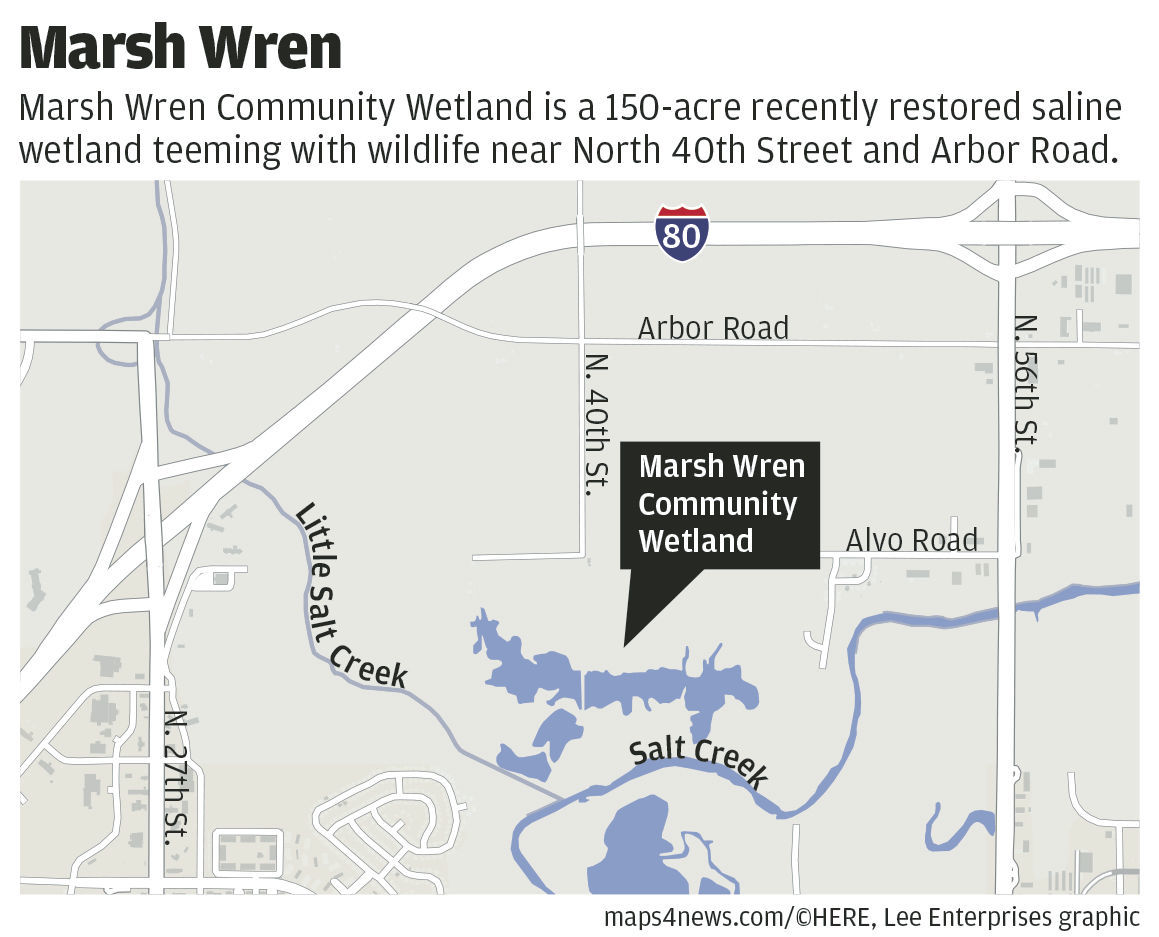 A snowy egret (white) and a pair of ibis share a piece of dry land at Marsh Wren Community Wetland.

Saltwater irrigation is restoring the saline wetlands at Marsh Wren, on the north edge of Lincoln.

A lesser yellowlegs hangs out at Marsh Wren.

A double-crested cormorant swims in the pond at Marsh Wren Community Wetland.