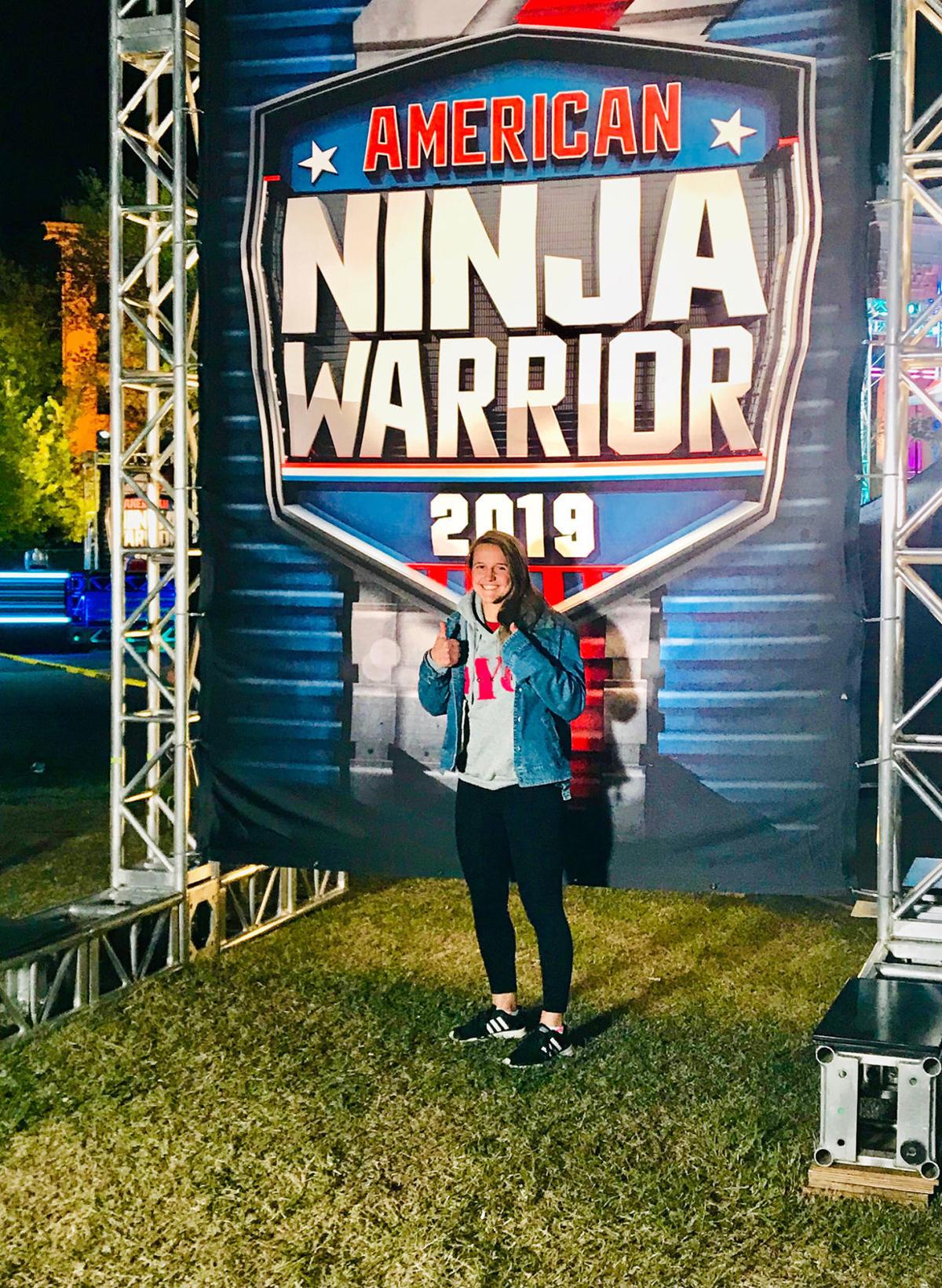 Leigh Jahnke, a West Point-Beemer High School alumna and current University of Nebraska-Lincoln student, poses in front of an American Ninja Warrior banner while at the competition in Oklahoma City in April. 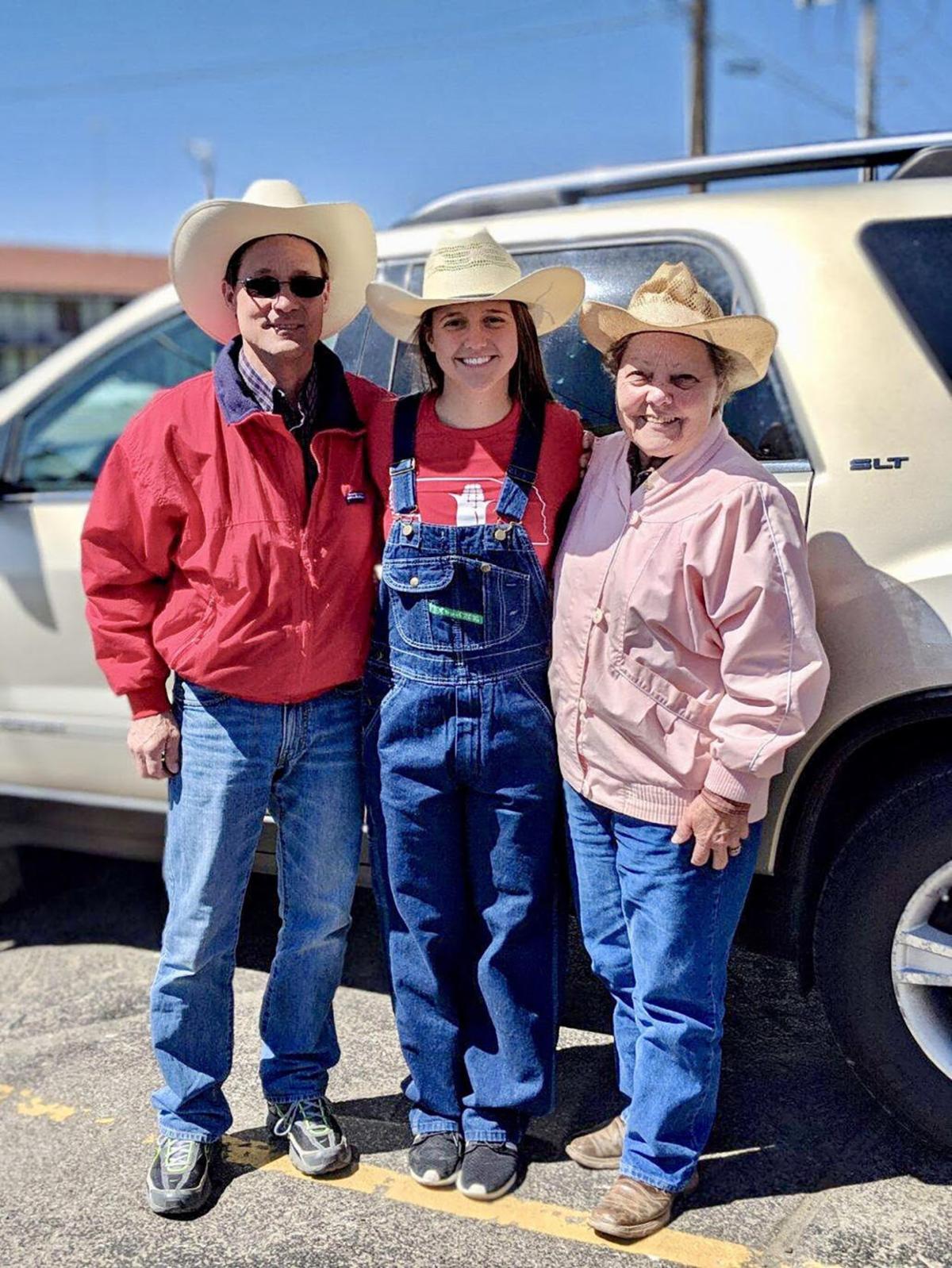 Leigh Jahnke (center), who competed on American Ninja Warrior in Oklahoma City in April, poses with her dad Terry and her grandmother Lila.

Kristy Jahnke wrote her daughter, Leigh, a special note in the back of her West Point-Beemer High School senior yearbook.

"We'll see you on American Ninja Warrior," it read.

Leigh Jahnke made the trek to Oklahoma City to compete on the TV show in April after impressing producers with a submission video and her small-town Nebraska lifestyle. She'll appear on Monday's airing of the show on NBC at 7 p.m.

In her submission video, Jahnke climbs the frame of her family's hay barn, does pullups, one-arm pushups and a back flip. To most people, that kind of strength can seem out of the ordinary. But to Jahnke, it's just life on the farm.

"I work on the farm and I get bored," she said. "It can be kind of tedious, so I just find things to entertain myself. A lot of the strength just comes from being on the farm. Just carrying protein buckets, throwing hay, all of those small jobs add up."

Jahnke got an email in February from one of the show's producers saying they wanted her to start training with Maggi Thorne, an American Ninja Warrior athlete in Lincoln.

But it wasn't until March that she got the confirmation call that her dream was coming true and she was going to be on the show.

An issue popped up, though: Jahnke was in the middle of her freshman year at the University of Nebraska-Lincoln.

But this was a chance she couldn't pass up, so she skipped one of her biology labs to make the trip to Oklahoma City.

"Missing the lab didn't impact my grade, because I had done well enough prior to missing it," Jahnke said. "It's good I worked hard enough to have a good grade in class before, or I wouldn't have gone."

Her dad, Terry, and grandma, Lila, went along on the trip.

Jahnke said she was just happy to compete, especially since she didn't think she would be able to until she was 21.

Contestants had to be 21 to compete on the show until 2018, when the age limit was lowered to 19. So Jahnke impatiently awaited her 19th birthday — Nov. 15 — to apply.

When Jahnke was standing on the platform during the competition, she said she was filled with excitement.

Although she couldn't disclose how she did in the competition because of a contract she signed with the show, she did say she couldn't stop smiling, despite it being a late night.

While Jahnke was caught up in the competition, show producers had her dad and grandma doing video shoots.

"They took us to the stockyards," Terry Jahnke said. "And they had a group of us running toward the cameras like we were running to get a seat in the grandstand. Mom (Lila) was keeping right up."

Lila was running with all of the younger people, and getting some funny looks along the way.

"When we were running there, a bunch of the young guys looked at me and asked if I was going to run," she said. "They didn't think I could keep up. Nobody passed me. I said, 'I can run. You can't do anything I can't do.'"

The family's experience was a memorable one, to say the least, but it didn't stop there.

Show producers chose to do an in-depth piece on Jahnke and her roots. They traveled to West Point the weekend after the competition and shot video of Jahnke doing chores around the farm, such as driving a tractor and tending to cattle.

And the community has rallied around Jahnke since she was chosen to be on the show — there will be a watch party Monday night at the West Point Community Theatre.

"Sometimes, kids end up doing stuff you never could imagine they could do," Terry said. "But when they have the desire and persistence to work at it, it happens."

Fundraising event sends participants down the side of Cornhusker hotel

When you’re staring over the side of a building from 100 feet up, you need some kind of motivation to rappel over the edge. For Jerry TeKolste…

Girl Scouts were spinning, running and hanging upside-down Wednesday on a new challenge course that will be featured in the Cornhusker State Games.

Jessie Graff’s Wednesday was a little strange. In the physical world, she tended to her garden before a scheduled meeting about designing a li…

When Jim Ager Memorial Golf Course superintendent Casey Crittenden first walked onto his course nearly five years ago, it was a long way away …

As Keith Knoop pushed through all of the procedures to repair his right leg torn apart by a roadside bomb in Iraq nearly a decade ago, he didn…

Leigh Jahnke, a West Point-Beemer High School alumna and current University of Nebraska-Lincoln student, poses in front of an American Ninja Warrior banner while at the competition in Oklahoma City in April.

Leigh Jahnke (center), who competed on American Ninja Warrior in Oklahoma City in April, poses with her dad Terry and her grandmother Lila.