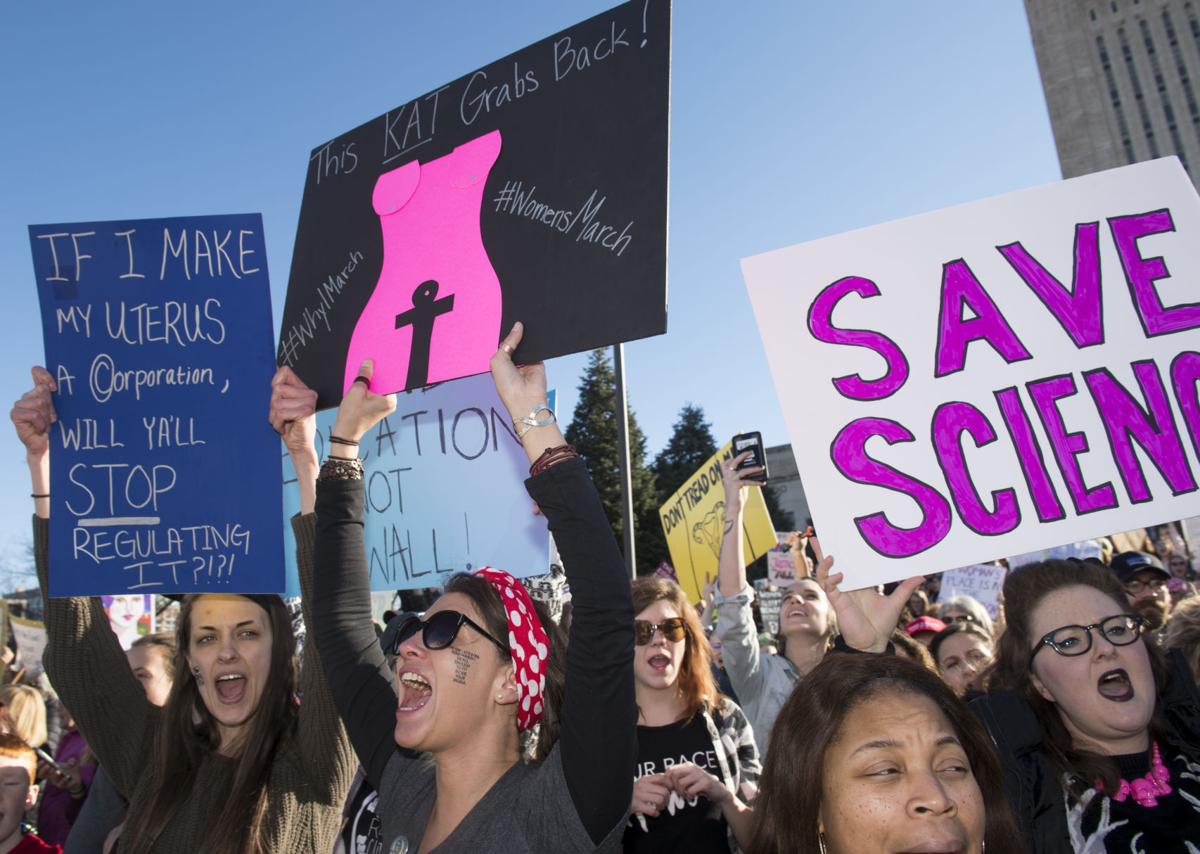 Marchers hold signs and start chants during the Women's March outside the Capitol on Saturday. 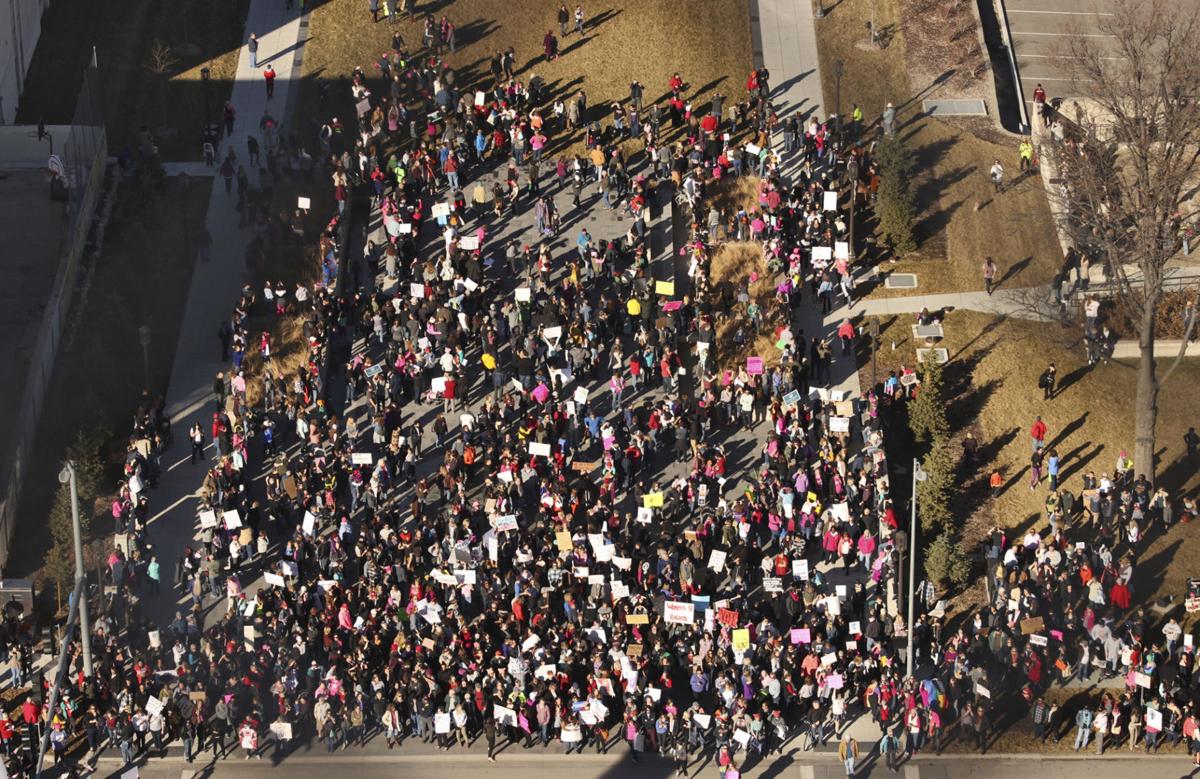 The Lincoln Women's March seen from an upper level of the the Capitol on Jan. 23. 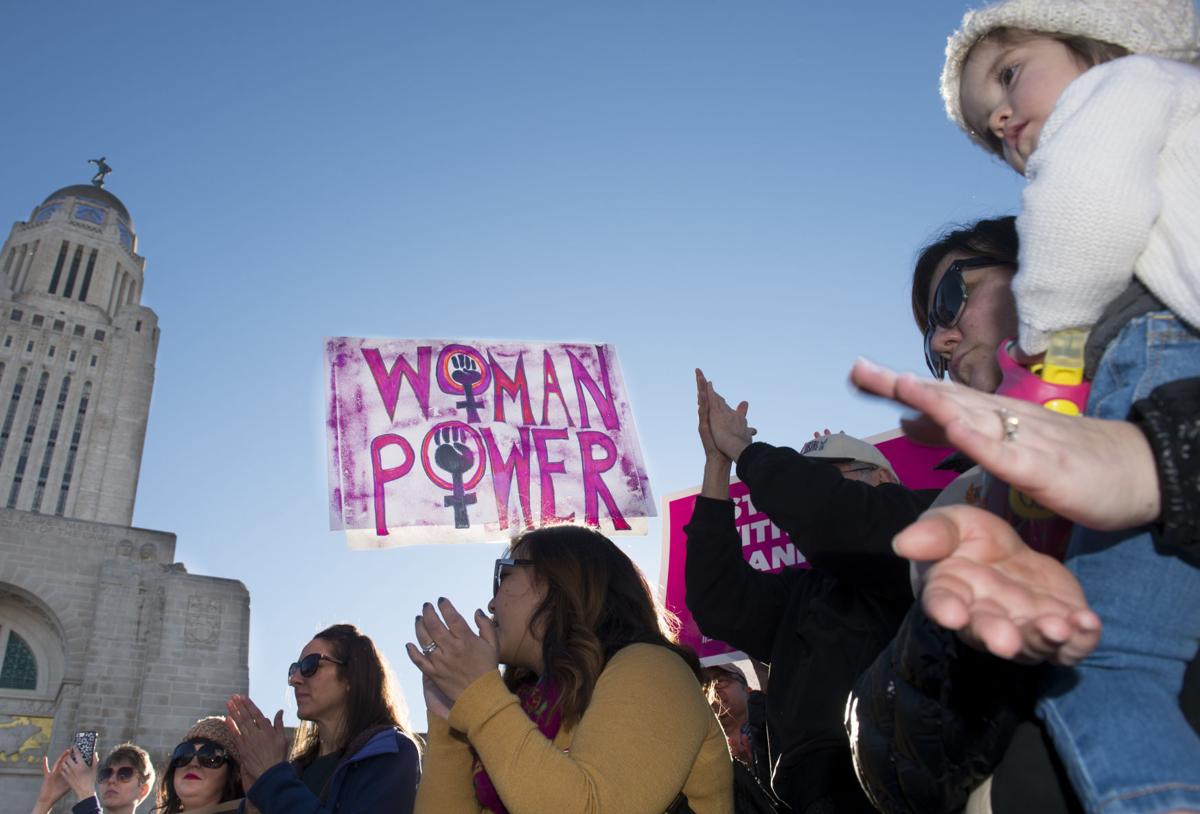 Marchers hold signs and listen to speakers during the Women's March outside the Capitol on Saturday. 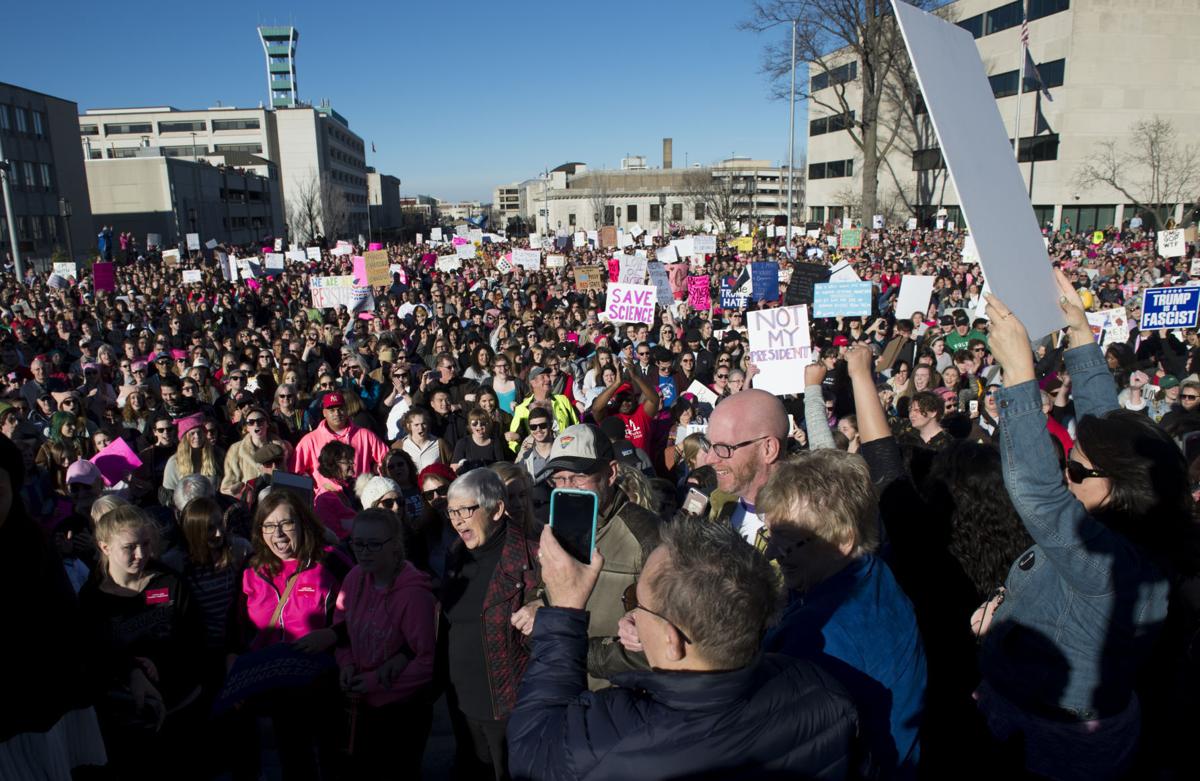 Marchers join arms and sing at the end of the Women's March outside the Capitol on Saturday. 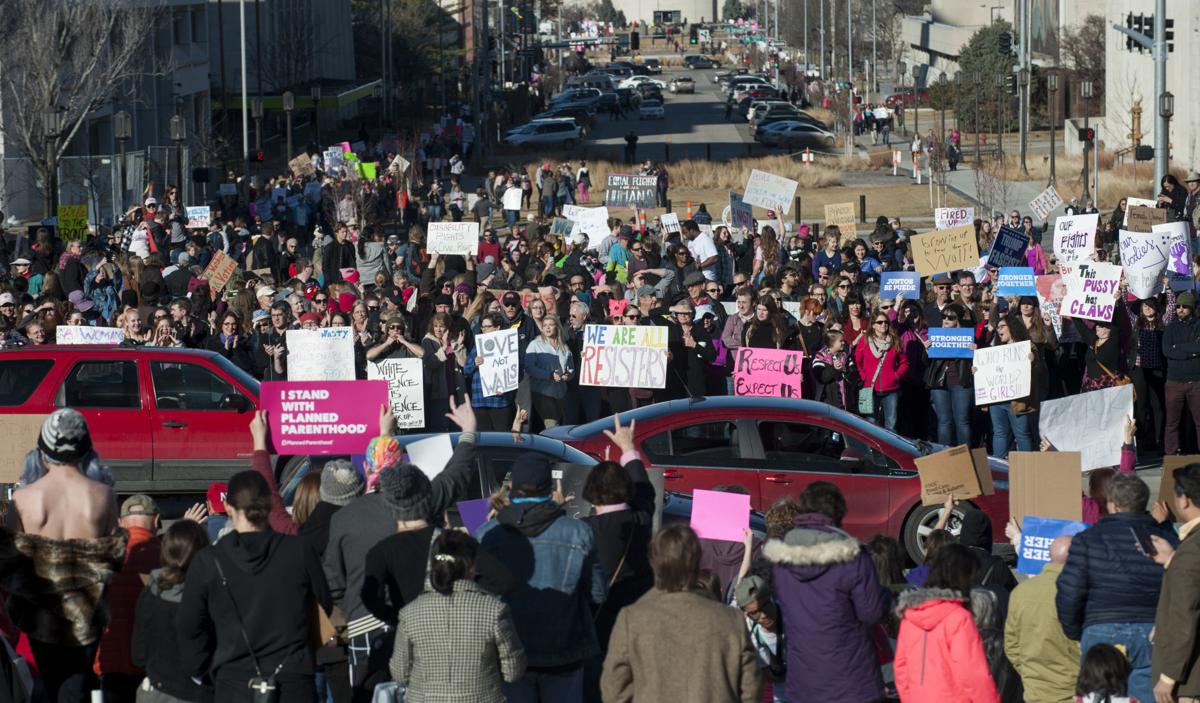 Marchers blocked traffic on K Street during the Women's March on Saturday.

When Wendy Hines logged into Facebook two weeks ago and created an event, the Women's March on Lincoln, she could not have imagined the amount of support it would receive.

Hines, who lives in Lincoln, said around 3,000-4,000 marchers met outside the University of Nebraska-Lincoln Student Union on Saturday afternoon armed with signs, stickers and loud voices.

Across the country, over 670 affiliate marches popped up in collaboration with the Women's March on Washington. It is estimated that over 4.5 million people attended the marches, according to the Women's March on Washington's official website. The event was created to promote unity and equal rights for all regardless of gender, race or religion in the wake of President Donald Trump's election.

For Leigh Hessel, the march was just what she needed.

Hessel moved to Kearney from the San Francisco Bay area, where she was an activist who supported same-sex marriage and LGBTQ rights.

When she heard about the march, it wasn't even a question of whether she would attend. Hessel spent two hours creating a sign Friday night and drove another two hours on Saturday morning to attend.

The march made her feel at home and gave her an escape from the isolation she said she sometimes feels in Kearney.

Other marchers, like Doris Pleskac, held signs related to health care. Three generations of women represented her family, as her daughter and granddaughters stood beside her.

Pleskac said that her granddaughters rely on Medicare and she worries they will be in jeopardy of losing it under Trump's presidency.

Pleskac hopes to see more marches in the near future and plans to continue advocating "as long as we have breath in us."

Many families with children showed up. Lincoln City Council candidate Louis Braatz III chanted into a megaphone with his three daughters and said he hopes to teach them to take action.

"My job is to empower my daughters," he said. "They know what this is about. The younger generation, it's on you guys."

Alice Reed of Lincoln carried a sign that read "we will stand up for our rights," as she joined other marchers headed back down Centennial Mall after the march.

"Everyone feels like we have a cause to fight for," Reed said. "We're in a red state but we're not alone."

Many marchers held signs protesting Trump, but some members of the UNL fraternity Phi Gamma Delta -- also known as FIJI -- showed support for the president and waved Trump flags from their balcony as a counter protest.

UNL sophomore Brett Renner said nearly 40 fraternity members participated. The group was not protesting women's rights, but wished to show their support for Trump and felt the march was unnecessary and parts were disrespectful.

The counter-protest was not planned in advance, Renner said, but the men decided to express their opinions after seeing signs displayed at the march.

UNL student John Elgin of Alpha Tau Omega fraternity, who watched the protesters gather at the Capitol from the north end of Centennial Mall, said the march came at the wrong time."

"It accomplishes nothing," Elgin said. "The election is over."

Three speakers addressed the crowd, starting and ending with Rev. Karla Cooper, who is ordained in the African Methodist Episcopal Church. Cooper closed the ceremony with song and together thousands of participants joined arms and sang "This Little Light of Mine."

Danielle Conrad, Executive Director of ACLU Nebraska and a former state senator, spoke next and urged participants to "make equal rights a reality."

"This is what democracy looks like," she chanted and the crowd echoed. "We've got some work to do, but we are up to the challenge!"

Meg Mikolajczyk, Public Affairs Manager at Planned Parenthood of the Heartland, called the crowd "a force to be reckoned with." She informed participants about several pieces of legislation and encouraged them to get involved.

She spoke about her disgust with LB46, which would authorize "Choose Life" personalized license plates with funds going toward child abuse prevention. Mikolajczyk said the organization supports the prevention of child abuse, but feels it is unfair to tie the two causes together and harmful to women's right to choose.

She also urged participants to support LB120, which would expand access to family services, including care like IUDs.

Many members, like Nancy Forst Williamson, said they felt united and strong standing among the crowd.

Decades ago, Forst Williamson stood in the same spot as a UNL student and held a sign protesting the Vietnam War. She was excited to see such a diverse crowd and was especially proud to see so many younger people passionate about the issues.

And it wasn't just big cities that got in on the national day of demonstration.

On maps showing planned marches across the U.S., a little dot in the middle of Nebraska represented an event in Loup City, which attracted an estimated 150 people, according to organizer Tamra Jonak.

“For a small town, we did really well,” she said of the event titled “People’s March for Equality.”

Jonak said she and her sister wanted to go to Washington D.C. for Saturday’s event, but instead made plans to march through the downtown of Loup City, population: 1,020.

“Some friends heard about our plans and asked if they could join in, and then some others heard about it and wanted to walk too,” Jonak said. “We made a Facebook page to keep people reminded and it just kept blossoming and blossoming from there.”

Zach Hammack and Chris Dunker contributed to this report.

A previous version of this story had a lower estimate of the Women's March on Lincoln crowd and the incorrect spelling for Wendy Hines.

Women return to Nebraska after marching in D.C.

Writers gather to speak for freedom of speech

Kim Tedrow wasn’t looking to organize a resistance, but the role fell into her lap.

UNL's Title IX office to investigate statements made to marchers

'This is not an issue to be joked about': Lawmakers highlight bills to protect sex assault victims

Leave it to Marilyn Moore.

As U.S. Senate candidate Jane Raybould spoke during the Women's March on Saturday afternoon at the state Capitol, an unidentified man walked u…

Marchers hold signs and start chants during the Women's March outside the Capitol on Saturday.

The Lincoln Women's March seen from an upper level of the the Capitol on Jan. 23.

Marchers hold signs and listen to speakers during the Women's March outside the Capitol on Saturday.

Marchers join arms and sing at the end of the Women's March outside the Capitol on Saturday.

Marchers blocked traffic on K Street during the Women's March on Saturday.