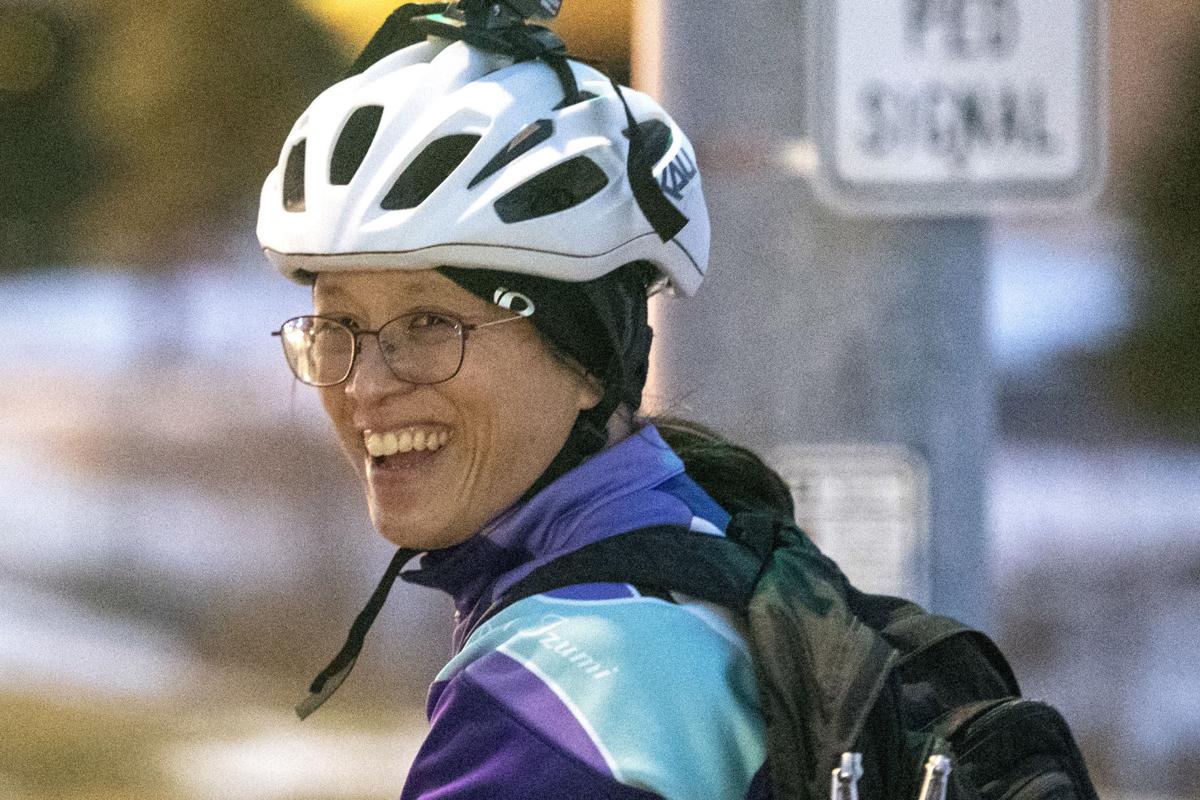 Yun Saksena waits for a traffic light on her bike commute back home last week. The associate dean for education at the UNMC College of Dentistry makes Strava art — using maps and a ride-tracking app to write words and draw pictures on her bike rides around Lincoln. 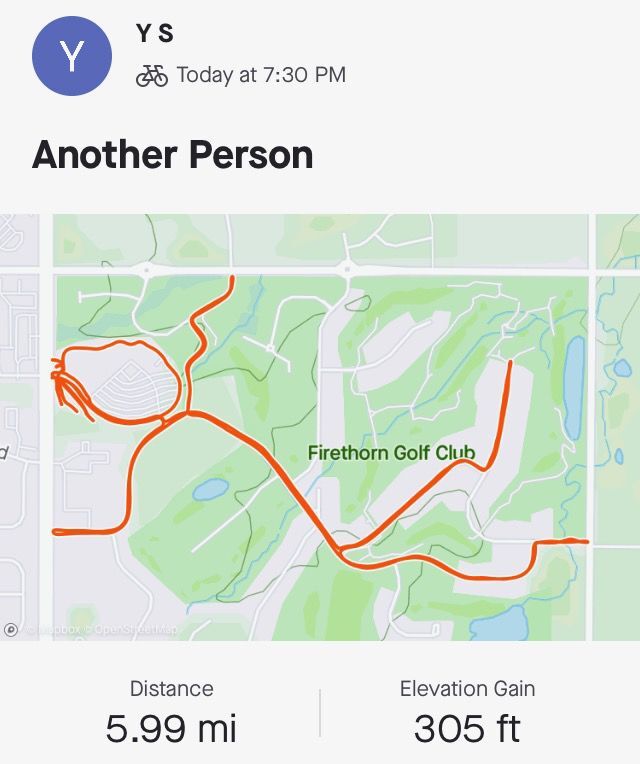 Yun Saksena sketched this stick person on the streets of Firethorn. 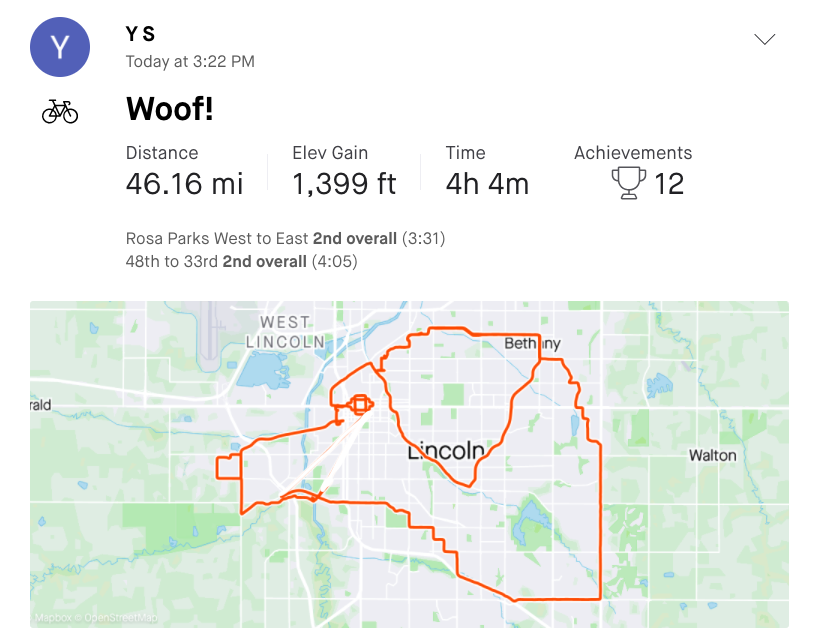 Yun Saksena's largest Strava art was a 46-mile dog's head that covered much of Lincoln. 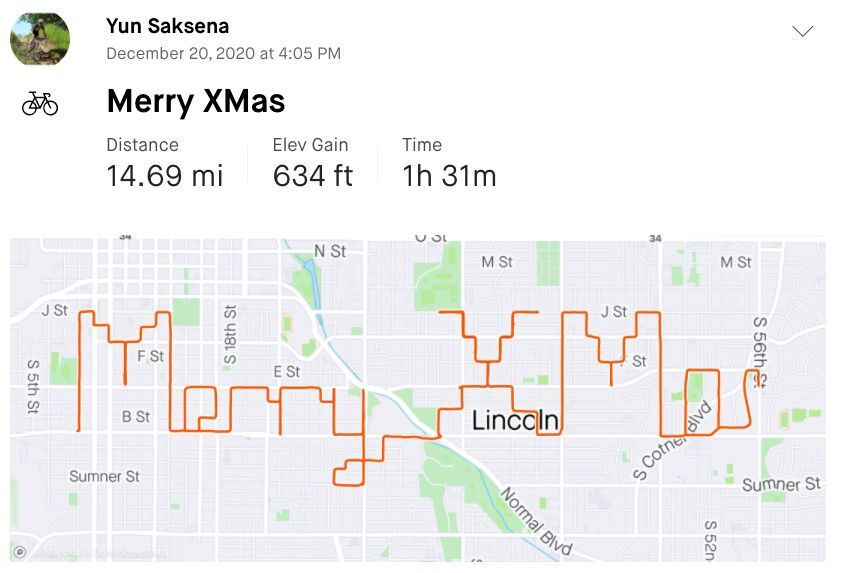 Yun Saksena thought about spelling out the word Christmas, but worried she'd have trouble finding a route that worked.

Yun Saksena began writing her 15-mile Christmas card at the corner of Eighth and A streets.

She biked north into the South Bottoms, following a map and a list of directions that had taken her more than an hour to put together. At J Street, she pedaled east for a block, and then south, and then east, and south again.

More than 30 blocks and a dozen turns later, she was at the corner of 14th and A, and her tires had traced her first letter: M.

Saksena kept riding through the Near South Neighborhood, up to D Street, back to A, again and again, until she reached Antelope Park.

An app on her phone was logging her every move.

She kept pedaling, up to Woods Park, through the Witherbee Neighborhood, into Piedmont and, finally, to 56th Street and the end of her second word: Xmas.

Then she biked home, uploaded her holiday map message from the app — Strava — and posted the picture on a bike-friendly Facebook page.

She got more than 230 likes — and enough inspiration for her encore.

So two weeks ago, Saksena was back on her bike at Eighth and A, starting a 17-mile Happy New Year. “It was below freezing. It was in the dark,” she said. “But I knew there was a snowstorm coming, so I needed to do it that night.”

Saksena doesn’t know if she’s the city’s only so-called Strava artist, but she hasn’t found any other examples since moving here from Boston three years ago (though another cyclist, Joe Billesbach, responded to her Christmas post with a photo of his own 18-mile ho-ho-ho holiday message around Beatrice).

Saksena grew up in Australia, where she started racing in a velodrome. When she moved to the U.S. in 1994, she was drawn into road racing and cyclo-cross, too.

The 49-year-old added mountain biking to that list after her family moved to Lincoln, where she took the post of associate dean for education at the UNMC College of Dentistry on East Campus.

But the pandemic cut into her miles this year, and she only rode about 2,500. It canceled her racing seasons. She was working from home, so she wasn’t making her 10-mile roundtrip commute. Even then, her job got busier, and she also was juggling three kids, a dog and a husband.

“Many of my friends had more free time so they were getting more miles in,” she said. “I wasn't going to compete with them.”

And when she could ride, she wanted the miles to have some purpose. Strava art — which she’d started back in Boston — would give her a way to explore new streets and neighborhoods in her new town.

“I have goals, and rather than just riding randomly, this feels like you’ve made something. I have a creative streak.”

She made nearly a dozen Strava art pieces this year. Some were simple — a 6-mile stick figure around Firethorn; a 1-mile acorn near Karl Ridge Road; a ladder climbing the east edge of Lincoln.

Some were more elaborate, like a 46-mile dog’s head that had her circling the city, from Bethany to West A to Edenton South, with a couple of loops around downtown to draw the eye.

Her process is organic. She likes to look at a map of the city streets and let her next piece come to her. For her Happy New Year ride, for instance, she realized a stretch of the diagonal Cotner Boulevard would work well for the second Y.

“I look for curves and different things. I just stare, and things jump out at me.”

But they don’t always go as planned. She’s learned the hard way that Strava can sometimes simply stop recording. She’s hit streets closed for construction, sidewalks through parks she thought existed but didn’t, gravel where she expected pavement.

She’d just started tracing the top of the dog’s long snout when she realized Rosa Parks Way was an elevated expressway, and not the safest place for a cyclist.

“I haven't been in Lincoln that long, and don't really know that part of town. It looked like a nice road on the map.”

She doesn’t have her next piece planned, but she is planning one. Maybe when the weather is nicer.

“I feel like I should do a spring one,” she said. “When spring hits us.”

Reporter Peter Salter picked five favorites from among his gamut of stories covered in 2020.

History in the making — State collecting toilet paper, masks, communion cups and other pieces of the pandemic

History Nebraska still plans to collect items that show the pain of the pandemic, said its senior objects curator. "We just need to give people a little bit of space."

As wildfire approached, a Nebraska town woke to evacuation orders

More than a dozen departments from three states fought the fire overnight, but it still covered 6 miles in two hours, the fire chief said. 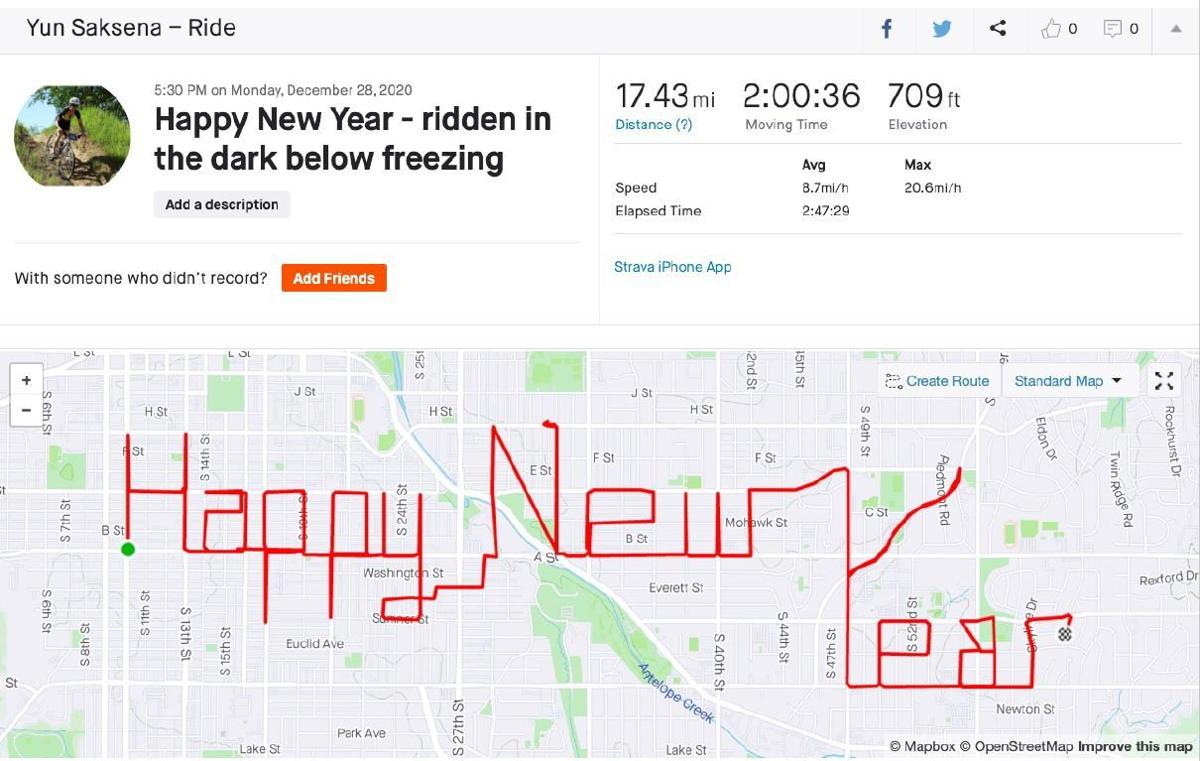 Yun Saksena biked in the dark, and in below-freezing temperatures, to wish Lincoln a Happy New Year.

Yun Saksena waits for a traffic light on her bike commute back home last week. The associate dean for education at the UNMC College of Dentistry makes Strava art — using maps and a ride-tracking app to write words and draw pictures on her bike rides around Lincoln.

Yun Saksena sketched this stick person on the streets of Firethorn.

Yun Saksena's largest Strava art was a 46-mile dog's head that covered much of Lincoln.

Yun Saksena thought about spelling out the word Christmas, but worried she'd have trouble finding a route that worked.