US to resume policy for asylum-seekers to wait in Mexico 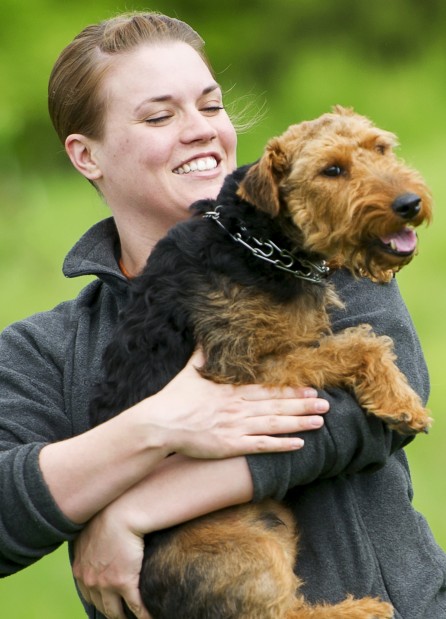 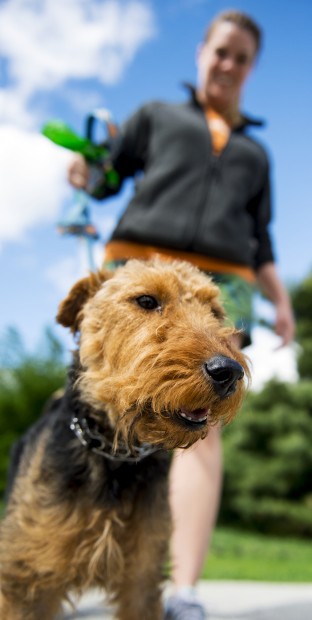 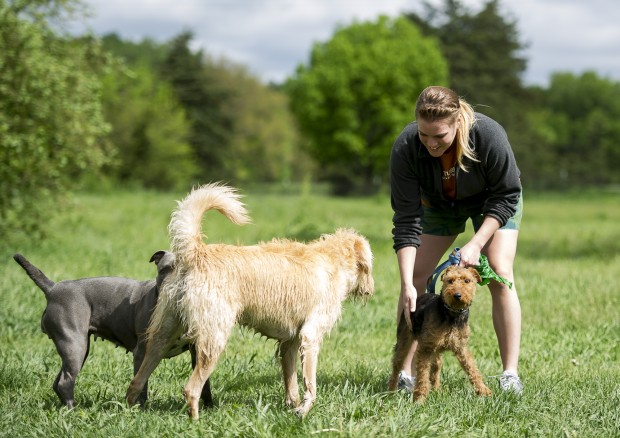 Nebraska Navy Reserve member Rachel Karr of Lincoln introduces her dog, Dozer, to the other dogs at the dog park Tuesday at Rickman's Run in Lincoln.

Nobody needed to tell medical corpsman Rachel Karr how important it was to have somebody she trusted guarding her back in the remote reaches of Afghanistan.

The Taliban lived right down the hill.

But when she came back to civilian life in Lincoln from building troop bases in Afghanistan in 2011, there was something important that Navy Seabee Karr did not know.

She didn't know how difficult it would be to turn her back on crowds of strangers.

Yet two years later, the 25-year-old Juniata native and Adams Central graduate walked tall and proud into a recent vintage car show on the grounds of the Department of Veterans Affairs clinic along South 70th Street.

First of all, and this is no secret, she's in love with Ray. That's Ray Tamburro from Ohio, one of 16 men and 17 other members of her unit in Afghanistan and of the NMCB, the Naval Mobil Construction Battalion.

Secondly, her broad smile as she approached rows of Corvettes, Super Sports and other shiny treasures is traceable to her dad. He helped her rebuild her first car, a Pontiac Firebird that she bought for $250, when she was in high school.

Finally, Karr said -- about as quickly as the subject of post-traumatic stress disorder, or PTSD, came up -- she feels great because she got help from VA professionals who know their stuff.

“The VA helped me more than I can say,” she said, “both here and in Omaha. Both physically and mentally, I don't know where I'd be without them.”

Some in a position to know the perils of post-traumatic stress see it as a virtual epidemic among veterans of Iraq and Afghanistan.

Roadside bombs, attacks by people wearing what were supposed to be friendly uniforms and the absence of a line dividing combat zones from safe zones are a breeding ground for deep-seated fear, anger, sadness and depression.

And returning veterans who suffered through that have been slow to engage with people in a position to help.

“It was starting to wear on me,” said Karr, who also volunteered for duty in Iraq in 2007 and 2008. “Being in a hyper-vigilant state for that long wears on you.”

She'll never forget how good it felt to reconnect with her family.

“It's so nice to see faces that you haven't seen for so long, especially faces that love you so much they're willing to let you go for a year and they still love you as much as when you left -- no matter what you are when you come back.”

But she found she couldn't tell them about the details of what happened before she came home.

About the truck behind her truck that blew up when it drove over an anti-personnel mine.

About the mortar attacks that missed or about her attempts to breathe life back into the dead body of an Afghan boy of perhaps 7.

“I guess that sticks in my head, because I could smell death. It's just a different smell.”

As the Lincoln-based chief of psychology for the Veterans Administration in Nebraska and western Iowa, Todd Fleischer figured prominently in the recent hiring of 17 more psychologists and social workers who can help heal emotional wounds.

The staffing upgrade was completed in September, “and the main purpose was to increase therapists for evidence-based treatment of veterans,” Fleischer said.

A treatment regimen called prolonged exposure is one way of dealing with the damage done by traumatic events.

Seeing the bodies of your friends blown to bits is an example of extreme trauma.

“Prolonged exposure is about reviewing a traumatic event repeatedly,” he explained, “until the person is better able to handle traumatic memories in a way that they're not overwhelmed by them anymore.”

When things go right, as they often do, “there's a dramatic decrease in PTSD symptoms.”

It's hard to judge how many more Nebraskans need the help that they haven't sought.

For whatever reason, those who process claims for PTSD in the state have not been overwhelmed by the flood of paperwork that has engulfed their counterparts in Oakland, Calif., and elsewhere.

A New York Times article published about the same time as Lincoln finished its staff upsizing took stock nationally of delay and discombobulation. The result was workers finishing less than 80 percent of the claims work they were supposed to get done in 2011.

“We are helping the Oakland regional office with their claims backlog,” said Aaron Nielsen, public affairs officer for the Lincoln region.

“Our main mission is always to help Nebraska veterans,” Nielsen said, “and our national mission is to help other regional offices that have a large inventory of claims.”

Outside Nebraska, “Oakland is our main mission right now.”

Rachel Karr volunteered to go to war twice largely because of her reaction to the terrorist acts committed in New York City and Washington.

“First of all, after September 11, I kind of wanted to do something bigger than myself.”

She found her motivation was still strong six years after September 2001.

In an interview session, she stresses that she did not experience the worst of what can happen in war.

“I'm one of the lucky ones that knew they needed help and went and got it,” she said. “I didn't see half of what other people saw. I can't imagine going through massive trauma myself over there.”

But measuring herself against others turned out to be a hurdle that she had to get over, “that I deserved help, too, even though I didn't see what other people saw.”

As county veterans services officers in Lincoln and York, Gary Chalupa and Don Sandman have seen firsthand the improvement in the quantity and quality of the Veterans Administration response to mental health issues.

“There's been an improvement,” Chalupa said. “Veterans can get in and see somebody when they need to.”

Some of the impetus is coming from Nebraska's Department of Veterans Affairs and from the Disabled American Veterans under a “Not One More Life” banner.

“There's a huge push to reach out to these people and get them help before something bad happens.”

The extent of need made a response to post-traumatic stress disorder unavoidable, Sandman said.

“There's so much of it that the Veterans Administration, I think, was forced to focus on this,” he said, “and to make sure these guys coming back were treated for this properly and diagnosed.”

He conceded that treatment can't happen unless victims step forward.

Among men, “a lot of them won't because they think it hangs a tag on them that they're not manly.”

Beyond that, rumors fly about VA treatment interfering with owning firearms and getting a job, “and they don't want to risk that,” Sandman said.

He himself thinks there's some truth to stories about employers feeling patriotic at first and, on second thought, worrying about hiring somebody with unstable emotions.

“We kind of went to the top of that hill and we're on our way back down again.”

Chalupa said some of the people who could use help also are still part of National Guard and Reserve units.

“I think the leadership out there knows it,” he said, “but they're still members.”

Rachel Karr's parents sleep easier now that she's in what's called the inactive ready reserve and near the end of her six-year commitment.

Rachel's sleep is another matter. She's excited about her new job as a medical assistant to a foot and ankle trauma surgeon in Lincoln.

On the down side, Ray Tamburro -- her Ray -- is about to be sent back to Afghanistan in the 16th year of what he expects to be 20 years of career service.

“I'm not looking forward to being away from him for that long,” she said. “But I know what it feels like on his end.”

At the very end of deployment, as she now knows so well, is what she describes as “getting back to the rigors of civilian life.”

Getting shot at was part of her duty to her country. Getting comfortable again inside her own skin is part of her responsibility to herself and to those who love her.

“I personally worked through whatever my issues were after both deployments,” she said. “And now I do very well. I can't complain at all.”

War-torn veterans, their dreams, and a yoga instructor

She’s been teaching yoga since the Eisenhower years, but this might be Liz Merey’s toughest class yet. For this group of PTSD-diagnosed Vietnam vets who flock to the dusty gymnasium at the Lincoln VA every Wednesday, it’s a rare chance -- to breathe.

Nebraska Navy Reserve member Rachel Karr of Lincoln introduces her dog, Dozer, to the other dogs at the dog park Tuesday at Rickman's Run in Lincoln.