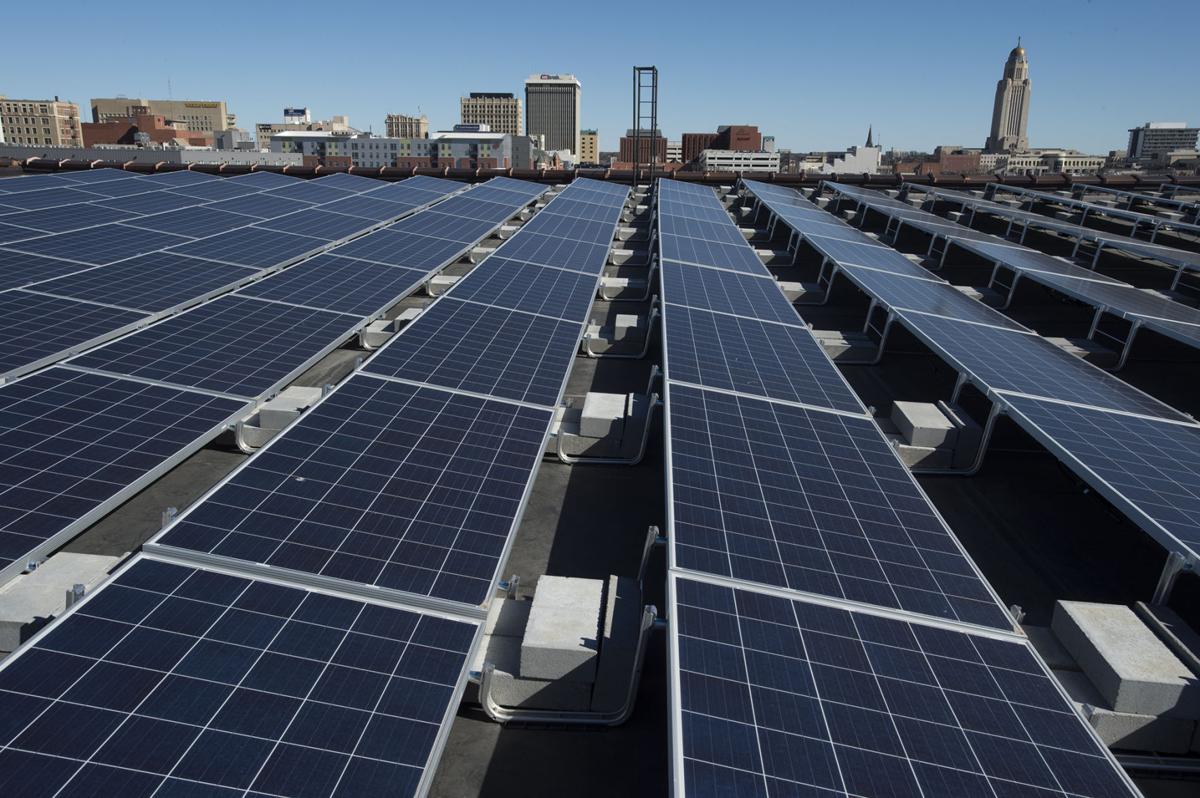 Solar panels fill the roof of a former Meadow Gold building at Seventh and M streets. Once the installation is complete, Telesis will produce 85 percent of the energy it uses at the building. 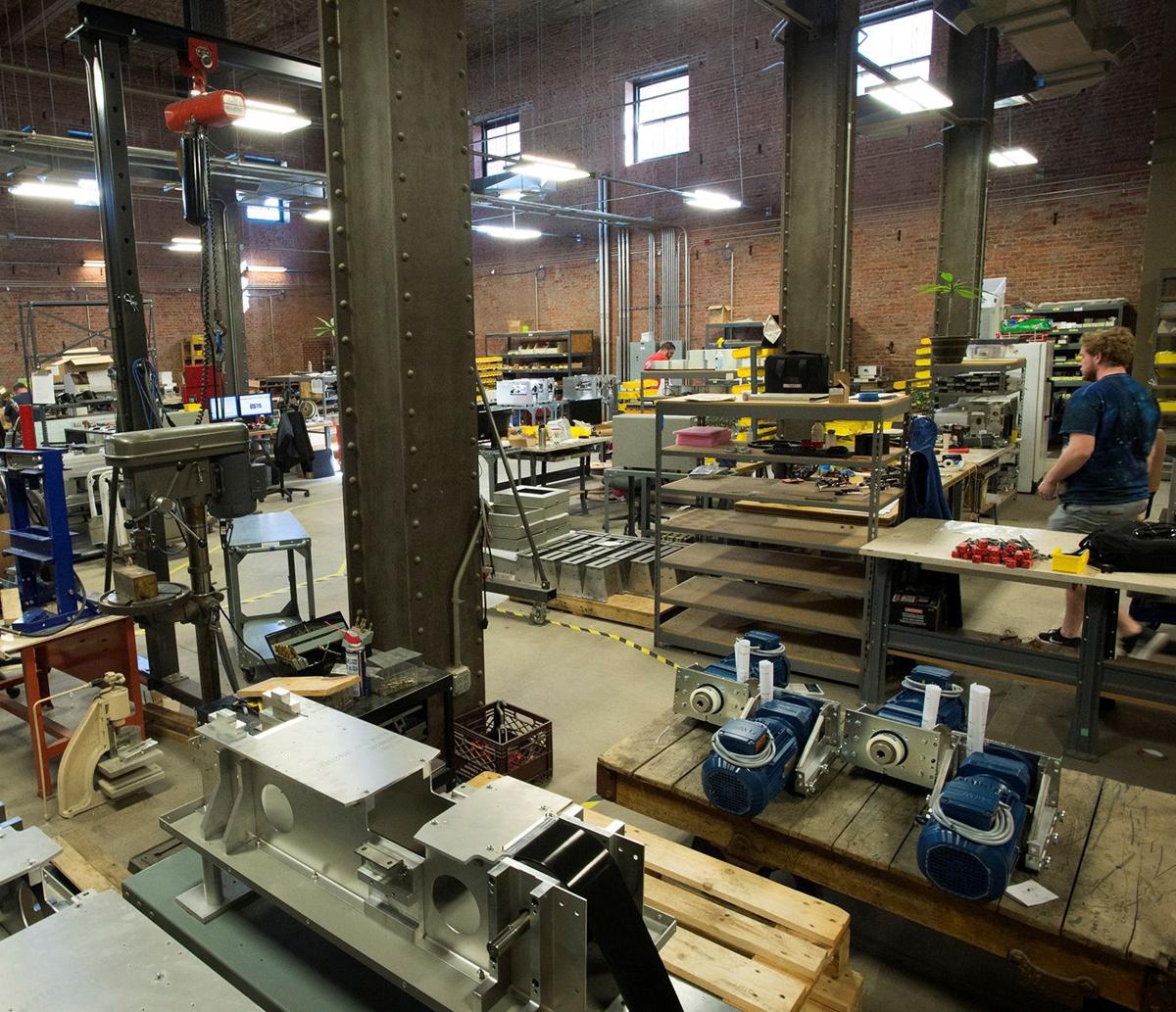 One of the former Meadow Gold buildings at 7th and M streets houses Data Security, Inc., which makes machines that destroy hard drives and electronic devices. 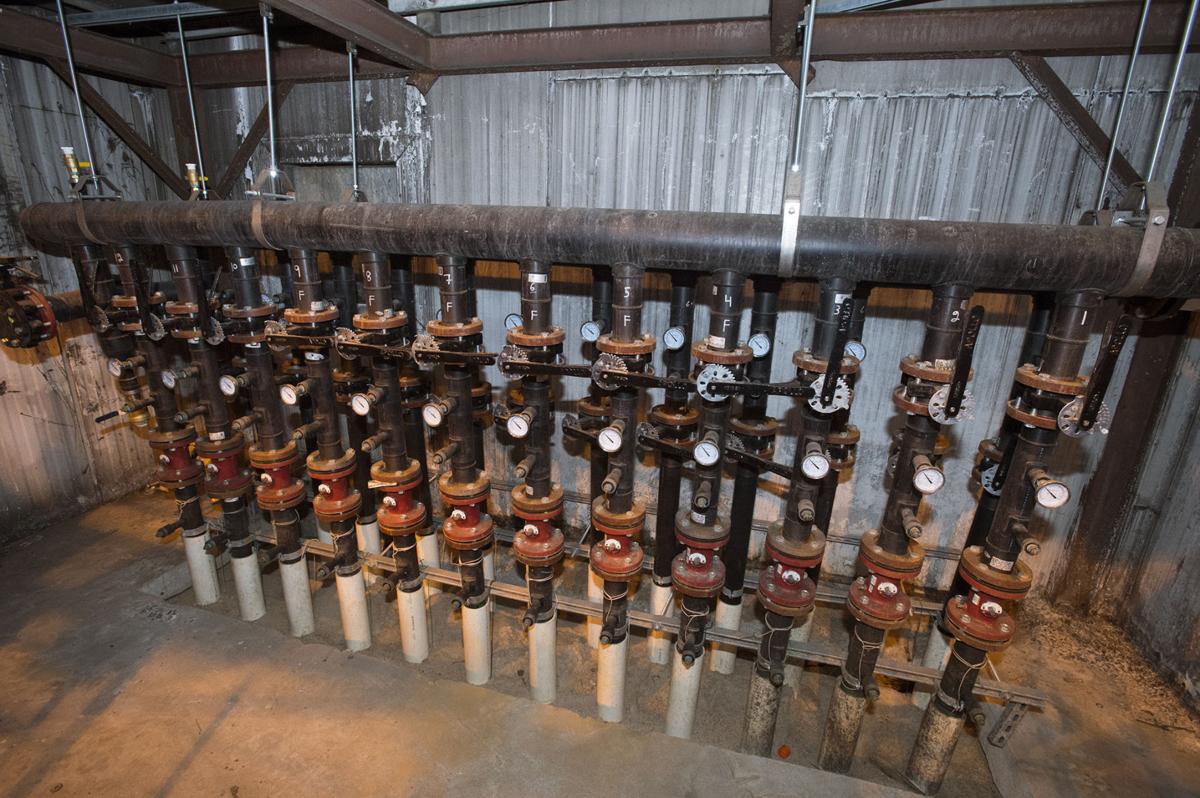 Geothermal pumps, with space for future installation, are part of energy efficiency renovation work done to the former Meadow Gold buildings at Seventh and M streets. 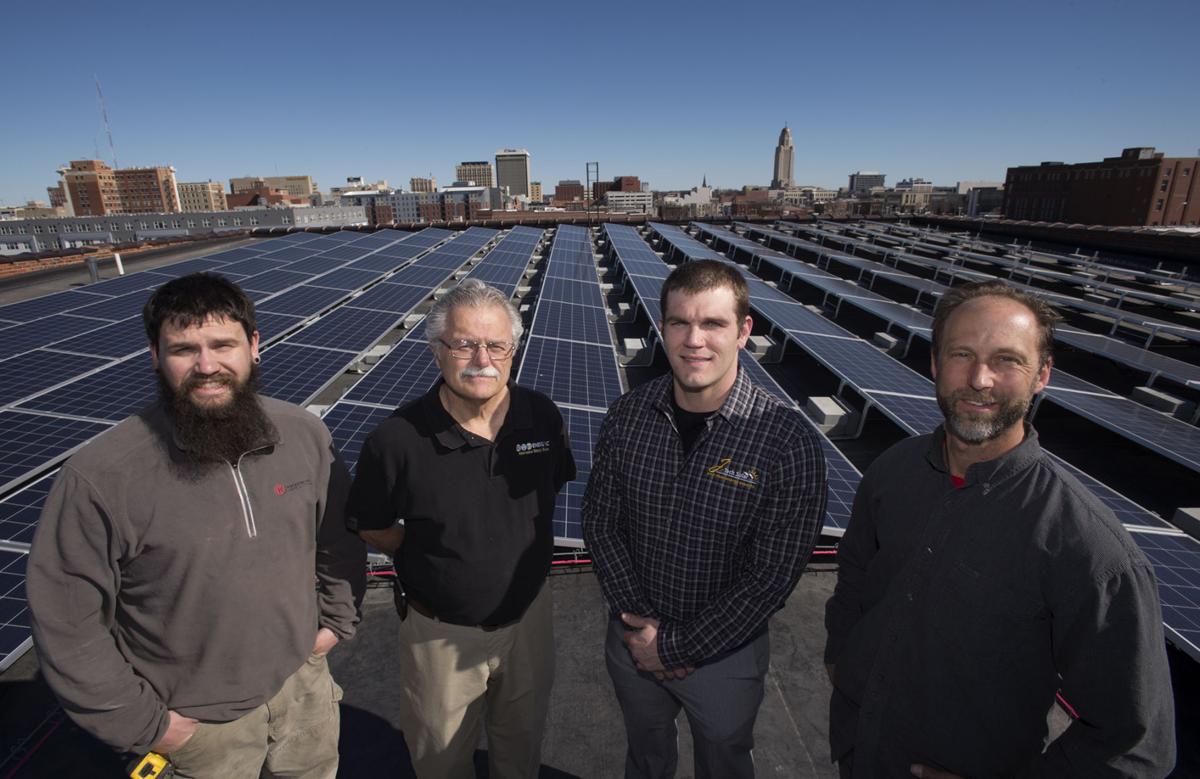 A group of solar and electrical workers stand on one of roofs of the former Meadow Gold building in the Haymarket. They are (from left) Wes Osborn, electrician for K Electric Co., Randy Schantell, president of SWT Energy Inc., Jason Olberding, CEO of J-Tech Solar; and Todd Crisman, owner/operator of K Electric. 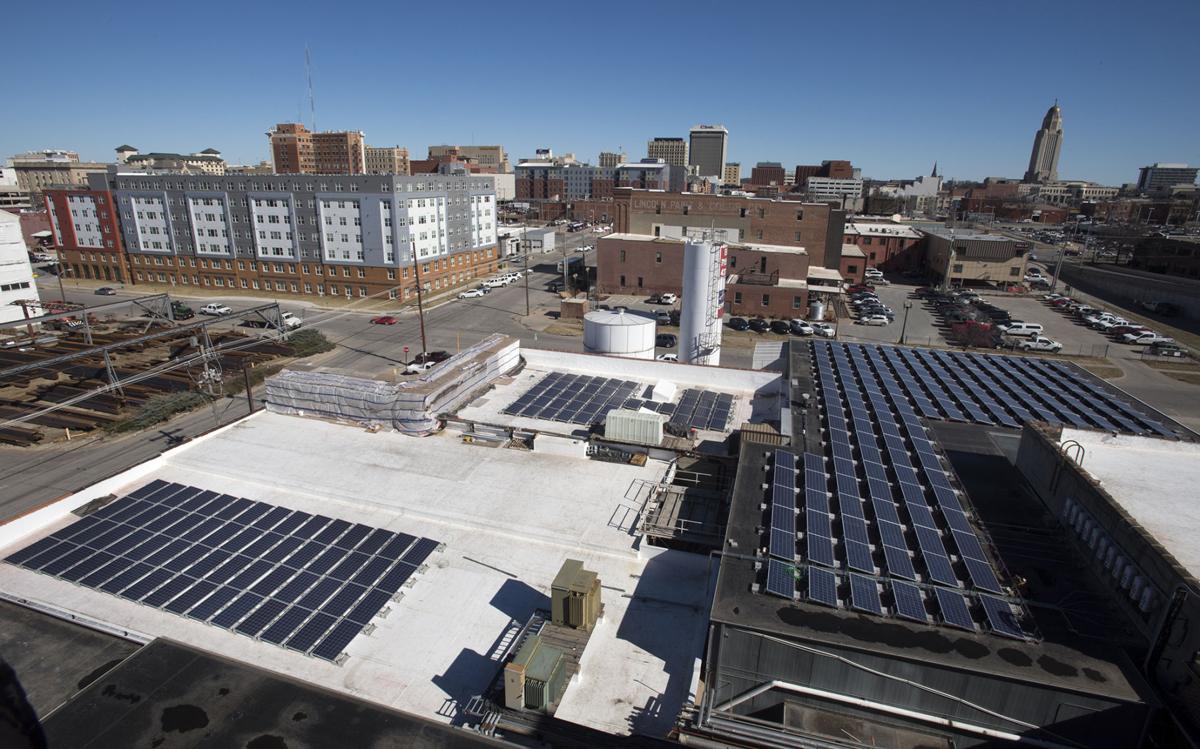 The people of Krypton — home planet of Superman — ignored the warnings of scientist Jor-El right up to the moment their world exploded.

Eric Schafer — president of Telesis Inc. — sees a lesson in the Kryptonian mythology for planet Earth, where the debate on climate change continues to rage despite overwhelming scientific consensus that its major driver is human activity.

Telesis, parent company of Lazlo's restaurants and Empyrean Brewing Co., among other ventures, is acting now. The privately-owned family business is taking steps to make its Dairy House complex, the former Meadow Gold plant at Seventh and M streets, have a net energy footprint of zero by installing geothermal heating and cooling, efficient lighting and 940 solar panels.

And the entire building can be managed from a smartphone.

The biggest challenge of the net-zero goal, Schafer said, is getting employees to agree on where the thermostat will be set.

“We got our people to 74 degrees this summer without much complaint. When we got to heating (in the winter) at 70, we got complaints,” he said. “We're trying to communicate as much as possible, that (these are) our goals and that is how we achieve them. And the hope is everybody we hired understood that coming in and is on board.”

A year later, the company started work on a cold-storage warehouse heralded then by the Nebraska State Journal as the “largest and best-equipped establishment of the kind west of Chicago.”

The Beatrice Creamery absorbed the ice company in 1909 and bought the buildings and land. One of the oldest industrial plants in Lincoln, the facility pumped out the Meadow Gold brand of dairy products for decades until the owner, Dean Foods, announced plans to close it in 2009.

Telesis, through a subsidiary named The Dairy House LLC, paid a little more than $1.2 million for the 174,000-square-foot former dairy plant and has spent $5.5 million renovating 30,000 square feet of that space and installing a geothermal system that includes 50 wells. Plans call for another 150 wells in the future.

The company has encountered some expensive surprises along the way, Schafer said, including the need for $90,000 worth of support piers in one of the buildings.

Because many of them were built for cold storage and have brick walls 4 feet thick in places, they haven’t needed to add insulation, he said.

Work is underway on a new Empyrean brewery, which will take up 24,000 square feet, and plans call for construction of a whiskey distillery. The Dairy House hopes to eventually fill portions of the complex with aging barrels of beer and liquor.

Now, the buildings house office space for Telesis subsidiaries, as well as manufacturing for one of its lesser-known branches, Data Security Inc., which makes machines that destroy hard drives and electronic devices. Government agencies and businesses use the machines to ensure classified and sensitive information doesn’t fall into the wrong hands.

Completion of renovation work is expected to cost an additional $8 million, Schafer said.

Building new might have been cheaper, he said, but it would have been impossible to duplicate the buildings' character.

“They are so unique. They provide plenty of challenges that people don't normally encounter.”

Because it's a designated historic property, renovations must meet requirements of Lincoln's Historic Preservation Commission to protect the architectural heritage of the Haymarket. That includes making sure solar panels are not visible from the street and painting external electric cables to match the brick of the building.

Schafer said the solar and geothermal systems will pay for themselves through energy savings.

Telesis first dipped its toe into geothermal in 2002, putting it into Lazlo's South at 59th Street and Old Cheney Road to help with “astronomical” utilities costs. The system paid for itself in 18 months, Schafer said.

The company now has geothermal systems at most of its suburban restaurants, including Fireworks in Lincoln and Lazlo's in Omaha. The only one of its establishments without is Lazlo's in the historic Haymarket because there's not enough space for wells.

Once installation of the solar panels, which have a 5- to 10-degree pitch to the south, is finished at the Dairy House block, Telesis will be producing 85 percent of the energy it uses at the building, Schafer said. That ratio is expected to improve as renovations continue.

Lincoln company SWT Energy designed the solar system; J-Tech Solar, which has an office in Havelock, is installing panels on the eight sunniest roofs; and K Electric Co. is doing the electrical work. The system cost about $650,000, although that has been offset by federal incentives, said SWT Energy President Randy Schanteli.

Solar installation started in December but has been interrupted as contractors install new roofs on some of the buildings and deal with other issues, such as point-tucking parapet walls, said Jason Olberding of J-Tech Solar.

At 300 kilowatts, the solar array will be the largest customer-owned system in Lincoln, although it's much smaller than LES’ five-megawatt Community Solar installation near West Holdrege and Northwest 75th streets.

LES generally limits solar systems to 100 kilowatts, but because Telesis' subsidiaries are individual businesses with separate electric meters it was able to band together to create the larger system.

LES guarantees the rate it pays for power generated by systems with capacity of greater than 25 kilowatts for 10 years, but the rate is about to be cut for future business projects such as this one.

The Telesis solar system will bring LES to a total of about 1 megawatt of customer-owned electric generation, which is the mile-marker at which the utility has said it will cut in half the rate it guarantees to buy electricity from business systems. The halved rate will still be above the going wholesale cost of electricity.

Residential customers who install solar systems will always be able to offset their own electric use at the same rate at which they buy electricity.

Tesla's first Nebraska supercharging station should be up an running in Lincoln by early next year.

The Legislature's executive board on Wednesday applied the brakes to legislative action to prepare for climate change, bottling up a bill to c…

Arrays of solar panels soak up the sun’s rays along Saltillo Road.

Auto dealer moves will allow expansion on both ends of town

Baxter Auto Group will move two of its auto dealerships from North 27th Street to Yankee Hill Road near 40th Street, allowing it to expand on …

John and James Strauss were twins and first-generation Americans who grew up on a farm near Lincoln in the years before and after World War I.

Lincoln Electric System is poised to scrap a decades-old purchase agreement for 30 percent of power generated by Sheldon Station, a coal-fired…

Lincoln police are looking for the culprit behind an estimated $10,000 in loss and damage to a downtown brewery Wednesday night.

Investigators are trying to identify a man who swiped $1,200 in electrical wiring and copper pipes from a downtown construction site June 24, …

Solar panels fill the roof of a former Meadow Gold building at Seventh and M streets. Once the installation is complete, Telesis will produce 85 percent of the energy it uses at the building.

One of the former Meadow Gold buildings at 7th and M streets houses Data Security, Inc., which makes machines that destroy hard drives and electronic devices.

Geothermal pumps, with space for future installation, are part of energy efficiency renovation work done to the former Meadow Gold buildings at Seventh and M streets.

A group of solar and electrical workers stand on one of roofs of the former Meadow Gold building in the Haymarket. They are (from left) Wes Osborn, electrician for K Electric Co., Randy Schantell, president of SWT Energy Inc., Jason Olberding, CEO of J-Tech Solar; and Todd Crisman, owner/operator of K Electric.