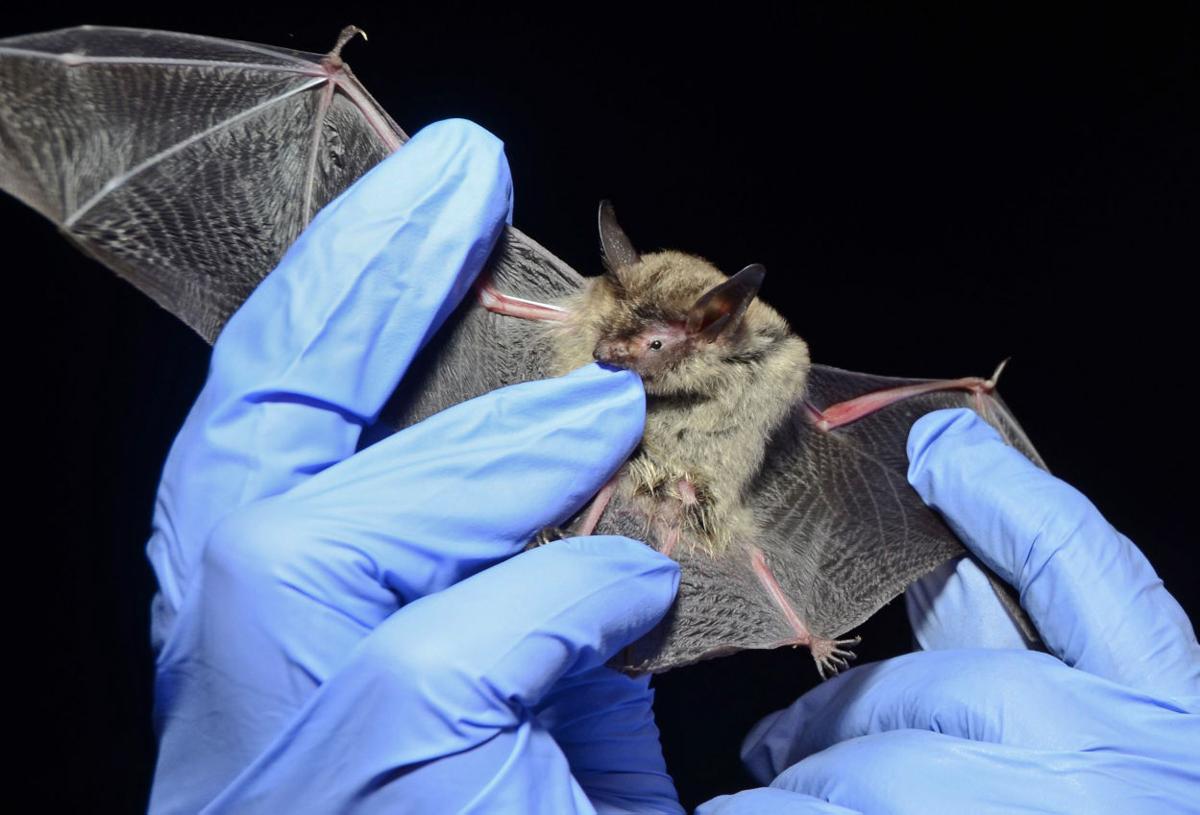 The northern long-eared bat was listed as a threatened species last year. The species was found hibernating in Lincoln's Robbers Cave. 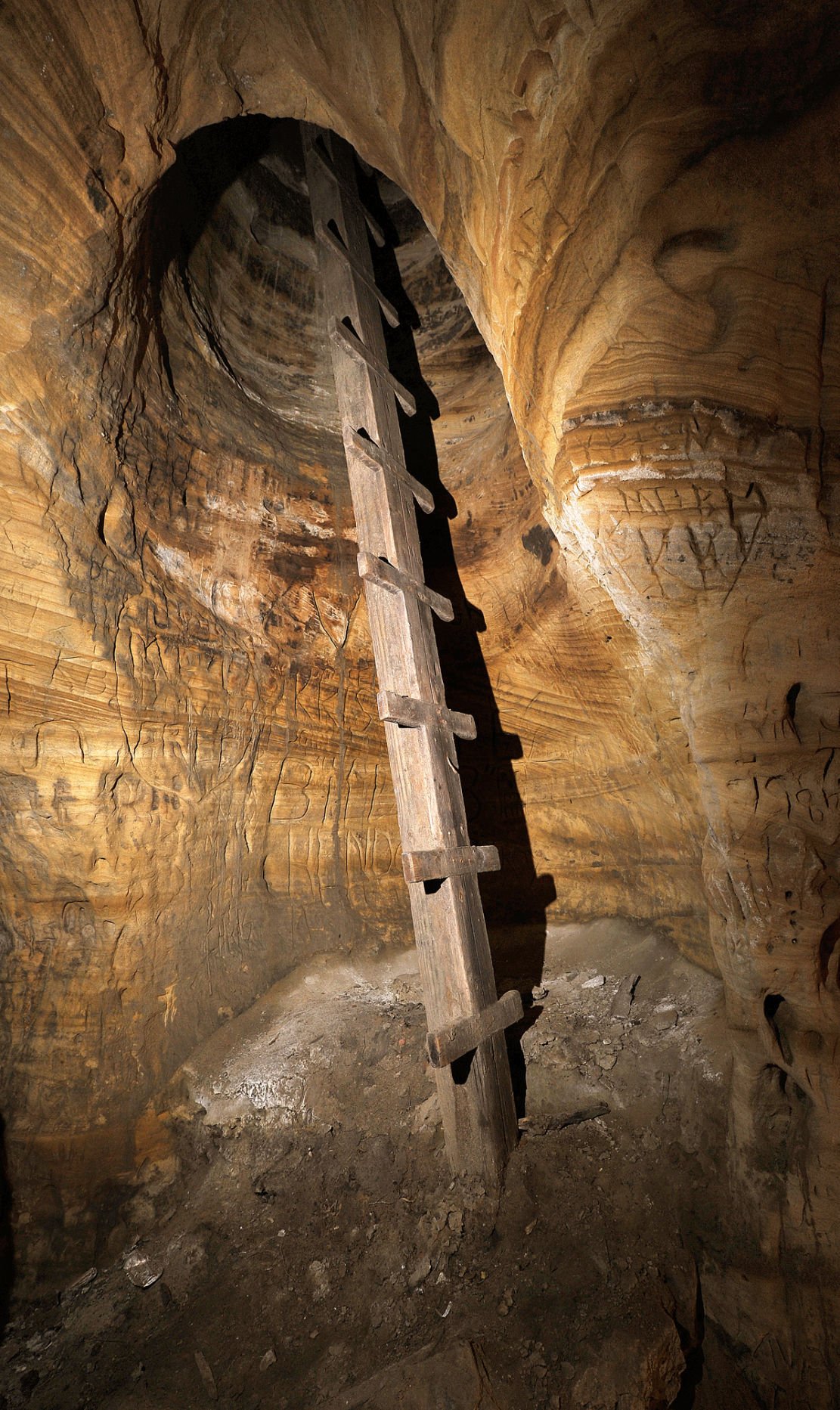 Blue Blood Brewery will use a dead-end tunnel with a shaft leading to the surface as designated bat habitat in Robbers Cave.

The new owner of Robbers Cave invited the retired biologist to look at its bat population last month, so Blue Blood Brewing would know what to expect when it started giving tours of the tunnels.

But just one would have been enough for what happened after that.

“We had to take immediate actions to protect the bats in that cave,” said Bob Harms, a biologist with the U.S. Fish and Wildlife Service.

The northern long-eared bat was named a federally threatened species last year, which means the quarter-ounce mammal now has a sizable say in what happens in the manmade caves near 10th and High streets.

And it will alter some of the plans Podwinski had for Robbers Cave, around which he is building Blue Blood’s 12,000-square-foot brewery, restaurant and taproom. But not too much, he said: The business still intends to offer tours and hold special events deep inside the Lincoln landmark, although a section will now be off-limits.

With the brewery approaching its April opening, Podwinski sought an expert to visit the 500 feet of sandstone tunnels, originally excavated for storage but used for decades as a tourist attraction.

The cave had been closed for years, although apparently not tight enough to keep out bats seeking places to hibernate, said Cliff Lemen, the retired bat biologist who visited the cave in January.

“Bats are pretty good at getting in small places,” he said. “And in general, the northern long-eared bat is fairly secretive. They like to get in cracks and crevasses.”

Still, Lemen identified at least two of the bats, whose long ears help them stand out. The species is common, with a range covering 38 states. But it’s also under attack by a fungal disease known as white-nose syndrome.

The bat’s numbers have dropped dramatically since 2006, when the disease’s symptoms were first noticed in New York. White-nose syndrome has since spread to 26 states, and the fungus that causes it was documented in Nebraska last year.

By some estimates, the syndrome has killed more than 5.5 million northern long-eared bats, prompting its listing as a threatened species in April 2015.

After finding the long-eared bats in Robbers Cave, Lemen told Podwinski they needed to contact the Fish and Wildlife Service.

Harms, the federal biologist, knew he would eventually take a call about long-eared bats and federal protection, but he expected to be summoned to eastern Nebraska, where limestone mines near Weeping Water and Louisville have traditionally housed hibernating bats.

“I never dreamed it would be a mine that was associated with a microbrewery in Lincoln,” he said. “It’s hard to say how many bats are in that cave, but for us, one is enough to have concerns.”

Harms visited Robbers Cave late last month and came up with a plan for Podwinski.

First, Blue Blood had created another cave entrance, and that was lowering the temperature too much for the bats.

“You don’t want the bats to get cold because they wake up. They only have a certain amount of energy, and if they use that energy, they can’t make it through the wintertime and they die,” Harms said.

He asked that the new entrance be sealed, and when that didn’t raise the temperature, he asked Podwinski to try warming it with space heaters. That didn’t work either, so they plan to use fans to blow this week’s higher temps through the cave.

He also told Podwinski to stay out of the cave until March 11, the general end of hibernation. Human interaction doesn’t threaten the bats as much once they’re awake and roosting and coming and going.

That’s fine with Podwinski. He had planned some work in the cave before then, but it can wait, he said.

And Harms will work with Blue Blood on its plans to designate a corner of the cave as bat habitat, closed to the public. Podwinski identified a dead-end tunnel that has a manhole-covered opening at the surface, allowing the bats to get in and out.

He hopes to incorporate that into the tours, maybe by adding a screen or piece of Plexiglas so visitors can see the bats.

“It just so happened it’s going to work out well,” he said. “It adds to the whole experience.”

In his plan to visit more than 400 national park sites during a three-year road trip, Mikah Meyer will start simply and close to home.

Historic stop on Detroit-Lincoln-Denver Highway yours for $2,150 a month

The dozen toilets disappeared decades ago.

A music teacher, a well-traveled trumpet, and Doc Severinsen's signature

If John Ulrich’s trumpet wasn’t the best in the band, it was always the prettiest -- a shock of shiny silver in all that brass.

The newspaper editor first saw the burning building in a photo when a friend sent a text message early Sunday morning.

For a man who overcame pre-construction delays and finding federally protected bats in the cave below his brewery, a little road construction …

Blue Blood's a place for beer AND food

Lincoln's bat woman honored with species named for her

She’s never met her namesake, at least not alive.

The northern long-eared bat was listed as a threatened species last year. The species was found hibernating in Lincoln's Robbers Cave.

Blue Blood Brewery will use a dead-end tunnel with a shaft leading to the surface as designated bat habitat in Robbers Cave.