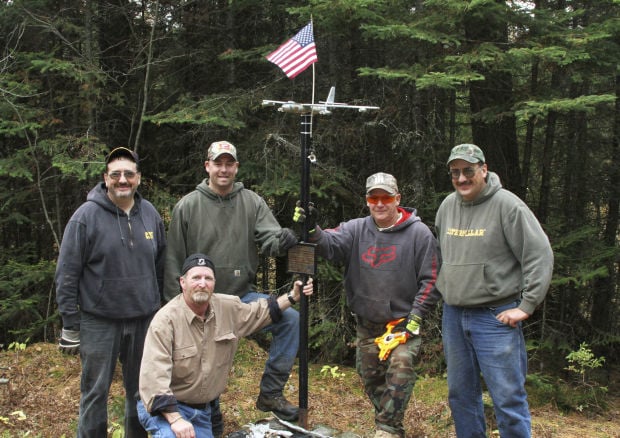 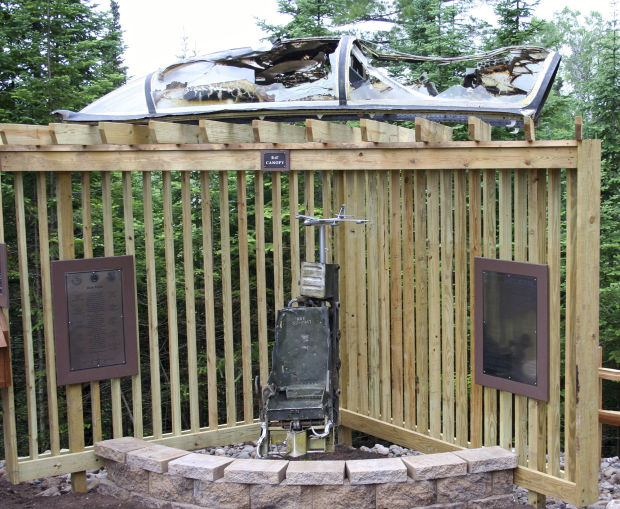 The memorial to the two B-47 crashes in the Wisconsin woods includes a seat and canopy from the downed bombers.

In 1961, a pair of B-47 bombers flying training missions out of Kansas crashed in the woods of northern Wisconsin. Decades later, a group of volunteers has spent thousands of hours -- and thousands of dollars -- making sure the men who died in those planes are never forgotten.

The big jets would approach fast and low, 1,200 feet above the treetops in far northern Wisconsin, before lobbing their fake bombs and soaring up, and away.

They were training for a Cold War battle with the Soviets, and they were a long way from their base near Topeka, Kansas. So night after night, after the B-47s practiced navigation exercises, gunnery drills, mid-flight refueling, high-level bombings and, finally, these low-level runs over the trees, they’d turn 180 degrees over Michigan’s Upper Peninsula and begin their 900-mile flights home.

On Feb. 24, a B-47 crashed in a marsh near Hurley, Wisconsin, killing all four crew members.

Ten weeks later and just four miles away, the forest swallowed another B-47 from Topeka, killing two crew members -- including a young father from Nebraska, Capt. Dale Rasmussen.

That day would haunt two boys, for two different reasons.

In Wisconsin, Greg Landretti had learned to listen for the roar of the bombers.

“You’re up there in the middle of the north woods,” he said. “I was 11 years old and it was a big event for me, being a little kid.”

In Nebraska, 5-year-old Darrell Rasmussen was at his grandfather’s filling station along U.S. 6 in Exeter when he learned his father was gone. He can still see his grandmother trying hard not to break.

“I can remember the day like it was yesterday,” said Rasmussen, a captain with the York Fire Department. “We’d always be at the gas station, but I remember this day was different.”

The two boys would spend decades, separately, trying to unravel the story behind the doomed May 2, 1961, flight. Then they would meet, first a decade ago and again late last month, at a ceremony that would leave the son from Nebraska speechless, choking back tears, and grateful for strangers in Wisconsin who cared so much for his father.

He has a few memories of his dad.

“Just little things,” he said, “here and there.”

Like playing football, his father telling him he’d be a quarterback one day. Or his father shoveling snow, the son begging to be scooped up, too, and thrown in the pile.

“I remember him being a nice guy. You see people, they dread seeing their parents. We never had that problem.”

Dale Rasmussen had grown up on a farm near Exeter, but he didn’t stick around.

“He wanted to fly airplanes,” said his widow, Peg, a high school classmate. “He went in as an enlisted man and he went through pilot training and became a pilot.”

The Air Force took them to Texas, and then to Salina, Kansas, and finally to Forbes Air Force Base near Topeka. In late April 1961, Peg and Dale’s parents all drove down from Exeter to celebrate the birthdays of Linda, who turned 1, and David, who was turning 3.

They returned to Nebraska a few days later with their grandsons.

On May 1, Capt. Rasmussen was tapped to join a B-47 crew on a training run as an instructor, to evaluate the performances of the pilot and co-pilot. The 29-year-old had already logged more than 3,000 flying hours, with nearly a third of those in a B-47.

He was an extra crewmember on that flight, so he sat on the steps in the aircraft’s aisle; the other three men strapped themselves into their ejection seats.

The flight, code-named Elgin 35, took off for its training flight above the upper Midwest just after 8 p.m., joined by two other B-47 bombers. They were scheduled to return in about eight hours.

Elgin 35 refueled somewhere above Kansas and Iowa, banked north toward Minnesota and then descended for its last drill, the low-level bombing practice above Wisconsin.

The Air Force lost contact with it just before 2 a.m.

A few hours later in Kansas, Peg heard a knock at her door.

The boy from Wisconsin grew up and moved away, but Greg Landretti couldn’t shake the memory of the bombers that disappeared near his little town. So about 20 years ago, he started looking into the crashes, the crews, the causes. He didn't stop.

“I went through a lot of newspapers. I did a lot of digging, a lot of research.”

He tracked down family members, searched for military records and found the crash sites, ultimately gathering enough material to fill a book he hopes to soon publish.

“I think it’s important to find out what actually happened. The pursuit for me was to try to figure out what the truth was.”

At the end of the low-level run, just after releasing its imaginary payload, the B-47 was supposed to climb fast and steep away from the blast zone -- “to get out of Dodge.”

But as Elgin 35 ascended, its red flashing lights bounced off the clouds, giving the pilot vertigo, Landretti said. The pilot panicked and pushed the yoke forward, putting the plane into a dive. The co-pilot tried pulling it back, and the two struggled for control.

Then the navigator ejected. The pilot followed.

But the co-pilot and Capt. Rasmussen went down with their plane.

In Nebraska, Darrell Rasmussen had grown up hungry for information about the crash that took his father.

“As soon as I got a computer and got on the internet, I was always researching that,” he said.

About a decade ago, he found a note online from Landretti. They talked at length that night, and Darrell Rasmussen eventually visited northern Wisconsin.

Landretti had already made a small memorial, a B-47 model he’d shaped out of steel, attached to a pole and planted in the ground.

For the first time, the son stood on the same piece of land where his father had died.

“It was what I’d been looking for,” he said, thinking about that moment a decade later. “It wasn’t any relief. I guess I can’t put into words what it was.”

Last year, another stranger was leading his group of ATV-riding friends -- most of them former military, like himself -- through the trails around Hurley.

Curt Myers showed them the crash site of Elgin 35, and Landretti’s homemade memorial.

He told them about his plans to improve the site. Someday, he said.

They formed a volunteer group. They sent out 250 letters -- to VFW posts, Legion clubs, businesses -- sharing their plans and asking for donations.

They eventually collected more than $20,000 in cash and donated services and supplies. They changed their plans repeatedly to reflect their bigger budget: From one flag pole to three. They added solar lights. They added a pair of benches, a 10-foot-by-10-foot canopy, a 3-foot retaining wall.

When they started the real work this spring, they had to clear 2 feet of snow from the site. And by the time they finished, they were under assault by the heaviest horse flies, deer flies, mosquitoes and gnats he’d seen in 20 years.

They sat down recently and added up all their time. They’d spent more than 2,000 hours building a memorial to men they’d never met. And they were happy to help.

“I’m a retired Army guy. All my friends are retired Army,” he said. “These guys, they sacrificed their lives for us. It’s just a nice thing to do for them.”

They all came together late last month in Hurley.

Landretti, the Wisconsin boy who had built the first monument and had written the book on the crashes. His friend, Bruce Jackson, who had kept his eye on the site for years.

Myers and his group of volunteers, who spent much of their spring making it bigger and better.

And 28 grateful relatives of Capt. Rasmussen, most of them from Nebraska.

Peg McKitterick, who had later married the navigator from Dale Rasmussen’s regular crew, was stunned by what she found in the woods.

“I thought it was beautiful,” she said, pausing. “It’s just really great somebody would do this.”

And nearly a month later, Darrell Rasmussen still struggles getting the words out. He is thankful. He is humbled. He is honored.

“Those guys, they went to a lot of work.”

To donate to the memorial

HURLEY, WIS -- Two airmen were killed and two other parachuted to safety Tuesday as an Air Force B47 plunged to earth and exploded in Wisconsi…

The memorial to the two B-47 crashes in the Wisconsin woods includes a seat and canopy from the downed bombers.