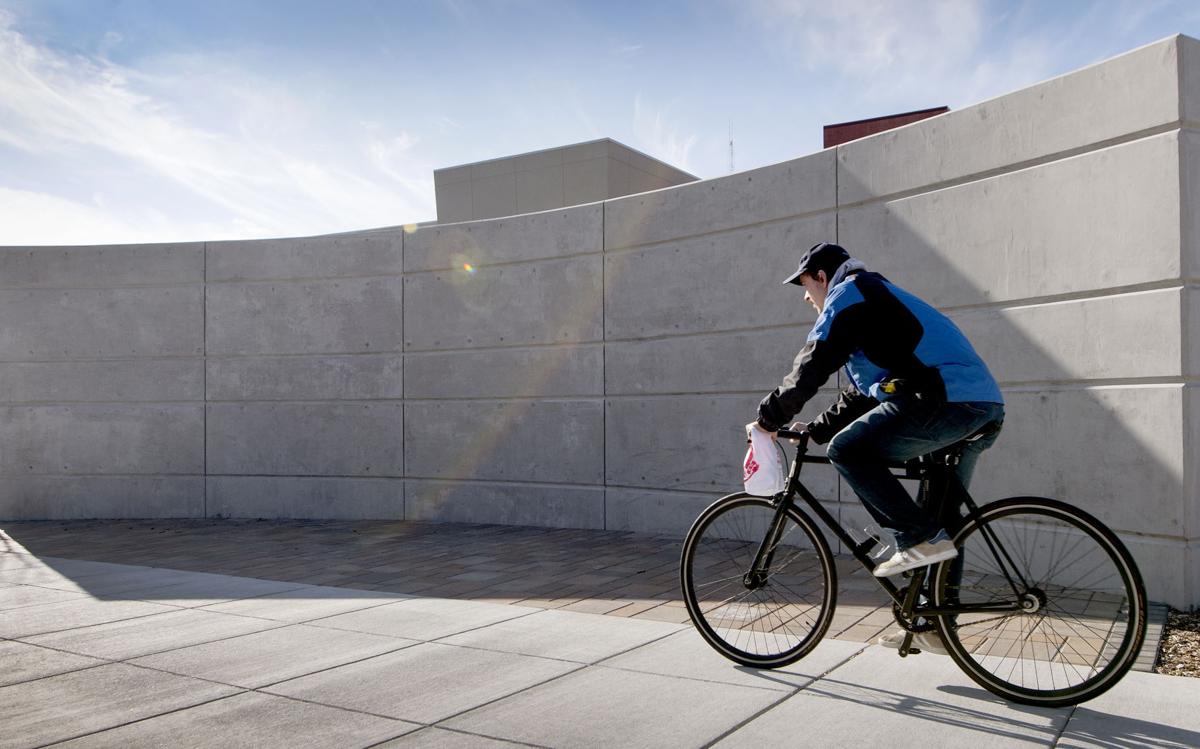 A bicyclist rushes past a 10-foot concrete wall Thursday that has been installed as the backdrop for a future sculpture of Ponca Chief Standing Bear on Centennial Mall just north of P Street. 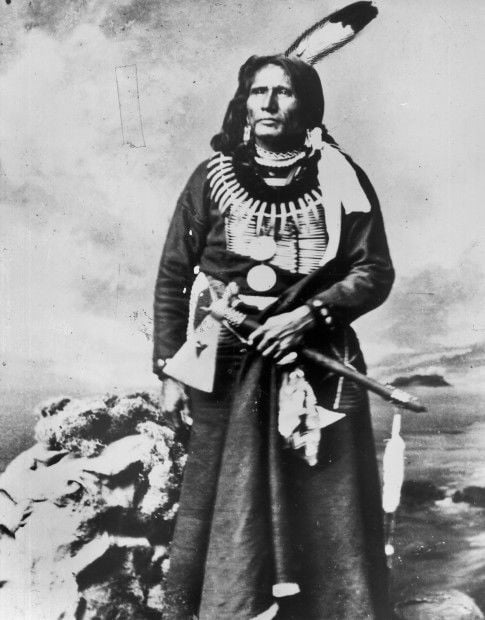 Ponca Chief Standing Bear was part of a landmark case that helped determine the rights of Natives and was the first Native admitted to the Nebraska Hall of Fame.

Standing Bear could soon make a larger-than-life appearance on a stretch of the renovated Centennial Mall.

A 9-foot sculpture of the renowned Ponca chief, being eyed for an alcove on the mall between P and Q streets, would rival the State Capitol's bronze Abraham Lincoln in stature.

A private donor has agreed to foot the bill for the sculpture, which would face Andersen Hall, home of the University of Nebraska-Lincoln College of Journalism and Mass Communications.

The proposal, still in its early stages, drew nods of approval Thursday from members of the Nebraska Capitol Environs Commission.

"I think, by now, Standing Bear has become embraced and respected as a human rights leader that preceded Martin Luther King," said Judi gaiashkibos, director of the Nebraska Commission on Indian Affairs.

In 1877, Standing Bear led his people on a march to Oklahoma after the federal government forced them from their homeland in northeast Nebraska. He later returned to Nebraska to honor his dying son’s wish to be buried along the Niobrara River and was captured by the Army.

He was allowed to fight for his freedom in court, and his 1879 trial led to him becoming the first Native to be legally recognized as a person.

Don Campbell, whose family owned Lincoln's Miller & Paine department store, offered to pay for a statue honoring Standing Bear about two years ago, said gaiashkibos, who is coordinating the project.

She also selected the artist, Ben Victor, a professor of practice at Boise State University who has two pieces in the U.S. Capitol's National Statuary Hall Collection. His piece titled "The Victor" depicts a football player and was installed at Peru State College last year.

There's no design yet for the Standing Bear sculpture, but gaiashkibos said her hope is to have it installed in time for Nebraska's sesquicentennial festivities next fall.

The piece would be about the same height as the Lincoln sculpture on the west side of the Capitol, but Lincoln sits on a much higher pedestal. Standing Bear would be at most a few feet off the ground.

“There’s not a 400-foot building behind it," said Ed Zimmer, historic preservation planner for the city of Lincoln, who is also helping with the project.

Still, Standing Bear would be tall enough to require adding height to the existing alcove between P and Q.

That wall would feature his famous "I am a man" quote, and an adjacent alcove might feature plaques telling the story of Standing Bear.

The hope is to make the Standing Bear sculpture a gathering place much like Lincoln outside the Capitol, gaiashkibos said.

"We want it to be what Lincoln is ... where people come to raise awareness about issues," she said.

"Whether that's things at Standing Rock or Whiteclay or someone announcing they're running for state senator. We want this to be a gathering place where people can celebrate great moments in our state's history and in people's lives."

Prince Andrew has been stripped of his titles. What happens to them now?

Hundreds gathered Sunday north of the Capitol to celebrate the long-awaited revitalization of the seven-block long Centennial Mall.

Someone took a truck for a spin through a pedestrian-only part of Centennial Mall this weekend, turning the pristine plaza into a mud track a …

Nebraska's Capitol will have a new look by the time the state celebrates its 150th birthday next year, and party planners hope to bring the fe…

The history of the American West is one seen, by and large, through the eyes of men.

Nebraskans will have four new ways to celebrate the state's 150th anniversary in 2017.

The list of merchandise celebrating Nebraska’s 150 years of statehood keeps getting longer.

Nebraska would replace Columbus Day with Standing Bear and Indigenous Leaders' Day under a bill introduced Tuesday in the state Legislature.

In 1859, Abraham Lincoln gazed over what would become Nebraska's eastern edge. Overlooking the Missouri River from the Council Bluffs side, he…

Ben Victor drove from Boise, Idaho, to Lincoln last week, pulling a trailer behind his pickup truck. Inside the trailer, an 11-foot-tall sculp…

A bicyclist rushes past a 10-foot concrete wall Thursday that has been installed as the backdrop for a future sculpture of Ponca Chief Standing Bear on Centennial Mall just north of P Street.

Ponca Chief Standing Bear was part of a landmark case that helped determine the rights of Natives and was the first Native admitted to the Nebraska Hall of Fame.